A strategic asset allocation to emerging market equities is important for investors seeking higher growth potential and diversification benefits. The status of many developing economies, however, has changed dramatically since the term “emerging markets” was popularized in the 1990s, and traditional means of accessing them through market capitalization weighted indexes no longer represent an efficient way of achieving the primary goals of growth and diversification. Instead, investors should consider more nuanced strategies that exclude countries trending towards the tail end of their breakout growth cycles (the BRICs, South Korea and Taiwan), while including exposure to frontier markets that are better positioned for breakout growth and have lower correlations to developed markets.

The Landscape Has Changed

In the 1990’s and 2000’s the big four emerging market economies (the BRICs: Brazil, Russia, India and China) underwent transformational reforms to liberalize their economies. As a result, these countries began to more efficiently utilize their abundant cheap labor or natural resources, generating over a decade of extraordinary growth rates. The situation is vastly different in 2015, as three out of four of these economies have started to stall. Brazil and Russia are mired in recessions caused primarily by falling commodity prices and rising inflation1,2. China’s formula of cheap labor and investment in fixed assets has reached a point of diminishing returns and their economy is now growing at its slowest pace since 20093. India remains the lone bright spot out of the four BRICs with enviable moderate inflation and high growth rates4. Two other major emerging market countries, South Korea and Taiwan, are experiencing positive growth rates, but are cutting growth forecasts and have settled into slower long-term growth rates akin to developed markets5,6. Long-term outlook for the bloc suggests that the era of sustained high growth rates for the largest emerging markets is coming to an end as aging populations and rising labor costs will present meaningful headwinds for future growth7. 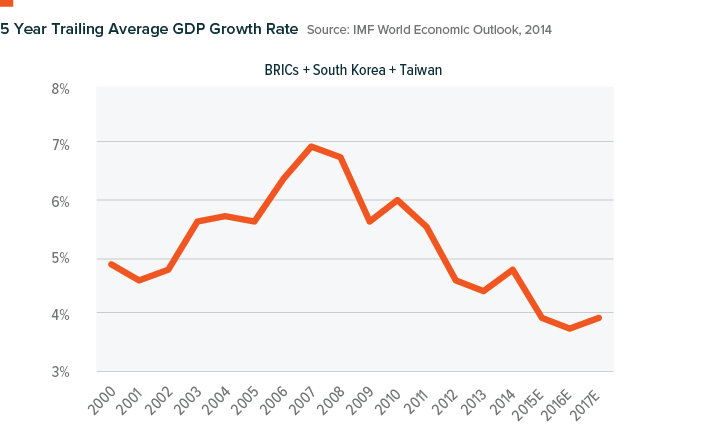 A fundamental issue with cap-weighted indexes is that they are inherently backward-looking; they allocate the greatest weights to countries that have already experienced the most growth. In 2000, the BRICs, South Korea and Taiwan, accounted for 46% of the MSCI Emerging Markets index. Fifteen years of robust growth later, that same group of countries now represents 70% of the index. 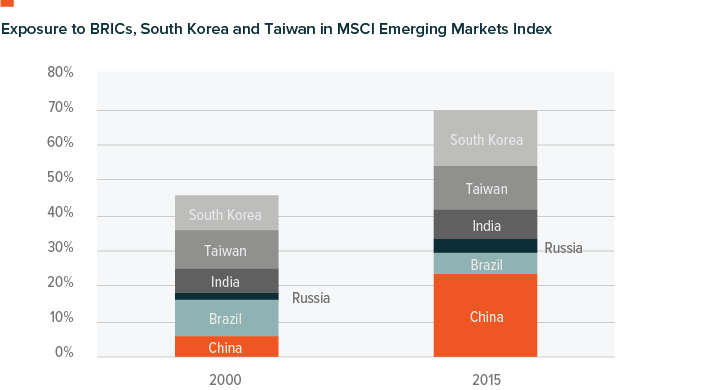 While the BRICs, South Korea and Taiwan are not quite ready to graduate to developed market status, we do not believe that these economies are still among the best positioned to experience rapid economic growth over the next decade. Instead, we believe candidates for the next wave of breakout growth are likely the less developed segment of emerging markets, as well as frontier nations that have younger and cheaper labor forces, lower fixed asset bases, and less existing integration with global markets.

Investors must consider a more nuanced approach to accessing the emerging markets – one that addresses the inherent flaws in market-cap weighted indexes and prioritizes the goals of high growth potential and diversification. The following are four suggestions that could result in an improved strategy for investing the emerging markets.

1. Exposure to the BRICs, South Korea and Taiwan should be either excluded, constrained, or addressed through tactical sector allocations, such as targeting the emerging middle class consumers in these markets. We believe these countries are at the tail end of their major economic growth cycles and are unlikely to maintain high long term growth rates in the future.

2. Frontier markets should be included with emerging markets as these economies provide some of the best opportunities for growth and diversification in the world. By combing the two groups together, one could benefit from the higher liquidity of the emerging markets, while accessing the lower correlations and more attractive demographics exhibited by frontier markets. 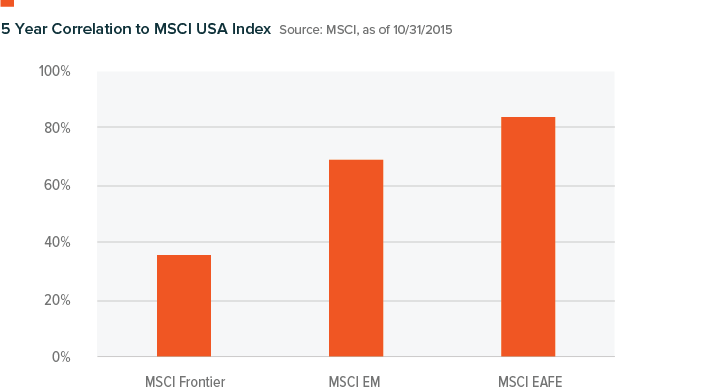 3. Sector exposures should be capped as emerging and frontier market indexes tend to heavily overweight Financials. Developed market indexes have a 21% allocation to Financials, but emerging markets have a 29% exposure to the sector and frontier markets a 53% weighting to Financials8. Capping sector weights can help limit exposure to events like changing interest rates or volatile currencies.

4. Slower-growth regions that are classified as “emerging or “frontier” for the wrong reasons should be constrained or excluded. Two key factors considered by major index providers MSCI and FTSE for determining a country’s market classification are its level of economic development and the accessibility of its capital markets by foreign investors9. Some countries, such as Kuwait, have relatively high levels of economic development, but less accessible capital markets, resulting in its classification as a frontier market. Countries like this tend to receive large weightings in market cap weighted indexes, but we believe are not consistent with the higher growth potential of other frontier and emerging economies.

Global X offers the Next Emerging & Frontier ETF (EMFM), which tracks an index designed to provide broad exposure to the emerging and frontier countries best positioned for future growth and exhibiting low correlations to developed markets.

Investing involves risk, including possible loss of principal. International investing may involve risk of capital loss from unfavorable fluctuations in currency values, from differences in generally accepted accounting principles, or from economic or political instability in other nations. Emerging markets involve heightened risks related to the same factors as well as increased volatility and lower trading volume. Frontier markets generally have less developed capital markets than traditional emerging market countries, and, consequently, the risks of investing in foreign securities are magnified in such countries. These countries are subject to potentially significant political, social and economic instability, which could materially and adversely affect the companies in which the Fund may invest. The Fund invests in securities and markets that are susceptible to fluctuations in certain commodity markets. Commodities represent a significant portion of the Latin American and Middle Eastern economies. Any negative changes in commodity markets could have a great impact on these economies. Unlike most exchange-traded funds, the Fund intends to effect all creations and redemptions partially for cash, rather than in-kind securities. As a result, an investment in the Fund may be less tax-efficient than an investment in a more conventional ETF. Diversification does not prevent all investment loss.

The information presented here is for informational purposes only. It was prepared on information and sources that we believe to be reliable, but we make no representations or guarantees as to the accuracy or the completeness of the information contained herein.

Carefully consider the Funds’ investment objectives, risk factors, charges and expenses before investing. This and additional information can be found in the Funds’ prospectus, which may be obtained by calling 1-888-GX-FUND-1 (1.888.493.8631), or by visiting www.globalxetfs.com. Read the prospectus carefully before investing.