Lithium demand projections continued to strengthen in December 2017 with new megafactory announcements and original equipment manufacturer (OEM) partnerships boosting the long-term outlook, and a rush on new energy vehicle production in China enhancing short-term prospects. In November 2017 China produced a record number of EVs – over 30% higher than any previous month on record – and the government’s decision to extend subsidies for another three years is expected to see further substantial production increases in 2018. Despite these pressures, lithium prices remained relatively stable throughout December due to the continued introduction of new supplies from Chinese conversion facilities.

The Chinese market, which has led the way in price rises over the past two years, stabilized somewhat as pressures eased on lithium carbonate supplies. Cost Insurance & Freight (CIF) prices for lithium carbonate into Asia subsequently fell by 1% over the month. With additional new feedstock supplies expected to reach the Chinese market throughout 2018, the ability of converters to ramp up battery-grade processing capacities will have a major bearing on prices entering the new year. In addition to the expected increase in supplies from Greenbushes, Mt Cattlin, Mt Marion and Wodgina in Western Australia, specialty mineral producer AMG NV announced plans to increase lithium concentrate supply from its Mibra Tantalum mine in Brazil.

With mechanical completion at the project due by April, the company is targeting first production by June 2018, ahead of a ramp-up towards a 90,000 tonnes per annum (tpa) capacity. The additional investment is aiming to take this to 180,000 tpa by 2019, the majority of which will be sold to an unnamed offtake partner. While new feedstock will see increased Chinese production, limited volumes will be exported meaning other countries targeting rapid expansions in lithium ion battery capacity will have to strengthen supply chains. Concerns over raw material dependence saw US President Trump sign an executive order in December aimed at reducing critical mineral reliance. This could have positive implications for new mining projects in the US. 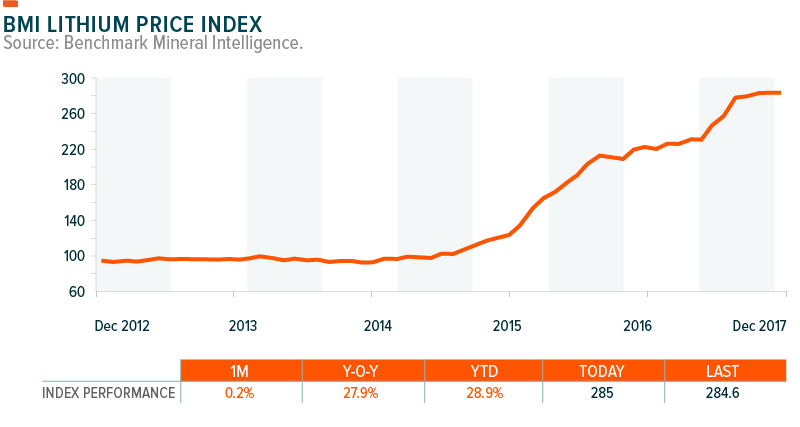 Benchmark’s Cost Insurance and Freight (CIF) Asia lithium carbonate price slipped to an average of $20,750/tonne in December, down from a peak of $21,500/tonne in October 2017 when the upper-end of the price range had reached $25,000/tonne.

Although an easing of pressures at the upper-end of price ranges saw a marginal decrease in average prices in Asia, prices into other regions which are typically agreed on a longer-term basis were robust as the gradual shift towards Asian price levels continued. The CIF price of lithium carbonate into North America climbed 0.8% on average in December, while Free On Board (FOB) prices out of South America were stable at $14,000/tonne.

Moving into 2018, increased volumes will be shipped at new contract rates which is expected to see prices into Europe and North America continue their trend towards the upper end of current price levels. 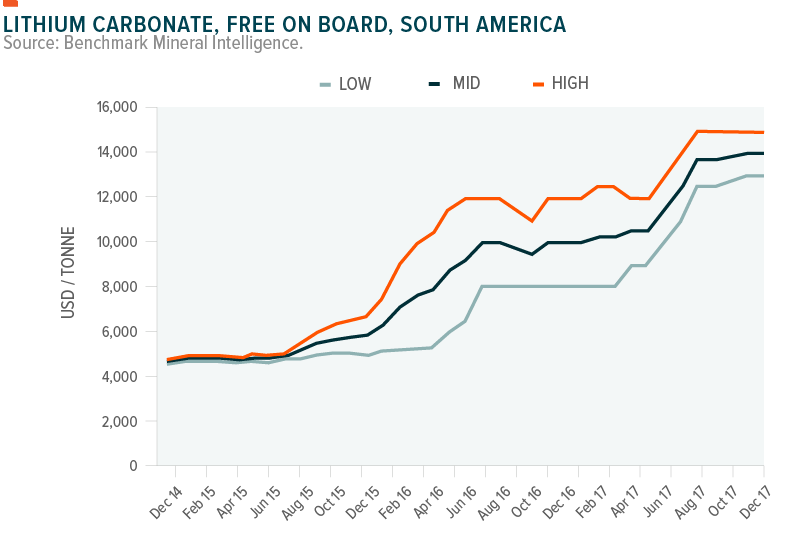 The introduction of new lithium hydroxide supplies throughout H2 2017 failed to see a major decrease in price levels, particularly in the Asia market where there were marginal gains in prices throughout December.

Ex Works (EXW) China prices climbed 2% while average CIF prices into Asia were up just over 1%, finishing the year $20,500/tonne, their highest point since September.

While sales at significant premiums have been less frequent in 2017 – limiting the higher-end of price ranges – new longer-term agreements have been agreed at slight increases throughout the year, seeing few low price transactions.

With robust prices into Asian consumers, North American suppliers have gradually increased their offers and increased inquiries approaching the end of the year saw a 0.8% increase in average FOB prices out of the region.

Based on our analysis and expectations, new feedstock supplies into Chinese conversion facilities could see hydroxide prices settle at a slightly lower levels in 2018, however the slowdown in Chinese production approaching the country’s Spring Festival is likely to see robust pricing in Q1. 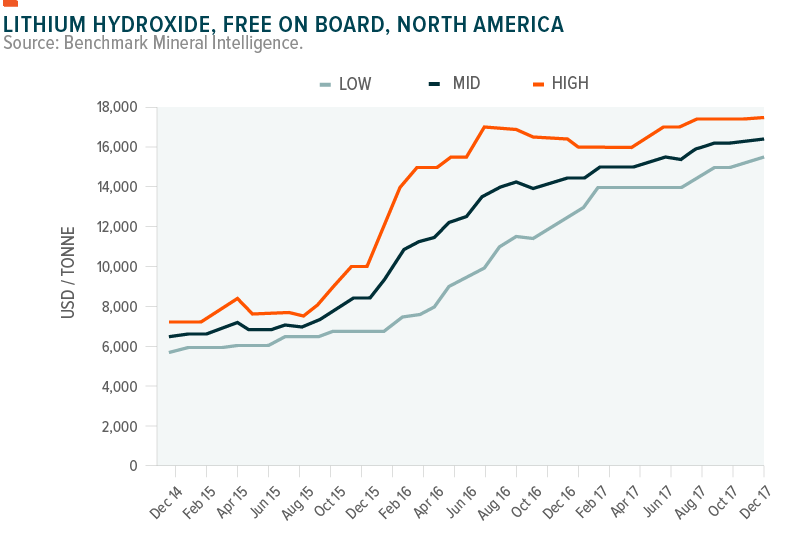 Feedstock: Prospects for new feedstock supplies were strengthened once more in December with the news that AMG NV was looking to double lithium concentrate production from its Mibra mine in Brazil by 2019. The company is targeting first production from its new 90,000 tpa lithium facility by June 2018, with concentrate volumes destined for an unnamed offtake partner. Elsewhere, Pilbara Minerals2 signed another offtake agreement for the sale Direct Ship Lithium Ore (DSO) to Australian iron ore company Atlas Iron Ltd, with the subsequent concentrate expected to be sold into the Chinese market.

Carbonate: Lithium carbonate production is estimated to have fallen marginally in December with slower production rates in China and Chile. Increased feedstock supplies into Chinese conversion facilities throughout 2017 have seen a gradual increase in chemical output, however not all of this new raw material has yet been converted. With new raw material supplies expected to emerge through 2018, there is the potential for a shortfall in battery grade carbonate production, particularly with the growing trend towards NCM cathode technologies which is likely to continue into the new year.

Hydroxide: Lithium hydroxide production is estimated to have risen marginally in December with increased conversion volumes being reported out of China. While the country remains the primary lithium hydroxide producer and is expected to further increase production in 2018, industry majors outside of China are also targeting increased output by the end of 2018. Initial production from Tianqi Lithium’s Kwinana facility is scheduled for late-2018 while SQM is aiming to more than double production from Antofagasta by the same time. While this increases long-term supply prospects, conversion capacity will continue to hinge on the ability of Chinese processors to produce significantly larger volumes of battery-grade hydroxide from the new spodumene feedstocks.

Lithium feedstock: This refers to lithium concentrate, the majority of which is converted into lithium chemicals for a wide range of end markets including lithium ion batteries.

Lithium chemicals: This refers to any downstream chemicals that are produced from spodumene feedstock or lithium brine. For the purposes of this report, it will refer to the general trend of lithium carbonate and hydroxide; any other chemicals will be specifically cited.

Lithium carbonate: the primary base chemical produced by the lithium industry used in a wide range of end markets including lithium ion battery cathodes, ceramics and glass, and pharmaceuticals.

Lithium hydroxide: the second largest chemical produced by the lithium industry, traditionally used in the production of greases but also competes with lithium carbonate in the lithium ion cathode sector, specifically NCA chemistry.

Free on Board: a trade term that indicates whether the buyer or sell is liable for damaged goods during shipping.

Cost Insurance and Freight: a term indicating that a seller must pay the costs of freight and insurance to the destination, but risk is transferred to the buyer as soon as the goods are on the ship.

Ex Works: a term where the seller makes a good available at a specific location, but the buyer pays transportation costs.

This material represents an assessment of the market environment at a specific point in time and is not intended to be a forecast of future events, or a guarantee of future results.  This information should not be relied upon by the reader as research or investment advice and is intended for educational purposes only.

Unauthorized distribution of this information in any form constitutes a violation of copyright law and may result in legal action being brought against you or your company. Benchmark Mineral Intelligence Ltd does not provide investment advice.

Investing involves risk, including the possible loss of principal. International investing may involve risk of capital loss from unfavorable fluctuations in currency values, from differences in generally accepted accounting principles, or from economic or political instability in other nations. Emerging markets involve heightened risks related to the same factors as well as increased volatility and lower trading volume. Narrowly focused investments may be subject to higher volatility. There are additional risks associated with investing in Lithium and the Lithium mining industry.

Carefully consider the Fund’s investment objectives, risk factors, charges and expenses before investing. This and additional information can be found in the Fund’s full or summary prospectus, which may be obtained by calling 1-888-GX-FUND-1 (1.888.493.8631), or by visiting www.globalxetfs.com. Read the prospectus carefully before investing.