The Communication Services sector was introduced in September 2018, following changes to the Global Industry Standard Classification System (GICS). The changes included renaming the ‘Telecommunications’(Telecoms) sector as ‘Communication Services’ and broadening its exposure to include firms from the media, entertainment, and interactive media & services industries. Upon implementation, these changes established a Communication Services sector in equity markets globally, including China. This sector is one of the largest by market cap in China, and is widely viewed as a long-term, high-growth play that seems well-positioned to benefit from China’s trends of rising consumption and technological prowess.

In this piece, we take an in-depth look at the key stats, notable companies, and thematic tailwinds affecting this sector.

Communication Services ranks as the third largest GICS sector in China by market cap, which is similar to its fourth-place ranking in the US. The largest industry group within the sector, making up over 37%, is Interactive Media & Service. This industry group consists of many of the country’s most innovative companies, including those running search engines and social media networks. Overall, analysts anticipate that China’s Communication Services will deliver higher revenue growth versus its US counterpart, owing to several thematic tailwinds, including deepening internet penetration, rising wages & consumption, changing consumer habits to favor new technologies, and government support – all of which is discussed in greater detail later in this piece. Despite higher growth expectations, valuations appear cheaper than its US counterpart, across price-to-earnings, price-to-sales, and price-to-book metrics. 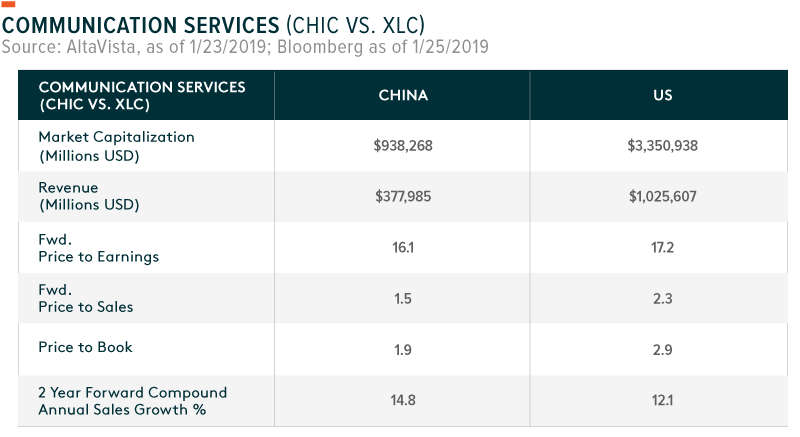 While nearly half of the sector is listed in the United States via ADRs, the recent inclusion of onshore China-listed A shares into MSCI’s indexes greatly broadened foreign investor access to the Communication Services sector in China. Over half of the sector is comprised of A shares, H Shares, P Chips and Red Chips.

China’s Communication Services sector includes a host of innovative internet, social media, streaming, gaming, and telecom companies that have been driving the country’s efforts to become a global technology powerhouse. Given the size of China’s middle class, many of these companies have built among the largest user bases in the world and are often compared to similar well-known firms in the US. The table below shows the top 5 companies by market cap in the Communication Services sector and provides a look at their core businesses and comparable firms in the US.

The Communication Services sector seems well-positioned to benefit from a confluence of powerful tailwinds, happening at the consumer, government, and international levels. 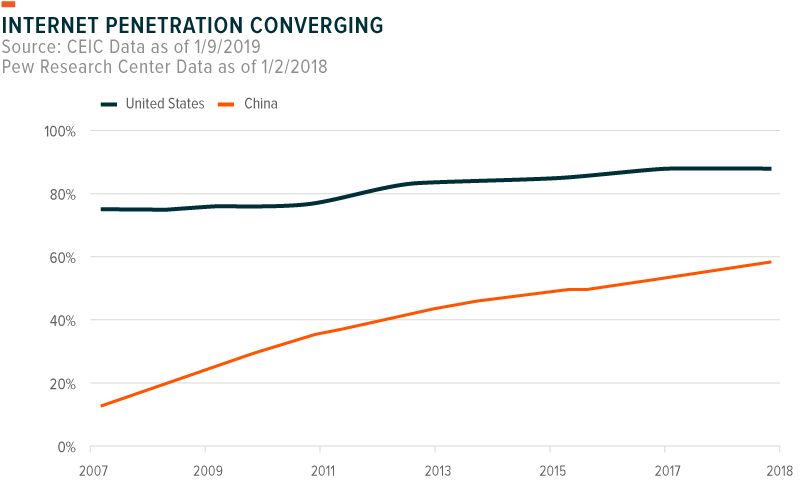 Consumer Preferences Favor Tech: Chinese consumers have demonstrated quick adoption of new technologies. This is reflected in the rapid 4G adoption rates versus 3G, providing the backbone for data-intensive media consumption, mobile payments, and chat features. Part of this adoption speed is due to technology ‘leapfrogging’, which enables developing markets to quickly adopt the latest technology, rather than needing to replace well-entrenched habits or infrastructure. For example, Chinese consumers have leapfrogged credit cards, spending over $15 trillion in mobile payments during 2017, compared to $2 trillion spent in the US or $377 billion five years earlier.4 According to a recent study, China has the highest adoption rate of fintech globally, explaining the rapid growth of mobile payments and e-commerce in China. 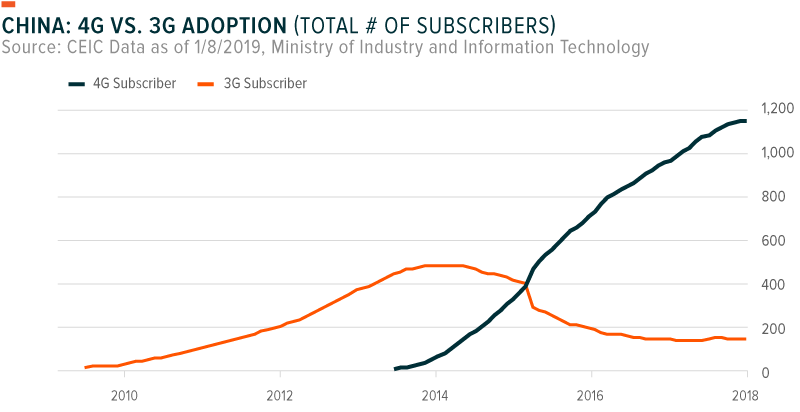 Tencent’s one-stop social media application “WeChat” facilitates around 40% of these mobile payments as of 2017.6 The platform has redefined the entire concept of an app, not only serving as a messaging platform, but also acting as a one-stop substitute for Apple Pay, Venmo, Facebook, Amazon, Uber, and Grubhub, which are blocked by China’s “Great Firewall.” This comprehensive platform allows users to make payments, order food delivery, purchase entertainment tickets, and order rides through one of its million-plus “mini-apps.”7  The rising generation of 400+ million millennials in China, who are the power users of these apps, are also shattering China’s conservative saving mentality. Rather than save a majority of their income as previous generations have, Chinese millennials are earning more and saving less, causing many consumer firms to target their wallets through these apps.8

A common theme among high-growth potential sectors in China is that the government helps accelerate expansion through a variety of supportive policies. For the Communication Services sector, the government has advanced a series of measures supporting its growth, from consumption stimulus to internet infrastructure, technological innovation, and deregulation.

International Expansion: Chinese communications firms often benefit from protections against foreign competition, which helps build their scale in China before competing internationally. Yet given that many have now built substantial scale, international expansion is inevitable. Over the last several years, Chinese game publishers have expanded abroad to fuel additional growth. Through partnerships and acquisitions, they have increased their international presence. Tencent has been especially aggressive, buying stakes in nearly 300 companies across developed and developing markets over the past 6 years, including Indonesia’s e-commerce giant, Shopee, and the US creator of ‘Fortnite’, Epic Games.13 Another firm expanding rapidly across markets is Baidu, which has partnered with Microsoft, Ford and Hyundai on its Apollo Project to develop autonomous driving and AI, as well as most recently with US retailer Walmart to test driverless delivery vans.

China’s Communication Services sector sits at the intersection of a variety of powerful trends, including rising consumption and the development and adoption of advanced technologies like search engines, social media, gaming, and mobile payments. As such, we believe this makes the sector one of the more attractive long-term segments of the Chinese equity markets.

2. Center for Strategic and International Studies (CSIS), China Power Project, as of Jan 25, 2019.

Investing involves risk, including the possible loss of principal. International investments may involve risk of capital loss from unfavorable fluctuation in currency values, from differences in generally accepted accounting principles, or from economic or political instability in other nations. Emerging markets involve heightened risks related to the same factors as well as increased volatility and lower trading volume. Investments in securities in the Technology sector are subject to rapid changes in technology product cycles; rapid product obsolescence; government regulation; and increased competition, both domestically and internationally, including competition from foreign competitors with lower production costs. Technology companies and companies that rely heavily on technology tend to be more volatile than the overall market, and are also heavily dependent on patent and intellectual property rights. Securities focusing on a single country and narrowly focused investments may be subject to higher volatility. CHIC is non-diversified.