For decades, investors have been attracted to China’s impressive growth story. Yet as China’s economy matures, its potential growth opportunities are becoming more narrowly concentrated in specific areas and themes. Among the most powerful are those areas tied to the rising impact of China’s consumers, who have experienced years of high wage growth, migration into cities, and an expansion of internet connectivity. The government has also made consumption a priority as the economy transitions away from export-led industries. As a result, China’s middle class, which is larger than the entire population of the United States, is spending time and money on goods and services, spanning travel and leisure, e-commerce, social media, gaming, and health and wellness. In this piece, we look at how the Global X MSCI China Consumer Discretionary ETF (CHIQ) is positioned to seek to capture this trend.

China’s Consumer Discretionary sector is the country’s largest by total market cap, yet it is still just half the size of its US counterpart. This is despite the fact that China’s population is four times larger than the US’s and is experiencing a rapidly growing middle class, suggesting that the sector is still in its early stages of growth. 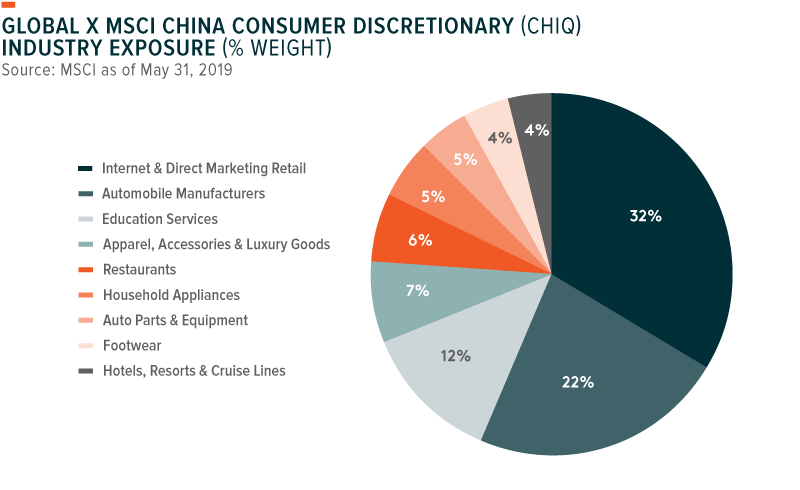 The largest industry group is Internet & Direct Marketing Retail, representing nearly one-third of the sector, followed by Auto Manufacturers, and Education Services. Analysts expect the sector to experience 12% overall sales growth in the next year, compared to just 6% in the US.1 Despite higher growth expectations, the Chinese sector has lower debt burdens and is cheaper across forward price-to-earnings, forward price-to-sales, price-to-book metrics.

While more than half of the sector is listed in the US via ADRs, the recent inclusion of onshore China-listed A shares into MSCI’s indexes broadens foreign investor access to the Consumer Discretionary sector in China.

Consumer Discretionary is one of China’s “new economy” sectors, with only 3% of the sector represented by state-owned enterprises (SOEs). Despite less government ownership, many of the companies in the sector benefitted from recent government policies designed to pivot China from an export-led economy to a consumption-oriented growth model. Accordingly, the sector’s performance and composition differs greatly from old economy sectors like the Energy, Materials, or even Financials sectors, which tend to be more export-oriented and have between 34-40% SOE representation.2

The Consumer Discretionary sector is largely comprised of growth-oriented companies hailing from the e-commerce, automotive, education, and travel & luxury segments. 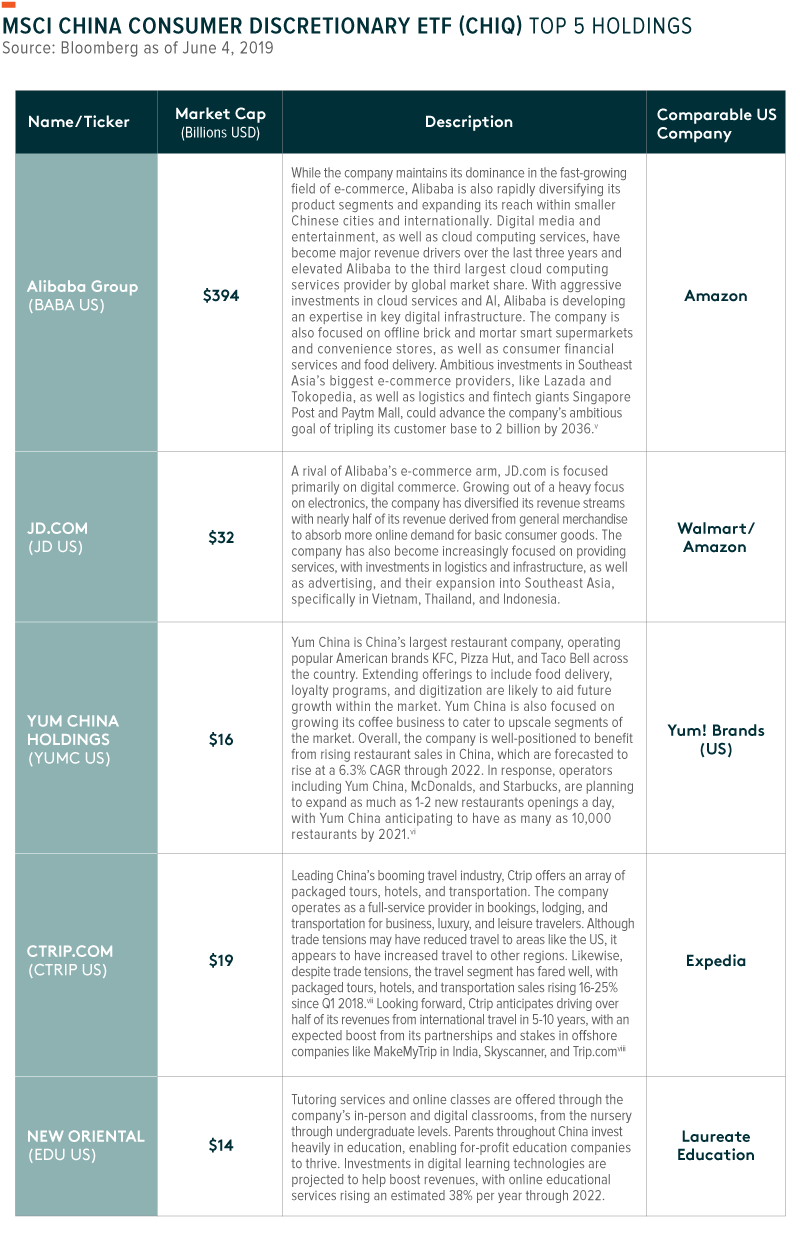 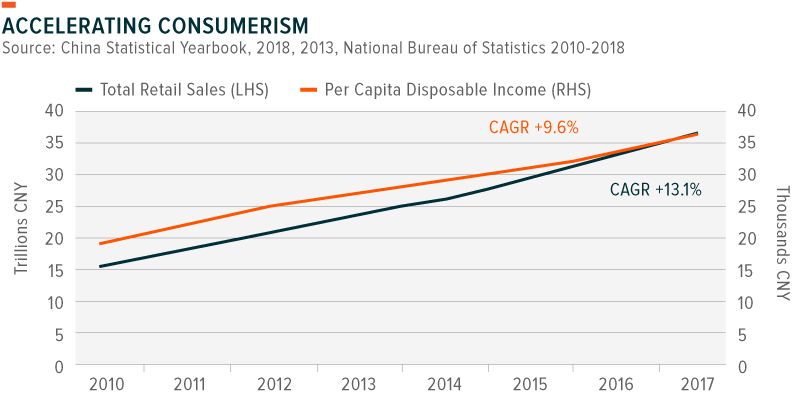 Part of this adoption speed is due to technology ‘leapfrogging’, which enables developing markets to quickly adopt the latest technology, rather than needing to replace well-entrenched habits or infrastructure. For example, Chinese consumers have leapfrogged credit cards, spending over $15 trillion in mobile payments during 2017, compared to $2 trillion spent in the US or $377 billion five years earlier.13 According to a recent study, China has the highest adoption rate of fintech globally, explaining the rapid growth of mobile payments and e-commerce in China. From the e-commerce perspective, data on parcel deliveries globally reflect booming demand for e-commerce with Chinese consumers receiving on average 70 packages a year in Beijing and Shanghai, compared with just 21 on average across the US.14 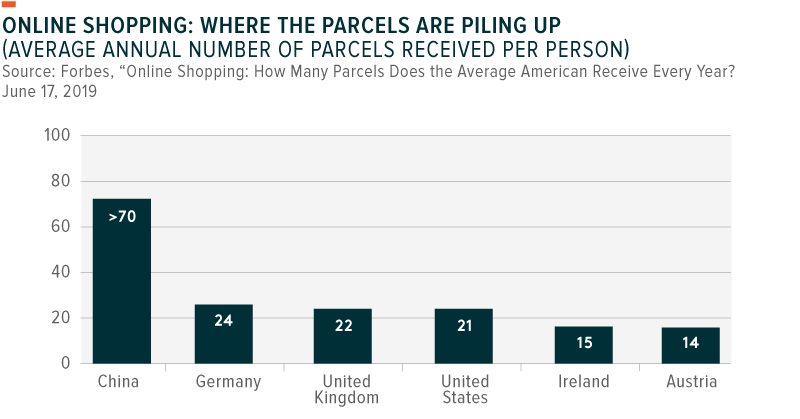 The future of the Consumer Discretionary sector is inherently tied to major macro-economic, demographic, and political trends, which will affect segments like e-commerce, travel, education, and health and wellness. As China transitions to a middle-income economy, the government will increasingly count on the enormous middle class to continue to drive the country’s growth via increasing levels of consumption. Given the size of the consumer base and their unique preferences, we believe domestic firms within the China Consumer Discretionary sector are among the best positioned to benefit from this shift, making an allocation to the sector a potentially attractive way to play this long-term theme.

7. Center for Strategic and International Studies (CSIS), China Power Project, as of Jan 25, 2019.

14. Forbes, “Online Shopping: How Many Parcels Does the Average American Receive Every Year?” Jun 17, 2019.

Investing involves risk, including the possible loss of principal. International investments may involve risk of capital loss from unfavorable fluctuation in currency values, from differences in generally accepted accounting principles, or from economic or political instability in other nations. Emerging markets involve heightened risks related to the same factors as well as increased volatility and lower trading volume. Securities focusing on a single country and narrowly focused investments may be subject to higher volatility. CHIQ is non-diversified.

Carefully consider the Fund’s investment objectives, risks, and charges and expenses before investing. This and additional information can be found in the Fund’s summary or full prospectus, which may be obtained by calling 1-888-GX-FUND-1 (1.888.493.8631), or by visiting globalxfunds.com. Please read the prospectus carefully before investing.