As the fifth installment in an ongoing series that explores the 11 major economic sectors in China, this piece provides an in-depth look at the key stats, notable companies, and thematic tailwinds that characterize China’s Consumer Staples sector, tracked by the Global X MSCI China Consumer Staples ETF (CHIS).

Since the 1980’s, China’s population dramatically shifted from a largely rural, agrarian society, to one defined by middle class city dwellers. The profound effects of this shift continue to impact China’s economy today, as citizens’ rising wages drive the formation of new consumption habits to fit their urban lifestyles. One area that exemplifies these changes is the non-discretionary component of Chinese consumer purchases. Rather than depending on one’s own farm or on a local markets for everyday food and goods, Chinese consumers are increasingly turning to stores for manufactured goods like snack foods, beverages, and home supplies. 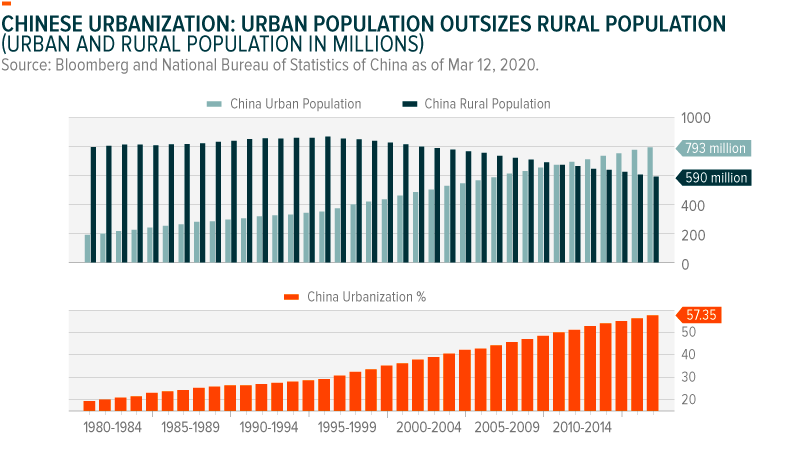 Due to shifting preferences and a growing consumer class, the Consumer Staples sector exemplifies both growth-like and defensive characteristics. Sales growth expectations for the sector are 2.5 times higher than US Staples. Yet last year, Consumer Staples was the best performing sector in China amid an outbreak of swine flu and protracted trade tensions, which truncated supply and initiated a shift towards more defensive assets.1 In the first quarter of 2020, amid unprecedented disruption from COVID-19, Consumer Staples continued to outperform the broad MSCI China Index benchmark, leading it by 7.8% through March 10th.2

China’s Consumer Staples sector experienced rapid growth over the last decade as the economy and middle class expanded. The sector’s total market cap multiplied nearly 10x, from approximately $70 bn in 2010 to more than $700 bn by the end of 2019.3 The sector, however, is still only a third of the size of its US counterpart, which stands at roughly $2.1 tn.4 In addition, Staples represents just 4% of the broad MSCI China Index whereas US Consumer Staples make up approximately 8% of the S&P 500.5 This is all despite the fact that China has a larger middle class than the entire population of the United States.

China’s Consumer Staples sector is largely domestically-focused, which is evident by its high domestic revenue exposure (roughly 98%).6 The sector includes several of the largest companies listed in mainland China, driving A share representation to a high 47%. By comparison, only 16% of the Consumer Discretionary sector is A shares.7 Given the high proportion of A shares, access to the sector for international investors was largely limited until just a few years ago when China democratized access to the onshore equity market via the Stock Connect program and subsequently many of these companies became included in major emerging market indexes.

Less than 1% of the Consumer Staples sector are state-owned enterprises, whereas companies in older sectors like Materials, Energy, Utilities, and Financials, tend to be more export-oriented and have between 34-40% SOE representation.

Recent demand for defensive exposures and strong performance caused valuations for China’s Staples sector to expand. While China’s markets typically trade at a discount to the US, the Consumer Staples sector features valuations that are similar to its US sector counterpart, as demonstrated by price-to-earnings (P/E), price-to-sales (P/S), and forward Price to Sales (Fwd. P/S) multiples.8 China’s Staples sector remains cheaper, however, from a price-to-book (P/B) metric and is projected to experience higher sales growth over the coming year.9

Four major industries make up China’s Consumer Staples sector. Roughly half of the sector is made up of Food Products, a third by the Beverage industry, and nearly 15% split between Personal Products and Foods & Staples Retailing.

Holdings are subject to change 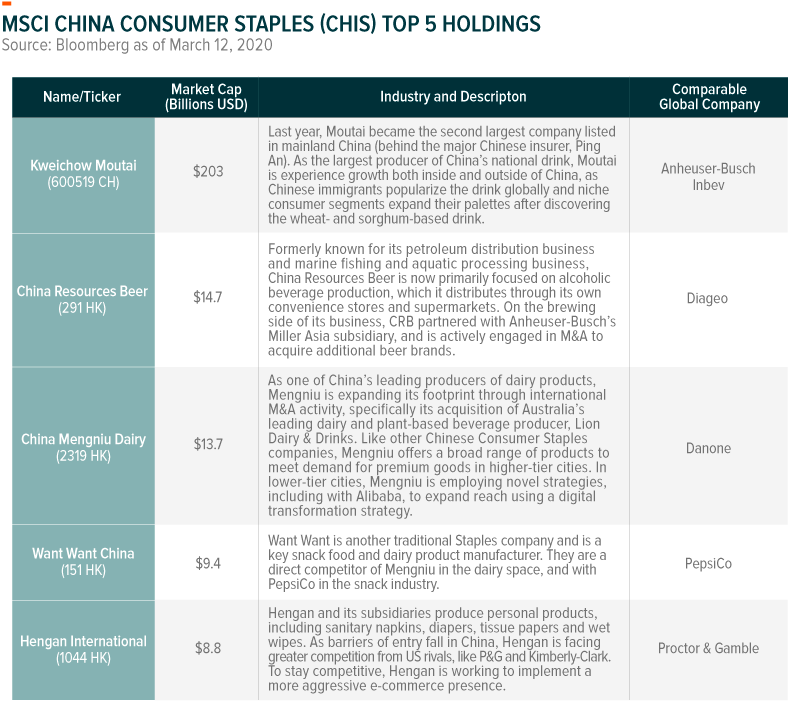 For Top 10 Holdings of CHIS please click here. Holdings are subject to change.

Current and future holdings are subject to risk.

Tailwinds: Despite the destabilizing impact of COVID-19 this year, companies in the Consumer Staples sector remain well-positioned as consumers prioritize buying basic goods. As transmission of the virus decelerates in China, the sector is expected to return to its longer-term growth story, drafting behind growing consumption trends in China.

With the world’s largest population, and second largest economy and equity market, some might expect China’s Consumer Staples sector to be a global leader by market cap. However, the sector is still in its infancy, suggesting substantial future growth potential. As China transitions to a middle-income economy fueled by domestic consumption, Beijing will continue to rely on the country’s enormous middle class to drive growth. Given the size of the consumer base and their distinct preferences, domestic firms within the China Consumer Staples sector are among the best-positioned to potentially benefit from this long-term shift. At the same time, Consumer Staples firms have exhibited more resilience against growth shocks, like global health crises and trade tensions, a defensive element to the sector.

CHIS: The Global X MSCI Consumer Staples ETF seeks to invest in large- and mid-capitalization segments of the MSCI China Index that are classified in the Consumer Staples Sector as per the Global Industry Classification System (GICS).

6. Data from MSCI, on MSCI China Consumer Staples 10-50 Index, as of Feb 28, 2020. According to MSCI: “The economic exposure of a company to a target region or country is the proportion of its revenues coming from that region. As a general principle, MSCI estimates economic exposure from the geographic segment distribution of revenues by final markets/destination as reported by a company and the GDP weight of the countries and regions within a specific geographic segment.” From MSCI, “MSCI Economic Exposure Indexes Methodology,” Jun 2017.

Investing involves risk, including the possible loss of principal. International investments may involve risk of capital loss from unfavorable fluctuation in currency values, from differences in generally accepted accounting principles, or from economic or political instability in other nations. Emerging markets involve heightened risks related to the same factors as well as increased volatility and lower trading volume. Securities focusing on a single country and narrowly focused investments may be subject to higher volatility. CHIS is non-diversified.