China’s Energy sector bears the enormous responsibility of powering the world’s second largest economy and most populous country. As of 2020, China’s primary energy consumption was 1.6 times higher than the United States and 4.5 times higher than India, which are the second and third largest consumers of energy as of July 2021.1 Although energy demand is expected to continue growing, power shortages in Northeast China that grabbed headlines in Q3 and Q4 2021 underscored the transition process the sector is currently experiencing while Beijing refines the Dual Control policy and works towards net-zero emission by 2060. As the government prioritizes stabilizing the economy in 2022 and avoiding a downturn that would adversely impact Energy consumption, certain segments of the Chinese Energy Sector could stand to benefit from oil prices that currently remain at elevated levels.

As the next installment in our ongoing series of the 11 major economic sectors of China, this piece will explore the Energy sector, tracked by the Global X MSCI China Energy ETF (CHIE).

Background of the Energy Sector in China

The distribution of China’s electricity is managed by two mammoth state-owned enterprises, namely the State Grid Corporation of China and China Southern Power Grid Co. This distribution network relies on a mix of coal, natural gas, hydropower, wind energy and solar energy. Throughout China’s economic rise, thermal power was and still remains the primary source of power generation, accounting for roughly 79% of China’s power generation of 2021. However, renewable energy sources are making up more and more of China’s total power generation as Chinese companies become leaders in certain segments of renewable energy; in 2011 solar and wind energy sources made up roughly 2% of total generation, but by 2021 that number expanded to 9%.2 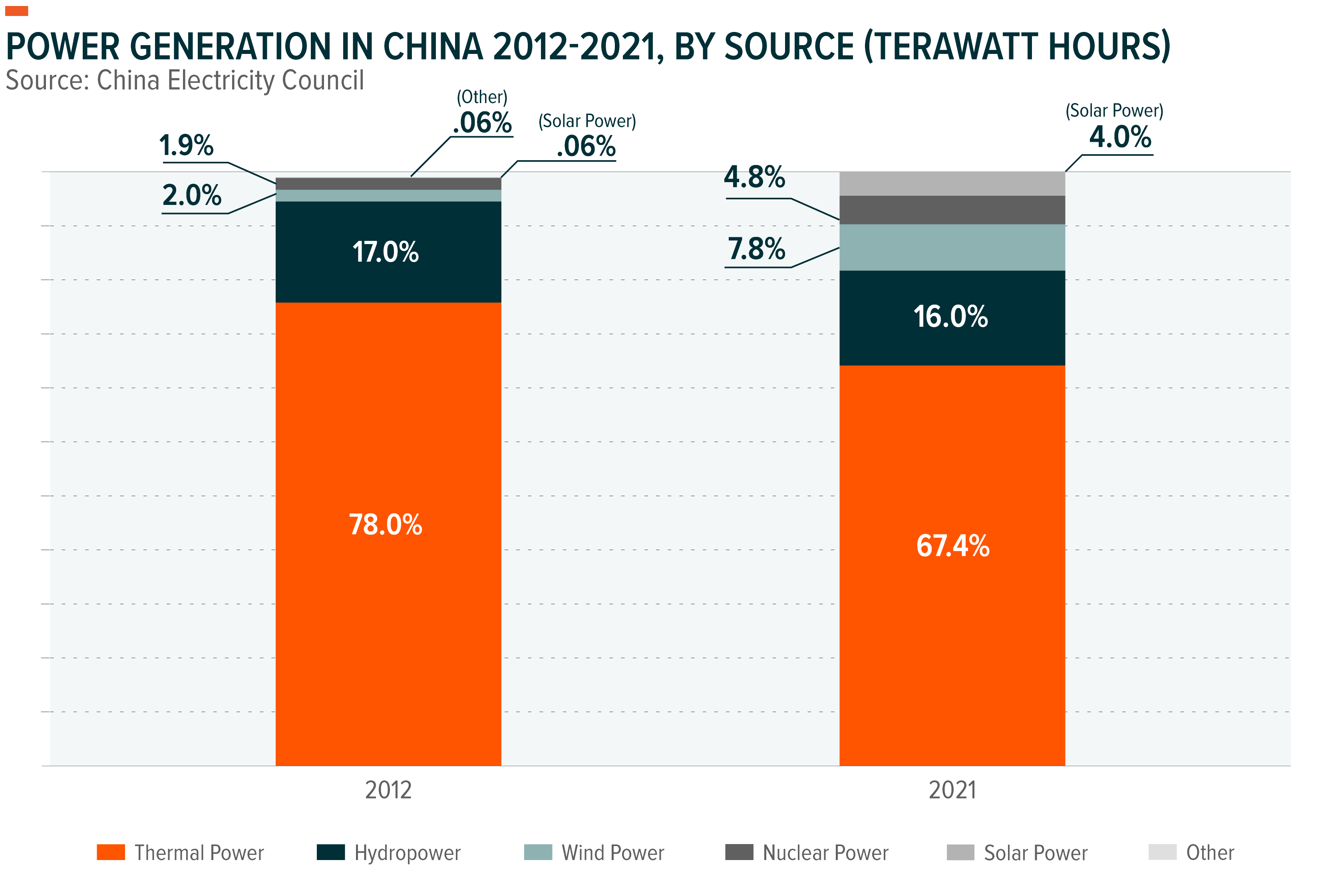 China is increasingly dependent on oil imports to meet its domestic needs; while domestic production has not risen significantly over the past 20 years, imports have more than doubled over the past 10 years.3 Its main sources of oil imports are Saudi Arabia and Russia. Beyond oil, China has vast reserves of coal that can meet a significant portion of its domestic demand, with 143,197 million metric tons of proven coal reserves in 2020, but imports are still significant.4 Not only did China become a net importer of coal in 2007, but it also overtook Japan to become the top coal importer in 2011.5 Coal supply became a thorny issue for policymakers after a political conflict disrupted coal imports from Australia in 2020 and power shortages affected Northeast China in the latter half of 2021. 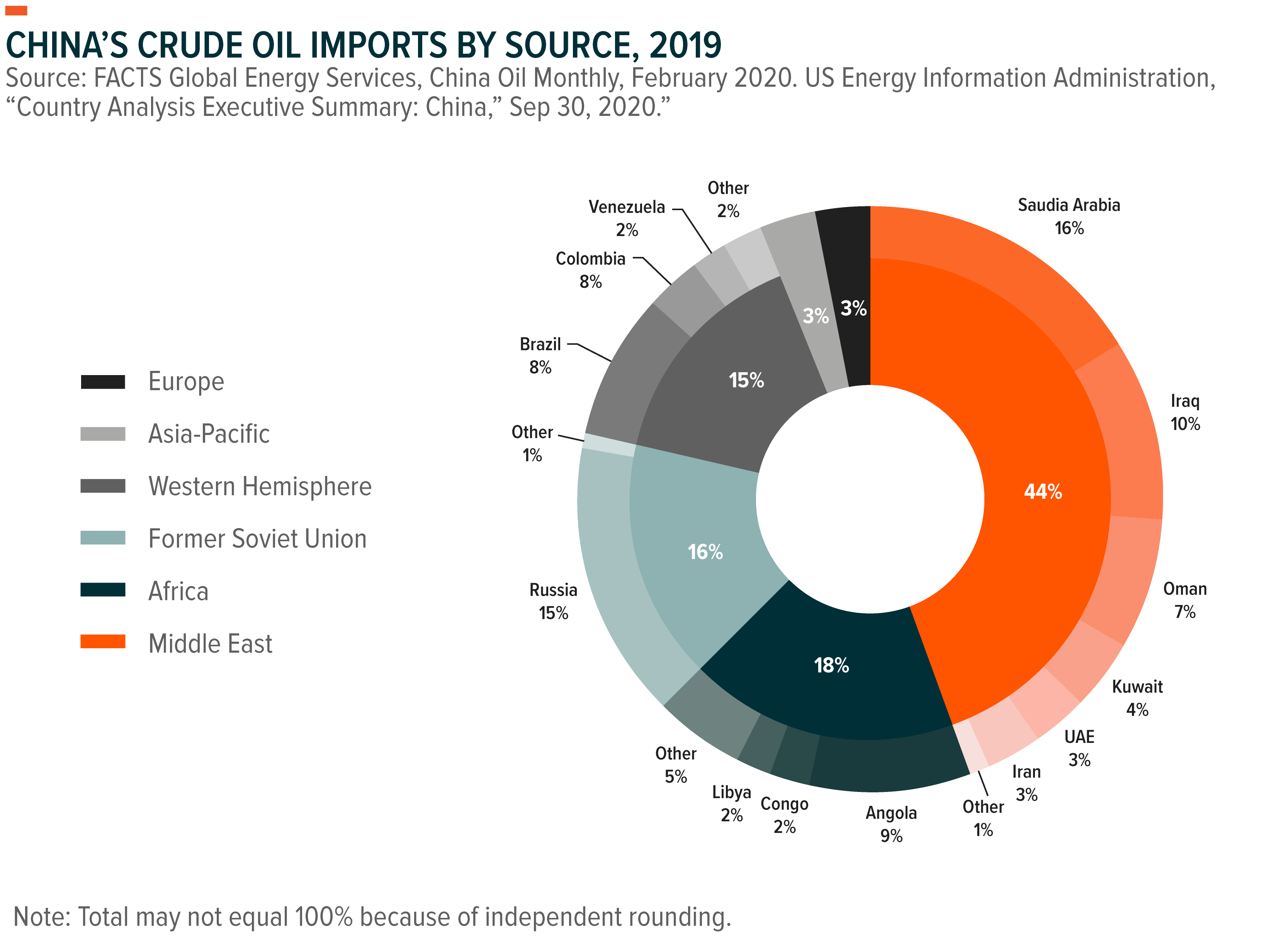 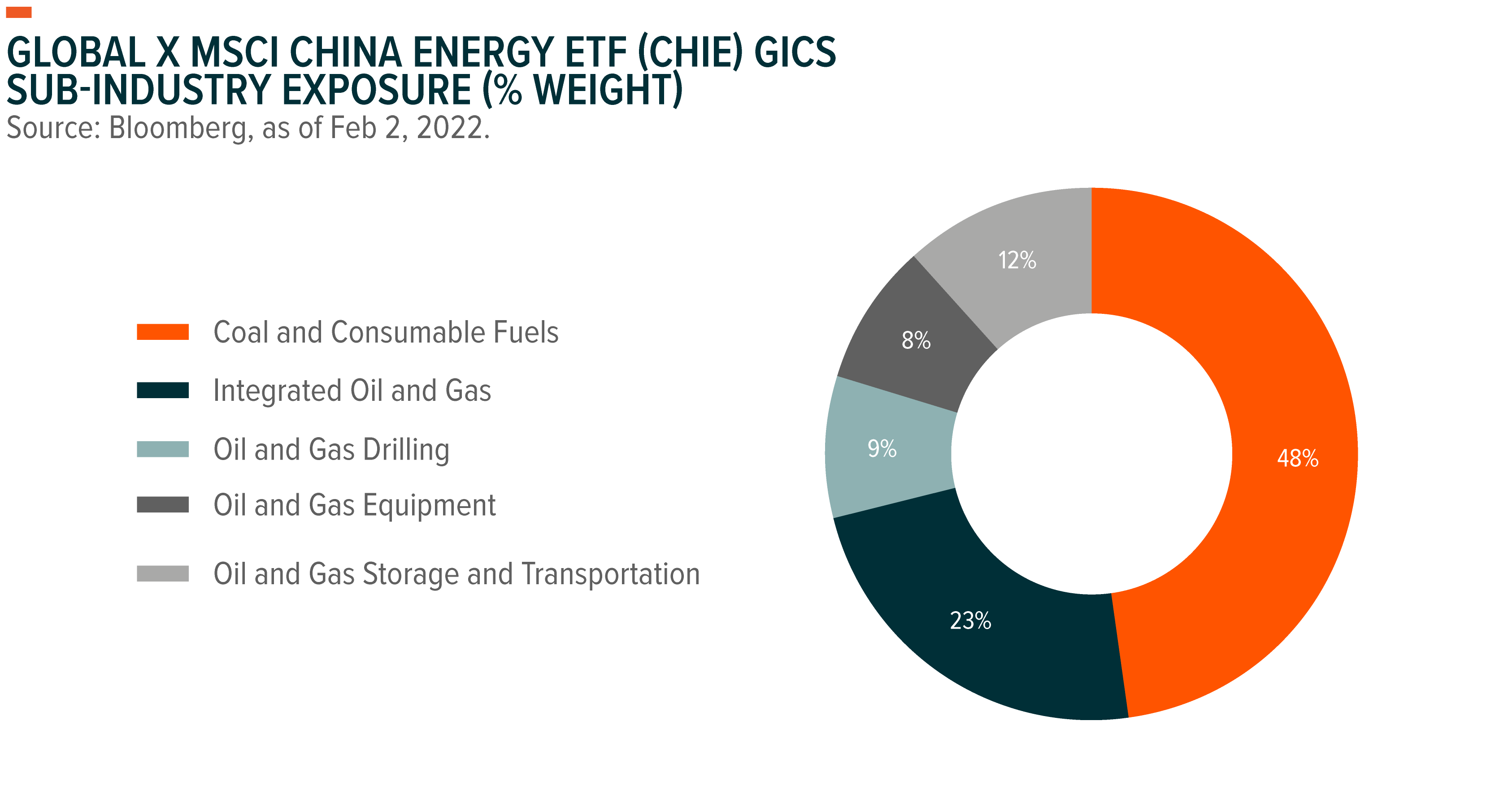 Chinese companies in Coal and Consumable Fuels tend to be large state-owned enterprises, and most have operations in the coal-rich regions of the north, particularly Shanxi and Inner Mongolia. With 2,990 coal plants operating in China as of July 2021, thermal power remains paramount to the Energy sector.6 Despite the government’s long-term plans to achieve net zero-emissions by 2060, Chinese coal and consumable fuels companies benefit from coal comprising 60% of China’s energy consumption.7 By 2030, that number could drop to 44%.8 Coal and consumable fuel companies will have to adapt accordingly.

Oil and Gas in China is dominated by the three state-owned National Oil Companies (NOCs), namely Sinopec, China National Petroleum Corporation and China National Offshore Oil Corporation. Despite their massive size and output, the NOCs cannot meet enough of China’s domestic needs to prevent it from being the largest net importer of oil. Meanwhile, although China’s domestic natural gas production more than doubled from 94.9bn to 192.5bn cubic meters between 2010 and 2020, nearly half of China’s natural gas supply is from imports.9, 10 China’s pursuit of energy independence could create some opportunities as it seeks to reduce dependence on imports. One such area is shale gas, the production of which could possibly exceed 50bn cubic meters by 2035.11 However, geographical, and technological challenges must be overcome in order for shale gas production to rise in China. 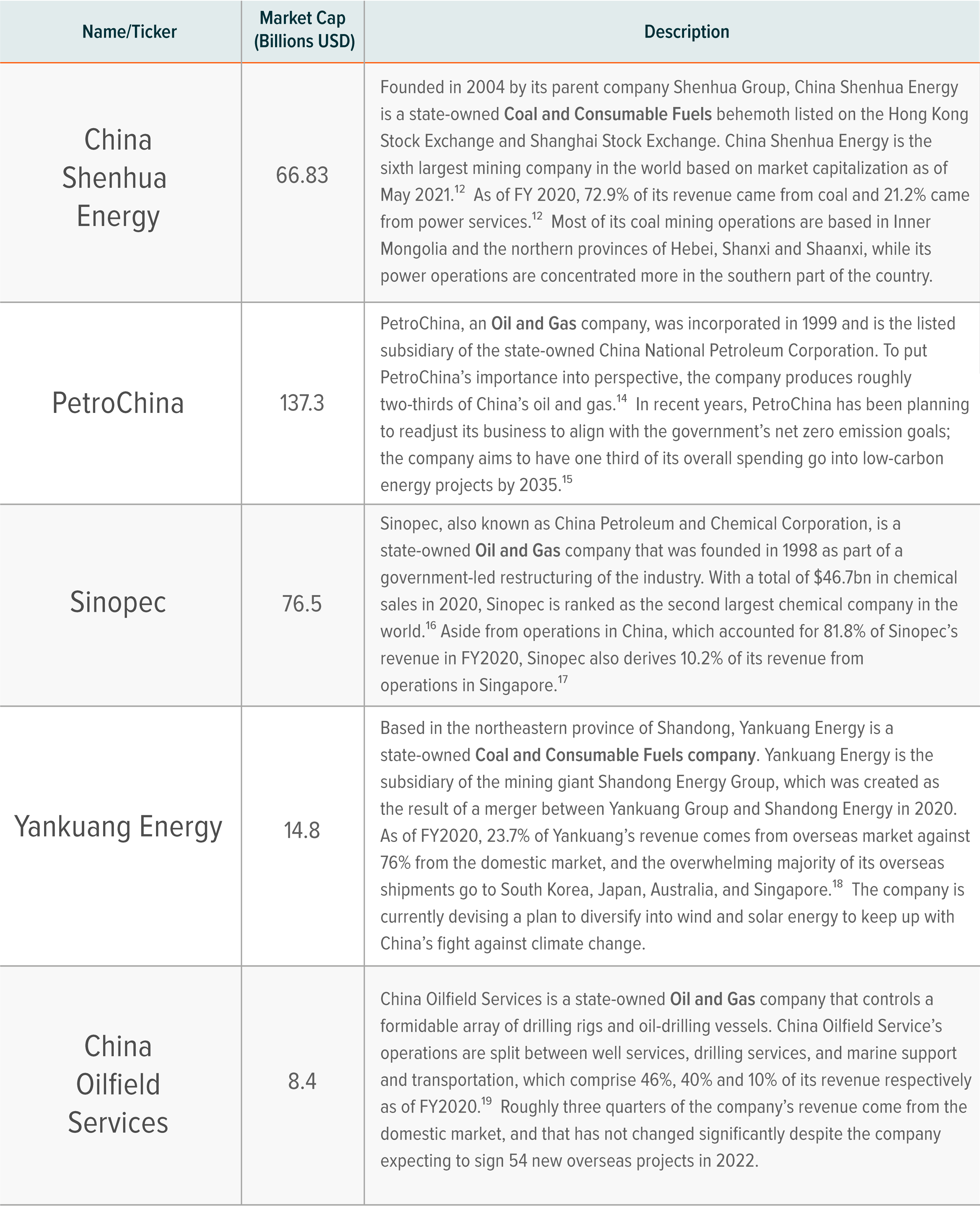 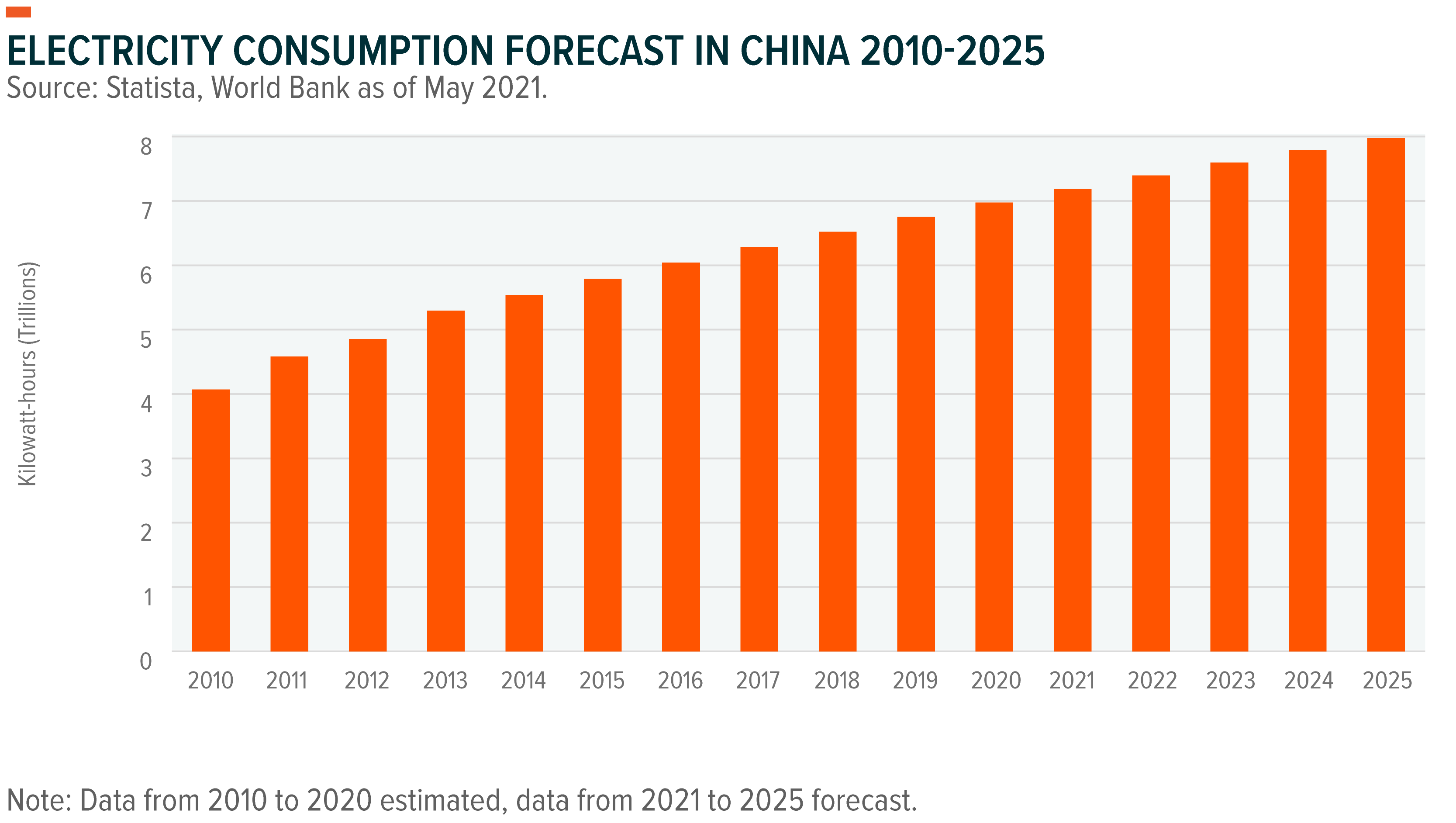 Policymakers and local governments will also have to deal with challenges in this transition phase. As an example, when the National Reform and Development Council issued warning to provinces for failing to meet Dual Control goals in August 2021, provincial governments responded by implementing energy curbs that resulted in widespread power shortages. The incident prompted the government to loosen the restrictions in the short-term and move towards a Dual Control policy focused on emissions rather than energy consumption for the long-term.

Chinese Energy is a sector in transition as it balances the simultaneous needs of energy security and clean energy. While policymakers seek to shield the domestic power supply from geopolitical risks, the NOCs and coal giants are exploring new strategies amid a global transition towards clean energy. Energy is a cyclical sector that is sensitive to changes in the broader economy, as such, China’s efforts to stabilize the economy in 2022 will be crucial to sustaining energy demand and consumption.

CHIE: The Global X MSCI China Energy ETF seeks to invest in large-, mid- and small-capitalization segments of the MSCI China IMI Index that are classified in the Energy Sector as per the Global Industry Classification System (GICS).

9. China National Bureau of Statistics, as of April 2021.