Expanding alongside China’s enormous and complex economy, the country’s capital markets and broader financial system are becoming increasingly influential on the global stage. As the country liberalizes access to foreigners, modifies lending policies, encourages the adoption of new technologies, and expands services to a growing middle class, we could witness a new era of growth for China’s Financials sector.

As the fourth installment in an ongoing series that explores the 11 major economic sectors in China, this piece provides an in-depth look at the key stats, notable companies, and thematic tailwinds that characterize China’s Financial sector, tracked by the Global X MSCI China Financials ETF (CHIX).

China’s Cautious Convergence with the West

It is unsurprising, given the history of their economies, that the US and China’s financial systems look quite different. In the 1980s, China began developing a more modern banking system under the close oversight of the People’s Bank of China (PBOC), with the establishment of four state-owned enterprises (SOEs) or the “Big Four”: Industrial & Commercial Bank of China (ICBC), Bank of China (BOC), Bank of Communications (BoCom), and Agricultural Bank of China (ABC). Later, the PBOC oversaw the establishment of an additional three policy banks to execute government spending priorities: Agricultural Development Bank of China (ADBC), China Development Bank (CDB), and Export-Import Bank of China. By the early 2000s, the government liberalized some aspects of the tightly controlled sector, such as allowing smaller banks to raise capital, foreign banks to conduct limited operations in China, lending to consumers and private businesses, and market mechanisms to move interest rates.

While the original Big Four still dominate China’s financial system, the landscape is now more dynamic with public and private institutions, as well as state owned enterprises (SOEs), playing important roles. As policy shifts to allow more market-driven growth, innovation arises – some positive, like the rise of mobile payments, and some negative, like the emergence of the shadow banking system.  Such changes present new challenges, but greater integration, expansion, and diversification of China’s financial system may help stimulate further economic growth, while deconcentrating industry risks.

Financials is the largest sector in China, with roughly $4 tn in total market cap.1 It is a younger, yet sizably larger sector than its US counterpart, by both nominal market cap, market cap as a percentage of GDP, and total bank assets.2  Within the broad MSCI China Index, however, Financials is underrepresented as only the third-largest sector by weight due to various caps and inclusion factors – implying that investors allocating via broad index funds are underweight Financials relative to its true size.3

China Financials is a more Banking-and Insurance-centric sector than in the US, and is less focused towards Capital Markets and Diversified Financial Services. Given the enormity of the big four banks, large caps overwhelmingly dominate China’s banking industry, whereas midcap firms drive growth in the budding Insurance, Capital Markets, and Diversified Financial Services industries. These two industries are critical to the sector’s development and are expected to benefit from market liberalization, cross border flows, expanded foreign ownership and investment, as well as demand from households and private businesses for diversified financial products and services. 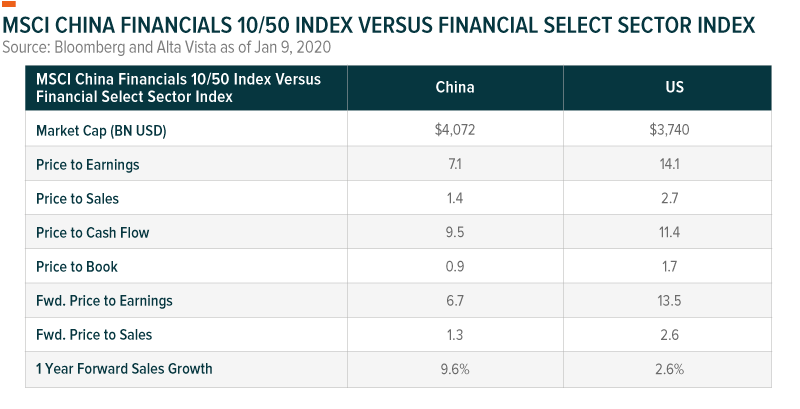 Investors unsatisfied with weak growth expectations and higher valuations in the US may find China Financials compelling. While China Financials has stronger projected sales growth versus the US, it is cheaper by price-to-earnings (P/E), price-to-sales (P/S), price-to-cash-flow (P/CF), price-to-book (P/B), and forward P/E and P/S metrics.

China Financials also offers investors share class diversification. Within indexes that are tracked by sector ETFs such as CHIX, most of the sector is made up of Hong-Kong listed H shares, but the incremental inclusion of onshore China-listed A shares into MSCI’s indexes broadens foreign investor access to the sector. China’s financial system is one of the largest in the world, and although foreign participation is still relatively limited, at less than 6% in banking, stock, and bond markets, the inclusion of A shares reflects China’s progress in market liberalization.4

Banks Dominate, but Industry Diversification is Accelerating in Other Areas

Holdings are subject to change. 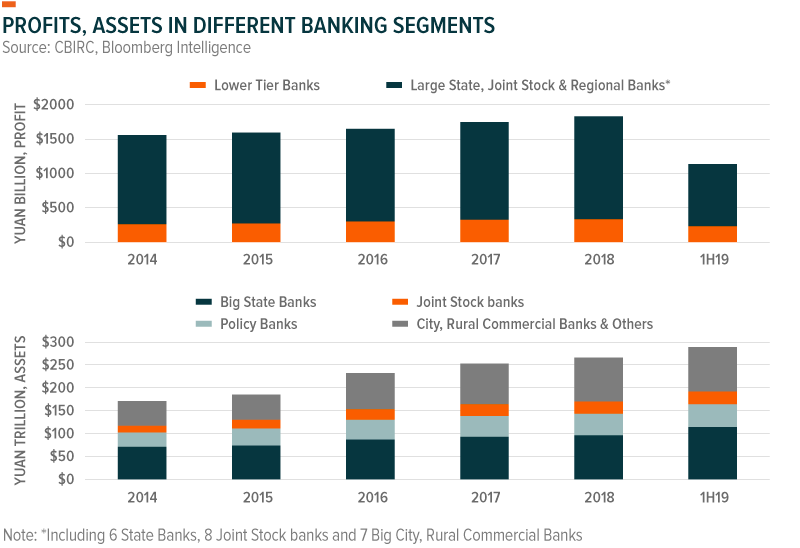 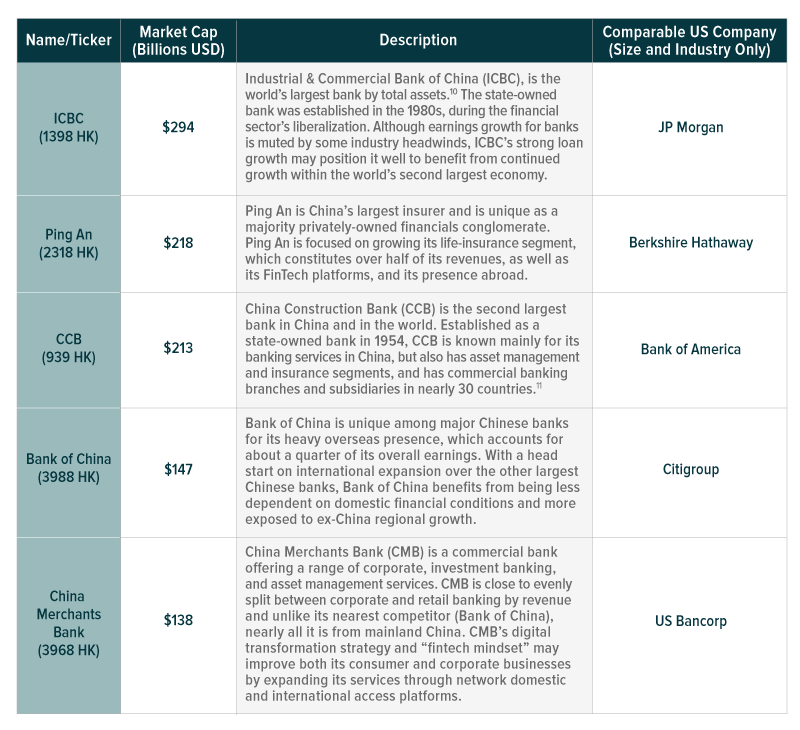 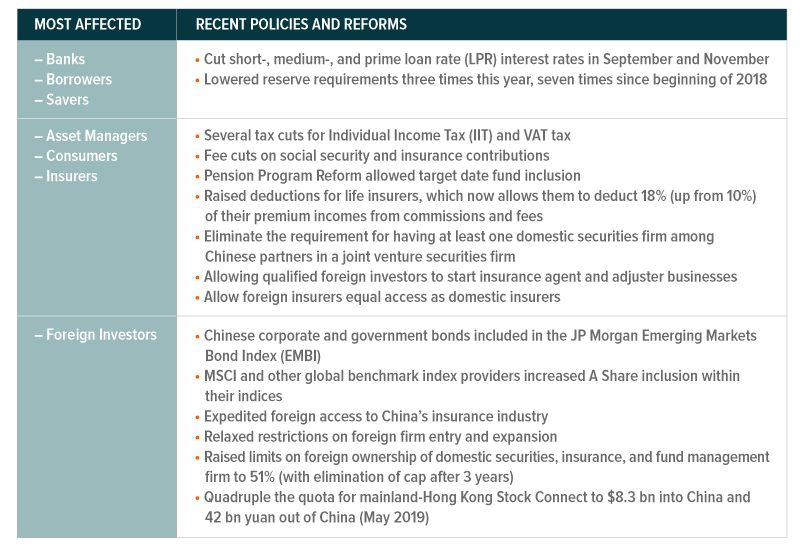 Financials Look Abroad to Fuel Further Growth: Like firms in other sectors, Financials firms in China are looking to bulwark domestic growth by achieving greater economies of scale in smaller cities and abroad. 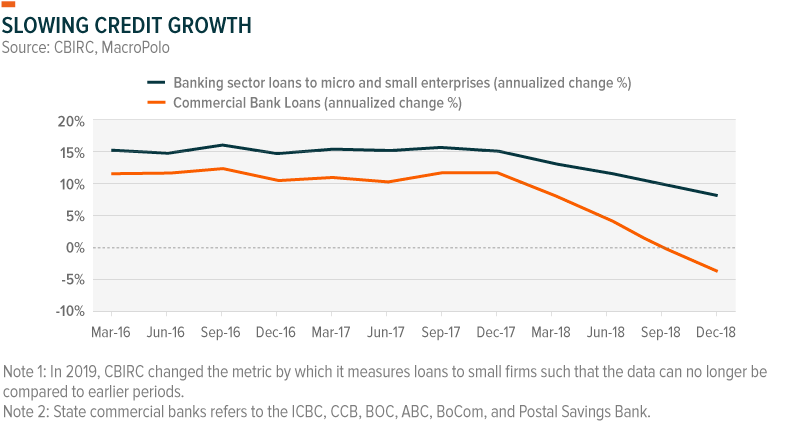 4. McKinsey, “China and the World Full report,” Jun 2019. According to the same source, foreign ownership accounted for roughly 2% of China’s banking system, 2% of the bond market, and 6% of the stock market (as of 2018).

12. Inclusion of China into the EMBI will, like its inclusion into MSCI’s indices, be scaled up over 20 months starting in April 2019. This will include government and policy bank bonds and will increase China’s weigh in the index to 6.03%, according to Bloomberg and Reuters. See: Reuters, “Explainer: Why China’s inclusion in global bond benchmark matters,” Mar 29, 2019.

16. McKinsey, “China and the World Full report,” Jun 2019. According to the same source, inbound and outbound capital flows were roughly one-third of the US’s (as of 2017).

Investing involves risk, including the possible loss of principal. International investments may involve risk of capital loss from unfavorable fluctuation in currency values, from differences in generally accepted accounting principles, or from economic or political instability in other nations. Emerging markets involve heightened risks related to the same factors as well as increased volatility and lower trading volume. Securities focusing on a single country and narrowly focused investments may be subject to higher volatility. Investments in A-Shares are subject to various regulations and limits, and the recoupment or repatriation of assets invested in A-Shares is subject to restrictions by the Chinese government. A-Shares 7be subject to frequent and widespread trading halts and may become illiquid. Performance of companies in the financials sector may be adversely impacted by many factors, including, among others, government regulations, economic conditions, credit rating downgrades, changes in interest rates, and decreased liquidity in credit markets. CHIX is non-diversified.