For years, China has focused on moving its industries up the global value chain, including the development of a robust domestic Information Technology (IT) sector. China’s supportive government policies, along with its massive domestic market of 1bn internet users and 882mn smartphone users have given domestic IT firms room to flourish.1,2 China’s rapid advances in next-generation fields like 5G, mobile payments, e-commerce and artificial intelligence have not gone unnoticed by the international community. Other countries are increasingly attentive to the meteoric rise of China’s Information Technology firms, as they seek to protect their own domestic high tech industries from China’s growing competitiveness.

Economic output from Telecommunications, Software and Information Technology in 2020 was $587.4bn, according to the Chinese Ministry of Statistics. Value added by the sector grew by an impressive 16.9% last year despite the fact that COVID-19 led to low or negative growth rates for several other sectors. Prior to the pandemic, growth was 18.7% in 2019, only 1.8% higher than 2020’s figures, showing the resilience of this sector amid a difficult global economic environment.3,4

Background on the Information Technology Sector in China

Perhaps no city better captures the quick ascent of China’s Information Technology center than Shenzhen. In 1980, Deng Xiaoping established a Special Economic Zone (SEZ) in Shenzhen, which at the time was a small city surrounded by underdeveloped villages near the Hong Kong border. As an SEZ, Shenzhen was granted unique privileges of relaxed price controls, foreign direct investment and other capitalist market policies unprecedented since the founding of the PRC in 1949. Shenzhen is now a bustling metropolis that boasts a GDP of $429 billion, or approximately 3% of China’s GDP, and is home to tech giants like Tencent, Huawei, ZTE and drone-maker DJI. About 90% of the world’s electronics come from Shenzhen.5

Shenzhen is not the only innovative city in China often compared to Silicon Valley. Shortly before the founding of the Shenzhen SEZ, a cluster of private tech enterprises began to emerge in an area of Beijing known as Zhongguancun.6 The area became known for its crowded electronics markets and the tech giants that it nurtured; Lenovo, JD.com, Kuaishou, Baidu, Bytedance, Didi, Xiaomi and Meituan all have roots in Zhongguancun. Zhongguancun and Shenzhen are both important to the Chinese tech industry and worth paying attention to.

The IT sector consists of several industries, each with their own drivers and features.

The largest industry group is electronic equipment, representing over one third of the sector. China’s extensive supply chains, fixed capital investment, and low cost of labor has made it a prime destination for the manufacturing of electronic equipment, instruments and components. China exported approximately $1.4 trillion in electronic equipment and computers in 2019.7 In response to growing demand from emerging technologies like 5G and electric vehicles, in February 2021 the Ministry of Industry and Information Technology announced a plan to achieve $322.35bn in total electronic components sales and develop 15 electronic component companies with revenue over the $1.5bn mark by 2023.8

The third largest industry group is semiconductors and semiconductor equipment, which makes up 18% of the sector. One of the major themes in the Chinese semiconductor industry is the need to establish self-sufficiency. China imports upwards of $300bn in semiconductors every year and lacks the technological expertise needed to fulfill its own domestic need for advanced semiconductors.9 Through policy initiatives like Made in China 2025, the Chinese government has been trying to close the technology gap between local companies and well-established companies in the US, South Korea, Taiwan and Japan. Most of China’s investment into the semiconductor industry on the national level is carried out through the National Integrated Circuit Industry Investment Fund, which was established in 2014 with $21.2bn in capital, around $14.2bn of which went into semiconductor manufacturing by the end of 2019. In 2019, the Chinese government poured another $31.2bn into the fund to further stimulate investment in this strategic industry.10 In the 14th five-year plan, which was released in March 2021, China included third-generation semiconductor technology in a list of technologies it wants to support with scientific research programs.11 Out of the $1.4 trillion that the government plans to spend on the IT industry until 2025, roughly $155bn is earmarked for semiconductors.12 So far these initiatives have had limited success, but Beijing hopes to turn that around. US sanctions against Huawei in 2019 and against SMIC in 2020 underscore how the Chinese semiconductor industry is vulnerable to political risk.

China’s tech and hardware industry has grown quickly with some companies already establishing notable footprints abroad. Lenovo acquired the now well-known ThinkPad laptop line from IBM in 2005 and is today a globally renowned brand. Leading smartphone-makers Xiaomi and Huawei are now formidable competitors with brands like Apple and Samsung in certain regions, including Europe. China produces 90% of the world’s PCs, 90% of mobile phones and 70% of televisions.13 China’s evolving role in the global hardware industry simply cannot be understated.

Chinese tech giants that specialize in hardware, e-commerce or telecommunication also tend to have a strong presence in the software industry. In 2020, the Chinese Ministry of Industry and Information Technology (MIIT) published a list of the top 100 software companies in China and the top positions were occupied by companies known for other lines of business, like smartphone-makers Huawei, ZTE, Xiaomi and appliance-maker Haier.14 One notable characteristic of the Chinese software industry is the lack of software-as-a-service (SaaS) giants. Concerns over data security and the reluctance of large companies and state-owned enterprises to shift away from pre-existing investments in traditional software solutions are both factors that prevented the emergence of SaaS giants.15 Whereas eight of the top twenty American software companies in 2019 had a SaaS business model, the same could not be said for any of the top twenty Chinese software companies.16 This is indicative of how there is still room for growth in the software industry as Chinese companies embrace the latest technologies.

China’s massive domestic market with nearly 1bn internet users has directly benefitted China’s communications equipment industry. Huawei and ZTE are major global leaders in 5G equipment with 28% and 9% of global market share of networking equipment, respectively.17 Both of these companies must contend with US sanctions implemented during the Trump administration, yet continue to benefit domestically from China’s extensive rollout of 5G networks. The establishment of a national 5G network should support innovation and experimentation across other emerging industries in China, such as the IoT, AI, and telemedicine.

Some of the leaders in Chinese IT services are DHC Software, GDS Holdings, TravelSky and Kingsoft. GDS Holdings has data centers around the country and provides cloud services to a wide array of firms. As the name would suggest, TravelSky provides IT solutions primarily to airlines and other tourism-related businesses. Meanwhile, DHC Software specializes in industry software development and other IT services for a diverse range of industries.18 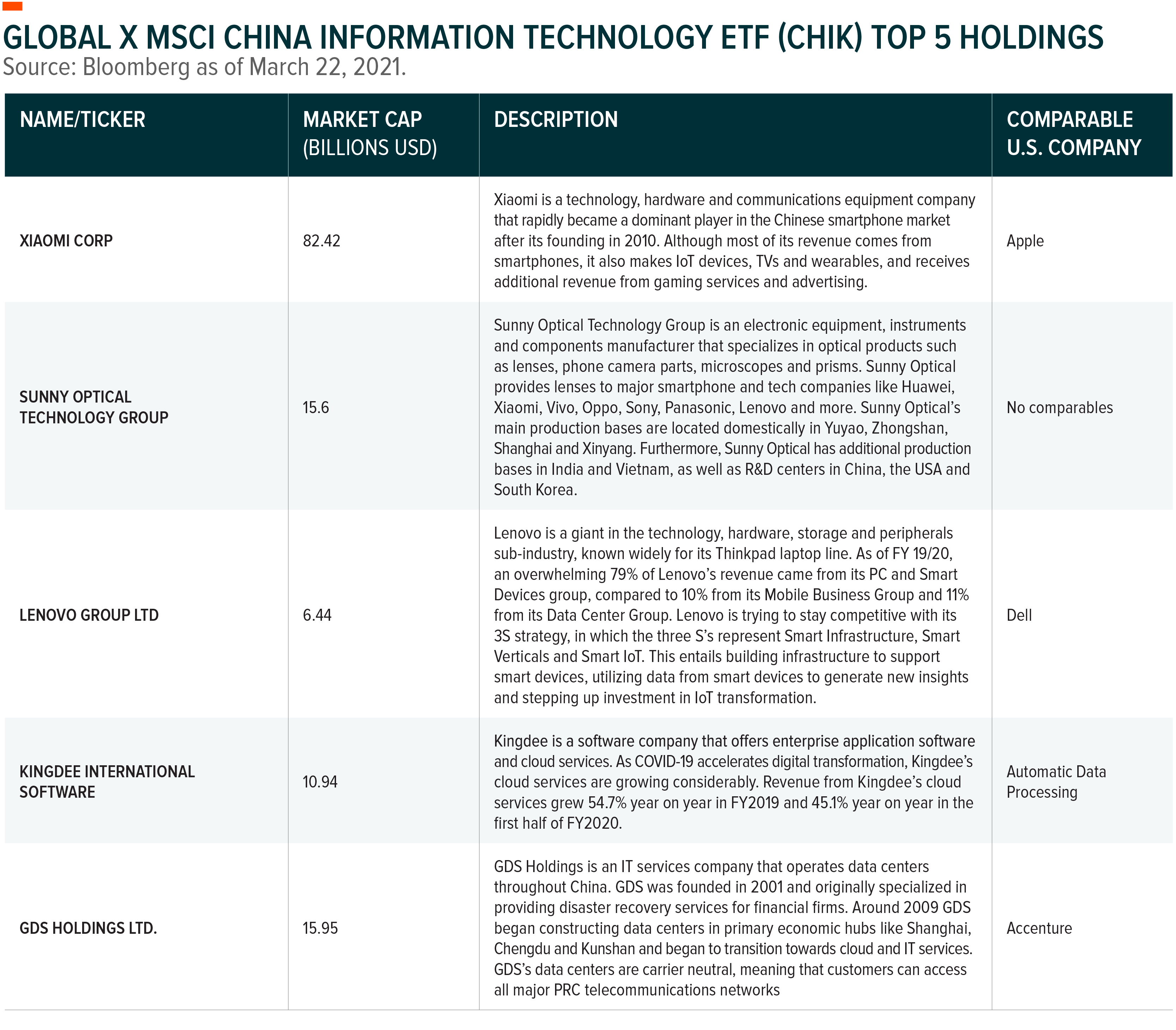 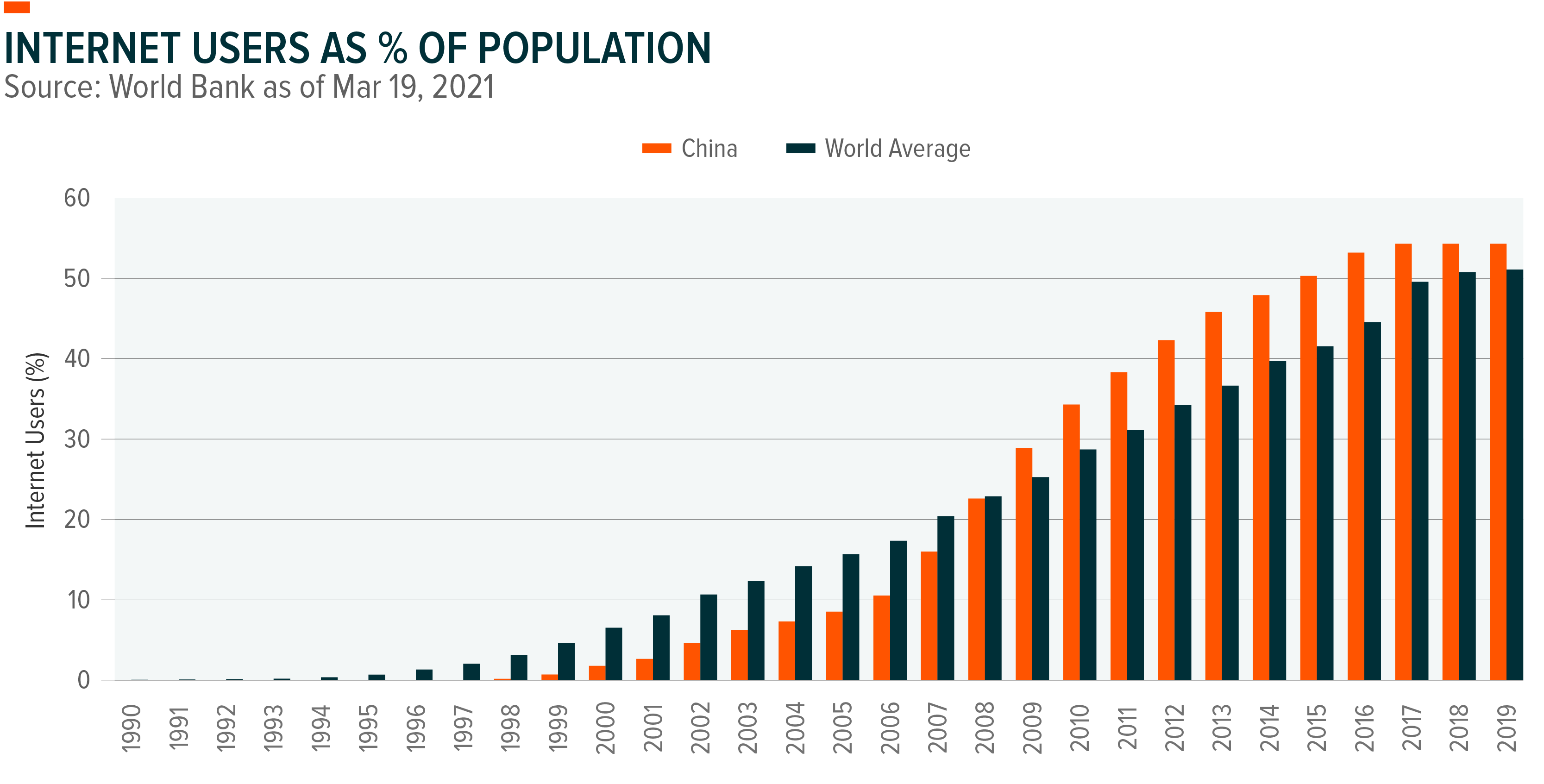 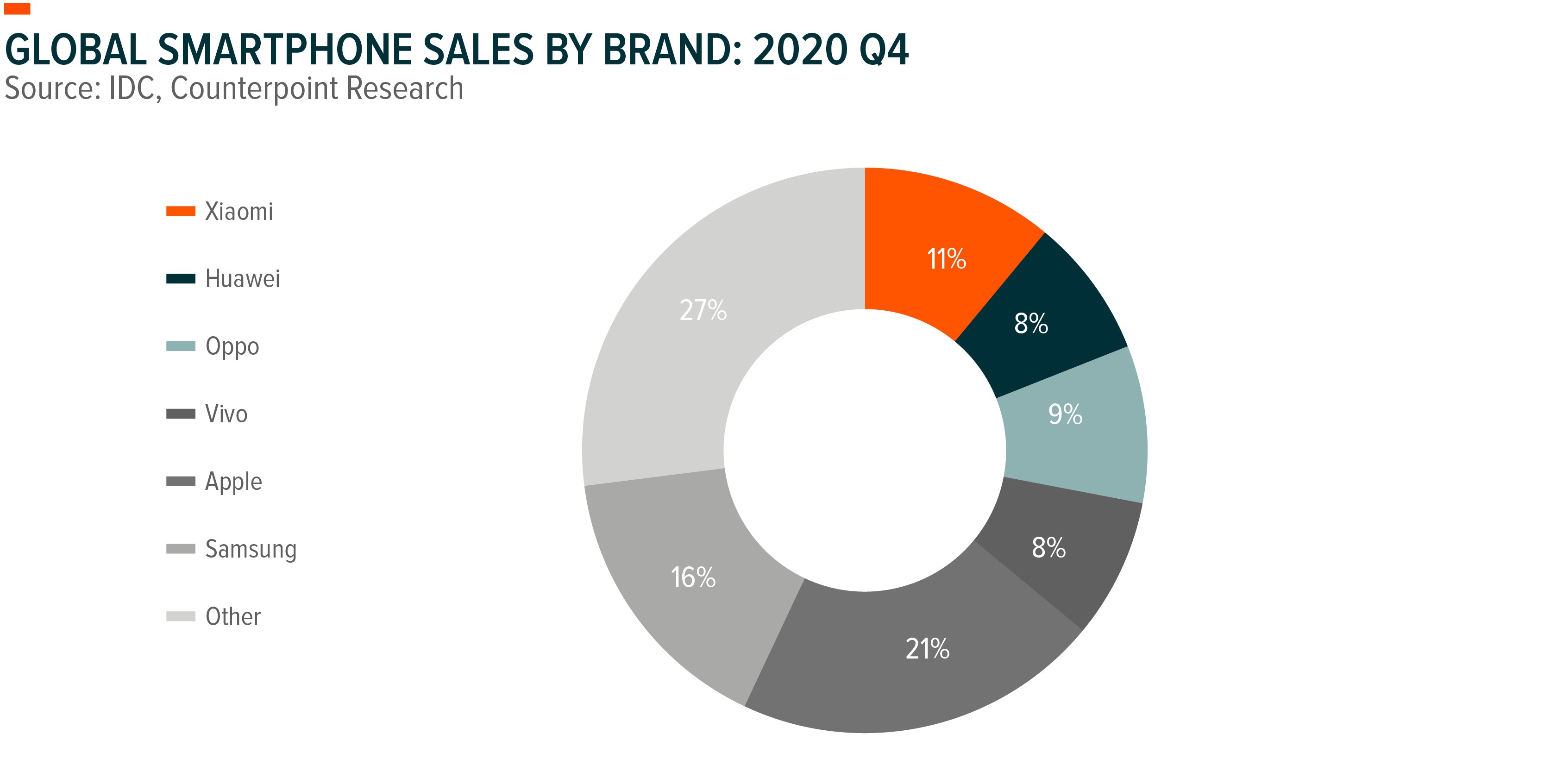 The IT industry is important for national security and the sudden rise of Chinese tech giants has been met with scrutiny in the West, sometimes in the form of sanctions or trade restrictions. In 2019, the Trump administration restricted the export of US technology to Huawei. In 2020, the US Department of Commerce sent a letter to American companies stating that certain exports to SMIC would require a special license. And in 2021, Xiaomi was banned from listing in the US for alleged ties to the Chinese military (it is currently listed in Hong Kong). These sanctions have not been fatal to the aforementioned companies, which have focused most of their growth on the domestic and regional markets, but present a significant political risk worth consideration.

The Chinese IT sector has made leaps and bounds since the formation of Zhongguancun and the establishment of the Shenzhen SEZ. It has been able to do so in no small part due to its large population and quick adoption of digital technologies. Going forward, there are long-term tailwinds that should continue to push growth in the Chinese IT sector as it aspires to be a global competitor taking on giants in Silicon Valley, Seoul and Tokyo.

11. Chinese government, “The 14th Five-Year Plan for National Economic and Social Development of the PRC and Outline of Distant Goals for 2035,” Mar 13, 2021.

12. TechSpot, “China will use aging chips while its semiconductor industry catches up,” Mar 5, 2021.

13. McKinsey, “China and the World Report: Inside the Dynamics of a Changing Relationship,” Jul 2019.

Investing involves risk, including the possible loss of principal. International investments may involve risk of capital loss from unfavorable fluctuation in currency values, from differences in generally accepted accounting principles, or from economic or political instability in other nations. Emerging markets involve heightened risks related to the same factors as well as increased volatility and lower trading volume. Securities focusing on a single country and narrowly focused investments may be subject to higher volatility. Investments in securities in the Technology sector are subject to rapid changes in technology product cycles; rapid product obsolescence; government regulation; and increased competition, both domestically and internationally, including competition from foreign competitors with lower production costs. Technology companies and companies that rely heavily on technology tend to be more volatile than the overall market, and are also heavily dependent on patent and intellectual property rights. Sub-industry leaders based on market cap. CHIK is non-diversified.