Real Estate in China is a dynamic sector that has been simultaneously viewed as a pivotal driver of economic growth and potential source of systemic risk. The sector is particularly young, as private ownership of land and housing clashed with China’s political values prior to Deng Xiaoping’s reform and opening-up in the 1980’s. Today, home ownership is viewed as a key vehicle of wealth creation and a status symbol in China, with Real Estate estimated to account for 23% of household consumption as of 2019.1 Local governments are also highly dependent on the sale of land to finance their budgets. All-in-all the Real Estate sector contributes significantly to China’s GDP. Yet high leverage and the threat of intensifying regulations keeps this sector trading at among the lowest valuations in the world. As China seeks to reign in leverage among property developers with the Three Red Lines policy and mulls implementing a property tax, understanding Real Estate is crucial to understanding discussions on the broader Chinese economy.

As the next installment in our ongoing series on the 11 major economic sectors of China, this piece will explore the Real Estate sector, tracked by the Global X MSCI China Real Estate ETF (CHIR). 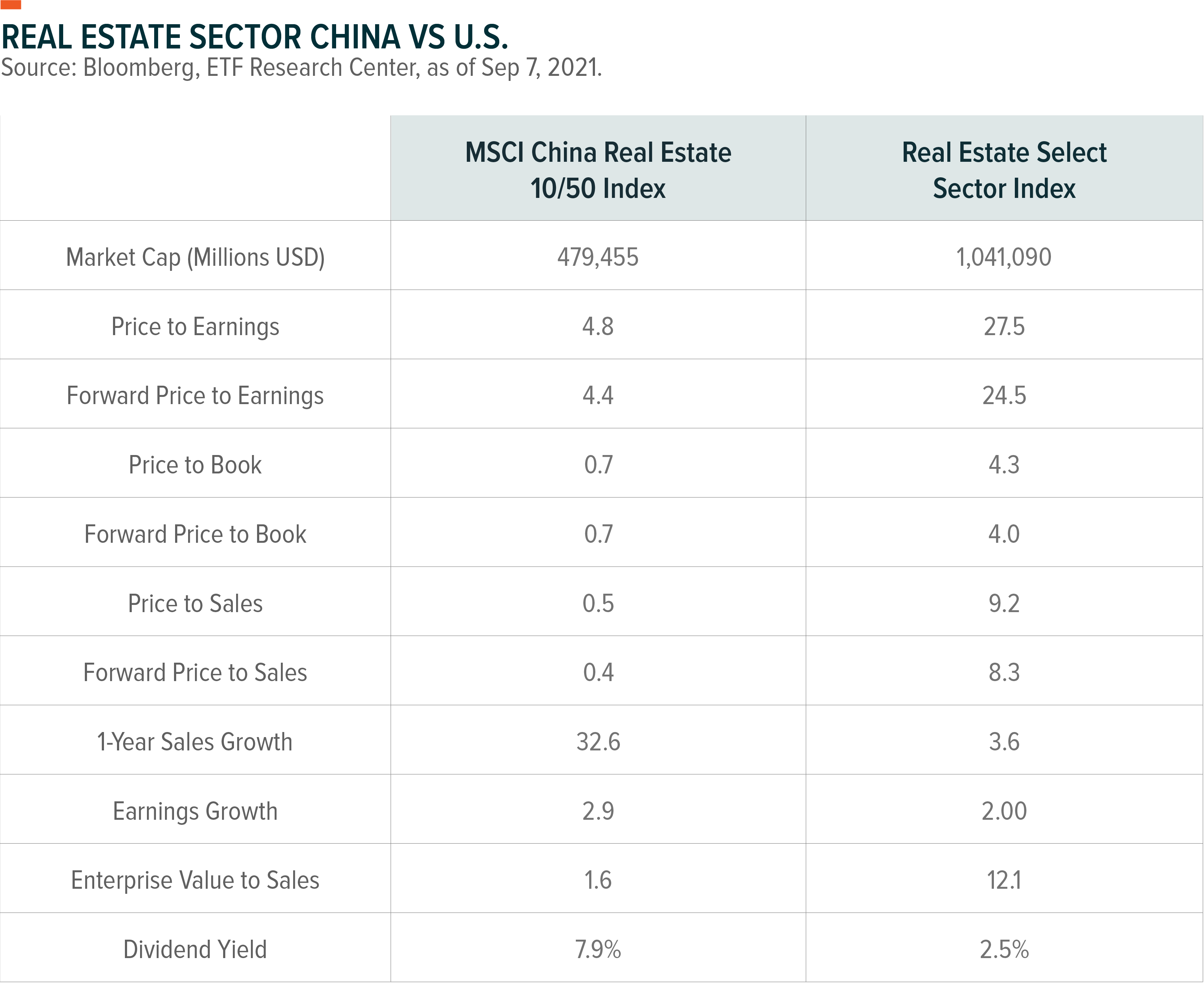 Background on Real Estate in China

Market reforms that began in 1978 gradually moved the Real Estate sector away from a centrally planned system that distributed housing through work units known as danwei.2 A constitutional amendment in 1988 created a legal framework for land transactions to occur.3 By the 1990’s, many of the dominant players today began to spring up; Longfor Group, China Resources Land, and China Country Garden were all founded in the 1990’s. The reforms of 1998 brought the welfare housing model to an end, which finally allowed the private urban housing market to take off.4 Households that purchased property during this early period benefitted greatly as the value of their property appreciated.

Despite the rapid emergence of a private Real Estate sector, all land in China is owned by the state. Legally speaking, when land is purchased or sold in China, what is really being exchanged is the right to use the land as opposed to actual ownership of the land. Land is classified as residential, industrial or commercial, with the usage rights for each lasting 70 years, 30 years and 40 years, respectively.5 Local governments depend heavily on revenue from land sales as a source of financing. A major task for regulators in recent years has been reigning in local government financing vehicles (LGFVs), which have allowed local governments to accumulate off-balance sheet debt collateralized by land.6

Real Estate has contributed greatly to China’s economic miracle. As of 2019, sales revenue from commercial real estate reached 15.9tn RMB, which comes out to roughly 10% of China’s GDP.7 However, going forward, the government is wary of relying too heavily on Real Estate for growth. Investors should keep in mind the risks and regulatory trends discussed later in this piece. 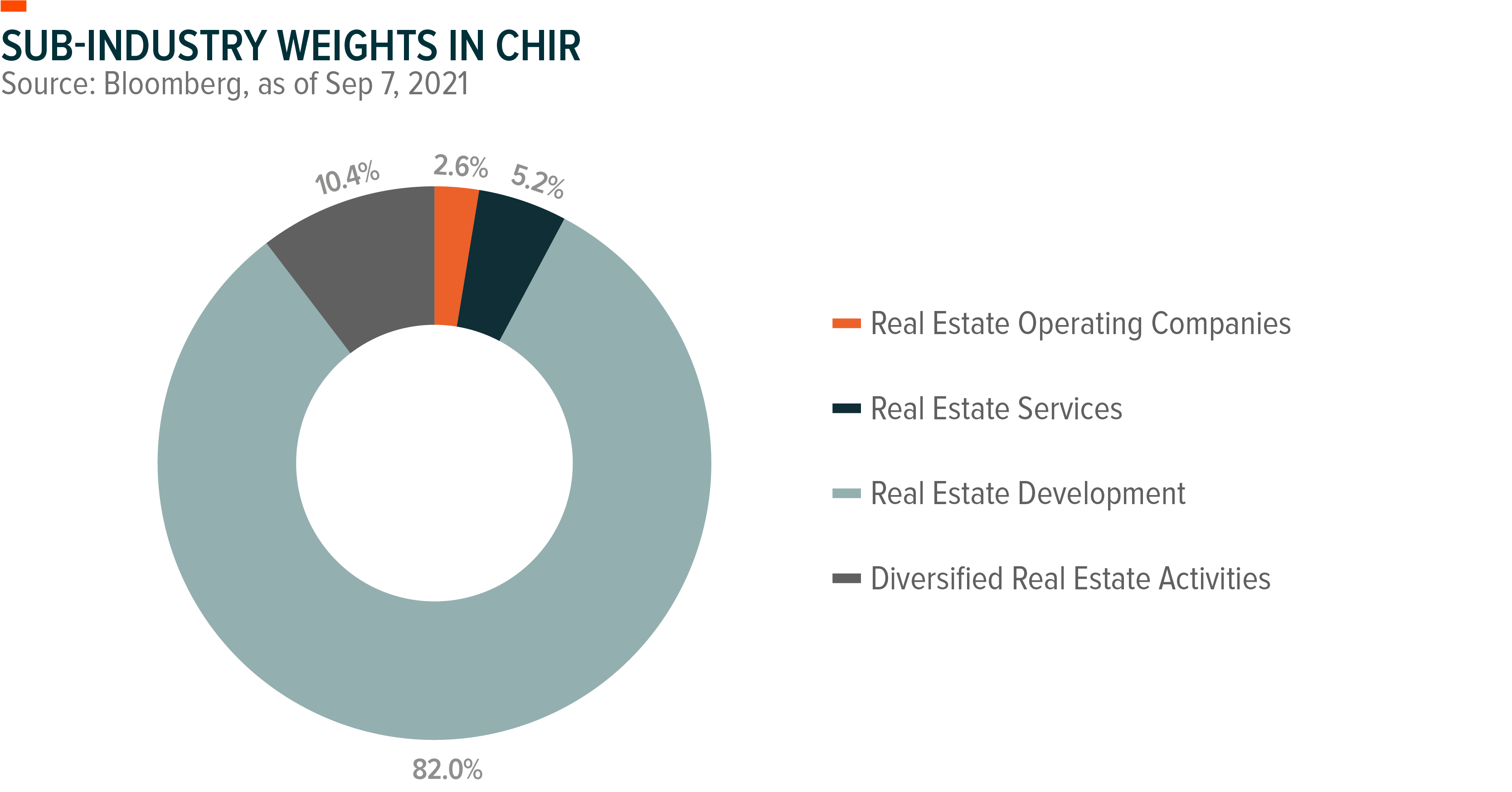 Diversified Real Estate Activities: The companies in this sub-industry offer a mix of services including development, operation and management. This sub-industry makes up about 10.4% of holdings in CHIR.

Real Estate Development: Roughly 82% of holdings in CHIR fall into the category of real estate development. Chinese property developers became massive by riding the concurrent waves of urbanization and poverty alleviation. The speed at which urbanization moved resulted in a phenomenon of ‘ghost cities,’ in which developers would pre-emptively build up entire residential communities that would remain mostly unoccupied for years. Despite garnering negative attention throughout the 2010’s, many of these ‘ghost cities’ later filled up with occupants. The land acquisition costs needed to keep up with urbanization contributed to the buildup of leverage among property developers. The reduction of that leverage will be an important trend going forward, as developers work to bring three key balance sheet metrics (liability to asset ratio, net gearing ratio and cash to short-term debt ratios) below certain levels into compliance with the Three Red Lines policy drafted in 2020.

Costs of land acquisition have contributed to leverage buildup among real estate developers. 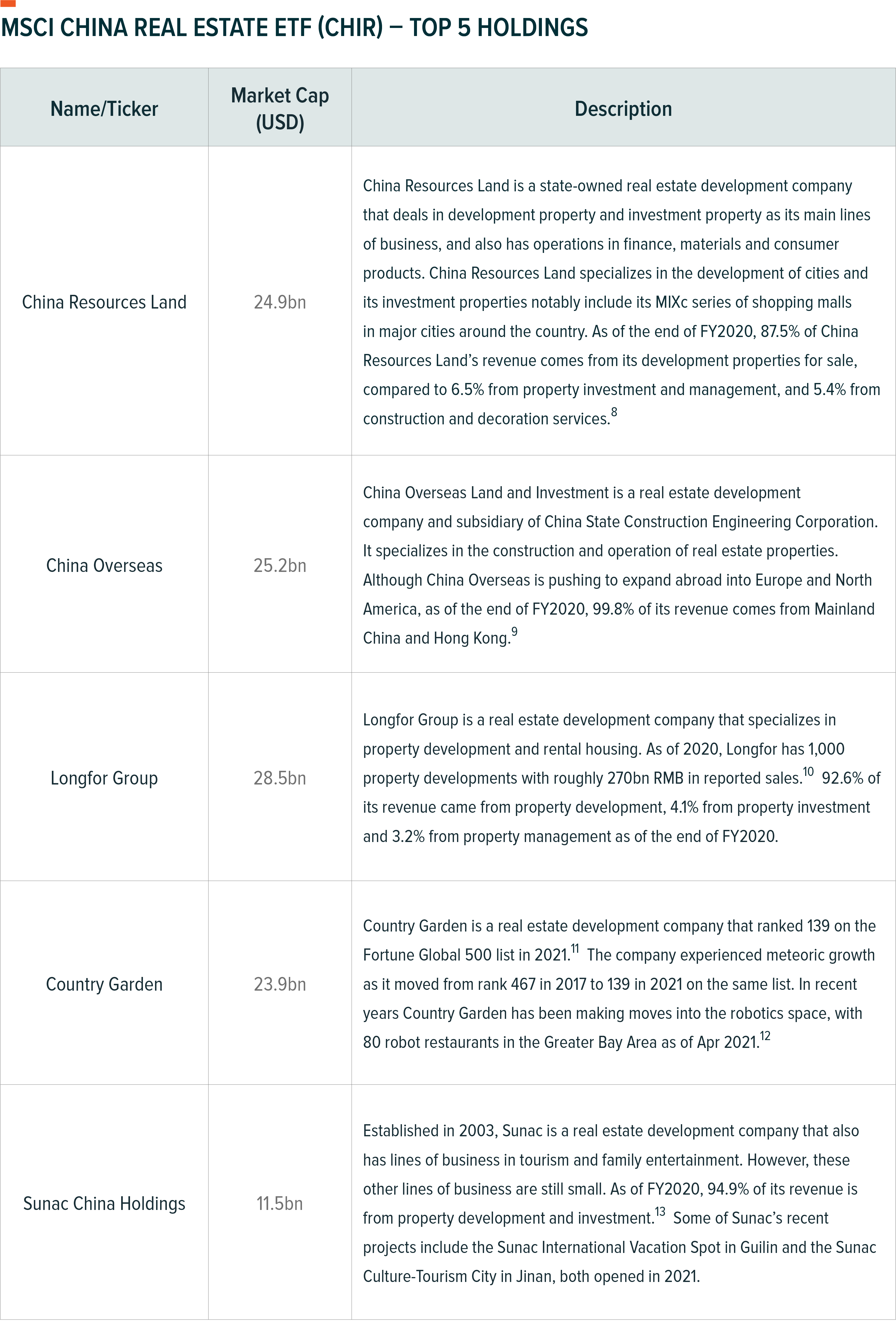 Urbanization and Economic Growth: With China’s rapid economic development, much of the rural population migrated from the countryside to burgeoning urban centers. Between 1980 and 2020, the urban population increased from 19.4% to 63.9%, which increased demand for housing in those areas.14 One of the unique aspects of the Chinese housing market has been the influence of the Hukou system. Since the 1950’s, Chinese citizens are given residential registration documents called Hukous that categorize them either as rural or urban residents. The Hukou system placed barriers in front of rural residents that wished to migrate to urban areas, but the system has been gradually liberalizing as China’s economic and social realities change. At the National People’s Congress in 2021, the government announced its plans to relax residency requirements based on city population.15 These reforms are part of government efforts to sustain urbanization.

Lack of Alternative Assets: Financial markets in China are still underdeveloped and capital controls limit overseas investments. Faced with a lack of attractive alternative assets, Chinese investors naturally flock towards Real Estate. The volatility of Chinese equity markets reinforces that tendency. As a result, valuation of housing assets in China exceeded that of stocks by roughly 8 times in 2017.16 Of course, as financial markets in China mature, it is likely that this tailwind will decrease over time.

Cultural Factors: Homeownership is an important part of establishing a family in many countries, but it is especially true in China. Whereas young people in the United States often consider purchasing a home after marriage, young men in China face pressure to have a home and car prior to marriage. Interestingly enough, this trend does not seem to be fading away as the new generation rises. To the contrary, young people seem more inclined to believe that homeownership is necessary prior to marriage. A 2021 survey revealed that only 40% of Chinese people aged 21 to 25 believe that it is acceptable to get married without a purchased home, compared to 65% of Chinese people aged 36 to 40 years.17 The broader Chinese population overwhelmingly prefers homeownership over renting, with the homeownership rate in China reaching 83% compared to 58%, 61% and 54% in the US, Japan and Canada, respectively.

Systemic Risk: As much as Real Estate has contributed to growth, regulators view the sector as a potential source of risk. Housing prices have increased at an alarming pace with prices in Tier 1 cities growing six-fold between 2002 and 2020.18 Meanwhile, price-to-income ratios in the cities of Shenzhen, Beijing, Shanghai and Guangzhou are all at least three times higher than that of New York.19 As the Real Estate sector developed, it became increasingly common for households to speculatively buy multiple homes, which eventually culminated in Chairman Xi Jinping declaring that “houses are for living, not speculation” at the 19th Party Congress.

Efforts to clamp down on rising housing prices have been complicated by unhealthy behaviors of households. In some instances local governments attempted passing restrictions on the number of properties a household can purchase, only to find couples engaging in sham divorces as a workaround.20 There is also a tendency for homeowners to protest fiercely against falling prices, which adds pressure to property developers and distorts market forces. Underpinning these behaviors is the assumption that there is an implicit guarantee by the government to not let housing prices fall.

Regulatory Tightening: Regulators are clear-eyed about the damage that can be done to the economy and are taking action. The Three Red Lines policy was devised in 2020 to deleverage the balance sheets of property developers.21 Real Estate companies have until mid-2023 to come into compliance with these requirements, so the effects of the policy will gradually set in over the course of the next two years. Policymakers are also mulling the introduction of a property tax, but this will depend heavily on whether it can be implemented in a way that does not prompt an overreaction.

China’s Real Estate sector is the unique product of a country experiencing unprecedented growth and rapidly changing societal needs. A major theme of Chinese Real Estate is the tug of war between regulators who wish to contain systemic risk and local governments or companies that have an incentive to see higher growth numbers. Suffice it to say, if these regulations are successful in curbing systemic risk, then any short-term headwinds should be made up for by long-term stability. If Chinese Real Estate successfully averts a major disaster, CHIR’s shockingly cheap valuations could work to the advantage of investors. In this scenario, CHIR’s dividend yield of 5.81% and earnings yield of 23% (as of Sep 6, 2021) would be particularly rewarding.

Click the fund name below for SEC 30-day yield and standard performance. The performance data quoted represents past performance and does not guarantee future results. The investment return and principal value of an investment will fluctuate so that an investor’s shares, when sold or redeemed, may be worth more or less than their original cost and current performance may be lower or higher than the performance quoted.

CHIR: The Global X MSCI China Real Estate ETF seeks to invest in large- and mid-capitalization segments of the MSCI China Index that are classified in the Real Estate Sector as per the Global Industry Classification System (GICS).

The MSCI China Real Estate 10/50 Index is designed to capture the large- and mid-capitalization segments of securities included in the MSCI China Index that are classified in the Real Estate Sector as per the Global Industry Classification Standard (GICS).

20. South China Morning Post, “Sham marriages and divorces are common in China to beat limits on home vehicle ownership – no wonder Shanghai has cracked down,” Jan 23, 2021.

Investing involves risk, including the possible loss of principal. International investments may involve risk of capital loss from unfavorable fluctuation in currency values, from differences in generally accepted accounting principles, or from economic or political instability in other nations. Emerging markets involve heightened risks related to the same factors as well as increased volatility and lower trading volume. Securities focusing on a single country and narrowly focused investments may be subject to higher volatility. Real estate is highly sensitive to economic conditions and developments, and characterized by intense competition and periodic overbuilding. CHIR is non-diversified.

This material must be preceded or accompanied by the fund’s prospectus. Read it carefully before investing.