Despite setting an ambitious goal of around 5.5% growth in 2022 at the National People’s Congress session in March, China faced economic challenges in Q1 2022. A surge of Omicron cases resulted in lockdown measures first in Shenzhen and later in Shanghai, two cities that collectively accounted for roughly 6.5% of China’s total GDP in 2021.1,2 At the same time, restrictions in the Jilin province exacerbated rising food prices and added to fears of inflations. Furthermore, concern that geopolitical tensions over Russia’s invasion of Ukraine would negatively impact China made investors skittish towards Chinese equities.

However, Q1 2022 was also the first quarter after China announced its prioritization of economic stability at the Central Economic Work Conference in December 2021. While most of the world is pursuing monetary tightening, China is moving towards easing in response to these headwinds. The effects of this shift in policy became very palpable in Chinese equities in March when Vice Premier Liu He gave a speech at the State Council Financial Stability and Development Committee that suddenly pushed Chinese equities and ADRs upwards.3 Among other things, the speech expressed Chinese regulators’ intent to find common ground on the issue of auditing information disclosure for Chinese ADRs, make regulatory moves more transparent and predictable, and revive the economy with active monetary measures.

Chinese ADRs plummeted in March when the SEC named five companies at risk of delisting in 2024, but rallied only a few days later after Vice Premier Liu He’s speech expressed support for Chinese companies listing abroad and touched upon a potential resolution to the delisting issue.4 The United States’ Holding Foreign Companies Accountable Act (HFCAA), which was signed into law in December 2020, created uncertainty over Chinese ADRs.5 The act requires both mainland China and Hong Kong companies listed in the United States to open their auditing books for inspection by U.S. authorities, but that is forbidden by Chinese law. Shortly after Liu He’s speech, China released draft rules that could effectively resolve the issue by allowing inspection of auditing books by foreigners.6 Despite some signs of progress, an effective resolution is not a foregone conclusion yet. We believe Chinese ADRs could exhibit sudden moves upward or downward as more developments emerge.

Among the 11 sectors, only Chinese Energy delivered positive returns in Q1, posting gains of 20.65% over the three-month period. As oil prices stay elevated and energy security becomes increasingly important, Chinese Energy stocks were in good position to benefit. 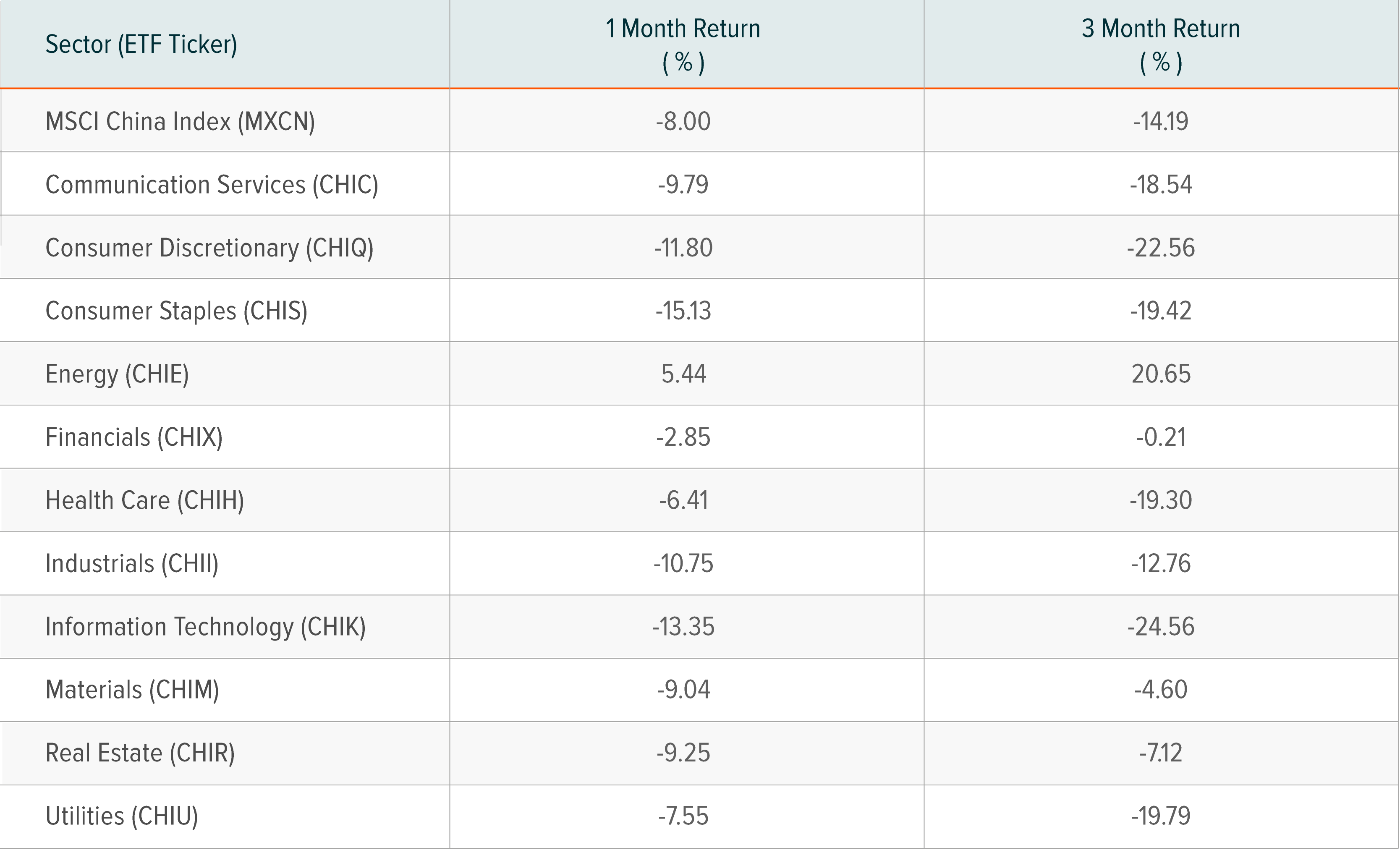 Performance shown is past performance, based on the NAVs of the underlying sector ETFs and does not guarantee future results. To view standard and most recent month-end performance of each of the fund, please click on the links available under “Related ETFS.” 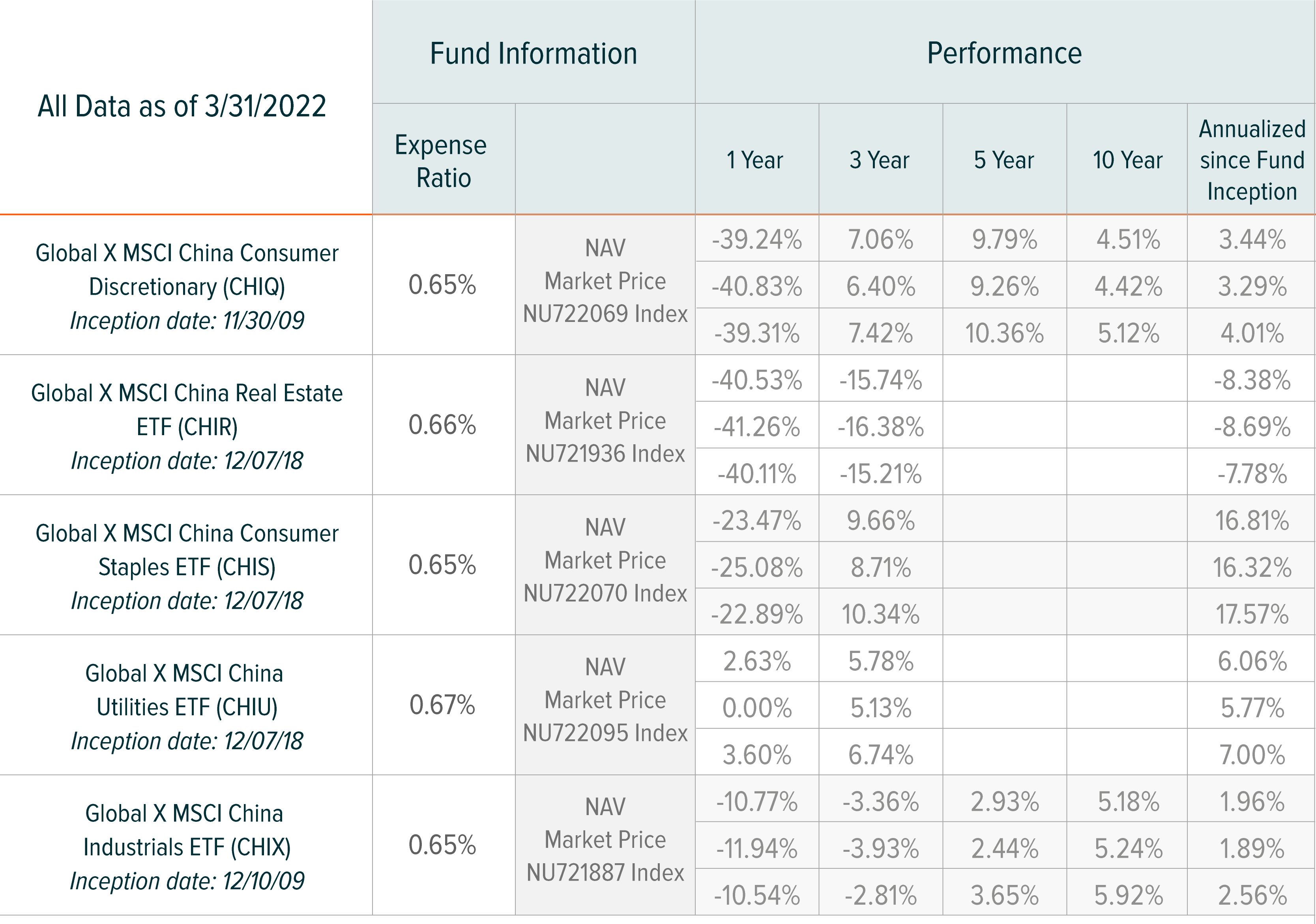 Sector dispersion is the difference between the best and worst performing sectors in each country. In Q1, China and the US had similar levels of sector dispersion at around 50%. Whereas average sector returns in the US were close to neutral, in China they were clearly negative at -11.51%.

How China Sector Performance Measured Up Against U.S. Counterparts

In the chart below, we show performance of indexes that track China’s 11 GICS sectors, as well as their U.S. sector index counterparts. 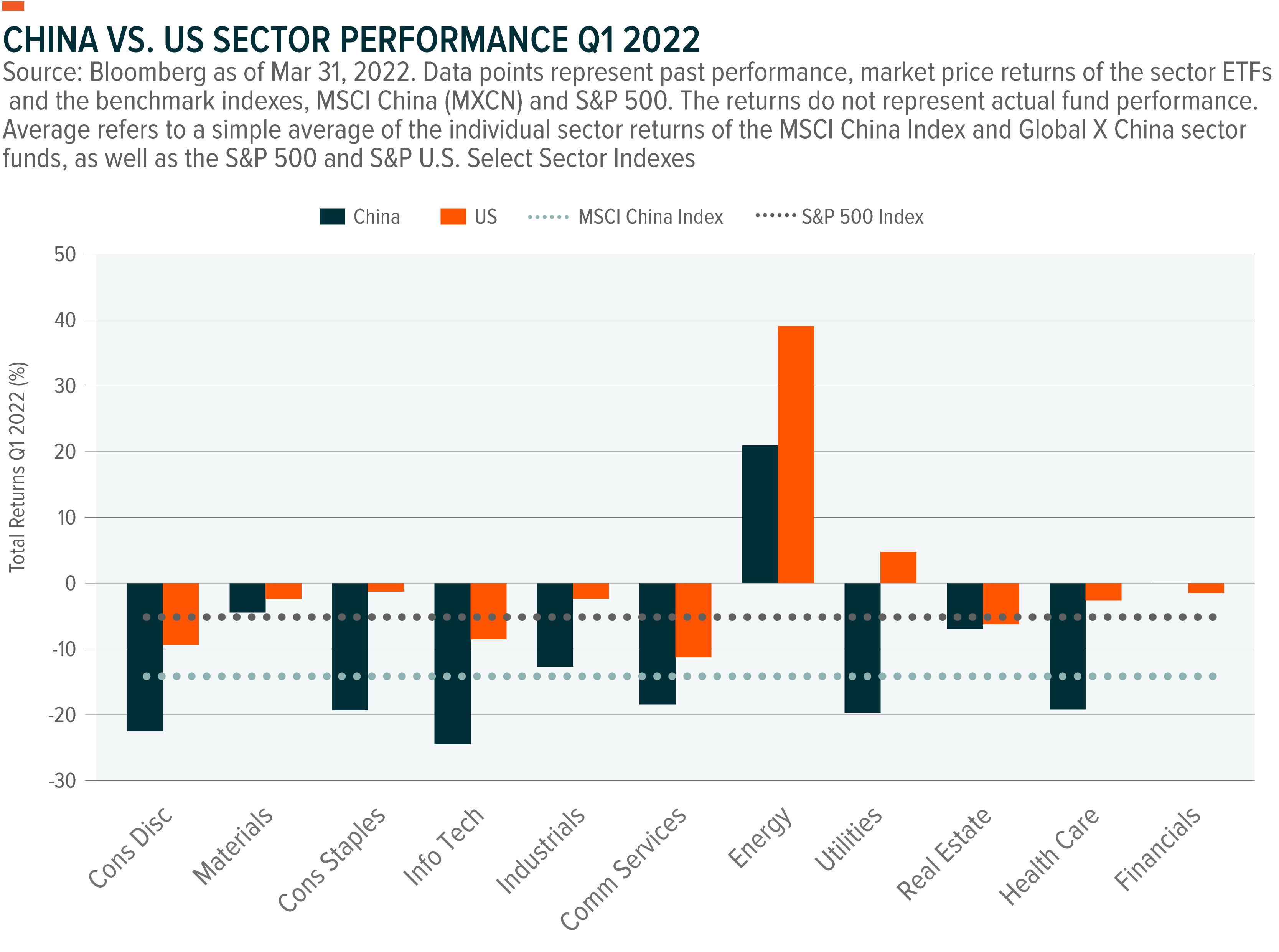 The MSCI China Index (MXCN) captures large and mid-cap representation across China A shares, H shares, B shares, Red chips, P chips and foreign listings such as ADRs. The S&P 500 (SPX) is an index of 500 leading publicly traded companies in the United States weighted by market capitalization.7,8

Please click the fund names above for current fund holdings and important performance information. Holdings are subject to change.