China’s Single’s Day is one of the most important business events in the world, often dwarfing the U.S.’s Black Friday. What started as a small event between a handful of college students at Nanjing University in the 1990’s later evolved into a shopping holiday of epic proportions by the late 2000’s. Every year online platforms like Taobao, Tmall, JD, Pinduoduo and more compete to win over the consumers from China’s burgeoning middle class. In 2020, Alibaba and JD.com achieved a total of $115bn in gross merchandise value (GMV) sold.1

This piece examines the trends that are currently shaping Singles’ Day in 2021.

China gears up for the largest E-commerce event in world

Singles’ Day can be traced back to 1993, beginning as a campus tradition at Nanjing University for single students feeling left out of Valentine’s Day. The campus tradition spread around the country and became a non-official holiday. In 2009, in the meeting rooms of Alibaba’s Hangzhou headquarters, Alibaba strategists identified Singles’ Day as an ideal time for a mass discount sales event. The first Singles’ Day shopping frenzy campaign by Alibaba was a success and it became an annual tradition.

As the company that launched the inaugural Singles’ Day shopping frenzy, Alibaba has benefitted greatly. Its annual domestic E-commerce revenue grew nearly 62-fold from $1.2bn in 2009 to $52bn in 2020.4 However, Alibaba faces formidable competitors that are trying to pull the holiday in new directions with their own marketing campaigns. 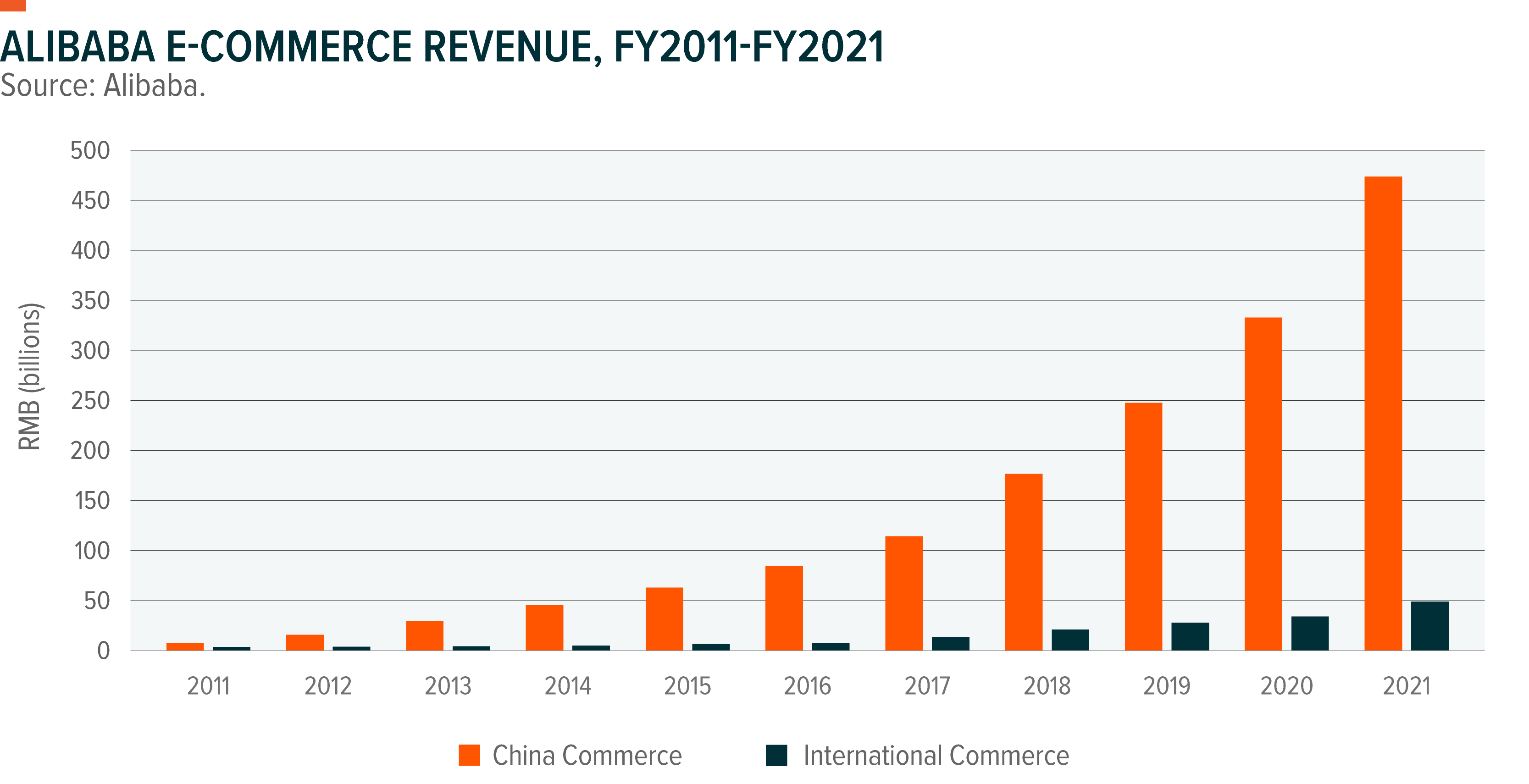 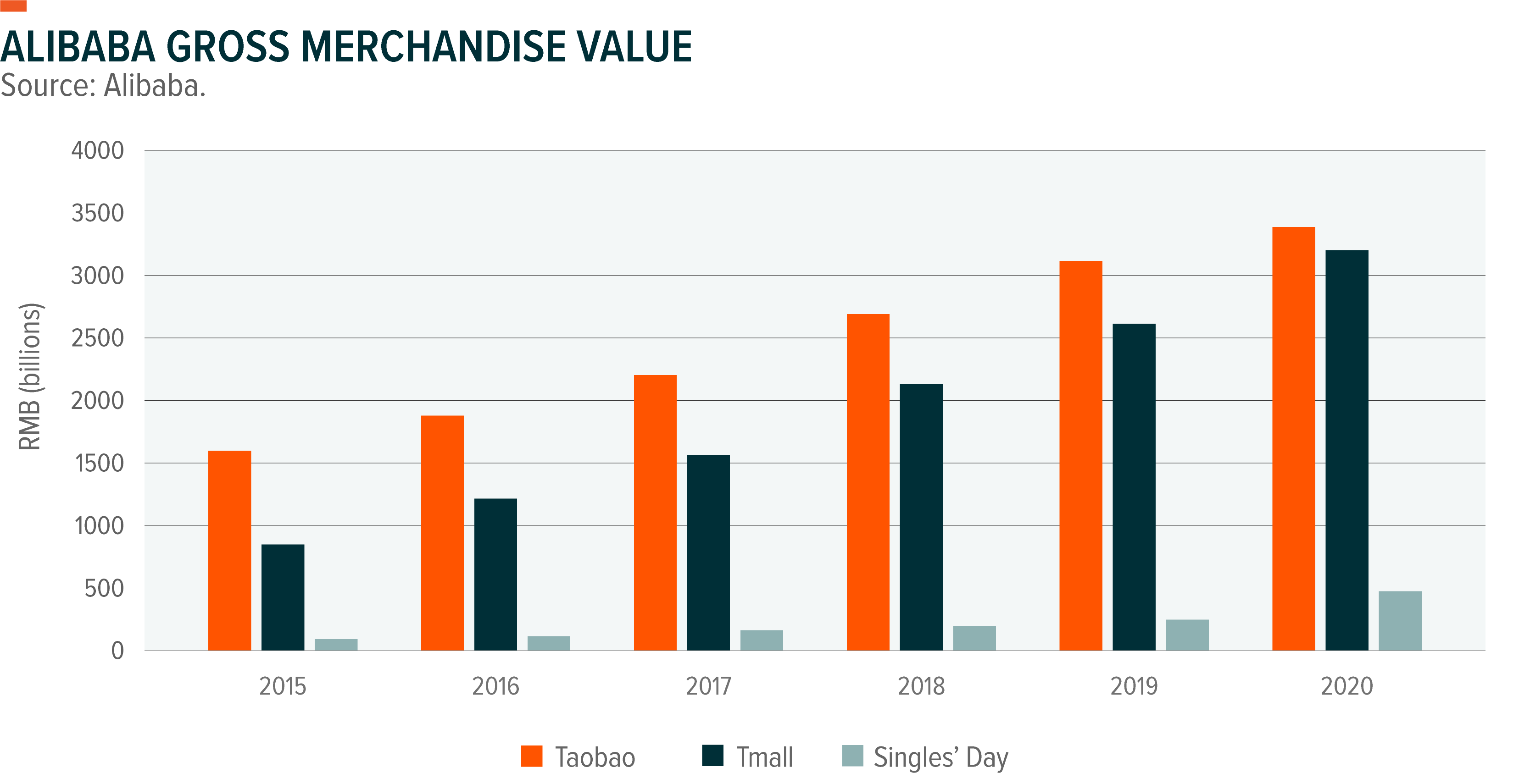 In this chart, Singles’ Day GMV covers a 10-day period between Nov 1 and Nov 11 and adds together GMV from both Taobao and Tmall. A disproportionately high amount of GMV is generated over this brief time period.

The main platforms to look at for this year’s shopping frenzy include Taobao (Alibaba), Tmall (Alibaba), JD.com (Jingdong), and Pinduoduo. Other platforms that cannot be ignored are Douyin, Kuaishou and Xiaohongshu, which are video sharing and live-streaming platforms that have made inroads into live commerce as of late. 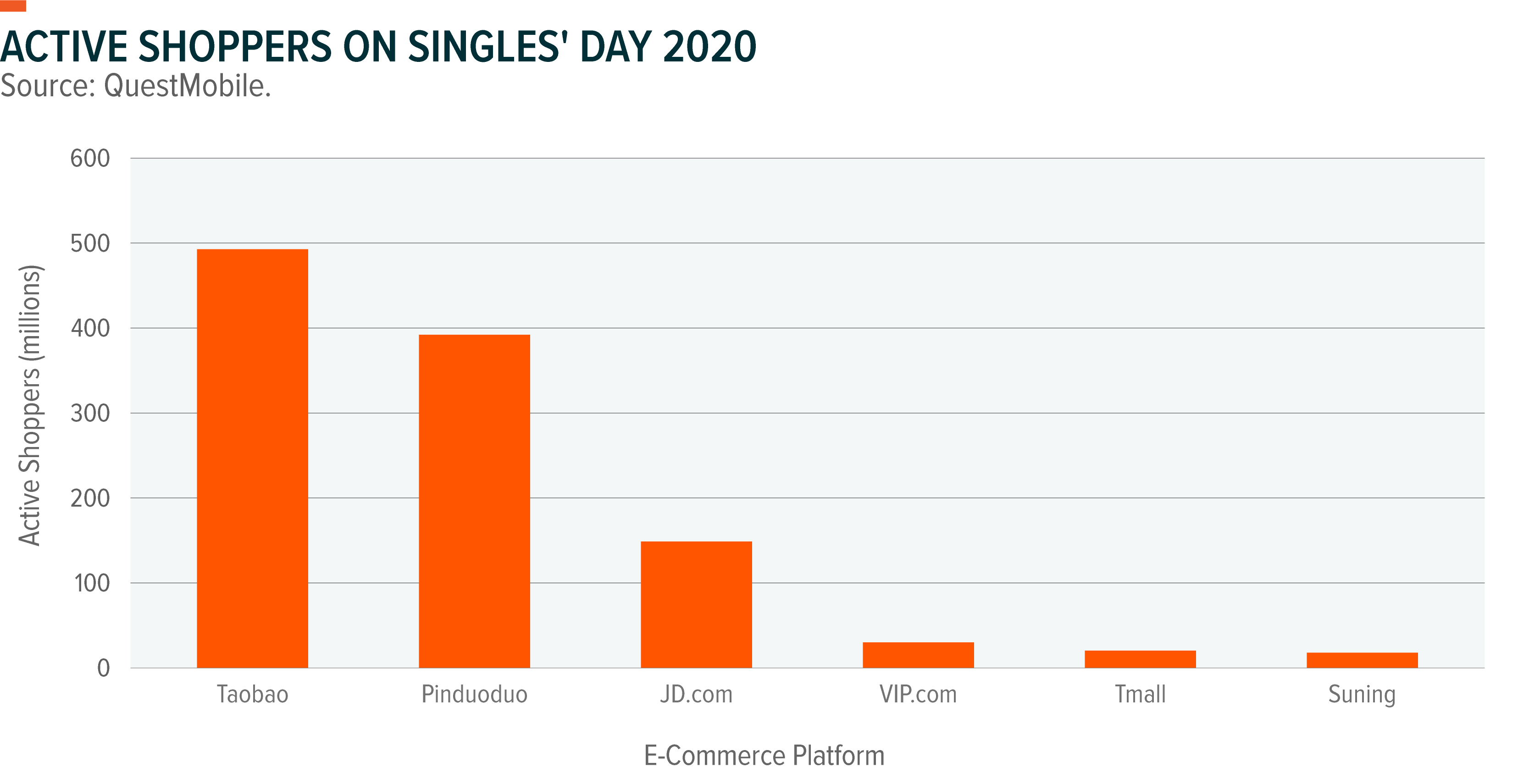 Between 2009 and 2018, the adoption of smartphones, rising 4G penetration and the integration of fintech tools like Alipay and Wechat Pay into daily life drastically changed the playing field for e-commerce in China. Since 2019, several new trends, including live commerce and anti-monopoly regulations are reshaping Singles’ Day even further.

Around 2015 and 2016, livestreaming services gained popularity in China as a form of interactive entertainment. Alibaba identified that trend and launched Taobao live in 2016. Up until then, video reviews of products on video sharing sites were commonplace, but live streaming added a new dimension of interactivity that was simply not possible before. With live commerce, thousands of viewers can pitch questions to Key Opinion Leaders (KOL) who can answer in real time with the actual products on hand.

Perhaps most importantly, these live commerce platforms push links to the product directly to the viewer as the KOL speaks. This creates a window of opportunity during which the KOL can convert a viewer into a buyer. Given the massive size of China’s market, one successful livestream can carry a surprising amount of power. Data from Taobao shows that 12-hours of streaming on Oct 20 by two influencers, Austin Li Jiaqi and Viya, brought in the equivalent of over $2.8bn.5 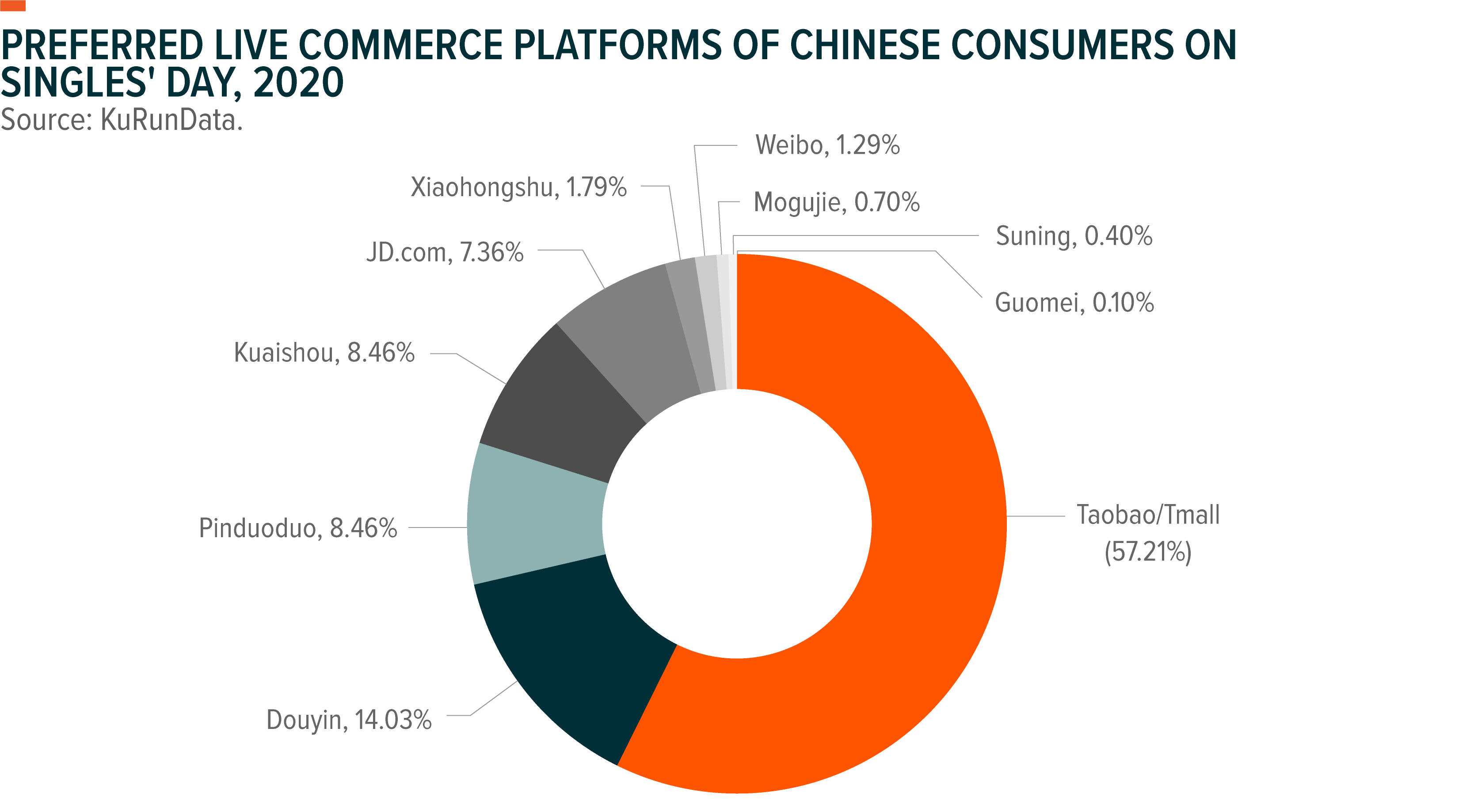 The COVID crisis became a catalyst for further growth in live commerce before Singles Day 2020. In the initial outbreak, Chinese consumers who could not go outside were able to recreate the interactive shopping experience through live commerce. After the dust settled from the initial outbreak, partial lockdowns resulting from sporadic mini outbreaks made staying home an attractive option. Now in 2021, Singles’ Day is coming on the heels of Q3 in which a Delta outbreak dampened desire to travel domestically.

The enormous task of delivering packages to hundreds of millions of consumers is both a challenge and an opportunity for logistics companies. Media reports often use terms that allude to warfare when describing these efforts. Fortunately, a confluence of new technologies like AI, robotics and big data analysis makes this task much more manageable. The adoption of smart logistics is a trend that has changed and will continue to change Singles’ Day.

As logistics for Singles’ Day becomes smarter, there is also a push to make it green. To that end, under the guidance of the China Express Association, major package delivery companies like Shunfeng, Suning Logistics, Cainiao (Alibaba’s logistics arm) and more signed a pledge for a “Green Singles’ Day” this year.6 Alibaba is also signaling its commitment by offering $15.6mn in green vouchers on Tmall and rolling out a massive recycling campaign through Cainiao.7

Power shortages in northeast China are bringing environmental issues and sustainability to the forefront, meaning any “Green Singles’ Day” initiatives could be subject to heightened scrutiny and accountability.

2021 was a pivotal year not only for Chinese consumer internet companies, but for the broader world of Chinese investing. Anti-monopoly investigations launched against tech giants like Alibaba and Jingdong led up to a speech in August by Chairman Xi heralding a paradigm shift towards Common Prosperity. Among other things, regulators are talking about setting a “traffic light” system to manage monopolistic expansion.8

This year’s Singles’ Day will be the first after the Common Prosperity paradigm shift, and after the implementation of significant anti-monopolistic measures in e-commerce. The shift towards Common Prosperity means that there will be a greater emphasis on sustainability and benefiting society this year.

Alibaba was notably fined $2.8bn in April after an anti-monopoly investigation found that it engaged in unfair behavior, like compelling online merchants to pick and commit to only one e-commerce platform. After years of quarrels between e-commerce platforms and complaints from merchants, the fine on Alibaba sent a clear message that the “choose one out of two” practice will no longer be accepted. Later in the year, regulators urged tech companies to stop the practice of blocking links from competitors.9 In response, Tencent will relax restrictions on links to competitors, including e-commerce sites, on its platform WeChat. The anti-monopoly campaign could somewhat level the playing field for Singles’ Day this year and hereafter.

The fight to win over purchases is in many respects a fight to win over the attention of consumers. Social media naturally becomes the battleground for that effort. Companies are looking for ways to pull the Singles’ Day shopping frenzy holiday in their own direction with creative marketing campaigns.

Alibaba added a feature to Taobao this year called the “grass planting machine.” Users enter their shopping needs into the search bar and are met with a flurry of “grass planting” videos and posts by influencers, online celebrities, and stand-up comedians. The feature also includes a lottery and options for charity donation. 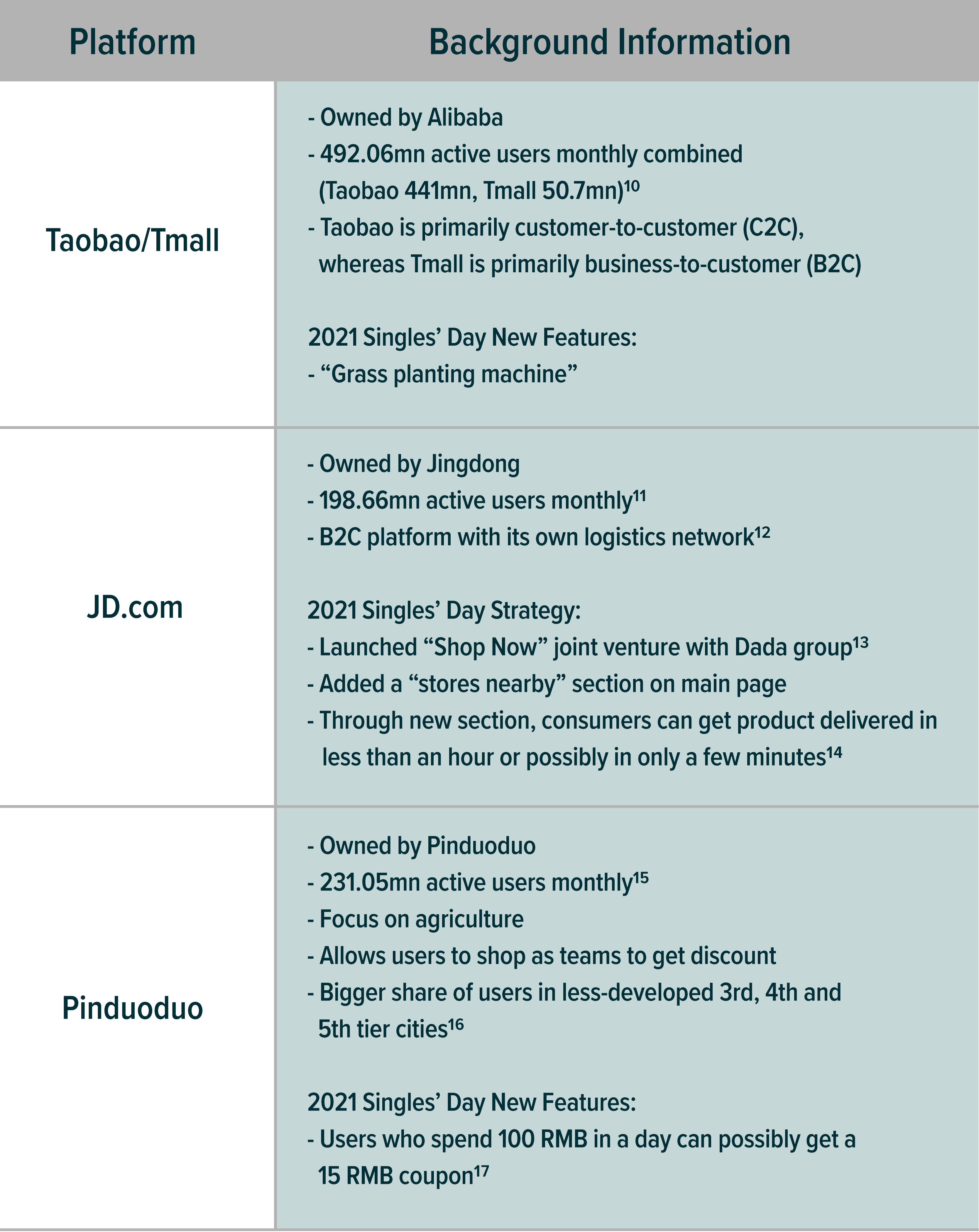 In recent years, e-commerce platforms have introduced new payment schemes to entice consumers to hit the purchase button. One such example is the use of installment plans in which buyers pay a deposit ahead of Singles’ Day, and then pay off the rest of the balance later. The approach is similar to Buy Now, Pay Later (BNPL), which western e-commerce giants have promoted successfully to their shoppers. In 2020, an online slang word that roughly translates to “balance payers” went viral on the social media platform Weibo. It jokingly refers to young consumers who rely too much on the balance payment scheme only to regret it afterwards.

The use of balance payment schemes began years ago and is not unique to 2021. What is unique to 2021 in terms of fintech is the advent of the Digital Yuan (eCNY). The Digital Yuan is digital currency issued by the People’s Bank of China and its value is tied to the RMB. Throughout 2021, the Chinese government has encouraged the public to download its digital wallet app and use eCNY for transactions. Digital Yuan is still not widely adopted, but it has the potential to compete with dominant fintech tools like Alipay and WeChat Pay, both of which are pivotal for e-commerce.

After a year of significant regulatory shifts and efforts to maintain the economic recovery amid unexpected challenges, Singles’ Day will be a good indicator of the future of Chinese e-commerce and consumption patterns. The trends of live commerce, new payment schemes and green logistics have reshaped Singles’ Day over the past few years. While those trends continue to have an impact, this year will stand out because of significant anti-monopoly actions and the Common Prosperity shift. The effects of these trends and unexpected headwinds in Q3 and Q4 add some uncertainty this year, but Alibaba’s Singles’ Day GMV is expected to reach $85bn this year, up from $74.1bn in 2020.18

8. CPC Central Commission for Discipline Inspection, “Setting a traffic light for capital expansion: Anti-monopoly is about more than freedom to listen to songs, it is about fair market competition,” Sep 11, 2021.

Investing involves risk, including the possible loss of principal. International investments may involve risk of capital loss from unfavorable fluctuation in currency values, from differences in generally accepted accounting principles, or from economic or political instability in other nations. Emerging markets involve heightened risks related to the same factors as well as increased volatility and lower trading volume. Securities focusing on a single country and narrowly focused investments may be subject to higher volatility. Investments in securities in the Technology sector are subject to rapid changes in technology product cycles; rapid product obsolescence; government regulation; and increased competition, both domestically and internationally, including competition from foreign competitors with lower production costs. Technology companies and companies that rely heavily on technology tend to be more volatile than the overall market, and are also heavily dependent on patent and intellectual property rights. The Global X International Access Suite Funds are non-diversified.