Greece continues to shine in 2019 – a rare bright spot in a Eurozone coming to grips with the need for more potent stimulus and structural reforms. Improving macro data, proactive policy from the New Democracy party and a strengthening financial sector have market participants increasingly bullish on Greece’s long-term growth trajectory. Up roughly 43% year to date, the Global X MSCI Greece ETF (GREK) has demonstrated what appears to be a growing optimism in an economy that’s been battered in recent years.

For important performance information for GREK please click here. The performance data quoted represents past performance and does not guarantee future results. High short-term performance of the fund is unusual, and investors should not expect such performance to be repeated. 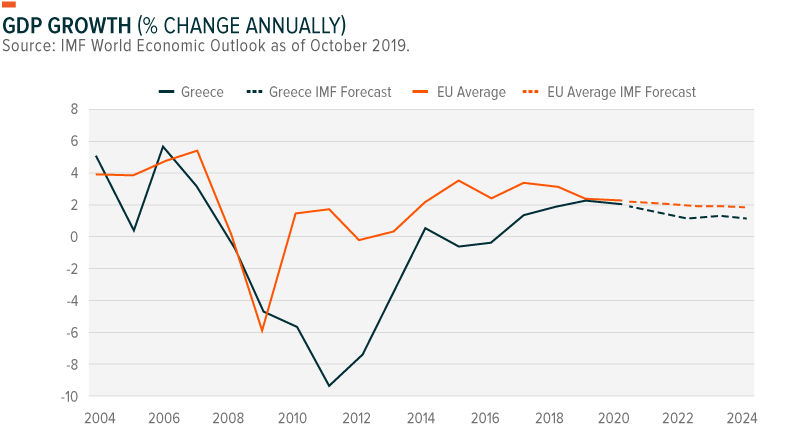 The new government raised its 2020 GDP forecast to 2.8%, meaningfully higher than the 2.0% projected for 2019. The International Monetary Fund (IMF) projects a slightly lower 2.5%, while the European Commission remains tempered at 2.2%.

With a growing economy and fiscal restraint, the IMF expects Greece’s debt of GDP ratio to decline over the next several years, with liquidity risks abating and cash buffers now robust. The government projects public debt to fall to 167.8% of GDP in 2020 from an expected 173.3% of GDP this year.

The draft budget was decidedly business-friendly, the fulfillment of a New Democracy campaign promise. Notable highlights included tax cuts for households and the private sector. The government proposed measures to crack down on tax evasion as well, a persistent problem in Greece.

In addition, New Democracy lifted the capital controls implemented during Greece’s debt crisis in 2015. It’s part of a concerted effort to reassure markets that a return to normal is underway. Greek banks have almost fully repaid the liquidity the European Central Bank (ECB) provided, and a deal is in place for Greece to repay about a third of the 8.5 billion-euro bailout debt it owes the IMF earlier than expected.

Without the capital controls, it’s now easier for investors to move funds through Greece’s financial system, which New Democracy hopes will further stimulate foreign direct investment (FDI). Plans to lower the primary surplus from 3.5% to 2% would increase spending, potentially stimulating additional growth and opening the door for credit rating upgrades.

The financial sector continues to strengthen as Greece’s banks dig out from heaps of bad debt. The latest step is the Hercules Asset Protection Scheme (HAPS), which intends to reduce non-performing loans (NPLs) exposure on Greek bank balance sheets by as much as 30 billion euros, or by roughly 40%. Now European Commission-approved, the program allows Greek banks to clean up their balance sheets by transferring bad loans to special purpose vehicles (SPVs) that issue senior, mezzanine and junior bonds.

Importantly, the issuance comes with a government guarantee for senior tranches. The guarantee will not affect taxpayers, nor will it risk the cash buffer of roughly 32 billion euros that the government has built from unused bailout funds and bond issues.

The program marks the continuation of a trend that has the market increasingly positive on Greece’s financial sector; since the end of 2018, Greek banks have trimmed their bad loans by 81.8 billion euros.

Global growth slowing and European demand weakening could crimp Greece’s momentum given its dependence on tourism and exports. But Greece has potential offsets for the first time in years, namely a healthier domestic economic outlook that includes improvements in its current account, employment, consumption and business condition metrics.

Greece also boasts renewed investor interest in the industrial and real estate sectors. Industrial production is up 1.6% year to date (YTD) with PMI levels at 53.6 in September well above contractionary levels in Broad Europe. 1 Last year, FDI rose by 9% — nearly 75% of which focused in services. The focus on FDI into services is related to the liberalization of the telecommunications sector, increased trade, and greater tourism, which stimulates investment into real estate and logistics.2 Tourism has helped housing prices throughout Greece as well, increasing on average by 7.7% year-over-year (YoY).3

Greece continues to normalize at a time when political and market risk seem muted under New Democracy’s policy approach. And the bond market offers proof of why Greece looks like a compelling investment. Recently, yields on Greek bonds went negative, meaning investors now essentially pay the country to borrow money. For Greek equities, the factors that helped turn yields negative, including ECB rate cuts and improving sentiment, could be a tailwind. As such, we believe investors could increasingly seek exposure to undervalued equities in Greece.

GREK: The Global X MSCI Greece ETF (GREK) invests in among the largest and most liquid companies in Greece.ents

Carefully consider the Fund’s investment objectives, risks, and charges and expenses before investing. This and other information can be found in the Fund’s summary or full prospectuses, which may be obtained by calling 1-888-GX-FUND-1 (1.888.493.8631), or by visiting globalxetfs.com. Please read the prospectus carefully before investing.