The Q3 2022 Global X International Report can be viewed here. The report summarizes market and macroeconomic developments across our International Access suite of ETFs. For a closer look at China Sectors, please see the latest China Sector Report: Q3 2022.

Equities around the world tumbled in one of the more challenging periods in this cycle, with the MSCI All Country World Index (MXWD) posting losses of -15.66%. As investors began to debate the likelihood of a recession in the United States, the Federal Reserve aggressively hiked interest rates in an effort to tame higher than expected inflation, in a move that will inevitably have knock-on effects for global markets. Political risks persisted into Q2 as Pakistan and Colombia experienced uncertain changes in leadership, all while the war in Ukraine continues to push Europe towards an energy crisis. Meanwhile, despite enduring a protracted lockdown in Shanghai that compounded supply chain woes, Chinese equities surprised to the upside with positive returns in Q2.

Challenges abounded in markets around the world, but these were not limited only to emerging markets. The U.S.-based S&P 500 decreased by 16.45% in Q2 2022, underperforming both the MSCI Emerging Markets Index (MXEF) and MXWD. The MXEF outperformed the MXWD, returning -11.45% against ‑15.66% for the MXWD. Among Global X’s single country and regional funds, five outperformed the MXWD while six underperformed it. 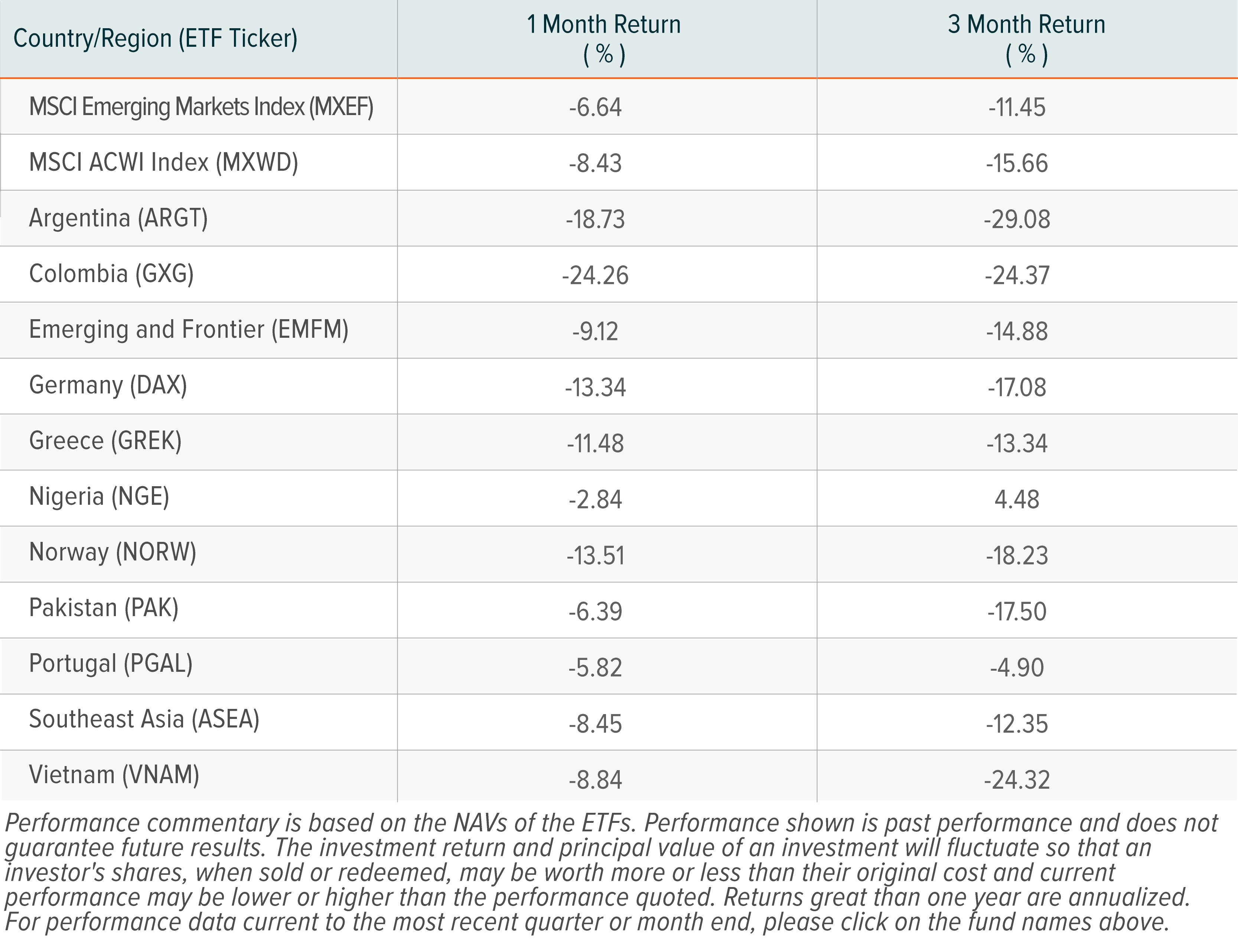 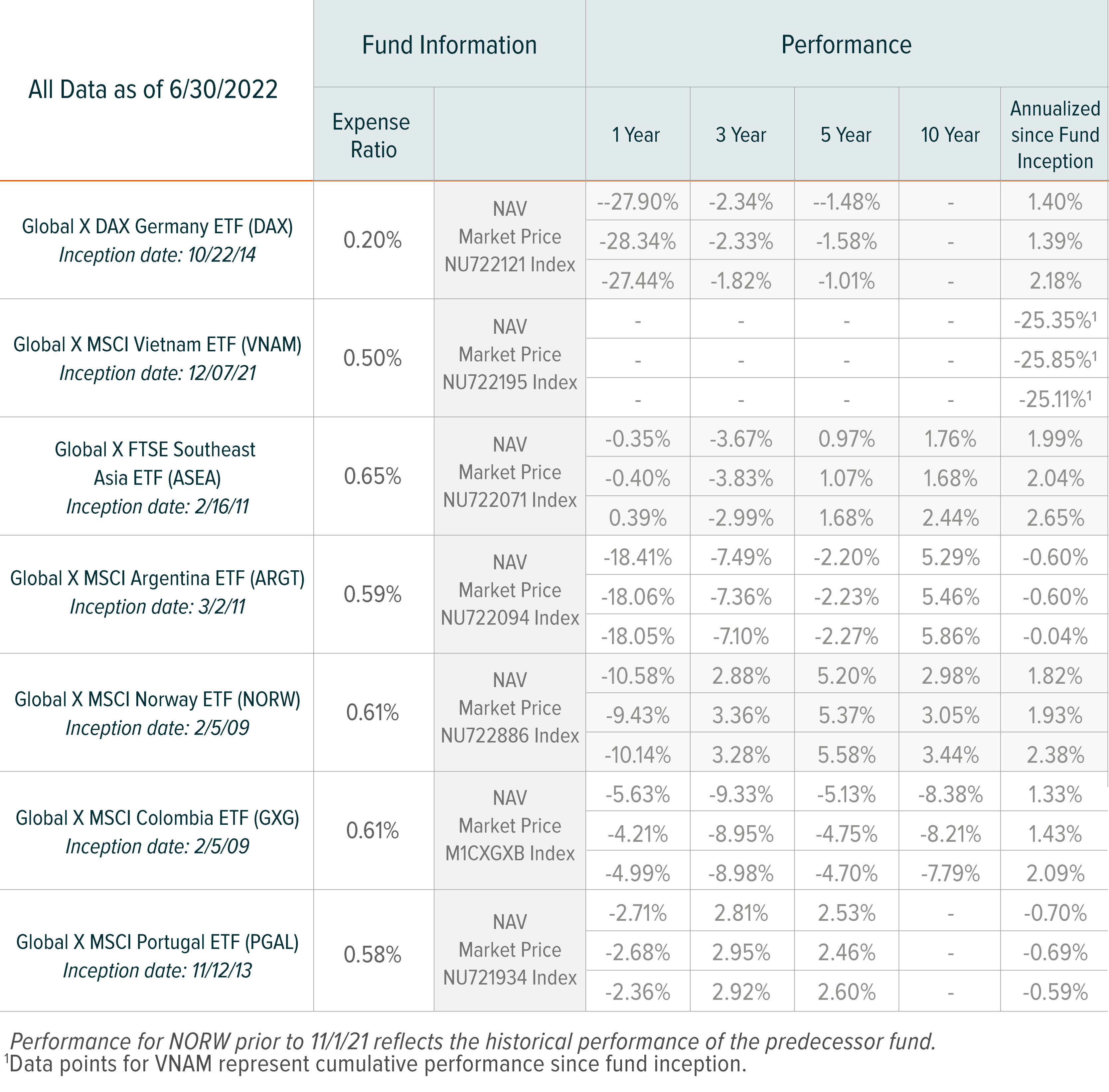 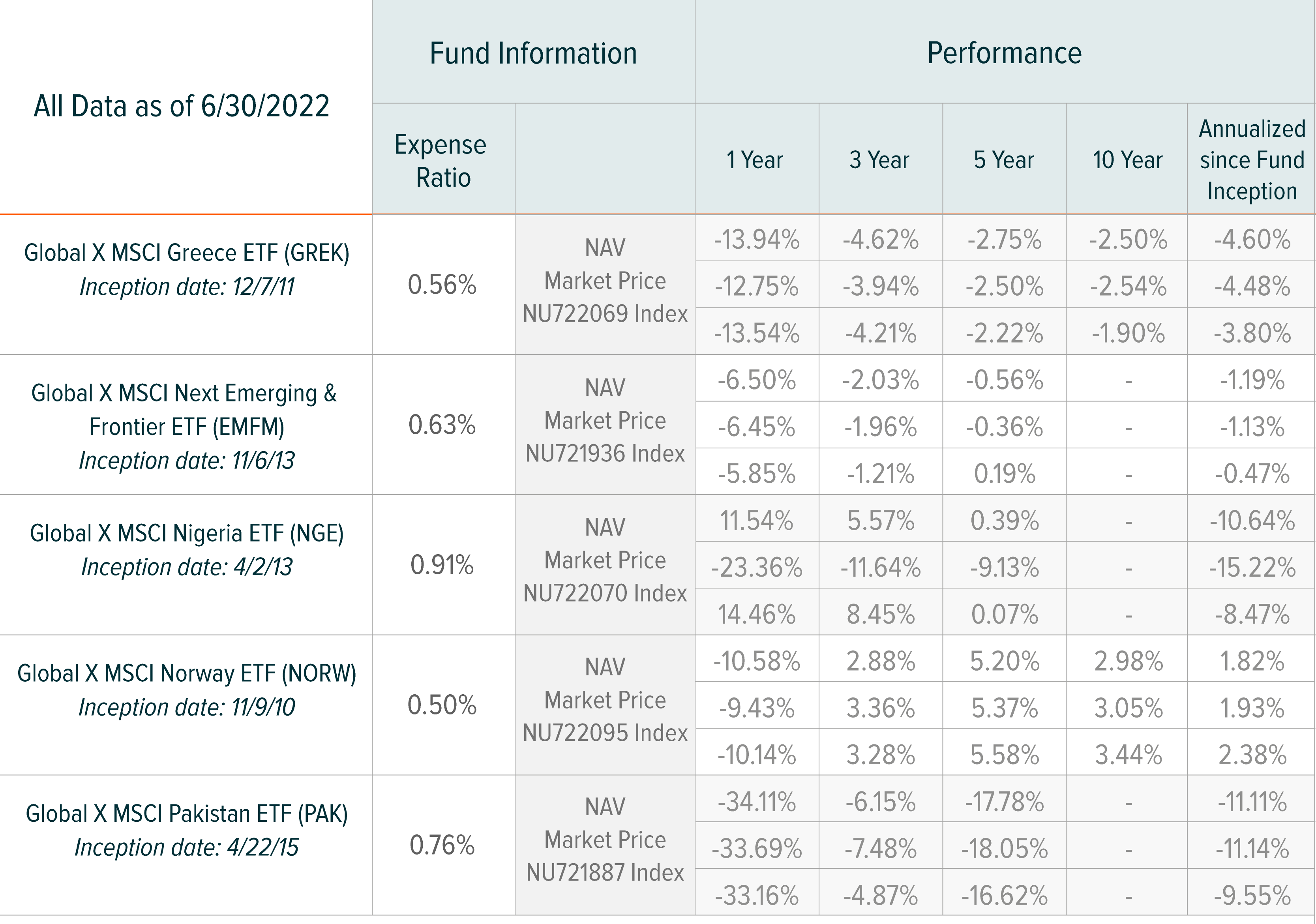 The Global X MSCI Nigeria ETF (NGE) was the best performer in Q2 2022, with returns of 4.48%. Although Nigeria is an exporter of crude oil, its position as a net importer of refined products paired with the burden of its fuel subsidies is largely cancelling out benefits from elevated oil prices. Furthermore, NGE has no direct exposure to Energy companies. Instead, Nigeria’s resilient performance amid a gloomy global environment can be attributed to strong company earnings but also dollar shortages at the central bank that are making it difficult for foreign investors to withdraw money.1 In fact, in Q2 the Naira plummeted and suffered its second-worst quarter of depreciation as the dollar scarcity resulted in Nigerian banks reducing dollar limits on debit cards and a reported backlog of $450mn in revenue that has yet to be repatriated to foreign airline operators.2

The suite’s second best performer in Q2 2022 was the Global X MSCI Portugal ETF (PGAL), which posted losses of -4.90%. PGAL’s tilt towards defensive non-cyclical sectors likely worked to its advantage as the global environment became adverse. Over half of PGAL is allocated to these sectors, with 49.4% to Utilities and 10.2% to Consumer Staples, as of Jun 30, 2022. This defensive allocation helped cushion the impact of a 0.2% quarterly-basis contraction in Portugal’s economic output in Q2.3  Lax growth in domestic demand contributed to overall negative returns for PGAL in Q2. Looking forward, the EU commission forecasts 6.5% growth for Portugal in 2022, with a strong increase in tourist inflows playing an important role.4

The two Latin American funds in the suite were hit the hardest in Q2. ARGT delivered the lowest returns at ‑29.08%, as the country experienced painfully high inflation and disagreement within the government. In Q2, inflations levels reached 64% and could possibly increase to around 90% by the end of the year.5 The Economy Minister who helped negotiate a deal approved by the International Monetary Fund in March abruptly resigned just after the end of Q2, only a few weeks after Vice President Kirchner criticized his policy approach.6 Going forward, all eyes will be on the new Economy Minister Sergio Massa, who is starting the role after his predecessor Silvina Batakis served for only a month.

Meanwhile, Colombia faced an uncertain election that ultimately resulted in the country’s first left-wing president. The polarizing election prompted a kneejerk selloff that resulted in the Global X MSCI Colombia ETF (GXG) posting losses of -24.37%. With the establishment candidate being knocked out in the first round of voting, either choice likely would have prompted such a selloff. Investors are trying to assess President-Elect Gustavo Petro and some are spooked about his skepticism towards oil and plans for pension reform.

Rising inflation and the European Central Bank’s hawkish rate hike of 50 basis points clouds the outlook for the Eurozone in Q3.7 As the war in Ukraine drags on, the possibility of Russia cutting off gas flows looms over Europe, resulting in the term “rationing” entering public discourse. Germany in particular is exposed should gas flows from Russia be abruptly halted. The convergence of headwinds led to Germany recording flat growth in Q2 and Q3 will likely come in low as well before Germany eventually recovers.8 On the other hand, although not a member of the Eurozone, we believe Norway will play an important role acting as a pillar of stability for the European energy industry. Norway alone cannot cover all of Europe’s needs, but with its Energy sector firing on all cylinders, it can certainly help cushion the impact. The state-owned oil and gas giant Equinor beat earnings expectations in Q2 as its gas output climbed by 18% year-on-year, and we believe that the tailwinds that led to this strong Q2 performance will persist into Q3 and possibly beyond.9

Southeast Asia shows some promise even as it grapples with the same headwinds many other countries are facing. In July, despite cutting growth forecasts for most countries, the Asian Development Bank (ADB) upgraded its 2022 forecast for the Philippines and Malaysia from 6.0% to 6.5% and 5.0% to 5.2% respectively.10 At the same time, Southeast Asian currencies have held up relatively well against the rising dollar compared to the JPY, KRW, EUR and GBP, with the Indonesian Rupiah and Singapore Dollar holding up particularly well.11 Considering how Southeast Asia has abandoned the zero-COVID approach, investors may try to seek refuge here should another lockdown occur in China. 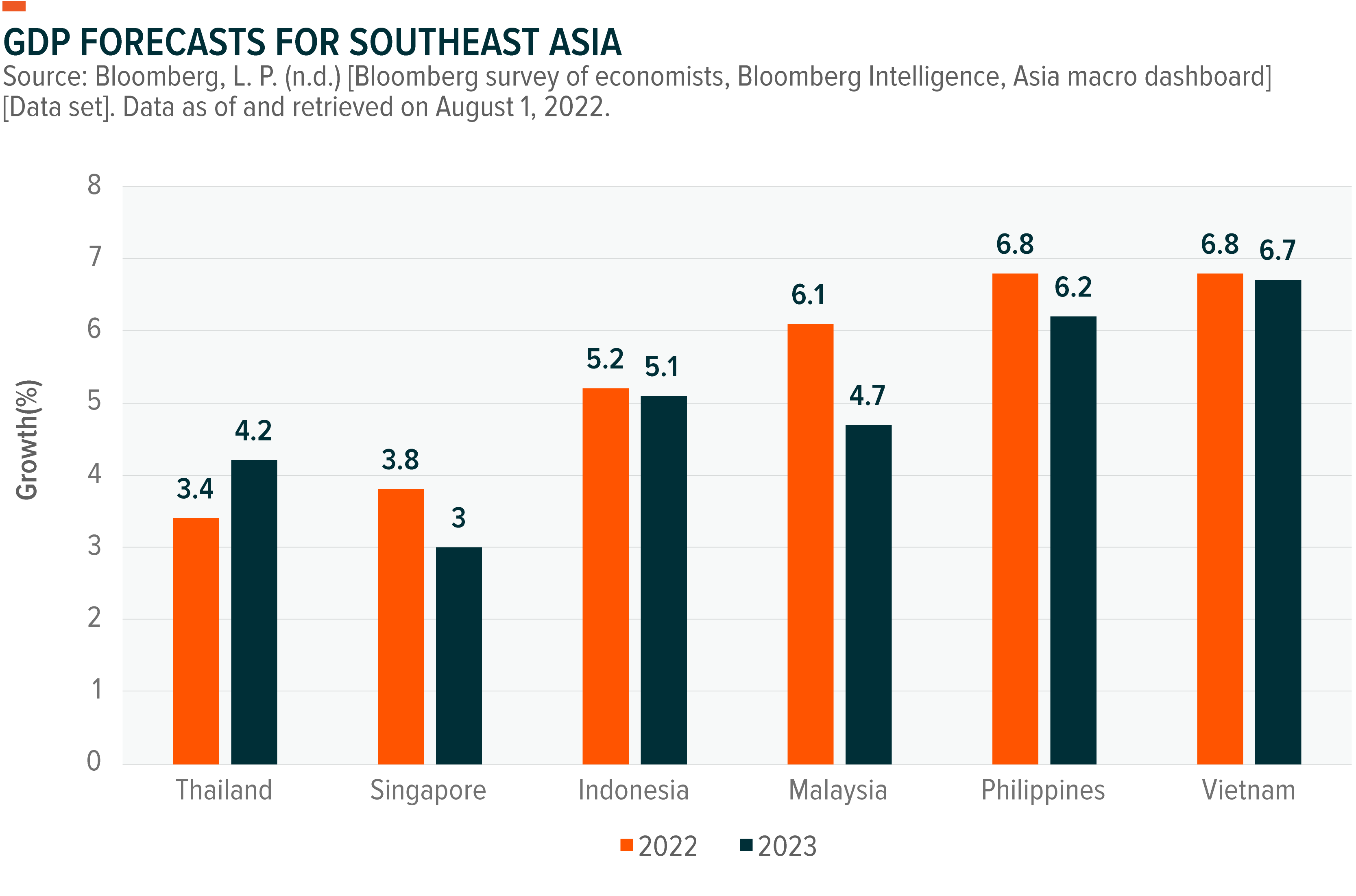 Meanwhile, some opportunities may be found in Vietnam. Vietnamese markets pulled back in Q2 mainly due to retail anxiety and negative headlines on strong-armed government intervention in corporate bond issuance. However, Vietnam’s macro story looks strong thus far, with Q2 growth coming in at 7%, above the government’s 6-6.5% target, and yearly growth possibly beating expectations as well.12 Because of the markets pulling back in Q2, this may be a good time to buy quality Vietnamese assets at a relatively cheap price.

In Latin America, despite delivering volatile returns in Q2, we believe Colombia will recover as post-election anxiety subsides. Markets became anxious in part because Petro is the first leftist president in Colombia’s history, and some worry he will implement radical policies. The fact that Petro felt the need to sign a pledge not to expropriate private property speaks to those anxieties.13 We cannot speak to every policy of Petro, but we do not believe he will be a threat to Colombia’s stability. Indeed, some early signs of moderation are emerging even before Petro enters the Casa de Nariño this August. Petro’s moderate pick for Finance Minister, a seasoned economist who recently taught at Columbia University, is a positive sign.14 With the broad coalition Petro is making, compromise will also be necessary.15 If this trend of compromise and moderation continues as we believe it will, markets should pick up on it and Colombian equities will likely rebound. 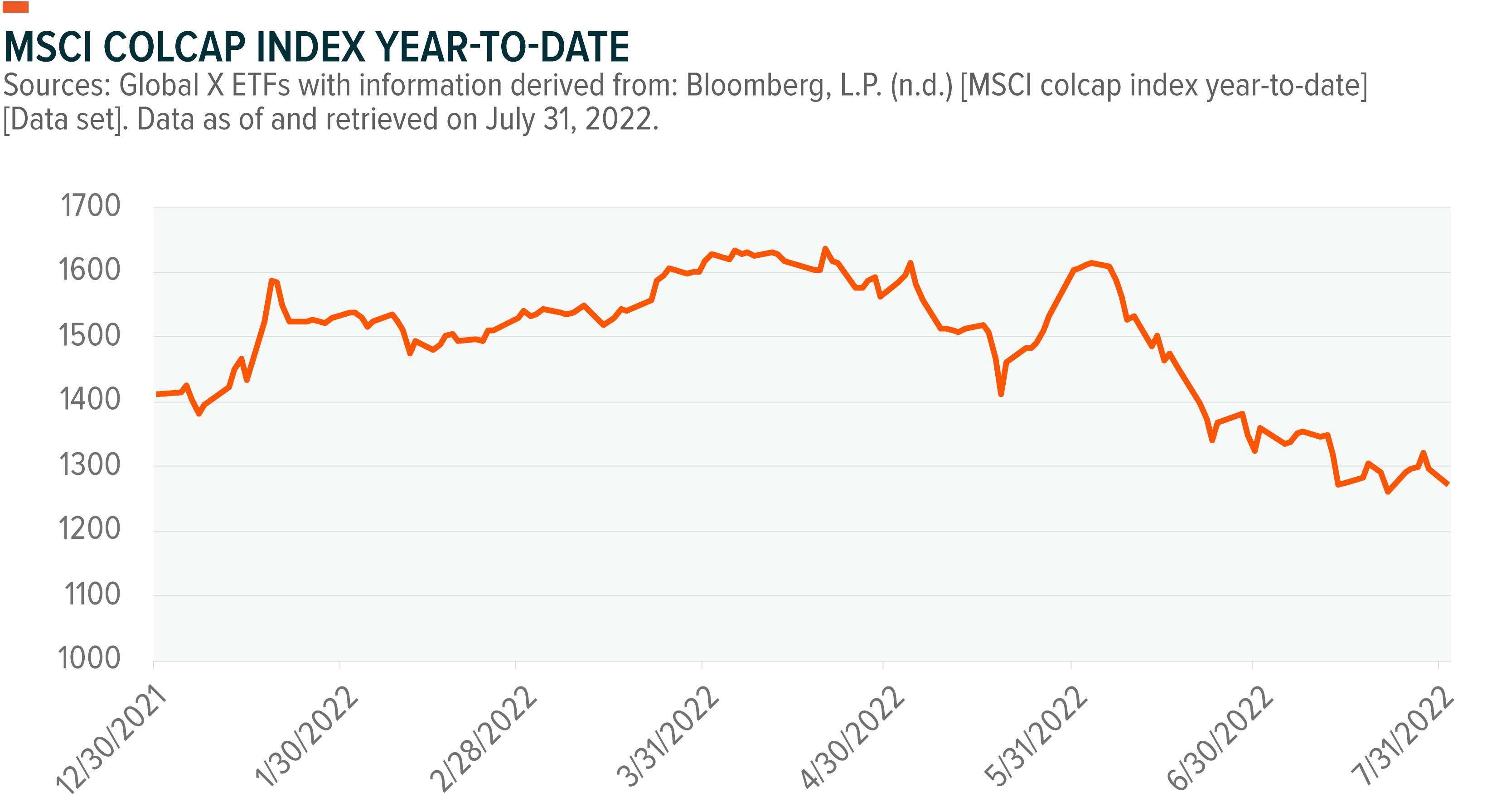 Note: Colombian equities experienced a selloff in the aftermath of the presidential election and are starting off Q3 at a relatively low position.

MSCI COLCAP Index: The MSCI COLCAP Index is designed to represent the performance of the domestic Colombian equity market, and aims to include a minimum of 25 securities and 20 issuers based on free-float-adjusted market capitalization liquidity and international investability criteria.

This material represents an assessment of the market environment at a specific point in time and is not intended to be a forecast of future events, or a guarantee of future results. This information should not be relied upon by the reader as research or investment advice regarding the funds or any stock in particular.