Biotechnology combines cutting edge technological advancements with biological research and applications to develop new medical processes, treatments, and products. While humans have used biological processes and microorganisms throughout history, from creating food products such as bread to developing new vaccines and drugs, biotech remains as critical as ever to the future of healthcare. It allows us to transform naturally occurring organisms and processes into powerful weapons against the world’s most aggressive diseases, conditions, and illnesses. The biotech industry is a segment within the health care sector that includes companies researching and developing some of the most innovative solutions to major health crises and life-threatening conditions.

While biotech is transformative for the health care sector, its disruptive force is felt across other sectors as well, due to the endless applications for biological organisms, processes, and technologies. Beyond medical applications, biotech can be used in the energy and manufacturing spaces to reduce emissions and waste and optimize operations. In agriculture, farmers utilize biotech research and products to enhance crop resistance to insects or weather and to produce food using more sustainable practices.

Recognizing the power and potential of biotechnology, Chinese authorities, businesses, and universities are increasingly focusing on developing the country’s domestic biotech industry. Their motivations are not only to become globally competitive in a rapidly growing industry, but also to address critical domestic challenges like an ageing population, food security, and global pandemics.

While health care only began privatizing in the 1990s, China rapidly grew into the world’s second largest pharmaceutical market because of its large population and shifting demographics, consumption trends, technology usage, and government policies. As such, China’s broader health care sector is projected to be worth $2.4 trillion by 2030.1

With the rise of the broader health care sector, China’s biotech industry is already among one of the fastest growing in the world and is expected to mature from its infancy to a global leader.  At just one-tenth of the size of its counterpart in the US, there appears to be ample room for continued growth.2 And while the sector grows in size and prominence, several Chinese firms are already actively disrupting the global biotech industry through cutting edge research and extensive international partnerships.

At an estimated $6.2 billion in annual sales, the China biotech industry’s biologics and medical technologies segment is just a fraction of its $116 billion US counterpart.3 The biologics segment includes biopharmaceutical companies as well as others that use cutting-edge technologies and living organisms, including proteins, sugars, cells and tissues, to create a range of novel vaccines, gene therapies, and genetic-based treatments. According to the US Food and Drug Administration (FDA), China is the second-largest exporter of drugs and biologics to the US, and the largest exporter to the US for medical devices.4 Many over-the-counter or generic drugs sold in the US, including HIV/AIDS medications, chemotherapy treatments, and medication for Alzheimer’s and Parkinson’s disease, and diabetes, also originate from China.

Biosimilars, or close equivalents and exact copies of original biologics products, are also beginning to take off in China as Beijing promotes alternatives to curb rising spending costs and implements a stronger regulatory framework. This includes drugs like Rituximab, which treats autoimmune diseases and cancers, which was developed by Shanghai Henlius Biopharmaceutical. In the coming years, biosimilars are expected to play an even larger role in China’s biotech sector, with roughly $113 billion of the $299 billion in annual global biological sales involving patents that expire by 2023, meaning a wave of new biosimilar drugs could be quickly brought to market.5

Due to its relatively smaller size, the growth of China’s biologics segment is substantially higher than the US’s. The segment experienced 30% growth from 2015-2018, and is expected to achieve 40% growth through 2023.6 China-based biologics companies may have significant advantages in trialing and reach because of lower costs, vast access to data, and the unique characteristics of China’s enormous population.

Life sciences & tools is another important segment within China’s biotech industry, and includes major names like Wuxi Biologics, a global leader in biologics outsourcing. Wuxi is China’s largest contract development and manufacturing organization (CDMO) for vaccines and other biologics. Companies including Wuxi are fueled by global partnerships, as they leverage manufacturing while complying with international standards.

Another critical sub-industry is agriculture biotech, which accounts for $8.1 billion in annual sales. While the size of this sub-industry is not necessarily reflected in public markets yet, many of the firms in this segment are critical to scaling China’s food supply and ensuring food security. Although there are significant restrictions within the sector – namely, restrictions on genetically modified organisms (GMOs) in food and livestock– there is recent evidence of a relaxation of some of these rules, which may make the segment ripe for further disruption.

China’s biotech industry is expected to continue its trajectory, fueled by a series of tailwinds such as changing domestic consumption patterns and demographics, greater access to capital, and national legislation encouraging biotech innovation.

By 2027, China’s senior citizen population will double, meaning 324 million Chinese will be over the age of 60.7 At the same time, China’s younger populations now have deeper pockets to cover the costs of specialized pharmaceuticals, biomedical devices, and services for its aging relatives, due to steadily rising wages and the lingering impact of China’s one child policy.  Over the long-term, China’s growing wealth and aging population are expected to play a large role in powering the 10-15% health care growth estimates from analysts, and driving substantial demand for pharmaceuticals.8 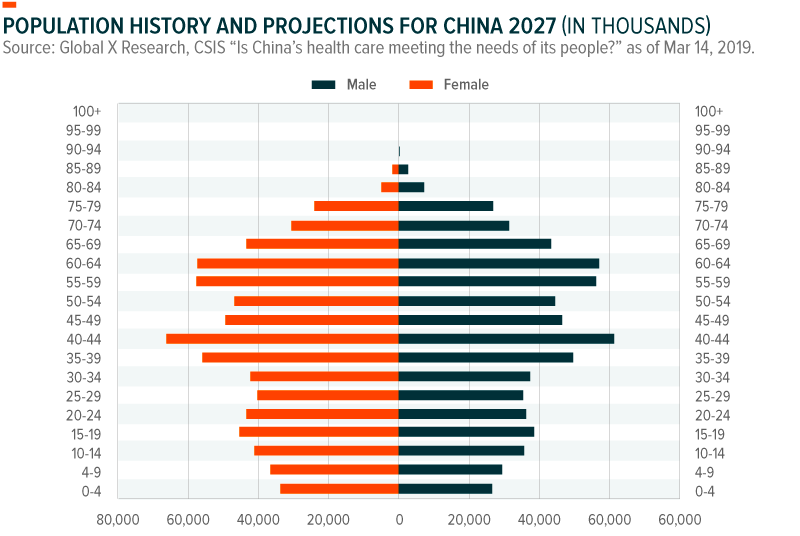 While the government provides nearly universal health coverage for low-end services, private health insurance offers more comprehensive coverage. Yet private health insurance coverage remains in just the single-digits. Similarly, penetration rates for sophisticated services like radio-therapy remains in the teens. As China’s health care market continues to mature, the prevalence of private insurance, high end medical treatments and specialty drugs including biologics, and even regular checkups and diagnostics are all expected to increase rapidly from their low bases.12

Increased demand for biologic drugs and therapies treating oncological or rare diseases, and the expansion of genetic engineering, specialized medicine, and clinical trials, have prompted many foreign firms to outsource development and production to China’s contract research organizations (CROs) and contract manufacturing organizations (CMOs). In addition, certain multinational firms like Charles River Laboratories have invested aggressively in Chinese biotech firms and are shifting towards localized production models.13 Although the time to market for drug approvals in China still lags the US and Europe, China cut down the lag time drastically in recent years from an 84-85 month lag in 2017 to a 28-31 month lag in 2018.14 Since then, China continued to minimize drug approval times while providing a fast-track accelerated review process for high priority drugs such as those treating Ebola.

Chinese biotech firms have flourished thanks to the deep pockets of venture capital (VC) and private equity (PE) firms, in addition to policies that have helped ease the IPO process. In just three years, from the beginning of 2015 to 2018, investments from VC and PE firms into the healthcare space roughly quadrupled from approximately $12 billion RMB to approximately $48 billion RMB.15 And in 2018, rule changes at the Hong Kong Stock Exchange began to heavily incentivize firms in the biotech industry to list in Hong Kong, rather than foreign exchanges. Following those changes, 17 mainland Chinese biotech firms raised $5.12 billion through their IPOs.

Meanwhile, outside of China, firms with significant international partnerships with major U.S.-based pharmaceutical companies, like Beigene and Legend Biotech, have parlayed their global reach to achieve successful public listings on the Nasdaq, raising further capital for the industry.

As an official “Strategic Emerging Industry” and explicitly named in the Made in China 2025 plan, China’s biotech industry is strongly supported by the government through R&D programs, infrastructure and development programs, and urban planning initiatives.

Moving away from the drug replication model, China is now becoming an innovative global leader in biotech. This is the result of long-term commitments from Beijing and heavy investment from the public and private sector to build out the biotech industry from the ground up with investments in R&D, education and training, and infrastructure. While the US continues to lead in biotech R&D investments, Chinese firms have surpassed the US in number of biotech patents, suggesting that biotech activity is expected to ramp up over the coming years as China narrows the gap with its much larger US biotech rival.20

A particular focus in China is leveraging artificial intelligence within the biotech space to take advantage of China’s deep data pool, driven by its large population and laxer regulatory environment surrounding data collection and use. Focusing the country’s increasing technological prowess on the health care sector could unlock new drug discoveries, and treatments, while reducing research costs.

Drug approval policies in China favor drugs initially or exclusively produced and trialed domestically, encouraging foreign and domestic biopharmaceutical firms to form mutually beneficial partnerships. Another common way for foreign firms to gain access to the Chinese markets is by acquiring rights to medicines in later stages of development to commercialize them in China, which is then used as funding for additional studies to expand use.

Another competitive advantage China offers for biotech firms is the cost and sophistication of China’s labor force. Compared to the US, Chinese labor is relatively cheaper across the industry, while the talent pool is highly trained and often includes Chinese and foreign graduates of top US, European, and Chinese higher education institutions.

The Global X China Biotech Innovation ETF offers targeted exposure to a quickly growing subset of China’s health care industry. Biotech companies stand at the critical intersection of changing demographics and consumer behaviors, as well as rapid advancements in technology, making them a key priority in the government’s ‘Made in China 2025’ strategy. With supportive regulatory policies and growing access to capital, Chinese biotech firms are quickly closing the gap with their US counterparts, expanding to become not just a powerful domestic industry, but a global leader.

2. Gryphon Scientific and Rhodium Group, “China’s Biotechnology Development: The Role of US and Other Foreign Engagement,” Feb 14, 2019.

16. CEPA is the Closer Economic Partnership Arrangement, a free trade agreement signed by Mainland China and Hong Kong in 2003, which covers trade in goods and services, as well as investment and technical cooperation.

20. Baker McKenzie, “US Continues to Lead in Biopharma Activity, China’s Rapid Pace of Innovation Ramps Up and Europe Continues as Solid Breeding Ground for Biopharma,” Feb 10, 2020.

Investing involves risk, including the possible loss of principal. International investments may involve risk of capital loss from unfavorable fluctuation in currency values, from differences in generally accepted accounting principles, or from economic or political instability in other nations. Emerging markets involve heightened risks related to the same factors as well as increased volatility and lower trading volume. Investments in securities in the Biotechnology and Health Care sectors can be affected by government regulations, rapid product obsolescence, intense industry competition and loss or impairment of patents or intellectual property rights. Technology companies and companies that rely heavily on technology tend to be more volatile than the overall market, and are also heavily dependent on patent and intellectual property rights. Securities focusing on a single country and narrowly focused investments may be subject to higher volatility. CHB is non-diversified.