In the second quarter of 2021, China’s economy grew at a pace of 7.9% year-on-year. Most forecasts put China’s expected rate of growth for the whole year of 2021 at somewhere between 8.0% and 9.0%. Despite an overall optimistic outlook for 2021, Chinese officials recognize the unbalanced nature of China’s recovery as consumer demand lags behind target levels. Growth in retail sales slightly decreased from 12.4% in Q1 to 12.1% in Q2, while fixed asset investment (FAI) undershot expectations at 12.6%.1 China notably cut its required reserve ratio by 0.5% in July, in a move that has prompted speculation over whether China will shift towards more monetary easing.

The rapid increase in vaccinations abroad is changing the external environment that defined much of China’s economic growth over the past year. As developed countries move into the post-pandemic New Normal Economy, demand for Chinese exports of products like electronics and masks could fall. On the domestic side, China’s rollout of the vaccine is moving at a rapid pace, but it still seems unlikely that borders will fully reopen in 2021.

Eight of the eleven major economic sectors in China generated positive returns in Q2. Health Care took the lead with returns of 19.66%, possibly supported by a surge in birth and fertility company stocks after the release of census population numbers and the subsequent announcement of the three-child policy. 2 Communication Services, Financials and Real Estate produced negative returns. 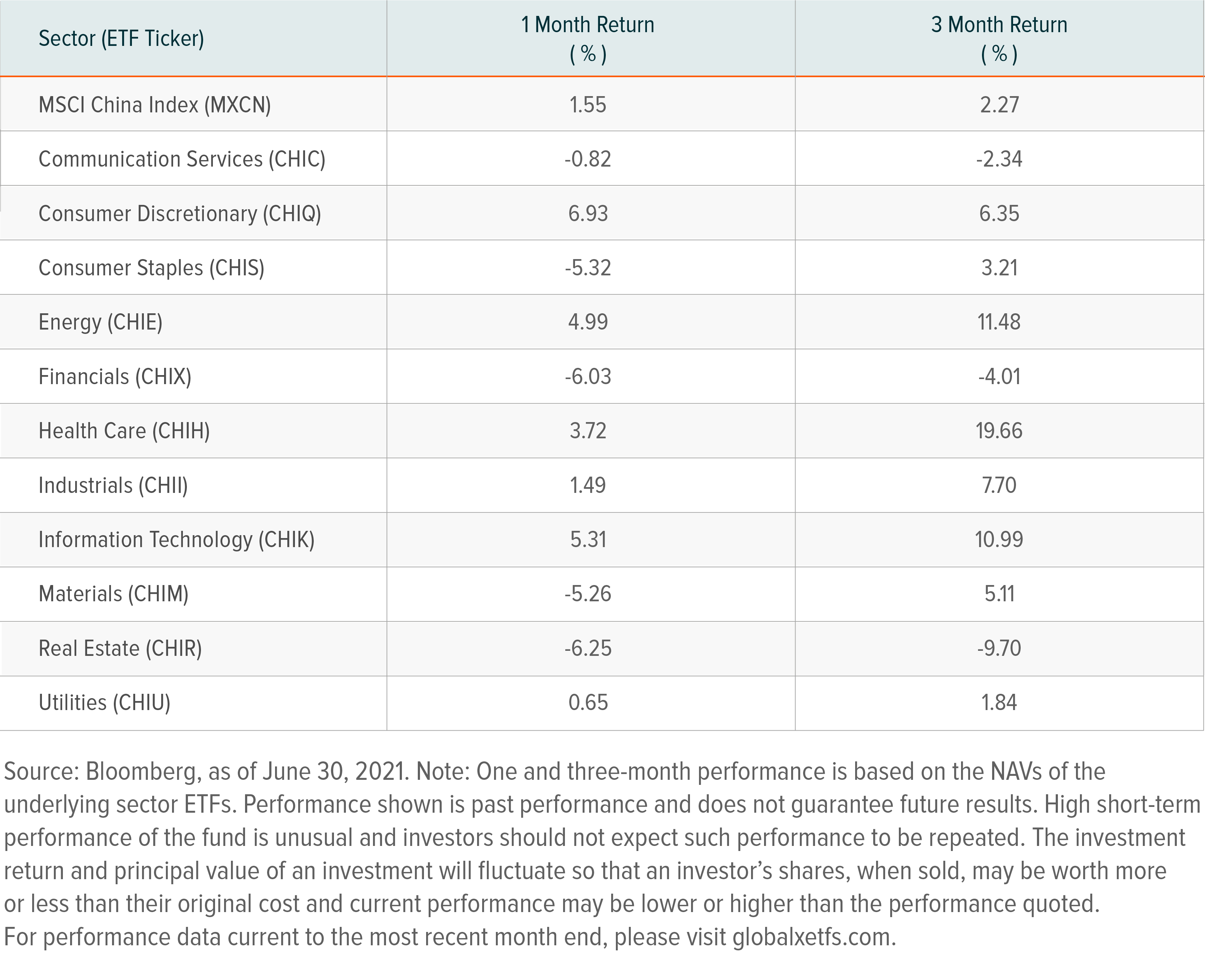 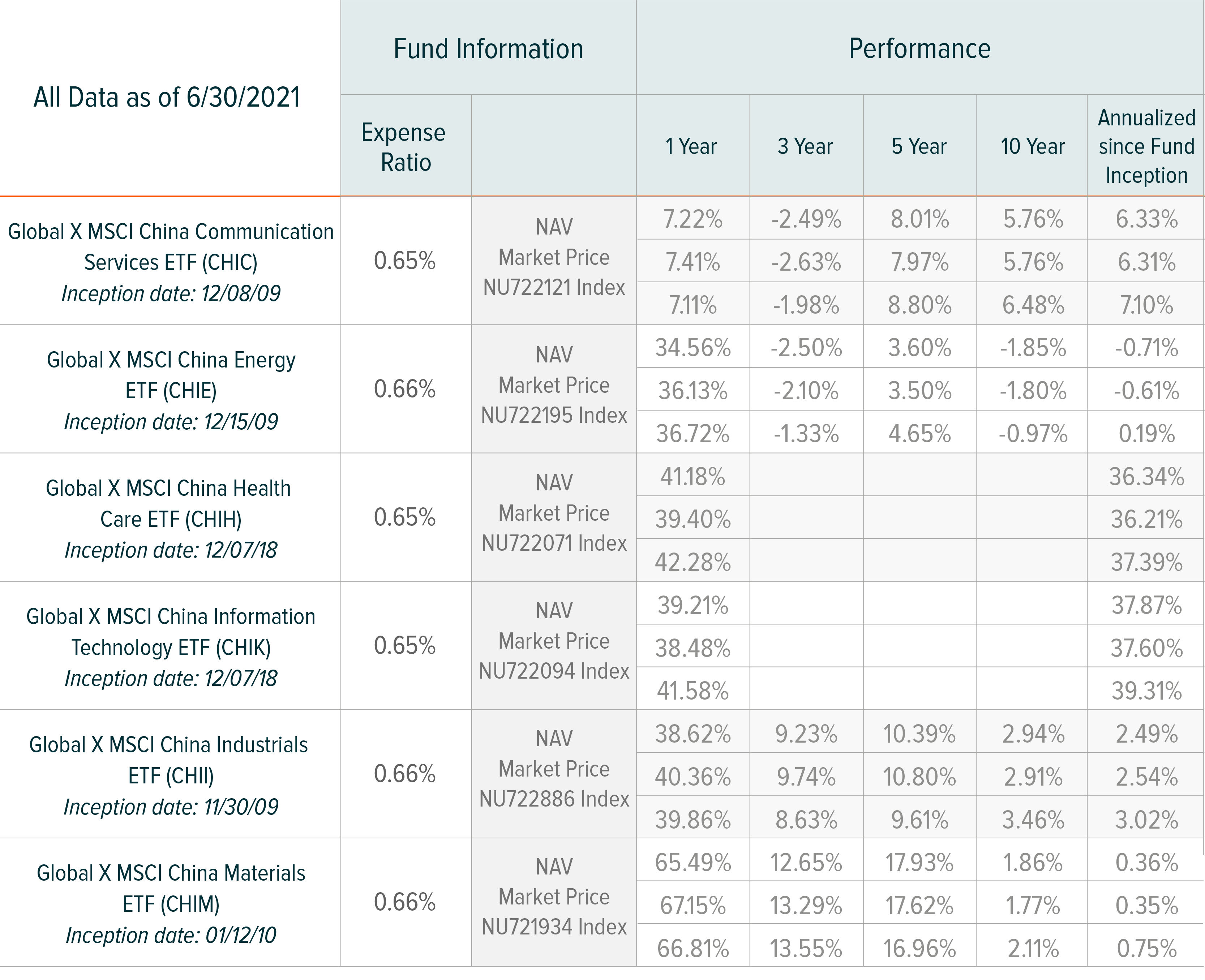 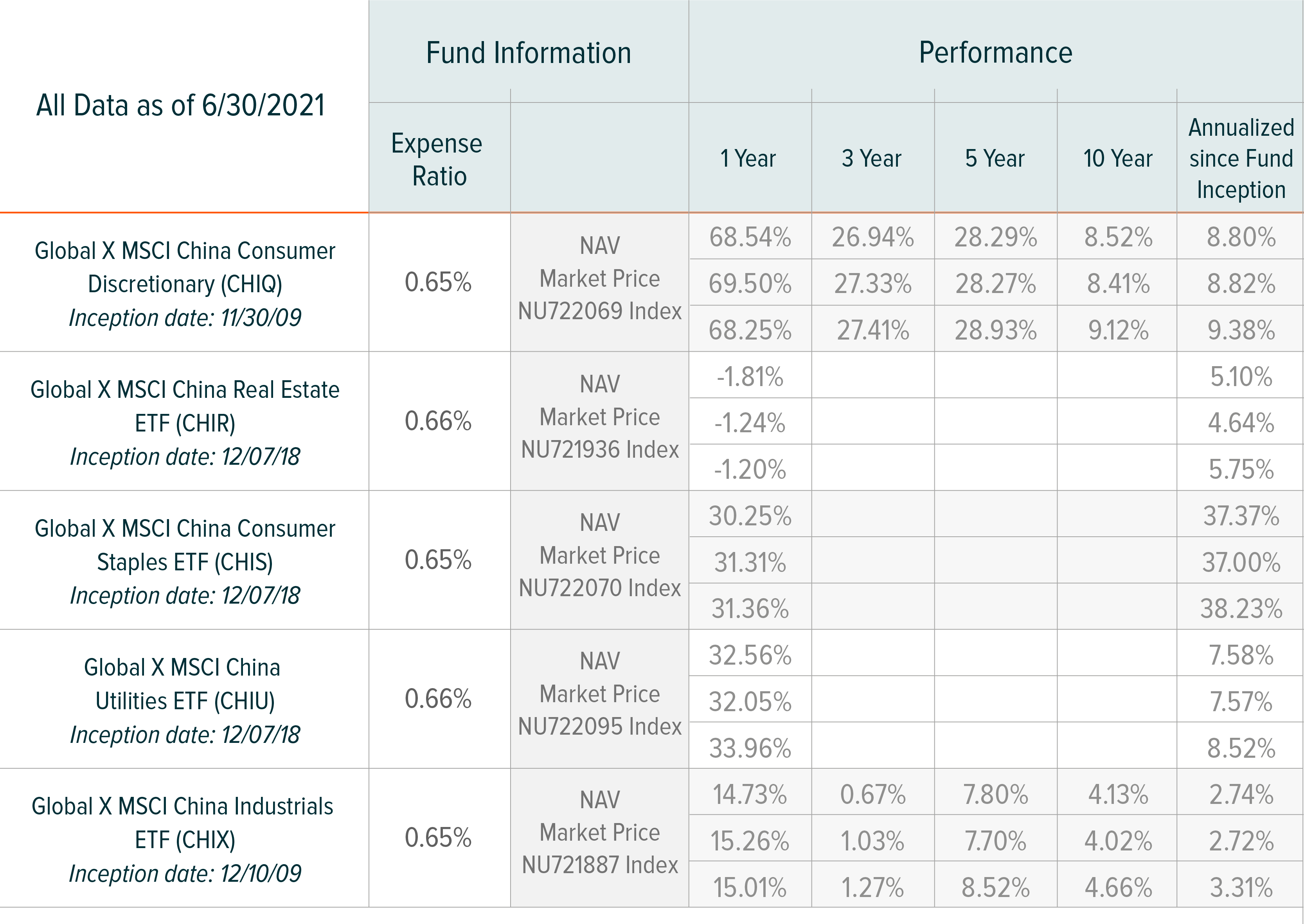 Dispersion between China Sectors Widen, While US Sectors Narrow

Sector dispersion is the difference between the best and worst performing sectors in each country. Chinese sector dispersion in Q2 was 29.55%, versus 13.53% in the US. Part of this can be attributed to policy decisions; the Three-Child Policy boosted Health Care stocks while the Three-Red Lines Policy threw a bucket of cold water on Real Estate (both of which are discussed in greater detail later in this piece).

How China Sector Performance Measured Up Against US Counterparts

In the chart below, we show performance of indexes that track China’s 11 GICS sectors, as well as their US sector index counterparts. 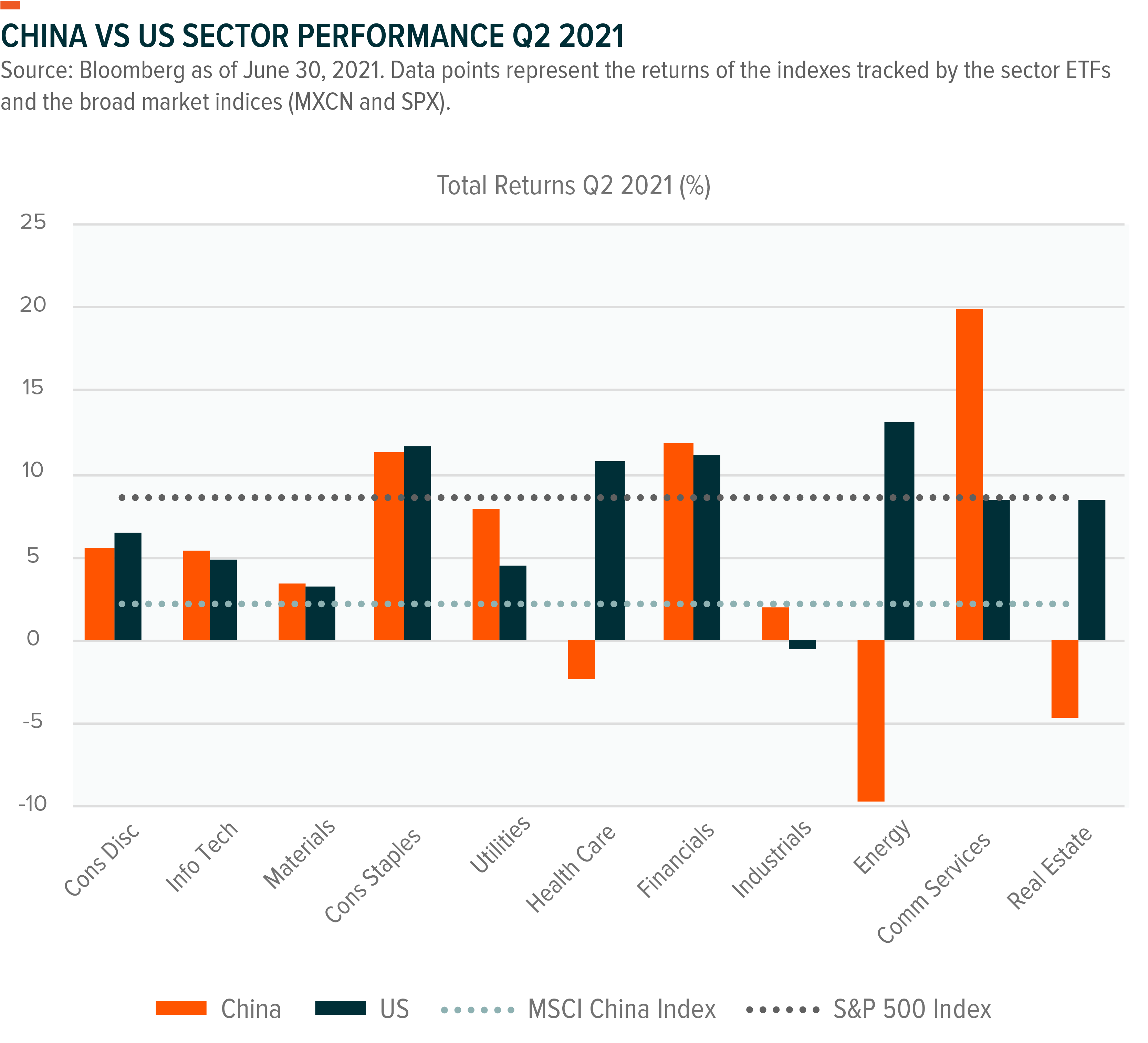 Performance shown is past performance and do not guarantee future results. Index returns are for illustrative purposes only and do not represent actual fund performance.

China’s Health Care sector continued its ascent in Q2, posting gains of 19.66%. Both Health Care and Biotech have been riding tailwinds from COVID, which spurred a race to find innovative solutions to a once-in-a-century crisis. The long-term trends for Health Care look favorable as an aging population structurally increases demand for pharmaceuticals, medical devices, and care. Investors were reminded of that trend when the 2020 Census numbers were released in May, which indicated that China’s looming population decline, due to its top-heavy population by age, is coming earlier than expected.3 While attempting to smooth out the demographic challenges faced in the country, Beijing’s announcement of the Three-Child Policy reinforces the country’s concerns around aging.

Information Technology bounced back from negative returns of -10.76% in Q1 to positive returns of 10.99% in Q2. Jittery market sentiments prevailed in Q1 as tech giants became the target of a regulatory crackdown. In Q2, markets had time to digest and act upon the plans outlined in the 14th Five-Year Plan (FYP), which included plans to pour money into key industries like semiconductors.

Meanwhile, Energy kept up its momentum from Q1, with returns of 11.75% in Q2. Coal companies saw their prices rally over the past few months, possibly because of a trade dispute between Australia and China that resulted in an informal ban on Australian coal. The lack of Australian coal has opened up an opportunity for domestic and non-Australian foreign companies to step in and fill the void. The shortage of coal has even prompted China to release coal from its strategic reserves.

The Real Estate sector saw negative returns of -9.70%. Fearing a build-up of debt and unsustainable growth, Chinese regulators cooled down the real estate market by introducing the Three Red Lines policy towards the end of 2020. In order to be compliant, real estate companies will have to ensure they maintain a liability to asset ratio below 70%, a net gearing ratio of less than 100% and a cash to short-term debt ratio above 1x by 2023.4 The effects of this policy will continue to manifest over the next few quarters as companies move towards a state of compliance. Property developer Evergrande’s financial plight in Q2 has become a cautionary tale against the dangers of excessive leverage in the Real Estate sector.

Please click the fund names above for current fund holdings and important performance information. Holdings are subject to change.