How are investments in China doing this year?

China and the broader emerging markets have been among the brightest equity segments so far in 2017. The MSCI China Index has risen a staggering 49.09% this year through the end of October, while the MSCI Emerging Markets has risen an impressive 32.60%.1 Despite strong performance among both China and the broader emerging market asset class, investors have demonstrated a strong preference for the latter of the two.

According to Bloomberg, Emerging Market-focused ETFs have brought in nearly $35 billion in net assets this year, representing 33% of the total assets in the space at the end of 2016. China-focused ETFs, on the other hand, have in the aggregate brought in less than $1 billion in net new assets this year, which is equivalent to 12% of 2016’s year-end total assets under management (AUM) for the segment.2

There could be numerous reasons for investors favoring the broader emerging markets asset class over allocating to China individually. One potential explanation is that investors are confused by the disconnect between China’s recent performance and the news stories on China’s economy. While performance has been very strong this year, reports from China continue to focus on a potential Real Estate bubble, the Financial industry’s shadow banking practices, and overcapacity in the Industrials sector. With a largely negative news narrative, investors may feel more comfortable with a more diversified exposure to a variety of emerging market countries rather than making an explicit ‘bet’ on China.

Yet even if an investor turns to an emerging market index fund to avoid dealing with China specifically, the country is still likely to dominate their returns. The MSCI Emerging Market Index’s top country exposure is a 26% weighting to China, with nearly 40% of that exposure in the country’s ‘old economy’ sectors.3 As China’s onshore A-share market gets added to the MSCI Emerging Market Index, China’s weight could eventually increase to approximately 43% of the index.4

Rather than investing in a broad emerging market index fund that dictates one’s weighting to China and the sector exposures within that allocation, we believe investors should more actively fine-tune their exposure to the country. To start, we’d suggest focusing on the sectors where the long term trends corroborate the recent performance.

Zeroing in on Chinese Consumption

To us, the clearest trend in China is the rising spending power of the country’s middle class. As incomes in China rise, its massive population is expected to increasingly rise to middle class ranks, driving more discretionary purchases of gifts, travel, electronics, and other products and services that historically were exclusive to more niche pockets of the population.

One way to view a country’s growing consumption power that captures rising incomes, growing use of credit, and an increased propensity to spend, is to look towards periods of heavy spending; one example of this is ‘the holidays.’ And, when we look at the data, China’s holidays are smashing their own record-setting levels of consumption. Having already emerged as the world’s biggest day for e-commerce sales, China’s ‘Singles Day’ posted $17.8 billion in total sales last year, beating 2015’s figures by 32% and topping the US’s Black Friday and Cyber Monday by nearly 6 times.5 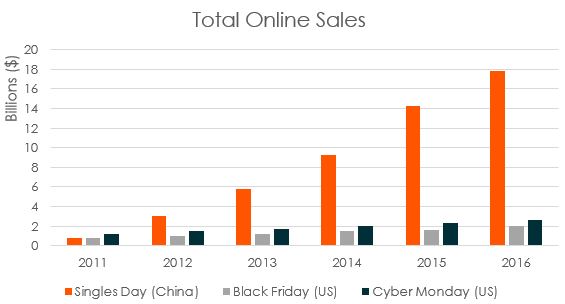 This October, the China National Tourism Administration reported that 705 million trips were made during the National Day Golden Week, nearly a 10% increase over 2016’s record totals, generating domestic tourism revenue of approximately $88 billion.6 But those are not even world record-setting numbers for travel- that belongs to the China’s other travel-heavy holiday, its Spring Festival, which featured 2.9 billion trips by car, train, plane, and boat in early 2017.7 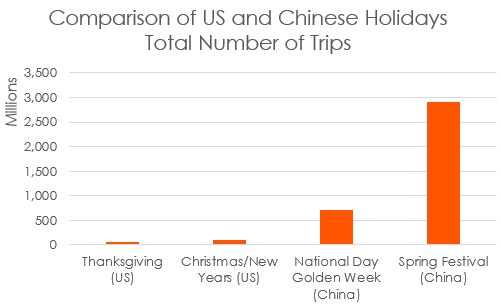 China’s holiday spending and travel demonstrates a level of discretionary consumerism that dwarfs that of the United States. Moreover, recent trends in income growth show that this likely isn’t slowing down. Chinese personal income rose 6.3% in 2016, nearly double the pace in the US which increased 3.2%.8,9 Taking into account that China has approximately 4.3x more people than the US, it becomes clearer why rising consumption isn’t just important to Chinese economic growth, but likely even global growth.

Another important consideration is that consumption does not have a linear relationship with income: global spending data shows the more income you have, a disproportionately greater amount of it is spent on consumption, such as visiting one’s family, buying gifts, or going out to restaurants. We demonstrated this non-linear relationship in our piece ‘Searching for Growth in Emerging Markets’ which showed Chinese Consumption levels at the bottom of a U-shaped curve that rises as countries reach higher levels of wealth. This analysis helps to explains why retail sales growth in China grew at a faster pace than income (10.4% vs. 6.3%) in 2016.10

China’s growing middle class, an increasing propensity to spend, and the sheer size of the Chinese population, lead us to believe that the negative bent of the news surrounding China is overlooking a powerful emerging growth story. Given that broader-based emerging market indices maintain significant weights to China, and specifically its ‘old economy’ sectors, we believe investors should consider proactively manage their exposure to China to tilt towards higher growth potential segments of the country.

CHIQ: The Global X China Consumer ETF invests in a basket of stocks that operate within the consumer discretionary and consumer staples sectors in China.

4. MSCI, “Adding A Shares Into Emerging Markets – Are You Ready,” Jun 2017. A-Shares are expected to first be introduced to the MSCI Emerging Markets Index in May 2018 initially with a 2.5% inclusion factor (only 2.5% of the total free float market cap of the China A-Shares market). Over time, this inclusion factor is expected to eventually reach 100%, meaning there would be no limits on the weight of China A-Shares in the index.

Index returns are for illustrative purposes only and do not represent actual fund performance. Past performance is not a guarantee of future results. Indices are unmanaged and do not include the effect of fees, expenses or sales charges. One cannot invest directly in an index. High short term performance may not be repeatable.

Investing involves risk, including possible loss of principal. International investments involve risk of capital loss from unfavorable fluctuation in currency values, from differences in generally accepted accounting principles, or from economic or political instability in other nations. Emerging markets involve heightened risks related to the same factors as well as increased volatility and lower trading volume. Securities focusing on a single country and narrowly focused investments may be subject to higher volatility. CHIQ is non-diversified.

Carefully consider the fund’s investment objectives, risks, and charges and expenses. This and other information can be found in the fund’s or summary prospectuses, which may be obtained by calling 1-888-GX-FUND-1 (1.888.493.8631) or by visiting www.globalxetfs.com. Please read the prospectus carefully before investing.