Genomic surveillance is a key piece of defending against SARS-CoV-2 and its variants, including those detected in the UK, South Africa, Brazil, and India. The Pan American Health Organization established the COVID-19 Genomic Surveillance Regional Network for routine virus genomic sequencing. Currently, 22 countries worldwide participate.1 Researchers can use genomic sequencing and related sciences to gain a better understanding of transmission by tracking mutations over time to determine variants’ lineages. Information on mutation is also useful for determining whether a virus has evolved in ways that could impact interventions like vaccines and other therapeutics. Additionally, genomic information taken from humans could help determine who might be susceptible to increased infection and health risks, and which interventions are suitable for different individuals.

Clean Energy for America Act Puts a Charge in EVs

The Senate Finance Committee advanced the Clean Energy for America Act, which now moves to the Senate for ratification. The bill’s language around tax credits for electric vehicles (EVs) is particularly noteworthy. Under current law, consumers receive up to a $7,500 federal tax credit for buying eligible EVs – however, this credit is limited to the first 200,000 EVs sold by each car company. Tesla and GM have already exceeded these sales limits, meaning their customers no longer receive this credit. The Clean Energy for America Act would extend the $7,500 credit for as long as EVs represent less than 50% of total car sales in the U.S. Thereafter, the tax credit is phased out over three years. The bill also includes a $2,500 tax credit for new qualified plug-in electric drive motor vehicles for which the final assembly is at a facility in the U.S. before 2026. Another $2,500 is available if that vehicle is assembled at a facility whose production workers are members of a represented labor organization. In total, EVs would be eligible for a maximum tax credit of $12,500. Should the bill pass, the sticker price for certain EVs could become significantly cheaper than similar internal combustion engine vehicles.

The Department of Homeland Security (DHS) is taking steps to mitigate the effects of the ransomware cyberattack on the Colonial Pipeline and to prevent future attacks on the country’s energy infrastructure. The attack on Colonial resulted in an 11-day shutdown for the company and widespread gasoline shortages along the East Coast.2 The Transportation Security Administration (TSA), which oversees pipeline security, will work with the Cybersecurity and Infrastructure Security Agency (CISA) to increase surveillance of the nation’s pipelines. Cybersecurity staffing deficits will be addressed and previously voluntary cyberattack reports for pipeline companies will become mandatory. New rules may also require companies to appoint cyber officials who have around-the-clock contact with federal authorities.3 The upward trajectory in the number of cyber threat events like Colonial’s is expected to continue to boost global cybersecurity spending and refocus governments’ attention on cyber defense for critical industries.

Semiconductors are critical components for connected devices, from cars, to TVs, and appliances. With a global chip shortage paralyzing certain industries from participating in the re-opening economic recovery, governments are getting uneasy. In some instances, they are investing billions of dollars into domestic manufacturing supply chains. South Korea recently committed a massive $452 billion to its chip industry by 2030.4 With the help of industry giant Samsung Electronics, the government’s “K-Semiconductor Strategy” offers the semiconductor industry tax breaks, financing, and infrastructure. Prior to South Korea’s announcement, the U.S. government proposed a $50 billion plan to accelerate on-shore chipmaking and research, and China pledged approximately $150 billion to its own semiconductor industry.5,6 The European Union said that it wants 20% of the world’s semiconductors to be manufactured in Europe by 2030 and directed $160 billion for tech investment, including semiconductors.7 In the 21st century a secure and domestic semiconductor supply chain is becoming akin to energy independence strategies of previous decades.

PayPal reported that 1 million merchants now use the QR code payments feature that it launched in May 2020.8 In Q1 2021, PayPal processed $6.4 billion from QR codes and card payments in-store.9 PayPal also reported that the Buy Now, Pay Later (BNPL) feature it launched last September processed $1 billion in Q1, up 36% quarter-over-quarter (QoQ).10 As of Q1, 330,000 merchants accepted BNPL, up 33% QoQ.11 PayPal counted 3.3 million BNPL unique active users, a 19% QoQ increase.12 Notably, BNPL has a high repeat rate: 50% of BNPL users use it again within three months and 70% use it again within six months.13 With early adoption numbers like these, QR code and BNPL growth rates could eventually prove to be some of the fastest growing segments within the FinTech ecosystem.

Platforms Hop on the Monetization Train

Social media platforms are increasingly blending elements of e-commerce, streaming, gaming, and fintech, all of which increase user engagement and monetization opportunities. But key to platforms’ success, particularly in these new features, is properly incentivizing content creators. Snapchat announced that it will permit users to tip high-profile creators with “gifts” via chat, which they can cash out. Twitter released its Tip Jar feature for users to send money to their favorite creators through Bandcamp, Cash App, Patreon, PayPal, or Venmo. Twitter will also offer a “Super Follows” feature that let users pay to see exclusive tweets.14 Facebook recently curated a pay-per-view streaming platform for sports, where 17,000 fans spent $2.99 each for a virtual ticket.15 And Instagram introduced a marketplace to link brands with targeted users and Creator Shops, which act as virtual stores for creators to sell their products.16 Such monetization initiatives incentivize engaging content and diversify social media revenues away from advertising. 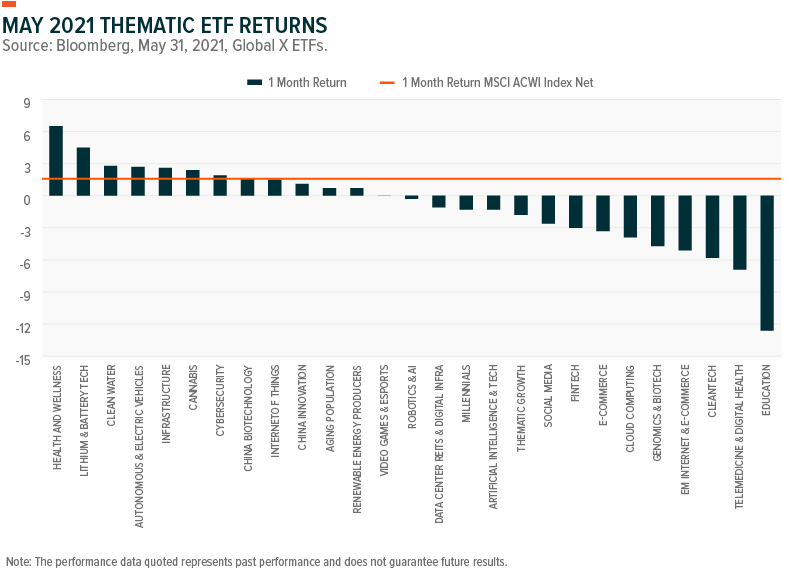 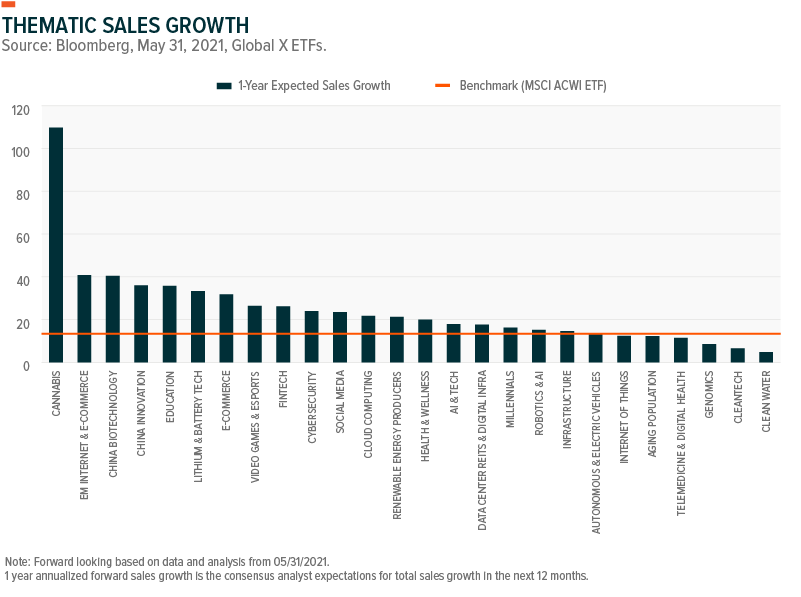 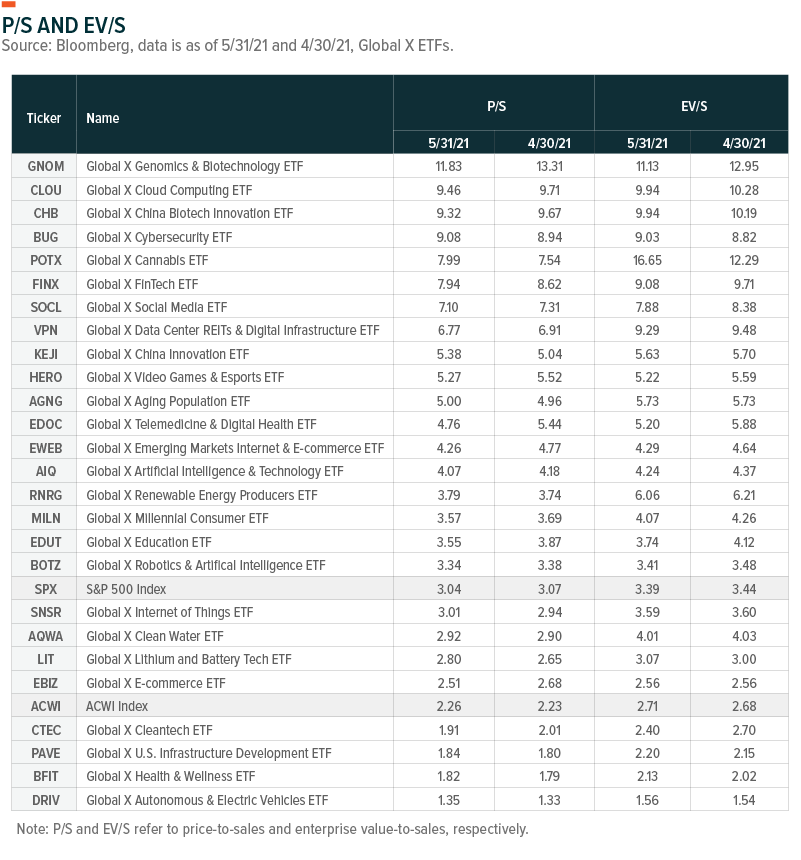 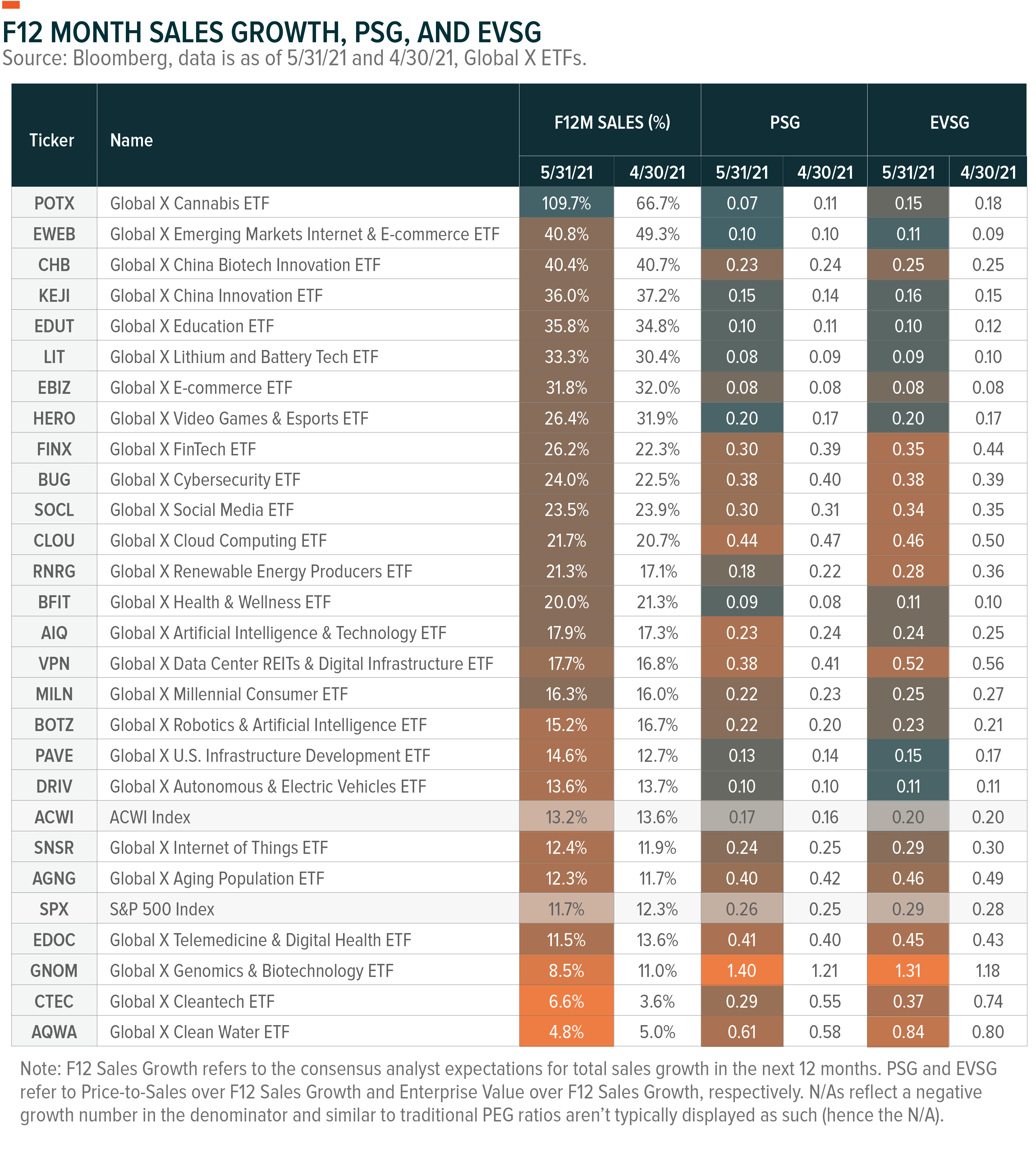 1. PAHO, “Virus variants are expected, but surveillance should continue to monitor possible changes in clinical patterns, experts say”, May 14, 2021.

4. CNBC, “Governments are deploying ‘wartime-like’ efforts to win the global semiconductor race”, May 17, 2021.

Investments in the cannabis industry may be susceptible to loss due to adverse occurrences affecting this industry. The cannabis industry is a very young, fast evolving industry with increased exposure to the risks associated with changes in applicable laws (including increased regulation, other rule changes, and related federal and state enforcement activities), as well as market developments, which may cause businesses to contract or close suddenly and negatively impact the value of securities held by the Fund. Cannabis Companies are subject to various laws and regulations that may differ at the state/local, federal and international level. These laws and regulations may significantly affect a Cannabis Company’s ability to secure financing and traditional banking services, impact the market for cannabis business sales and services, and set limitations on cannabis use, production, transportation, export and storage. The possession, use and importation of marijuana remains illegal under U.S. federal law. Federal law criminalizing the use of marijuana remains enforceable notwithstanding state laws that legalize its use for medicinal and recreational purposes. This conflict creates volatility and risk for all Cannabis Companies, and any stepped-up enforcement of marijuana laws by the federal government could adversely affect the value of investments.