Out of this world CRISPR

For the first time, astronauts used CRISPR/Cas9 technology to edit DNA in space. The purpose of the experiment at the International Space Station is to track how cells repair their DNA in such a demanding environment. The CRISPR-induced DNA lesions intends to induce targeted breaks in the yeast genome to mimic genetic damage caused by cosmic radiation, a serious risk facing space travelers. Figuring out how to repair DNA from radiation damage could be quite useful, particularly for deep space travel, as astronauts are subject to about 30 times the radiation a human receives on earth. This Genes in Space study is another example of the substantial growth rate of genomics experimentation, data, and technology, which is estimated to be growing at a faster pace than the Moore’s Law, i.e., the rule in the electronics world that says that the number of transistors on a microchip doubles every two years.1

Countries: The older they are, the more robotic they get

A study from renowned economics professors Darren Acemoglu and Pascual Restrepo links age to robotics adoption.2 The study concludes that aging workforces contribute to higher automation, particularly in industries that rely heavily on manual labor. Robot density, i.e., robots per 10,000 workers, is highest in countries aging the fastest. South Korea leads with 710, while Singapore (658), Germany (322) and Japan (308) follow. The US is at 200, as immigration slows its aging rate. China is at only 97.3 But look for China to increase its adoption rate as its own population ages and labor costs increase.

Tesla to launch robotaxi to compete with Uber and Lyft

After several teases, Tesla announced plans to launch robotaxi capabilities using its new Tesla Network. The roughly 500,000 Tesla models on the road now, plus the estimated another 350,000 to be delivered this year, could be eligible to be used as a robotaxi when not being utilized by their owners. The company plans to roll out the technology with what it claims to be the best chip on the road for autonomous driving. The technology is not fully developed for level 5 autonomy yet; however, Tesla could conceivably update the software over the air. Today, about 90% of a Tesla vehicle’s issues can be addressed remotely through a similar process. Complete regulatory approval will take time, but CEO Elon Musk says he is “very confident predicting that there will be autonomous robotaxis” by the end of 2020.

Digging for strategic minerals: Could lithium be the next chapter in trade war?

Lithium-watchers became alert when President Xi Jinping visited a rare-earth mining base in China. Lithium is not one of the 17 rare earth materials, but China could easily target it as a strategic mineral given its importance in personal electronics, renewable energy, and of course electric vehicles. China has leverage, as it produces 51% of the global lithium supply, versus the US’s meager 1%.4 Disruptions could add upward pricing pressure that benefit miners, particularly those with capabilities in lithium-rich South America’s Lithium Triangle.

Key metals like lithium have Congress’ attention. In May, lawmakers introduced the bipartisan American Mineral Security Act, which aims to reduce U.S. dependence on foreign minerals, secure existing resources, and protect supply chains for the country’s 21st century auto and energy industries. Lithium, along with cobalt, nickel and manganese, are key elements for electric vehicle (EV) batteries, as well as many other applications.

Burrito-maker Chipotle seems to have shaken off the brand damage from several food poisoning incidents in recent years. As part of its recent health-conscious evolution, the company has emphasized its digital transformation via online sales and its customer loyalty rewards program. Digital accounted for nearly 13% of sales in Q4’18, up 66% YoY. In April, Chipotle announced a partnership with Venmo, through which it deposits surprise amounts ranging from $1 to $500 in customers’ accounts. All told, 25,000 people a day receive some type of surprise. Such brand campaigns are generally nonmaterial, but it’s a perfect anecdote for how e-commerce, online payments and Millennial targeted growth strategies come to life in the real world.5

Your zip code matters more than your genetic code

Popular belief is that good genes cause long lifespans. But that seems to be rooted in myth. Lifespan heritability is how much of a variation can be explained by genetic differences versus non-genetic differences. And estimates remain consistently low (15–30%).6 The implication is that if genes determine less than 30% of the ageing process, then environment, stress, diet, physical activity, sleep and relationships could account for the remaining 70%.

That’s good news for the estimated $3.1 trillion wellness economy, which continues to expand faster than global economic growth.7 Industries like Anti-Aging, Fitness & Mind-Body, Healthy Eating and Nutrition & Weight Loss are no longer siloed. They will increasingly converge as we integrate wellness into our homes and communities, our work, and our travel.

Fintechs flex their M&A muscles looking for benefits of scale

Two mammoth deals changed the fintech landscape in Q1. Fiserv acquired First Data Corp and Fidelity National Information Services’ bought Worldpay. The deals, which are worth roughly $65 billion combined, create two of the world’s largest providers of payments solutions and financial technology services. The mergers offer the acquirers enhanced payments capabilities with highly complementary products and distribution channels, as well as troves of data. Managements of the newly combined companies emphasize the benefits of scale in a rapidly changing industry. Both expect to reap revenue and cost synergies. Other consolidation drivers include the rapid growth of e-commerce and rise of digital payments in Europe and emerging markets.8 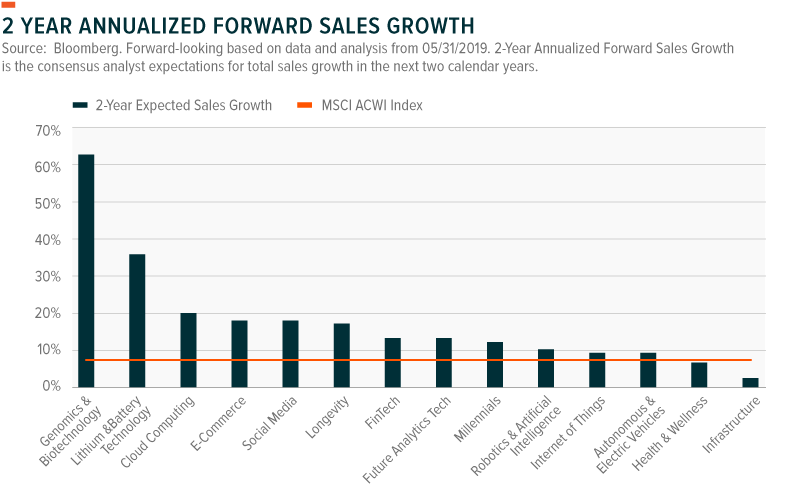 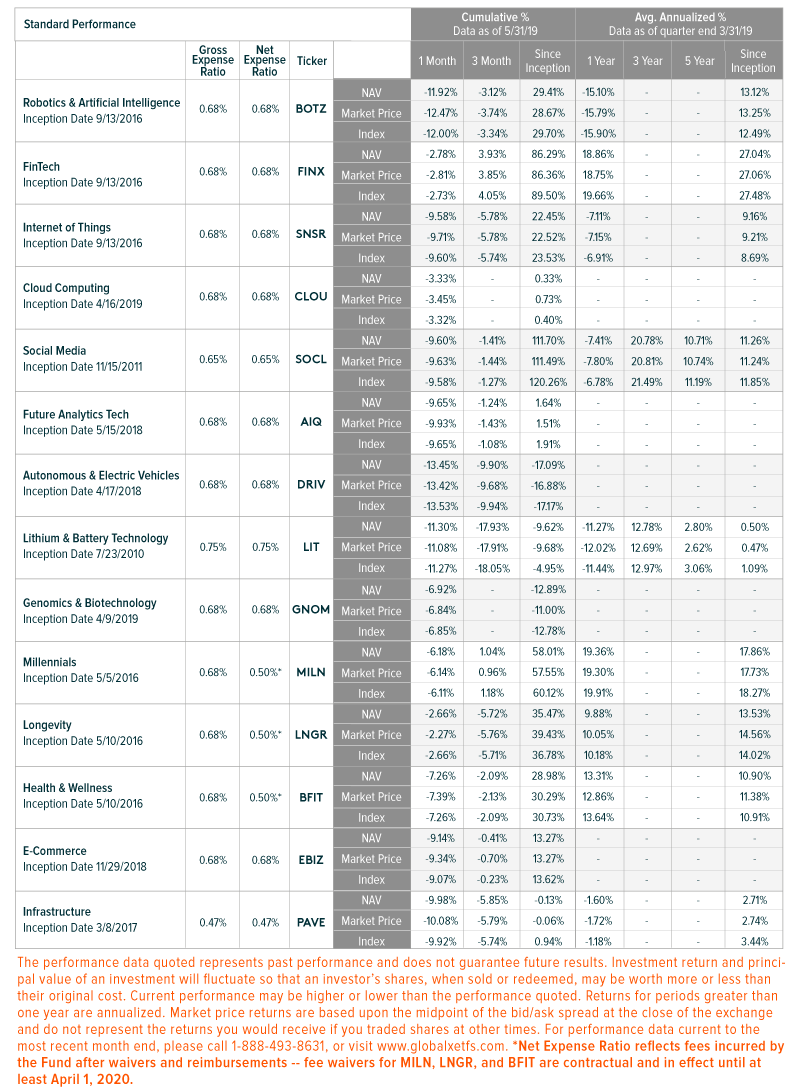 To learn more about the disruptive themes changing our world, read the latest research from Global X:

6. Calico, “Estimates of the Heritability of Human Longevity Are Substantially Inflated due to Assortative Mating,” Nov 1, 2018

7. Global Wellness Insitute, “Global Wellness Economy Monitor,” 2018 – Note: Personal Care & Beauty estimates were excluded from the total as we do not categorize these segments as Wellness