Nuclear power has become an essential source of electricity to meet the world’s growing energy demands, as it can generate power at an enormous scale, is cheaper than many other alternative fuel sources, and emits minimal greenhouse gasses. As countries seek to meet rapidly growing electricity demand while limiting pollution, the World Nuclear Association (WNA) expects global nuclear generation capacity to grow over 40% from the current 389 gigawatts (GWe) to 552 GWe by 2035.1,2

Uranium is the fuel that enables nuclear plants to generate electricity. Demand for the commodity is largely driven by global nuclear power output. Despite anticipated growth in nuclear power, and in turn, rising demand for uranium, gaining exposure to this commodity can be difficult. Uranium trades with thin liquidity on futures exchanges and there are ownership restrictions, given its usage in weapons.

What is uranium and how is it extracted?

Uranium is a heavy, dense, and radioactive metal, making it a potent source of concentrated energy. Uranium is found in most rocks in concentrations of 2 to 4 parts per million and is as common in the Earth’s crust as other metals such as tin and tungsten.3 Uranium is generally recovered from the ground using open pit mining, underground mining, or in-situ leach (ISL) methods.4

Open-pit or underground mining methods collect rocks that contain very low concentrations of uranium. In a milling process, the rocks are crushed and ground into fine fragments, while water is added to create a slurry – a semi-liquid mixture. Sulphuric acid or an alkaline solution is mixed with the slurry, allowing 95-98% of the uranium to be recovered. Uranium oxide, also known as yellowcake, is precipitated from this solution. Yellowcake must undergo yet another enrichment process to make it viable as nuclear fuel.4

In-situ leach (ISL) mining is the preferred method for extracting uranium, as this approach is more cost-effective and environmentally friendly than open pit or underground mining.4 ISL involves pumping a solution called a lixiviant into the ground to dissolve uranium from the rest of the rock formation. The uranium extract is then recovered from the ore, whereby it is purified, concentrated, and dried to produce yellowcake.5

The table below highlights the major differences between the recovery methods discussed above.4

Unlike many other commodities, uranium is not highly concentrated in a handful of geographic areas. Instead, it is found in many places around the world, as depicted in the chart below.

How is uranium used to generate electricity and what are uranium’s advantages?

Nuclear power is one of the few sources of electricity that combines large scale power output and low greenhouse gas emissions, with costs that are comparable to traditional fossil fuel power stations.

Similar to coal or natural gas power plants, nuclear reactors generate electricity by producing immense heat. This heat induces steam, which propels a turbine connected to an electric motor. As the turbine rotates, the electric motor produces electricity.  In nuclear power stations, however, the heat is not generated by burning fossil fuels, but rather by splitting uranium-235 atoms in the process of nuclear fission.3 (WNA)

The energy released through nuclear fission is thousands of times greater than the energy released through the process of burning similar amounts of fossil fuels. This makes nuclear power a very efficient method of generating utility-scale power. In addition, it means the ongoing fuel costs for nuclear power plants tend to be quite low, given the minimal amount of material needed to power the plant.

The amount of heat or energy generated from 1 Kg of different fuel types can be found in the table below.

In addition to the power density of uranium, nuclear is also among the cleanest methods of producing electricity, in terms of greenhouse gas emissions. 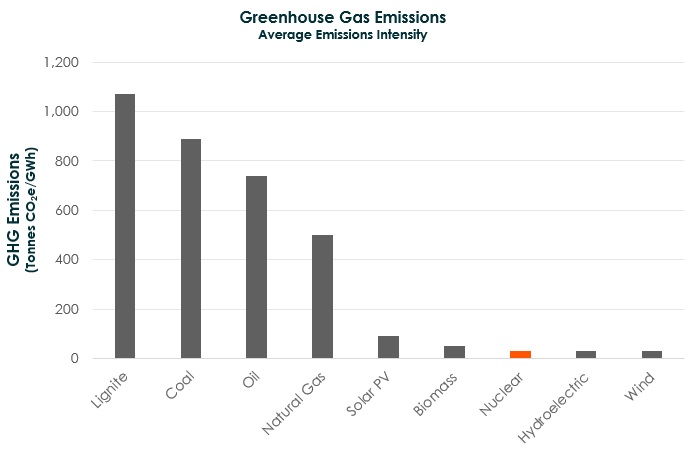 In terms of levelized10 costs, nuclear power is cheaper than coal and is significantly cheaper than solar thermal, biomass and offshore wind farming. 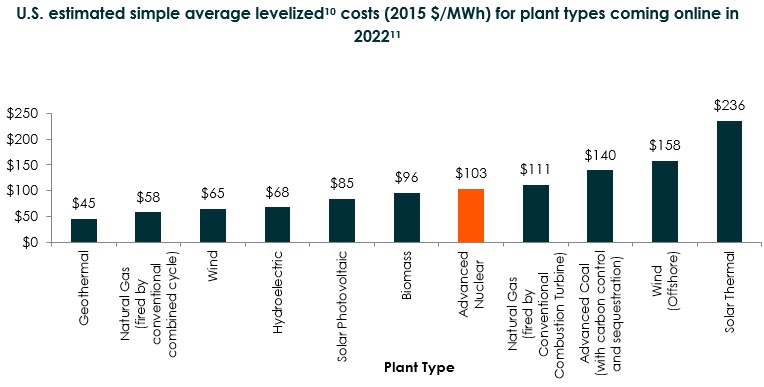 What is the outlook for uranium demand?

In 2013, nuclear power contributed around 5% of the world’s total energy supply, and is a major source of energy in developed markets like Europe (26%) and the US (20%).12,13,14 According to analysts, nuclear power output is expected to grow faster over the next five years than over the last 20 years.1 This demand is largely being driven by emerging markets which have massive electricity needs, but are struggling with air pollution issues, like China and India.

China is not only the largest market for uranium in the world, but also it has the most ambitious plans to grow its nuclear power capacity. The country currently has 34 active reactors, with another 20 under construction, and 42 more planned.2 According to Beijing’s most recent five-year plan, China is seeking to build 40 new nuclear power plants by 2020, tripling its nuclear power generation.15 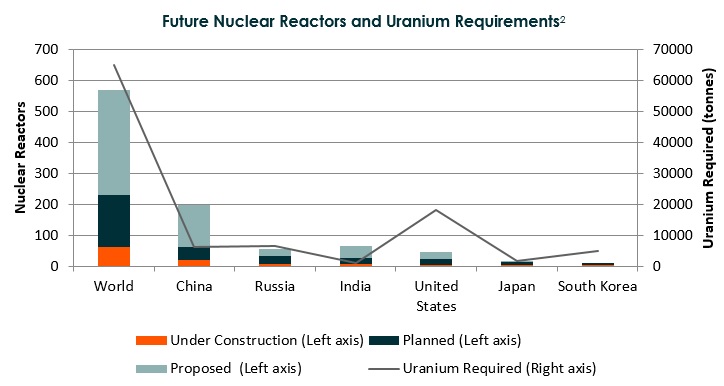 UxC forecasts global nuclear power capacity to increase by 44%, from 377 gigawatts in 2015 to 541 gigawatts in 2030. Of the net growth in nuclear generation capacity, China accounts for 64%, while India, Korea and Russia collectively make up an additional 24%. UXC’s Q4 2015 outlook also estimates 48% growth in uranium demand, rising to 267 million pounds U3O8 by 2030 from an estimated 179 million pounds in 2015.18 The expectations for rapid growth in nuclear power output has J.P. Morgan expecting uranium prices to double by 2020.19

What is the status of uranium supply?

Uranium supply consists of new production from mining activity and existing inventories, which is largely from decommissioned nuclear weapons stockpiles. Since 1980, weapons-grade uranium in the US and the Soviet Union has been blended down to be repurposed as reactor fuel as part of nuclear disarmament agreements. This steady flow of supply kept uranium prices, as well as mining production, artificially low.

Supply from mining production meets approximately 84% of the current uranium demand and the rest is met with supplies from decommissioned weapons.6 These supplies, however, are being depleted and, according to UxC, will drop from 44 million pounds U3O8 per year in 2015 to 31 million pounds U3O8 per year in 2025.20 Though this supply stream will continue to play a meaningful role in the near and medium term, its impact will dwindle over the long term, necessitating greater need for investment in new mining production to meet anticipated future demand.21

How can you invest in uranium?

Gaining exposure to uranium can be more nuanced than other more commonly traded commodities, like oil and gold. One method is to buy uranium mining stocks or exchange traded funds (ETFs) that own a basket of those mining stocks. Another is to gain access to uranium futures, which trade with relatively light liquidity. Individual mining stocks can have high idiosyncratic risks, which may be mitigated by owning a broad set of uranium mining stocks from around the world. They can also be somewhat of a levered play on the underlying commodity price, given the high fixed costs associated with mining. While uranium futures offer exposure to the spot price of uranium, they can be subject to negative returns associated with contango- when the spot price of the commodity trades below its future price.

We believe investing in uranium through the Global X Uranium ETF (URA) may provide an efficient and cost-effective method for accessing a broad basket of companies involved in uranium mining around the world.

10. According to US Energy Information Administration (EIA), the levelized cost of electricity (LCOE) is a measure of overall competiveness of plant types. It represents the per-KWh cost in real dollars of building and operating a generating plant over an assumed financial life and duty cycle.11

Investing involves risk, including the possible loss of principal. International investments may involve risk of capital loss from unfavorable fluctuation in currency values, from differences in generally accepted accounting principles, or from economic or political instability in other nations. Emerging markets involve heightened risks related to the same factors as well as increased volatility and lower trading volume. Narrowly focused investments may be subject to higher volatility. There are additional risks associated with investing in Uranium and the Uranium mining industry.