Why FinTech is Thriving in Emerging Markets

Historically, individuals and small businesses in emerging markets suffered from a lack of access to basic financial services, with banks only extending their offerings to the country’s wealthiest. This left many to rely heavily on cash-based transactions, which can be susceptible to fraud and theft, while access to loans was sparse. Yet with new technologies that leverage software and mobile connectivity, digital services are being extended efficiently and inexpensively to hundreds of millions of people in the developing world. The widespread adoption of these services is likely to accelerate growth in the developing world as it fuels consumerism, technological leap-frogging, and more effective government policies.

Emerging markets make up nearly 86% of the world’s population yet produce only 40% of global economic output.1 However, EMs increased their share by nearly 10% over the last decade as their faster growth economies shifted from export-driven strategies towards more consumer-oriented growth.2 Total global consumption is expected to reach $62 trillion by 2025, double 2013 levels, with half of this growth derived from EMs.3 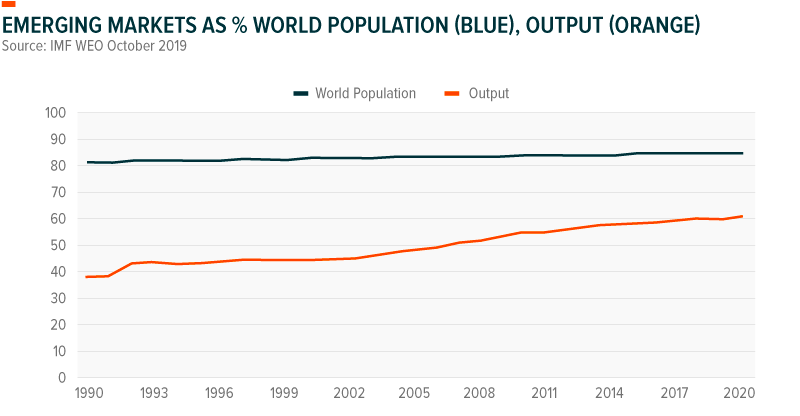 Such growth benefits EM consumers, who are becoming wealthier and entering the middle class by the hundreds of millions. And with more wealth comes more need for financial services. Older generations may want savings accounts and insurance products, while younger generations prioritize linking a bank account to their phones for easy online and mobile payments. 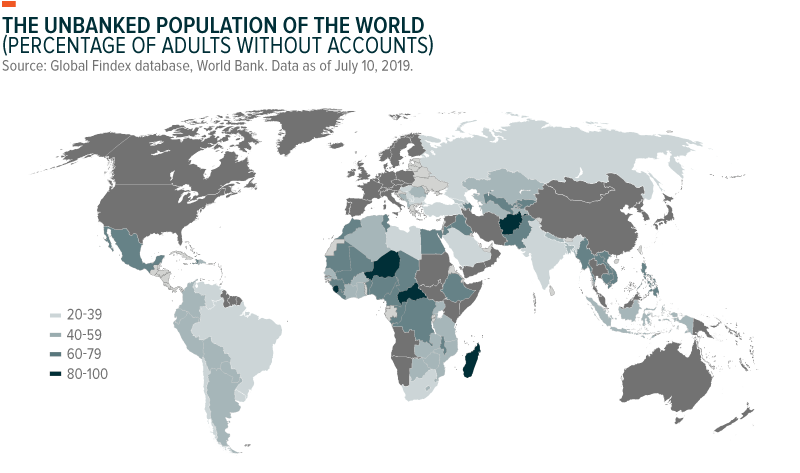 FinTechs are especially powerful in EMs because they are able to capture an unmet demand, filling gaps in the financial system left by traditional institutions for banking services and financial products. In 2017, roughly 2 billion adults lacked access to financial services globally. Demand growth for such products has soared in EMs like China, which grew from 1% of global life insurance premiums in 2010 to 10% in 2017.4 And while the percent of unbanked or uninsured varies from country to country, Ernst & Young estimates that banking these individuals in EMs alone could generate $200 billion in revenue.5

With FinTech, financial inclusion becomes a much more attainable goal because it becomes much cheaper to reach smaller or underserved segments of the population that might have previously been considered “unattractive” customers. FinTech platforms largely have an upfront cost of developing the program and infrastructure to conduct transactions. By relying heavily on technology, however, ongoing and variable costs tend to be quite low, making it possible to realize profit on perhaps a bank account with limited assets or a micro loan.

Internet penetration is lower in EMs than in the developed world, but a large population and substantial willingness to adopt new technologies creates enormous potential. China, for example, has over 3x more internet users, over 3.75x more mobile phone users and spends 7.5x more money through mobile transactions than the US. Over the past decade, mobile phone usage has skyrocketed in China – with smartphone ownership in China growing from 56% in 2011 to 96% in 2018.6 For reference, mobile phone usage in the US is 96% but smartphone usage is 15% lower in the US at only 81%.7

Without existing infrastructure in place, like traditional bank branches and credit cards, EMs can easily adopt the latest technology without forcing an old business model into obsolesence. China has the highest adoption rate of mobile payments globally, leapfrogging credit cards, to spend over $15 trillion in 2017 digitally. This compares to just $2 trillion in the US, as consumers slowly shift away from paying with plastic. For perspective, consumers in China spent just $377 billion five years earlier, demonstrating the rapid rise of this new technology.8 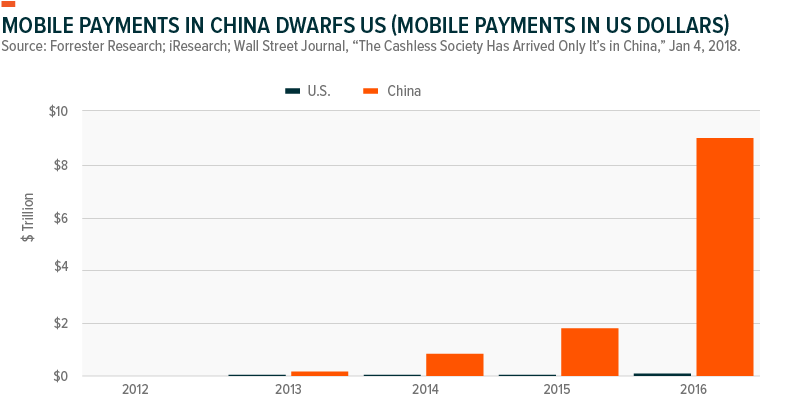 Some of the largest tech companies in the emerging markets are waking up to the opportunity in FinTech and making major investments in the space. Global investment in FinTech increased from $50.8 billion in 2017 to a new record high of $135.7 billion in 2019.9, 10, 11 The Asia Pacific (APAC) region accounted for nearly 20% of the 2,693 FinTech deals completed globally in 2019 as major tech platforms looked to add FinTech services to their ecosystems.12

China’s Tencent, for example, began originally as a social media application, but by 2017 facilitated 40% of China’s mobile payments (as of 2017).13 The platform allows users to make payments, order food delivery, purchase entertainment tickets, and order rides through one of its million-plus “mini-apps.” 14 The firm accomplished this by buying stakes in nearly 300 companies across developed and developing markets over the past six years.15

Another major area of investment is in digital banking, offering online bank accounts, transfers, and loans to occur without depending on a physical branch location. These themes are powerful in EMs, given their large, unbanked populations, inefficient banking systems, and general lack of financial infrastructure.

In Brazil, major banks, including Bradesco, Itaú, and Banco do Brasil, are going digital to provide and expand client services as more transactions are conducted through the internet or mobile phones. In 2019, over 80% of transactions conducted by Banco do Brasil were carried out on mobile phones.16 Many of these services are offered through the WhatsApp messaging platform and range from simple balance checks to complex debt restructuring services. In its 2019 annual results, Banco do Brasil said that its retail customers renegotiated nearly $4 million in debt via WhatsApp.

Some EM governments are incubating domestic FinTech efforts by cultivating their own start-up hubs or clusters. Public-private partnership programs (PPPs) such as Start-Up Chile, Start-Up Brazil, and IncubAR (Argentina) provide equity-free funding, training, mentorship and partnership opportunities for innovators, as well as special visa programs for foreigners. By keeping barriers to entry low, these programs are a relatively easy way governments can encourage innovation.

Other measures remove regulations to foster innovation. For example, the sandbox approach permits new products, technologies, and business models to be tested under easier regulatory conditions, with appropriate supervision requirements and safeguards. These flexible frameworks allow incumbents and challengers to innovate outside of the existing regulatory framework while regulators monitor the impact and learn iteratively.

EM regulatory bodies and central banks using this framework include the Central Bank of Brazil (BCB) and the Central Bank of Malaysia (BNM) in the EMs. The sandbox approach is especially helpful for EMs because it fosters financial inclusion, which is critical to developing EMs’ financial systems.

While blockchain-based cyrptocurrencies are often used by individuals to avoid government regulation or intervention, they can also assist governments in effectively enacting their policies. Government-sponsored blockchain technologies have the potential to help emerging market governments reduce fraud and money laundering in the distribution of social security and transfer of remittances. It could also improve policy transmission by helping central banks exercise greater control over the money supply, build credibility, reinforce structural change domestically and integrate with international markets. As such, many emerging market central banks, including the BCB and the People’s Bank of China (PBOC), are exploring its potential uses cases.

Who Are The Emerging Market FinTech Leaders?

Several prominent EM FinTechs are local firms that graduated from startups to unicorns before becoming multi-billion-dollar tech giants. Often these firms recognize unmet demand or look to disrupt an inefficient or anticompetitive domestic financial services industry. Other major players include FinTech firms from developed markets, whose software or infrastructure can be adapted to local emerging markets. 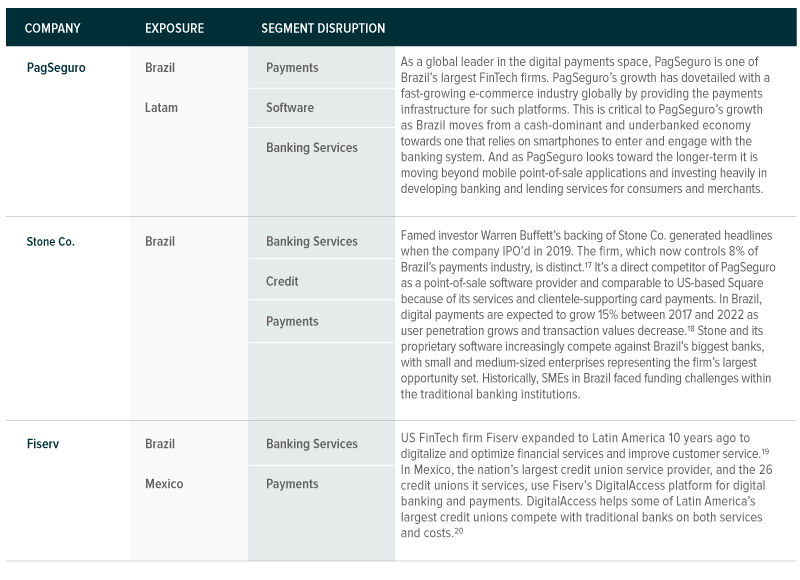 FinTech is a disruptive theme challenging all ways that money changes hands.  For individuals, it can remove frictions and reduce the costs of paying for goods, saving, and investing. For businesses, it can digitalize certain functions, reduce borrowing costs, and enhance risk controls. While FinTech’s potential is global in nature, its potential across the EM landscape is vast as demand for broader access to financial services and greater competition is widely unmet.

FinTech may be an unusual case where EMs lead their developed market peers. Just recently, developed market efforts are catching up, such as the US Treasury Department and the Office of the Comptroller of the Currency’s Fintech Charter, as well as the recently announced exploratory European Central Bank (ECB) blockchain project. Also, the Federal Reserve plans to implement a real-time payments system by 2024. For comparison, though, Brazil and Chile’s central banks already began exploring such digital ledger technology systems prior to 2017.

FINX: The Global X FinTech ETF seeks to invest in companies on the leading edge of the emerging financial technology sector, which encompasses a range of innovations helping to transform established industries like insurance, investing, fundraising, and third-party lending through unique mobile and digital solutions.

CHIX: The Global X MSCI China Financials ETF seeks to invest in large- and mid-capitalization segments of the MSCI China Index that are classified in the Financials Sector as per the Global Industry Classification System (GICS).

Please click the fund name above for holdings information.

19. Fiserv, “The Wait is Over as Brazilian Banks Look to Technology to Improve Customer Experience,” Jun 2019.

Investing involves risk, including the possible loss of principal. International investments may involve risk of capital loss from unfavorable fluctuation in currency values, from differences in generally accepted accounting principles, or from economic or political instability in other nations. Emerging markets involve heightened risks related to the same factors as well as increased volatility and lower trading volume. Securities focusing on a single country and narrowly focused investments may be subject to higher volatility. Companies engaged in Information Technology can be affected by rapid product obsolescence, and intense industry competition. Blockchain technology is a new and relatively untested technology, may never be implemented to a scale that provides identifiable benefits and could be vulnerable to fraud and cybersecurity risk. The Funds are non-diversified.