An Infrastructure Plan for the 21st Century (Part 3): Getting it Built

The following is part 3 in a 3-part blog series that explores the future of infrastructure in the United States. In this section, we theorize on what a 21st century infrastructure plan could look like. In part 1, we discuss the current state of the US’ infrastructure and the importance of improving it. In part 2, we consider what future infrastructure could entail and which industries could benefit from building it.

Infrastructure may be a top of mind issue on the national stage, but in reality, the federal government only owns 5% of the country’s non-defense fixed asset stock, often used as a measure of infrastructure, and contributed to just 6% of infrastructure construction spending in 2018 (see chart below).1 State and local governments and the private sector, on the other hand, own the remaining 95% of those assets (30% and 65%, respectively) and are responsible for 94% of the spending.2,3 States fund infrastructure by issuing municipal debt, general taxation, fees, and by establishing public-private partnerships (P3s) where the private sector takes on some or all of building or maintenance costs in exchange for fees or other revenue. Today’s current economic backdrop is supportive of infrastructure spending – borrowing is cheap, with interest payments’ percent of municipal spending reaching the lowest in recorded history. Yet, infrastructure spending has decreased relative to the size of the US’ economy.4 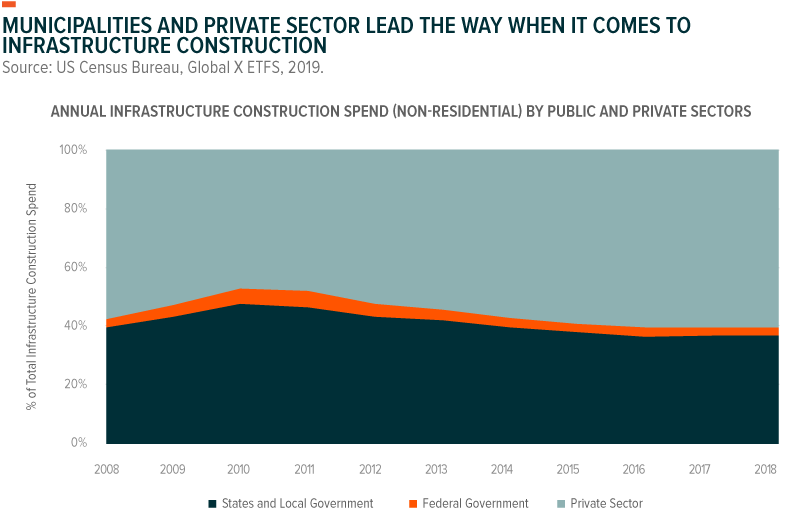 It makes sense that the majority of infrastructure is owned by local or state governments or the private sector. In theory, a decentralized model allows market forces to dictate the building and funding of local infrastructure. This can be especially valuable for a large, geographically diverse country like the US. Federally built infrastructure tends to be one-size-fits-all and politically driven, potentially resulting in sub-optimal decisions or additional layers of regulation. Still, federal funding is necessary for projects of national interest and, in many cases, is needed to complement funding from other sources. A new infrastructure plan should focus on removing the barriers that inhibit spending, fixing where federal programs went wrong in the past, and directing federal funding to best-suited areas.

Infrastructure investment only comes to fruition when capital is available and deployed for its intended use. In the US, infrastructure funds face issues on both fronts. The Federal Highway Trust Fund, for example, will be insolvent after 2021, according to the Congressional Budget Office.5 The trust relies on income from the federal gas tax, which is not indexed to inflation and hasn’t been raised since 1993. While increasing the gas tax would help recapitalize the fund, we believe the federal government should think of novel ways to raise capital that are in-line with how our country uses infrastructure today. In an age where combustion-engine vehicles are on the outs, this could mean installing sensors on vehicles and physical infrastructure that track usage, charging those who use it most, rather than charging at the pump. Such an approach introduces new revenue streams, giving the federal government more ability to fund infrastructure where its needed. However, funds need to be marked for particular use. Funds within the Harbor Maintenance Trust, which is the primary means of federal investment in port infrastructure, frequently flow into unrelated areas for federal budgeting purposes.6 The federal government must prohibit misallocation of funds in cases like this.

Municipalities issue debt to pay for expensive upfront expenditures, while enjoying the flexibility of paying back the debt over time. And most importantly, municipal debt is not taxed at the federal level, meaning that the federal government forgoes revenue, passing savings down to municipalities. However, some studies show that in practice, the amount of foregone revenue can exceed the reduced costs municipalities see from preferential tax treatment, with the remainder going to individual bondholders with high marginal tax rates.7 Other approaches, such as tax-credit bonds, can mitigate this inefficiency by issuing tax credits directly to borrowers.8 The federal government can adjust the level of tax credit provided, allowing for customized subsidies to the public utility depending on its needs. Similarly, direct-pay tax credit bonds pass savings on to the borrower, with the federal government directly paying issuers a percentage of taxable yields offered to bondholders. Both options require that bonds are issued with yields that are competitive with taxable options.

An extensive review and streamlining of regulations could further incentivize infrastructure spending and accelerate the building process. Regulations are important for protecting American citizens, the environment, and the economy, but they accumulate over time, creating redundancies and unnecessary oversight that the government doesn’t have capacity for. Transportation projects, for example, must conform to almost 70 environmental regulations today, compared with 26 in 1970.10 Further, projects that receive any amount of federal funding must be reviewed under the National Environmental Policy Act, a process which today takes 6.6 years versus 2.2 years in the 1970s.11 Repealing these regulations could result in harmful externalities, but thoughtful review and consolidation should ensure that regulations are appropriate for future projects. Additionally, federal funding directed to the government agencies that review prospective infrastructure projects could accelerate the regulatory process and increase capacity for necessary oversight.

Activating the private sector could also bring an influx of capital to infrastructure and result in more efficient spending. In 2016, North American infrastructure funds had an estimated $75B of dry powder, indicating that while there is strong investor demand for infrastructure, there are scarce opportunities to invest in US’ public infrastructure projects.12 Privatizing certain infrastructure by transferring ownership of existing assets to the private sector or contracting private companies for projects could free up some of this capital. Private entities respond to their shareholders and focus on the overall bottom line, spending efficiently and generating returns. The public sector has less flexibility in this regard and can be forced to spend inefficiently. Amtrak, the federal government’s passenger rail service, demonstrates these limitations, losing over a billion dollars a year to an inefficient system.13 Elsewhere in the world, privatized rail services see far greater success. Japan, which is often touted as having the world’s best rail systems, privatized the Japanese National Railways in 1987. Today, Japanese rails are profitable, efficient, and rely on almost no government subsidies.14

Public-private partnerships can yield similar benefit without fully transferring infrastructure ownership to the private sector. By transferring certain responsibilities to the private sector, projects are completed faster and for lower cost.15 Australia’s Road Traffic Authority employed a P3 structure for its 1996 Pacific Highway Upgrade, relying on multiple private sector organizations for design, contracting, and geotechnical services. Working together as a team with public sector oversight, the project closed out seven months early and for $100M less than anticipated.16 Federal governments can direct spending to these types of arrangements. P3 supportive programs like the 2015 Build America Bureau, the Fixing America’s Surface Transportation Act and the Water Infrastructure Finance and Innovation Act, are examples of federally funded programs that either streamline or enable P3 activity.17 Further, federal support for tax-exempt private activity bonds can make it easier for private companies to raise capital for projects that serve the public.18

Rebuilding the US’ infrastructure lays an important foundational pillar for the country’s future economic health – if done thoughtfully. The builders of tomorrow’s infrastructure should ask the question: what does a 21st century America look like? America is urbanized, tech-driven, and faces natural and economic forces never before reckoned with. Infrastructure should be built accordingly, but it also doesn’t build itself.  Policymakers should consider novel and proven means of funding, attracting investment from municipalities and the private sector, while working to streamline the regulatory process to fast-track these critical investments.

Start from the beginning with Part 1 and Part 2, or click here to view the full report (PDF).

PAVE: The Global X U.S. Infrastructure Development ETF (PAVE) seeks to invest in companies that stand to benefit from a potential increase in infrastructure activity in the United States, including those involved in the production of raw materials, heavy equipment, engineering, and construction.

SNSR: The Global X Internet of Things ETF (SNSR) seeks to invest in companies that stand to potentially benefit from the broader adoption of the Internet of Things (IoT), as enabled by technologies such as WiFi, 5G telecommunications infrastructure, and fiber optics. This includes the development and manufacturing of semiconductors and sensors, integrated products and solutions, and applications serving smart grids, smart homes, connected cars, and the industrial internet.

6. US Senate Committee on Environment and Public Works, “Transcript: HARBOR MAINTENANCE TRUST FUND AND THE NEED TO INVEST IN THE NATION’S PORTS,” January 31, 2013.

12. PwC, “What a US infrastructure stimulus could mean for the industrial sector,” March, 2017.

17. PwC, “What a US infrastructure stimulus could mean for the industrial sector,” March, 2017.

Information Technology companies can be affected by rapid product obsolescence, and intense industry competition. Risks include disruption in service caused by hardware or software failure; interruptions or delays in service by third-parties; security breaches involving certain private, sensitive, proprietary and confidential information managed and transmitted; and privacy concerns and laws, evolving Internet regulation and other foreign or domestic regulations that may limit or otherwise affect the operations.

Carefully consider the Fund’s investment objectives, risks, and charges and expenses. This and other information can be found in the Fund’s summary or full prospectuses, which may be obtained by calling 1.888.493.8631, or by visiting globalxetfs.com. Please read the prospectus carefully before investing.