After negotiations concluded in September, the International Monetary Fund (IMF) agreed to increase and accelerate disbursements originally granted to Argentina back in June. The updated deal, which includes a new exchange-rate regime, coincided with the resignation of Luis Caputo from his seat as the Central Bank Chief. While some investors initially interpreted the news as indicative of greater fiscal instability, these developments may provide the backstop and course-correction Argentina needs to lift its long-term prospects.

The IMF’s three-year financial package was revised to frontload the financing and increase resources disbursed before 2020 by $19 billion – boosting the total package to $57.1 billion.1 The revised agreement also frees Argentina to use the funding in a discretionary manner which could reduce the need for external financing and risk of default.

This funding is intended to help Argentina achieve a primary surplus by 2020 and reduce government financing needs and sovereign debt – all in an effort to establish economic stability and reverse this year’s negative GDP growth. 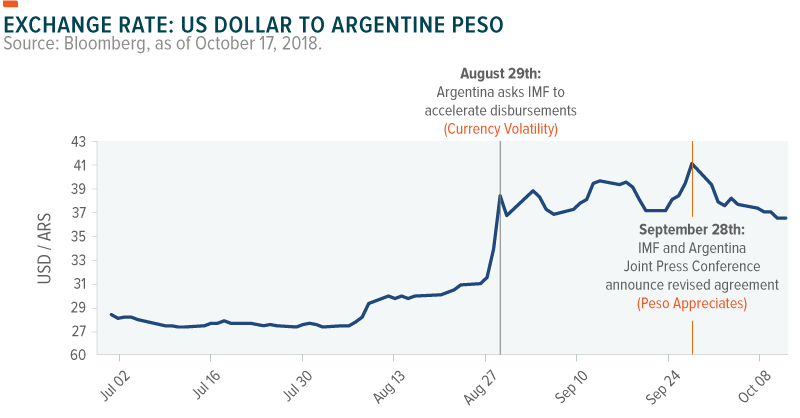 This tactical shift comes at an inflection point, as Macri looks towards the 2019 election cycle with deteriorating approval ratings and attempts to advance a new budget. While likely to be unpopular, the budget would allow Argentina to meet its fiscal targets. After changing leadership at the Central Bank, Christine Lagarde – Managing Director of the IMF –  seemed to have a renewed faith in the administration’s ability, announcing her confidence in the government’s reform plans and in the package, to restore market confidence in Argentina.2

Targeting Money Supply Instead of Inflation: A New Era in Monetary Policy?

As part of the IMF deal, new policies will limit intervention in contrast to Caputo’s reactionary approach. Rather than inflation-targeting, the central bank will now focus on controlling money supply and intervene only should the peso fall outside of a 34 – 44 range to the dollar. The band will be allowed to adjust downwards up to 3% per month with liquidity injections capped at $150 million per day. 4

This could necessitate less conventional policy, which Caputo’s replacement, Finance Minister, Guido Sandleris, seems comfortable with. In a 2011 academic research paper, Sandleris found that indexing sovereign debt to GDP would have lowered the probability of default in Argentina and suggests the government should hold non-contingent assets while simultaneously issuing real-indexed bonds. According to Sandleris, “the magnitude of the welfare effect that this type of [indexing] instrument could generate is equivalent to an increase of approximately half a percentage point per year in certainty equivalent aggregate consumption.” 5

Notably, Sandleris’ appointment was well-received by the IMF, which has in the past supported unconventional policy tactics including wide currency bands and narrow but temporary capital controls to curb currency crises. This approval seemed to buoy investors as the peso rose and Argentine stocks began to recover.

Index provider MSCI announced in June that Argentina would be upgraded from frontier to emerging market status in May 2019 (see MSCI Upgrades Argentina to Emerging Market Status), which boosted investor confidence in Argentine commitments to increase market access and attract foreign investment.

Argentina’s aggressive service sector expansion has for years attracted investors, particularly in Information Technology, which is primed by a growing domestic demand, but driven by a robust international presence. Given Argentina’s leadership regionally as the country with the most tech ‘unicorns’, investments are supported by the industry’s ability to withstand and mitigate often-volatile local market conditions.

Given Information Technology’s relative success, Financials could stand to benefit the most. The sector has struggled recently, given dollar-denominated debts and the peso’s slide increasing debt-servicing fees. However, it is likely to benefit as domestic monetary policy shifts to align with the IMF’s goals of reducing fiscal deficits and establishing macroeconomic stability.

Understandably, investors have been distressed by Argentina’s economic turmoil. However, we see accelerated IMF disbursements and MSCI’s reclassification as affirmative nods to the country’s long-term growth prospects. The possibility of innovative monetary policy could also help restore faith in Argentina’s fiscal track. Work will be necessary to further ease investor anxiety, but for now this deal appears to be a meaningful step.  Looking ahead, eyes will turn towards the 2019 presidential election for indications of Macri’s public support and ability to pass necessary reforms to reduce the country’s deficit.

Investing involves risk, including the possible loss of principal. International investments may involve risk of capital loss from unfavorable fluctuation in currency values, from differences in generally accepted accounting principles, or from economic or political instability in other nations. Emerging markets involve heightened risks related to the same factors as well as increased volatility and lower trading volume. Securities focusing on a single country may be subject to higher volatility. ARGT is non-diversified.