Rising debt, persistent inflation and a protracted recession in Argentina have driven market volatility higher over the last 18 months. In addition to these economic woes, currency weakness and political uncertainty related to the upcoming presidential elections have investors on edge. Yet despite these challenges, Argentina has surprised many as a standout performer against other emerging markets this year. Tensions between politics, macroeconomic factors, and the markets demonstrate that Argentina is at an important inflection point, which may set the tone for years to come.

Cycling Through: Elections and the Economy

This year, Argentine markets seem to be mimicking patterns from the last presidential election cycle in 2015, when after a strong Q1, election-related uncertainty led to a mid-year market downturn. Almost on cue in 2019, a 17.3% rise in Q1 was met with a selloff in April after default risk spiked.1 The jump came after early polling data showed higher approval ratings for the former populist President, Cristina Fernandez de Kirchner (CFK) relative to the current pro-market reformist President, Mauricio Macri.2

While markets were bumpy throughout his first campaign, a strong rally in the initial months following Macri’s October 2015 election led to an all-time high in market capitalization by the end of 2017.3 Argentina’s market performance year to date resembles 2015, although several key differences suggest Argentina could be experiencing the beginning of a rebound from a nadir in expectations.

2018 was headlined by a severe drought, a currency rout, and an economic contraction that combined to pummel markets by nearly one-third. This year, however, is marked by a booming harvest season, strong domestic infrastructure investment, positive earnings growth, and higher global oil prices. This has sent the markets rallying 21.3%, despite forecasts for economic contraction of 1.8% in 2019.4 Looking forward towards elections, the markets may ebb and flow in response to improving economic prospects and heightened political uncertainty. 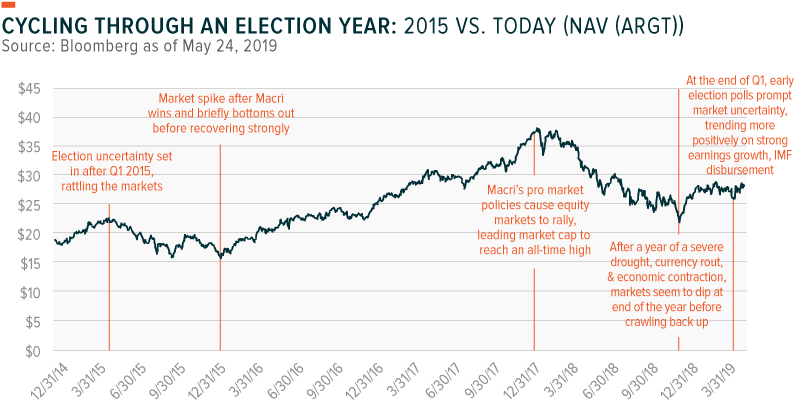 In March, Argentina received its third installment ($10 bn) of a $56 bn IMF package. The latest IMF disbursement should allow the Argentine Central Bank, or Banco Central de la República Argentina (BCRA) to sell more of its dollar reserves, pay down its debt, and boost the currency’s value. After the latest payment was released, and a booming harvest season began, the IMF again commended Argentine efforts, balancing their conviction in a gradual recovery with an acknowledgment that the Argentine government would need to closely manage expenditures.

Social unrest and the lack of a policy framework to effectively stabilize the exchange rate or ensure political cohesion make it difficult to overcome hypersensitivity in Argentina. And while elements of the current recession may seem familiar to witnesses of Argentina’s earlier crises, an upswell of support for a reversion to a populist-led government seems unlikely. Today’s responsive and market-friendly policy framework, which was largely absent in Argentina’s populist past, has helped improve the country’s structural issues and buoy it’s equity markets.

Argentina’s agriculture sector encourages much optimism. In April, export sales boosted the peso by nearly 2% at the start of the harvest. Dollar sales by corn and soy exporters, and their purchase of Argentine pesos, rose from an average of $60 mn per day in March to a hefty $91.5 mn in April.6 Projections estimate that the corn harvest will exceed the $3.2 bn in exports from the most recent harvest, while wheat production continues to surge.7

Upon taking office, Macri lowered and removed export taxes imposed by CFK on key commodities including corn, wheat and soy, which has allowed farmers to benefit from greater global demand and foster strong connections between the agricultural sector and Macri’s coalition. As part of the IMF bailout program, however, Macri was forced to revive the taxes temporarily to reduce Argentina’s fiscal deficit. Although the taxes have helped Argentina achieve its fiscal targets, they have combined with higher interest rates to constrict farmers’ fixed asset investment and output.

Macri’s relationship with the agricultural sector overall remains strong and the long-term impact of his earlier export tax reductions should continue to allow Argentines to benefit from higher potential agricultural output levels that have risen dramatically since CFK. Although some of the restrictive policies have not yet been lifted, the agriculture and business community are likely to remain supportive of centrist candidates that support more open market policies.

Results of regional elections, including key votes held in farmer-dominated Cordoba (Argentina’s largest province outside of Buenos Aires), suggest that regional centrist candidates aligned with Macri’s policies and coalition, have perhaps the best chance in this upcoming election cycle.

While there is still uncertainty who will challenge Macri in the presidential election, many anticipate one candidate could be the former economic minister Roberto Lavagna. Although he may face mixed reactions owing to his experience managing the fallout of the 2001 default, his decades-long work across parties and his leadership of the centrist Judicialist party may give him strong name recognition with the electorate and allow him to build a strong coalition platform within the legislature.8

While his name is perhaps the most recognizable, other centrist leaders who are rumored to appear on the pre-candidate list announced at end of June include high-profile leaders: María Eugenia Vidal, the governor of Buenos Aires province; Sergio Massa, former Cabinet member under CFK, who divorced himself from her leadership to form a new faction; Mario Negri, a career congressmen from Cordoba and leader in Macri’s Cambiemos party; and Juan Manuel Urtubey, Peronist Governor of Salta province and ally of Macri. While others may emerge, these centrists, who could run either alone or on a ticket with Macri, have a history of working across the political landscape, with Macri’s Cambiemos party as well as the historically dominant Peronist party.

Will the Center Hold?

Despite their support in growth-driving regions, centrist candidates may still have a challenging road ahead of them. Last week, CFK announced she would run in the fall Presidential elections. And while her announcement was highly anticipated, many were surprised that she announced her candidacy for Vice President, to her former cabinet chief, Alberto Fernández who will run for President.

Although she is currently embroiled in several corruption trials, her running mate could benefit from CFK’s devoted base, which represents roughly 30% of the population. Yet, her team will have the dual challenge of holding off another 30% of the population, which is vehemently opposed to her leadership, and swaying enough of the remaining 40%. Pairing of CFK and Alberto Fernández could allow the duo to steal votes from Macri and fragment the center, while giving CFK unusual runway from the Vice President seat to influence policy and direction. Although it would be less likely, a more cynical view, informed by presidential precedent in Latin America, suggests that following a successful election, CFK could exert pressure on her partner to resign the Presidency officially or by proxy over to her.9

Despite the surprise announcement and the potential success of her campaign, the growing mass of Argentina’s centrist coalitions and the outcome of CFK’s legal battles could outweigh CFK’s efforts and undermine her joint campaign. With deep divisions in CFK’s own Peronist party, and extensive support across the coalition Macri helped to build, it seems unlikely that the CFK camp will reverse the policies or unwind the coalition supporting the centrist government, regardless of whether Macri himself is reelected.

Despite Macri’s efforts to liberalize Argentina’s capital markets, tame inflation, and stimulate growth, persistently high inflation could be his Achilles heel in the upcoming elections.

Following persistent inflation hovering around 50%, and ineffective monetary policy which has allowed the peso to depreciate 20% year to date, Macri and the IMF encouraged the BCRA in its shift towards a more accommodative model.10 Breaking with its prior commitments, the BCRA announced that it will now intervene to buy and sell dollars outside of the currency band it implemented last year to manage its currency’s value.11

Aside from when the appropriate time to remove such an anchor would be, the question remains as to whether the exchange rate fix will hold long enough to reduce inflation to levels that sufficiently stabilize the economy, and whether that will precede the elections. Should markets be especially impatient, the results of this policy would likely need to be seen before the first round of elections in October.

Market reactions to changes in monetary policy could generate a tangible impact on elections. While the BCRA’s interventionist approach risks burning through its $72 bn of foreign reserves too quickly, market psychology plays a perhaps greater role. The real risk in the BCRA’s shift in monetary policy would be if markets became too skittish or impatient and undermined policy before it has enough time to stabilize the economy.

After bottoming in 2018, markets are demonstrating optimism in 2019 ahead of a pivotal year for the economy and political landscape. Argentina needs measured and responsive policy to avoid a protracted recession, stem inflation and halt currency depreciation. Litmus tests that will shed light on policy impact will be key regional elections and the success of centrist candidates on the campaign trail. And although potential policy failures could diminish Macri’s re-election potential, greater political consensus and centrism may still provide a pathway to a brighter economic outlook.

Investing involves risk, including the possible loss of principal. International investments may involve risk of capital loss from unfavorable fluctuation in currency values, from differences in generally accepted accounting principles, or from economic or political instability in other nations. Emerging markets involve heightened risks related to the same factors as well as increased volatility and lower trading volume. Securities focusing on a single country may be subject to higher volatility. ARGT is non-diversified.

Shares of ETFs are bought and sold at market price (not NAV) and are not individually redeemed from the Fund. Brokerage commissions will reduce returns. Global X NAVs are calculated using prices as of 4:00 PM Eastern Time. The closing price is the Mid-Point between the Bid and Ask price as of the close of exchange. Closing price returns do not represent the returns you would receive if you traded shares at other times.