As the Federal Reserve continues along its path of raising interest rates, many MLP investors have asked how these actions will impact MLPs. We believe there are two key considerations when assessing this question:

In this piece we will focus on addressing question 1 by analyzing the nature of the debt issued by midstream MLPs.

Given that MLPs distribute a significant portion of their cash flows to their unitholders, MLPs have historically been dependent on funding growth by raising capital either through equity or debt issuances. Recently, this has been changing, with a number of MLPs seeking to move to a self-funding model by retaining more cash flow to pay down debt and fund future growth opportunities. Given the recency of this shift, however, many MLPs still have leverage ratios (debt-to-EBITDA—Earnings before Interest, Taxes, Depreciation, & Amortization) between 4x and 5x, meaning debt continues to be an important part of their capital structure.

According to our research, 78% of midstream MLP debt is fixed-rate in nature, meaning coupon payments will remain the same throughout the life of the bond regardless of the rate environment.  Of the remaining debt in the MLP space, 17% is floating rate that is expected to experience increasing service costs as rates rise. The remaining 5% is structured as variable rate debt, usually in the form of fixed-to-float, where the bond pays a fixed rate for a specific period and then converts to a floating rate in the future.

At the entity level, the fact that over 3/4s of MLP debt is fixed helps insulate those MLPs from rising rates because the cost of servicing existing debt will not change even as rates rise. It is important to note however that debt that reaches maturity and is rolled over may need to be issued at a higher rate. In addition, new debt offerings, such as those to finance future capex projects, could require higher rates than existing debt. 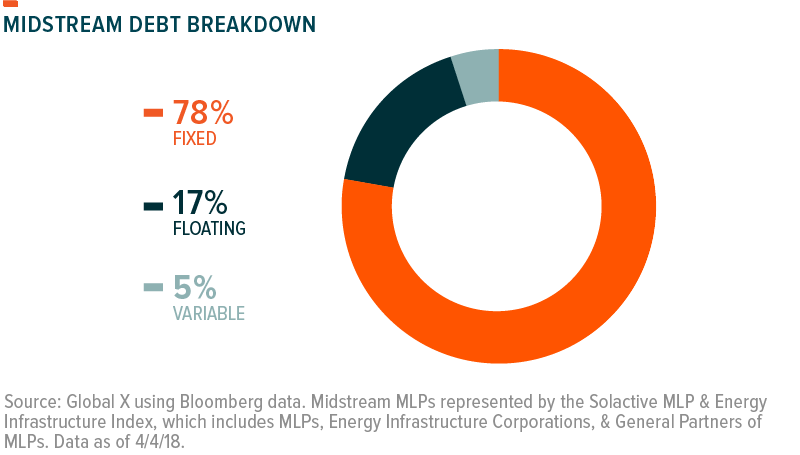 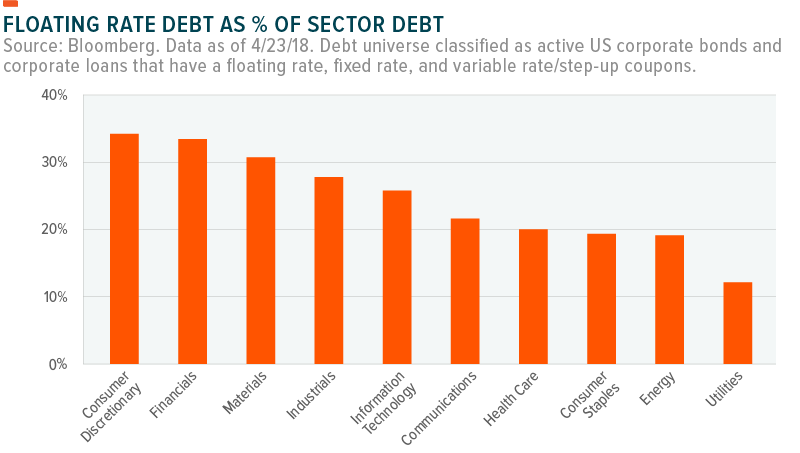 As rates move higher, investors may want to begin evaluating which sectors could have the most sensitivity to rising rates. We believe that cash flows for the midstream MLP sector should be well insulated from rising rates given that the majority of their debt is fixed-rate. As rates move higher, we believe it makes an even stronger case for MLPs to self-fund growth in an effort to avoid seeing increased costs of capital in the debt markets.

MLPA: The Global X MLP ETF invests in some of the largest, most liquid midstream master limited partnerships (MLPs)

MLPX: The Global X MLP & Energy Infrastructure ETF is a tax-efficient vehicle for gaining access to MLPs and similar entities, such as the general partners of MLPs and energy infrastructure corporations.

Floating rate debt: floating rate debt is where the coupon is usually referenced against an interest rate benchmark such as LIBOR (London Interbank Offering Rate) and includes an additional pre-defined interest spread on top of that reference rate.

The Global X MLP Funds do not invest in the debt of MLPs, but rather the MLPs themselves.

Investing involves risk, including possible loss of principal. International investments may involve risk of capital loss from unfavorable fluctuation in currency values, from differences in generally accepted accounting principles or from economic or political instability in other nations. Investments in securities of MLPs involve risk that differ from investments in common stock including risks related to limited control and limited rights to vote on matters affecting the MLP. MLP common units and other equity securities can be affected by macro-economic and other factors affecting the stock market in general, expectations of interest rates, investor sentiment towards MLPs or the energy sector, changes in a particular issuer’s financial condition, or unfavorable or unanticipated poor performance of a particular issuer (in the case of MLPs, generally measured in terms of distributable cash flow). The Global X MLP Funds invest in the energy industry, which entails significant risk and volatility. The Funds invest in small and mid-capitalization companies, which pose greater risks than large companies. The Funds are non-diversified.

MLPA has a different and more complex tax structure than traditional ETFs and investors should consider carefully the significant tax implications of an investment in the Fund. MLPA is taxed as a regular corporation for federal income tax purposes, which differs from most investment companies. Due to its investment in MLPs, the fund will be obligated to pay applicable federal and state corporate income taxes on its taxable income, as opposed to most other investment companies. The fund expects that a portion of the distributions it receives from MLPs may be treated as tax-deferred return of capital. The amount of taxes currently paid by the fund will vary depending on the amount of income and gains derived from MLP interests and such taxes will reduce an investor’s return. The fund will accrue deferred income taxes for any future tax liability associated certain MLP interests. Upon the sale of an MLP security, the fund may be liable for previously deferred taxes which may increase expenses and lower the fund’s NAV.