From KEJI’s inception date, February 22, 2021, to March 31, 2021, the Global X China Innovation ETF returned -20.52%. This compares to a return of -11.91% for the MSCI All China Index, the fund’s benchmark, over the same period. In this piece, we’ll discuss the broad market drivers in China during Q1 2021 as well as the specific exposures in KEJI that impacted the fund’s performance during the period. KEJI is sub-advised and actively managed by Mirae Asset Global Investments (Hong Kong) Limited. For more information on China’s equity market performance in Q1 2021, please read our China Sector Report, here.

The performance data quoted represents past performance and does not guarantee future results. Investment return and principal value of an investment will fluctuate so that an investor’s shares, when sold or redeemed, may be worth more or less than their original cost. Current performance may be higher or lower than the performance quoted. For performance data current to the most recent month end, please click here. Total expense ratio: 0.75%

China’s economic recovery continues to build momentum. After being the only major economy to post positive growth in 2020, China is expected to continue growing at a higher rate than much of the rest of the world in 2021. In its April outlook, the IMF revised its forecasts for Chinese growth upwards to 8.4% for 2021 thanks to strong external demand tied to unprecedented stimulus packages within advanced economies. And while we have already seen a recovery in industrial, investment, and trade data from China, further growth will likely be aided by policies favoring a full recovery in consumption.

Despite strong macroeconomic tailwinds from China, its markets sold off 11% during Q1 2021. This is partly explained by rising 10-year US treasury yields, which supported US dollar and value-oriented assets, and hurt overseas and growth-oriented assets. Concerns over a preemptive tightening in monetary policy also contributed to the sell-off. Furthermore, some investors may have reacted bearishly to China’s announced growth target of over 6% and statements that suggested it would try to curb debt.

The Healthcare Innovation theme performed well since inception, attributable to the continued demand for healthcare products and services amid the pandemic. The Robotics & AI theme also began to perform positively with the expectation of higher capital expenditure and export demand within the manufacturing sector, following broad shutdowns during COVID-19.

The Autonomous & Electric Vehicle (EV) theme contributed to negative performance in the portfolio despite commitments by global governments, including in Beijing and Washington, to achieve carbon neutrality. Auto producers globally faced long shutdowns because of a semiconductor chip shortage, which was compounded by blackouts in Texas and a fire at a Japanese foundry.

Meanwhile, battery producers within the Autonomous & EV theme had to contend with higher input costs with cobalt and lithium prices rallying and cutting into their margins. While the commodity rally hurts these firms in the short-term, major auto manufacturers are beginning to roll out longer-term strategies to offset the impact of rising lithium and cobalt costs. This includes longer-term contracts, reducing reliance on cobalt, and a unified battery cell – which is a more favorable battery type for Chinese manufacturers.

And while VW’s announcement to produce their own batteries internally may be a challenge for Chinese battery producers, Chinese companies like Contemporary Amperex Technology Co (CATL) and BYD have already scaled their businesses to produce high-quality and low-cost batteries in mass and are important players in the global EV supply chain.

While the impact of the chip shortage on the auto space is expected to last until Q3 2021, at least, and the input costs for producers are high, EV demand is likely to continue surging on the back of clean energy initiatives in the public and private sector globally.

The Climate Change theme also faced headwinds during the period due to rising costs in the solar panel supply chain as well as profit-taking in a segment that has experienced strong performance over the last twelve months. Solar panel producers faced short-term headwinds with the cost of key polysilicon inputs rising over 50% in the last six months. But increasing demand for clean energy sources and long term trends of falling solar panel costs should combine to power strong growth for this segment in the future. 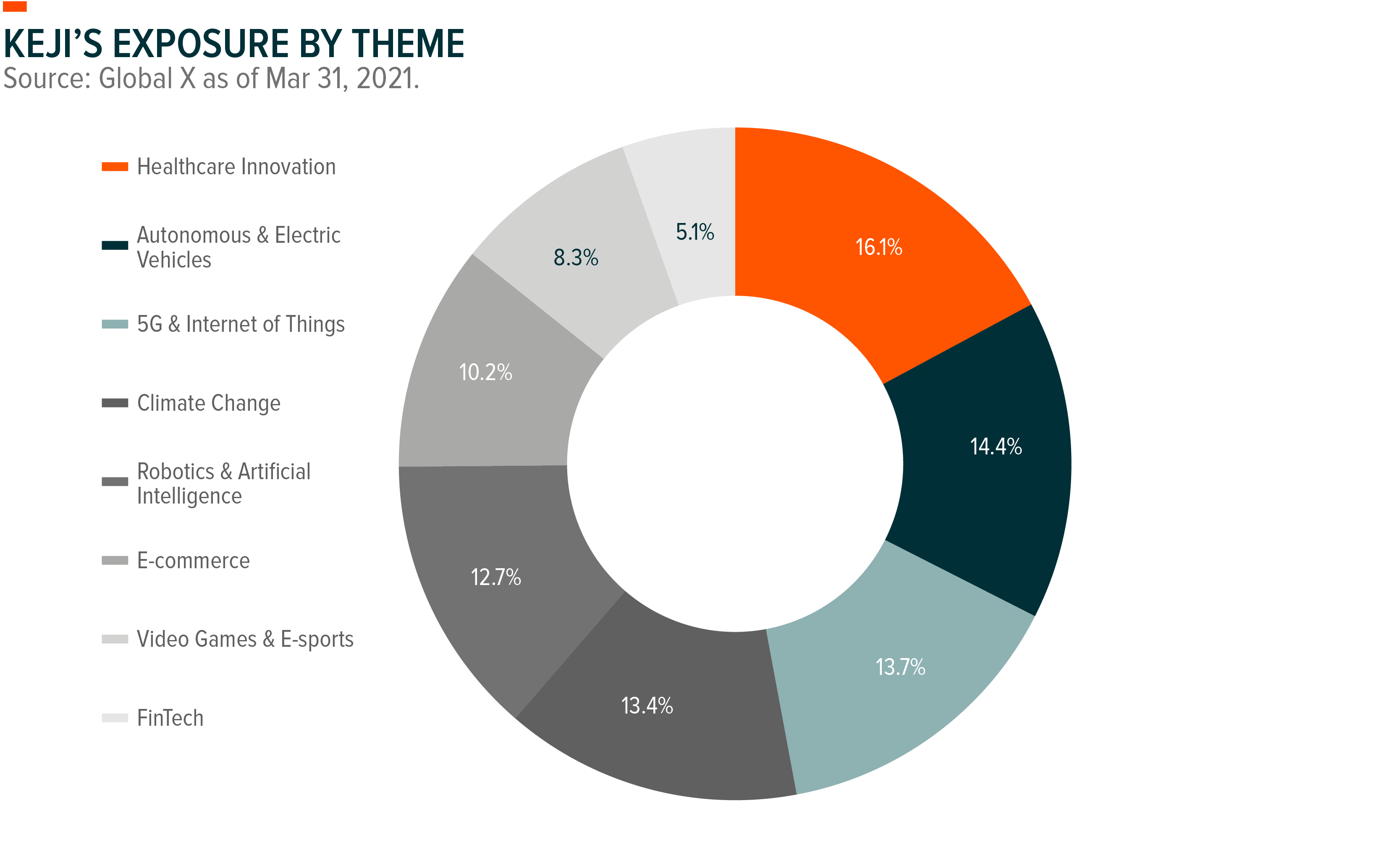 KEJI currently has a 26% weighting the IT sector, which includes companies involved in building electric vehicles and solar power cells, as well as developing 5G networks & IoT devices. Increased concerns over domestic regulatory scrutiny of tech companies combined with the SEC’s adoption of the Holding Foreign Companies Accountable Act contributed to a broad selloff of Chinese tech stocks in March. For reference, the Global X MSCI China Information Technology ETF (CHIK) sold off nearly 13% during the last month of the quarter. KEJI also has 16% exposure to the Health Care sector, given the emergence of China’s innovative drug supply chain centered around Shanghai’s biotech hub. Health Care stocks fared better than IT in March, outperforming the MSCI China Index during the month.

KEJI’s underweight to sectors like Financials and Real Estate are linked to the fact that these are already fairly mature sectors with less disruptive companies residing within them. In this particular period, KEJI did not benefit from this underweight. Most sectors fell, including Financials, but Financials did not fall by as much.

Companies that the portfolio managers are most enthusiastic about tend to meet two criteria:

Examples of areas where Chinese firms often meet these criteria are in the electric vehicles and battery space, as well as solar panel production and renewable energy supply chains. Firms in these areas have high growth potential themselves and have helped China become an established leader in the global EV, battery, and cleantech themes. China for example, produces 80% of solar panels globally and is home to the world’s leading manufacturers in the space.1 The same can also be said for the EV battery supply chain in China, which produces 80% of battery cell capacity.2 Chinese EV battery companies have relatively lower costs, which has helped them become one of the world’s largest auto exporting markets.

Another area that KEJI’s portfolio managers are bullish on is telemedicine, which resides within the Health Care Innovation theme. Companies like Ping An have developed disruptive technologies to solve industry inefficiencies across the health care landscape in China. Ping An is a leader in providing online medical consultation services, mainly with its own highly-trained in-house doctors. While the company continues to operate at a loss, its spending aimed at establishing a presence across regions should set it up for long term growth. We anticipate that the platform will continue evolving into a more comprehensive one-stop medical service, ranging from conducting general and specialist consultations and chronic disease monitoring and management services, to offering hospital management and IT services and software.

With all the uncertainty brought by COVID, China opted for a more conservative growth target of above 6% for 2021. China’s growth rate of 18.3% in Q1 puts it on a likely course towards surpassing that goal and hitting the IMF’s projected rate of 8.4%. Looking beyond 2021, the Chinese government has already signaled its intent to focus on innovation over the next five years. At the Fourth Plenary Session of the 13th National People’s Congress in March, China showed that it became acutely aware of the need for innovation as a driver of economic growth. The 14th five-year plan emphasizes breakthroughs in crucial fields like AI, 5G and Semiconductors, while also outlining plans to increase nationwide R&D spending by over 7% annually. This push for innovation could help accelerate the growth of several themes targeted by KEJI.