The Global X China Innovation ETF (KEJI) posted a return of -20.56% in Q1 2022. By comparison, the MSCI All China Index, which serves as the benchmark for KEJI returned -14.26% over the same period. In this piece, KEJI’s portfolio managers discuss how China’s changing market conditions affected the fund and our strategy going forward.

The performance data quoted represents past performance and does not guarantee future results. Investment return and principal value of an investment will fluctuate so that an investor’s shares, when sold or redeemed, may be worth more or less than their original cost. Current performance may be higher or lower than the performance quoted. For performance data current to the most recent month end, please click here. Total expense ratio: 0.75%.

Q1 2022 was a challenging period for Chinese growth-style investments. Many of our holdings suffered from weaker growth expectations and deteriorating sentiment across the Chinese equity markets. Growth slowed down due to the resurgence of COVID-19 and raw material inflation, which hurt the Chinese manufacturing sector. Although we believe that China’s large talent pool will enable it to deliver high growth in emerging areas of manufacturing – such as batteries, solar power, and automation – in recent months these sectors have also suffered from elevated commodity prices.

China’s GDP growth in Q1 came in better than expected at 4.8% year-over-year. However, quarter-to-quarter (QoQ) growth slowed to 1.3% in Q1 2022 compared to 1.5% QoQ growth in Q4 2021, with numerous headwinds raising concerns over a potential delay in China’s economic recovery.1 In January, equities tumbled on more hawkish than expected U.S. Federal Reserve monetary policy, sparking fears across global equity markets. Performance in China fell further in February and March, driven by concerns from multiple fronts, including: 1) the regulation of internet platform companies, 2) Russia’s invasion of Ukraine, 3) the Omicron outbreak in China, and 4) rising inflation.

Daily new COVID-19 cases crossed 7,000 at the end of March compared to 359 at the end of February and major cities, including Shenzhen and Shanghai, were forced into strict lockdown.2 The disruption significantly impacted not only Shanghai’s consumption and services sectors, but also, to some degree, production and intra-city transportation logistics, as Shanghai’s port is the largest in the world.

Despite these recent headwinds, portfolio-wise, we are not compelled to make any significant changes as most of our holdings are now priced at attractive valuations. 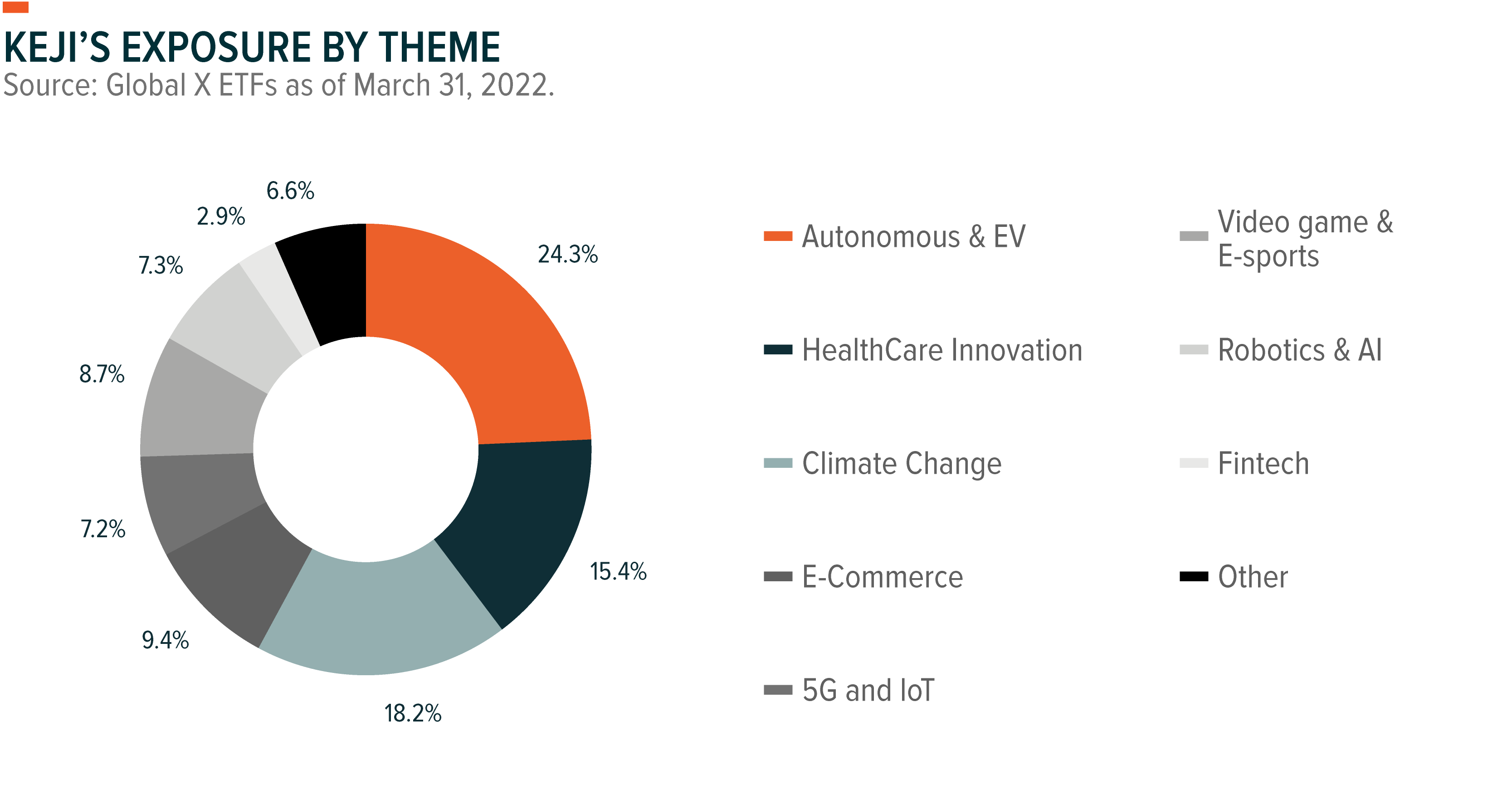 For internet platform companies like Tencent and Alibaba, the biggest risk was the potential drag in regulation, which created uncertainty for their future growth prospects and impacted near-term earnings. However, following a pivotal meeting convened by Vice Premier Liu He, we now believe that these companies have exited the bottom of the cycle. One of his key messages was that government ministries and agencies should be careful to not to harm the development of the capital markets and that any sensitive regulations should be conducted in coordination with the country’s economic minister before being rolled out. This is what we have long anticipated.

Over the last few quarters, regulations on internet platform companies were released without sophisticated coordination or adequate consideration of their knock-on effects. The Vice Premier’s message called for coordination across government agencies in implementing regulation and for reduction of the impact on the market and economy.

There are increasing market fears that the latest Omicron outbreak in China, particularly in Shanghai, might result in significant disruptions to economic activity as China continues to maintain a strict zero-COVID approach. Since March 27th, Shanghai, a city of 25 million people, has been effectively in lock down until the time of writing.

Some have suggested that China may keep its strict pandemic policies until the National Party Congress in August 2022. In the meantime, however, we have seen positive signals from Hong Kong’s experience of Omicron over the last few months, which provides valuable lessons to China in managing outbreaks. Since the start of the pandemic, there have been 1.2 million confirmed cases in Hong Kong and almost 9,000 deaths, implying a fatality rate of 0.8%. However, the Hong Kong government reported that 90% of the fatalities impacted those who were unvaccinated.3

Furthermore, according to analysis conducted by the Public Health School at Hong Kong University, both the BioNTech and Sinovac vaccines are highly effective in reducing the severity of the virus and protecting against death if a third dose has been administered. We believe that if China is able to accelerate its vaccination program and increase the rate of booster shots, then the country will be in a better position to relax its control measures. As of end of February, around 87% of China’s population has received two doses, while only around 40% have received a booster.4

We expect the current lockdown of certain cities, like Shanghai, will lead to a contraction in retail sales, industrial production, and trade activity over the coming months, but the country will be more prepared to live with COVID-19 once the ratio of booster shots achieves critical mass. 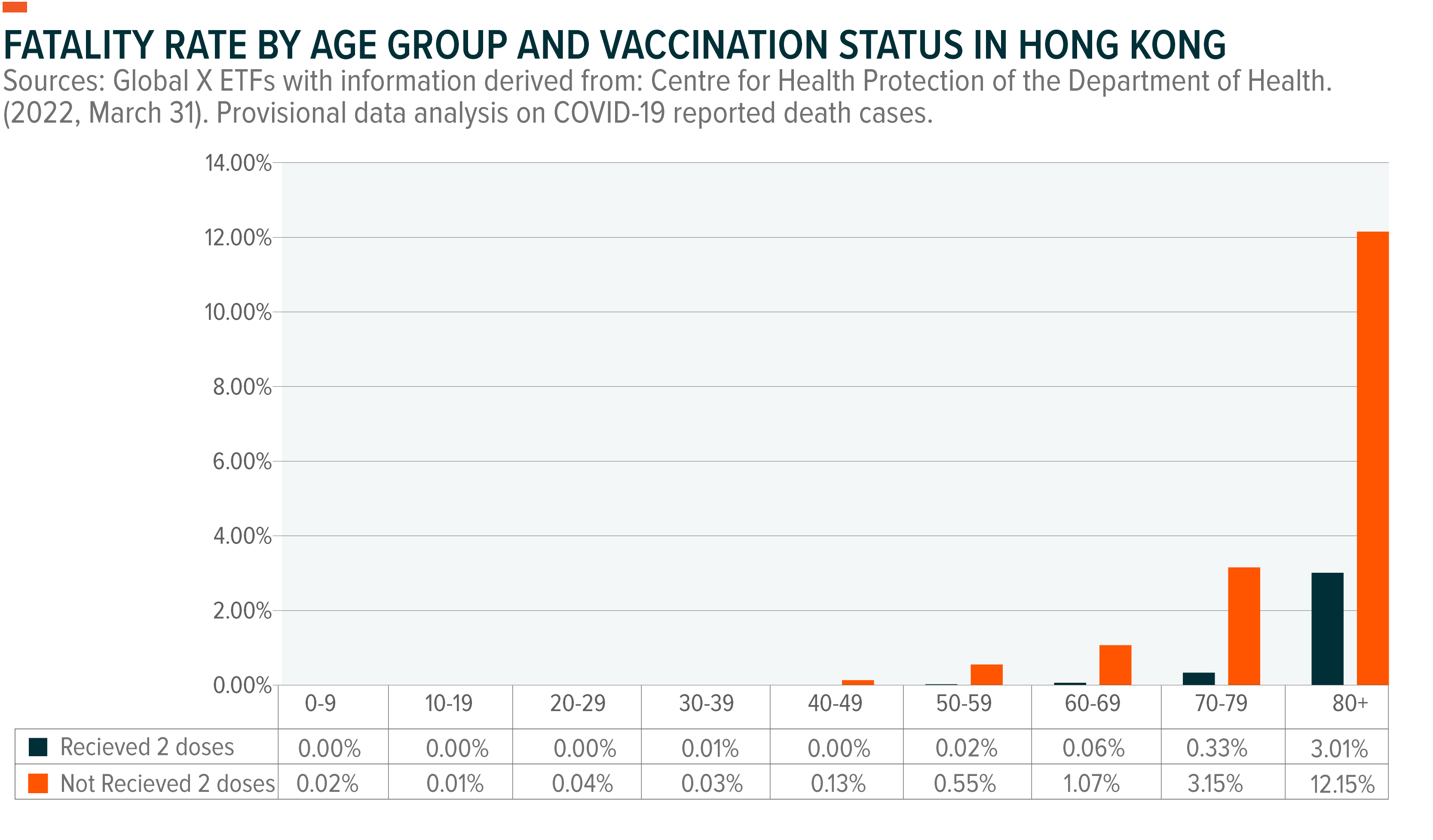 Market Might Be Overestimating Impact of Battery Cost Inflation

Battery cost inflation became another concern as lithium and cobalt prices rallied on the back of Russia’s invasion of Ukraine. This triggered a correction of stocks within the electric vehicle (EV) and battery supply chain sectors. However, compared to the market, we are less concerned about this issue.

Firstly, based on conversations with industry experts and analysts, spot prices are not the actual prices paid, as the blended lithium prices which major companies pay are often significantly lower. Additionally, major battery and EV companies have managed to pass through most of their cost inflation. Over the last couple of months, many companies competing in the Chinese EV market, such as Tesla and BYD, have increased their manufacturer’s suggested retail price (MSRP) to offset the cost pressure. Investors are now waiting to see the impact on demand in subsequent months; however, initial data indicates that order intakes are still strong.5

Secondly, gasoline and diesel price hikes (25% year-on-year in China in March) and consumer expectations of further increases in fuel costs will encourage greater consideration and adoption of EVs rather than internal combustion engine models.6

We believe that higher energy prices for natural gas and coal provide a significant tailwind to the solar module industry. This is especially true in the United States, where natural gas has been abundant and solar power has struggled to compete with cheap natural gas. Solar power generation was almost as cost effective as gas power generation in the United States in 2020 and the supply shortage of natural gas caused by the war in Ukraine will likely push gas prices up and potentially close that gap.7 According to Bloomberg NED in 2021, solar has already become the cheapest energy source in four of the highest energy consumption markets like China, the United States, Europe, and India.8 As such, we maintain our bullish view on the solar supply chain with the expectation that its growth will accelerate in the next couple of years. 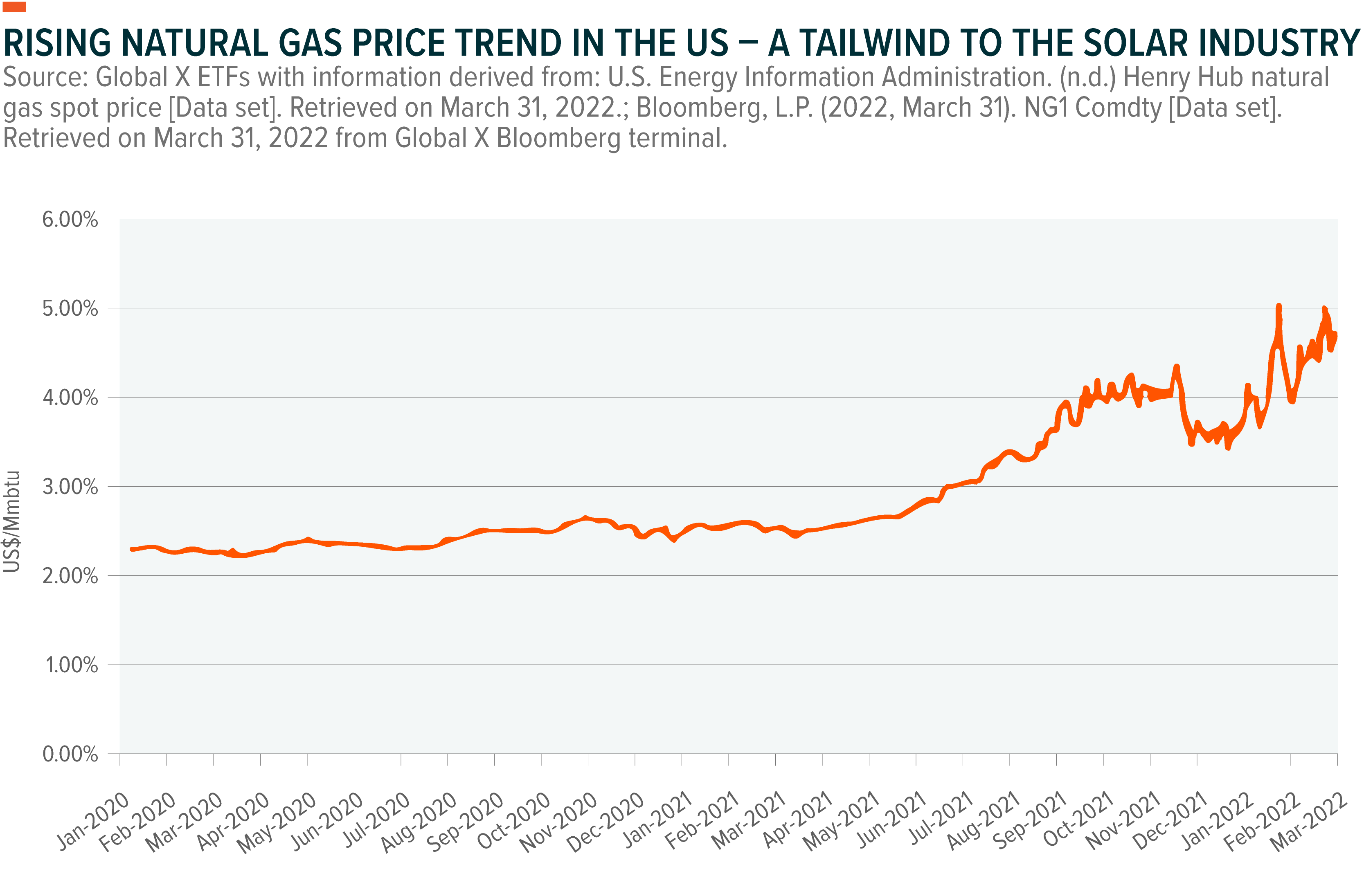 Investing involves risk, including the possible loss of principal. International investments may involve risk of capital loss from unfavorable fluctuation in currency values, from differences in generally accepted accounting principles, or from economic or political instability in other nations. Emerging markets involve heightened risks related to the same factors as well as increased volatility and lower trading volume. Securities focusing on a single country and narrowly focused investments may be subject to higher volatility. KEJI is non-diversified.