The Global X China Innovation ETF posted a return of 4.68% in Q2 2022. By comparison, the MSCI All China Index, which serves as the benchmark for KEJI returned 2.90% over the same period. In this piece, KEJI’s portfolio managers discuss how China’s changing market conditions affected the fund and our strategy going forward.

The performance data quoted represents past performance and does not guarantee future results. Investment return and principal value of an investment will fluctuate so that an investor’s shares, when sold or redeemed, may be worth more or less than their original cost. Current performance may be higher or lower than the performance quoted. For performance data current to the most recent quarter or month end, please click here. Total expense ratio: 0.75%.

Chinese markets were volatile during the second quarter of 2022. Earlier in the quarter, the market stumbled on fear over the invasion of Ukraine and headwinds from Shanghai’s two month long lockdown. The portfolio suffered with Electric Vehicle (EV) battery and all growth stocks plummeting as the price of raw materials rallied on speculation of supply shortages. However, later in the quarter, China’s economic recovery after the end of the Shanghai lockdown and a reduction in raw material cost pressures helped most of our holdings rebound.

After enduring depressed economic conditions for nearly two years due to a combination of regulatory overhang, the zero-Covid induced lockdown, and deleveraging in Real Estate, we are now turning more positive towards China’s stock markets. Our optimism is driven by several factors: 1) the regulatory crackdown on internet platform companies seems largely behind us, 2) we do not expect another lockdown on the scale of Shanghai’s in the near future, and 3) the government has a strong incentive to boost the economy ahead of highly important political events in November 2022.

Within the portfolio, we maintain meaningful exposure to the growth themes of Autonomous & Electric Vehicles, Healthcare Innovation, and Climate Change, among others. 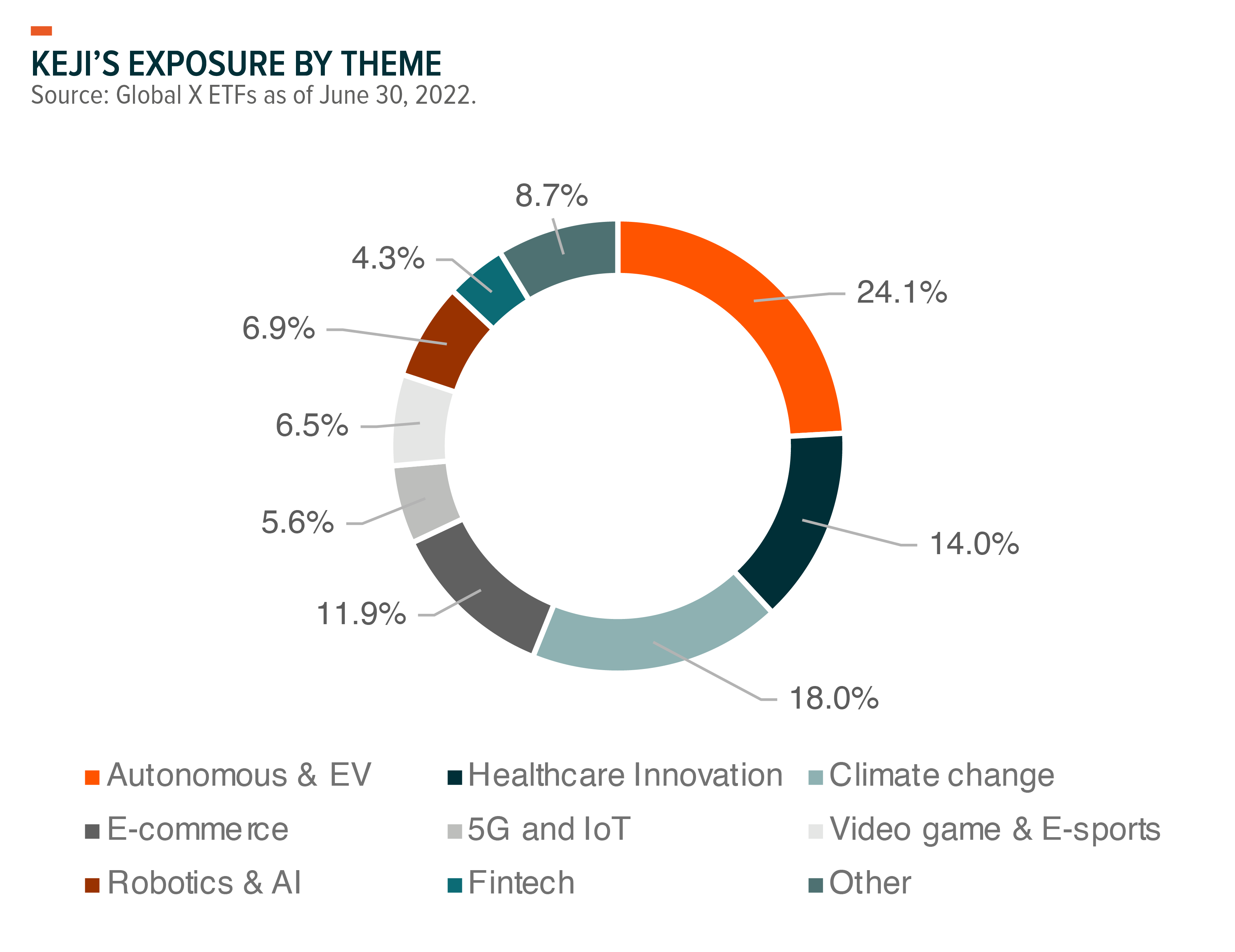 For some time, EV battery experts have warned that the supply of key materials like lithium and cobalt might not be sufficient, leading to sharp cost increases. As a result, demand for EVs may be sluggish, and the battery supply chain may experience a margin squeeze.

That’s exactly what happened when lithium prices increased seven-fold in the twelve months leading up to March 2022.1 Naturally, the share prices of relevant stocks corrected between January and April.

However, to the surprise of many, the EV penetration story did not grind to a halt. It only gained momentum. In China, the EV (including Plug-in Hybrid EVs, also known as PHEVs) penetration ratio reached 26% in May 2022, up from 20% in December 2021.2 There were two crucial pieces of context underlying this rise. First, while EV battery costs were rising, maintenance costs for traditional engine vehicles rose at nearly the same rate. In China, retail gasoline prices increased 60% year-on-year between March 2021 and June 2022. In simple math terms, we found that the maintenance cost gap widened to nearly $2,000 per annum between EVs and Internal Combustion Engine (ICE) vehicles when considering June fuel prices.3,4

Second, consumers now feel familiar with and are more comfortable buying EV models, regardless of cost. This is because consumers have started to appreciate the various value propositions of EVs, ranging from design, smooth acceleration, wider interiors, and camping usage, among many others.

Therefore, after withstanding the biggest risk, we are now more confident that EV penetration will be maintained in the foreseeable future.

Shanghai suffered a two-month total lockdown while China’s equity market corrected even more on fears that Shanghai’s predicament might unfold in other cities. Despite understandable anxiety, a total lockdown seems less likely in other major cities.

In hindsight, Shanghai, a city with 27 million residents, was not ready to fight the Omicron variant because the city officials did not adjust the protocols that worked well against Delta, a variant with a significantly lower rate of transmission. In contrast, Shenzhen updated its protocol to keep the Omicron variant at bay. First, the city used pooled sampling to increase its testing capacity, which helped identify infected individuals much quicker with less test kits. Second, it immediately implemented partial lockdowns when a cluster was found. The result was quite encouraging – Shenzhen only suffered a one-week total lockdown in late March and recovered to normal economic activity soon after.

After identifying which policy against the virus was most effective, most cities in China now follow the Shenzhen model: quickly identifying those infected and quick lockdowns for the affected region. This strategy may prevent another unexpectedly long total lockdown similar to what we saw in Shanghai from happening again, though partial lockdowns are inevitable.

The fight against inflation and the subsequent recession risks have become major headwinds for global equity markets this year. Luckily, and perhaps unusually, China has not seem to be affected by inflation this year.

Aside from geopolitical risks related to Ukraine and COVID-led supply disruptions, the main cause of current inflationary pressure lies in the excessive fiscal and monetary policies of advanced economies over the last two years. In the early days of the fight against COVID, aggressive handouts and subsidies in the US were successful in boosting its economy and labour market. However, these decisions eventually contributed to elevated and excessive demands for goods, port congestion, and inflation.5 Therefore, in a bid to cool down inflation, the US resorted to introducing interest rate hikes.

To the surprise of many, China did not do as much to boost its economy over the last two years compared to its prior actions during the Great Financial Crisis. This was due to the government’s continued focus on carrying out a deleveraging campaign in the property industry and other over-supplied industries. The Chinese government introduced stringent regulations on internet platform companies, resulting in halted business decisions and hiring cancellations. On top of that, China’s zero-COVID policy reduced the likelihood of rising money multipliers, or in other words a greater increase in the total money supply, even as the central bank loosened monetary conditions. In aggregate, these actions suggest that China has maintained a tightening economic stance over the last two years. New total social financing (TSF) growth rate, a popular gauge of liquidity conditions, was -10% in 2021.6

As a result, China had only about 2.5% Consumer Price Index (CPI) in June, while US CPI reached 9.1%. We expect China can manage to keep CPI at around 3% by the end of the year, given the cracks in the labour market.

Largely speaking, Asian countries were able to better manage the pandemic in the earlier stages and have thus avoided the need for generous subsidy handouts. That leaves many of them in a similar position with China. As such, inflationary pressures should be less severe than in the US and Europe, which are also more directly affected by Russia’s invasion of Ukraine. In absolute terms, the inflationary environment is not good for Asia. In relative terms, however, Asia appears better positioned than other major markets over the coming quarters. 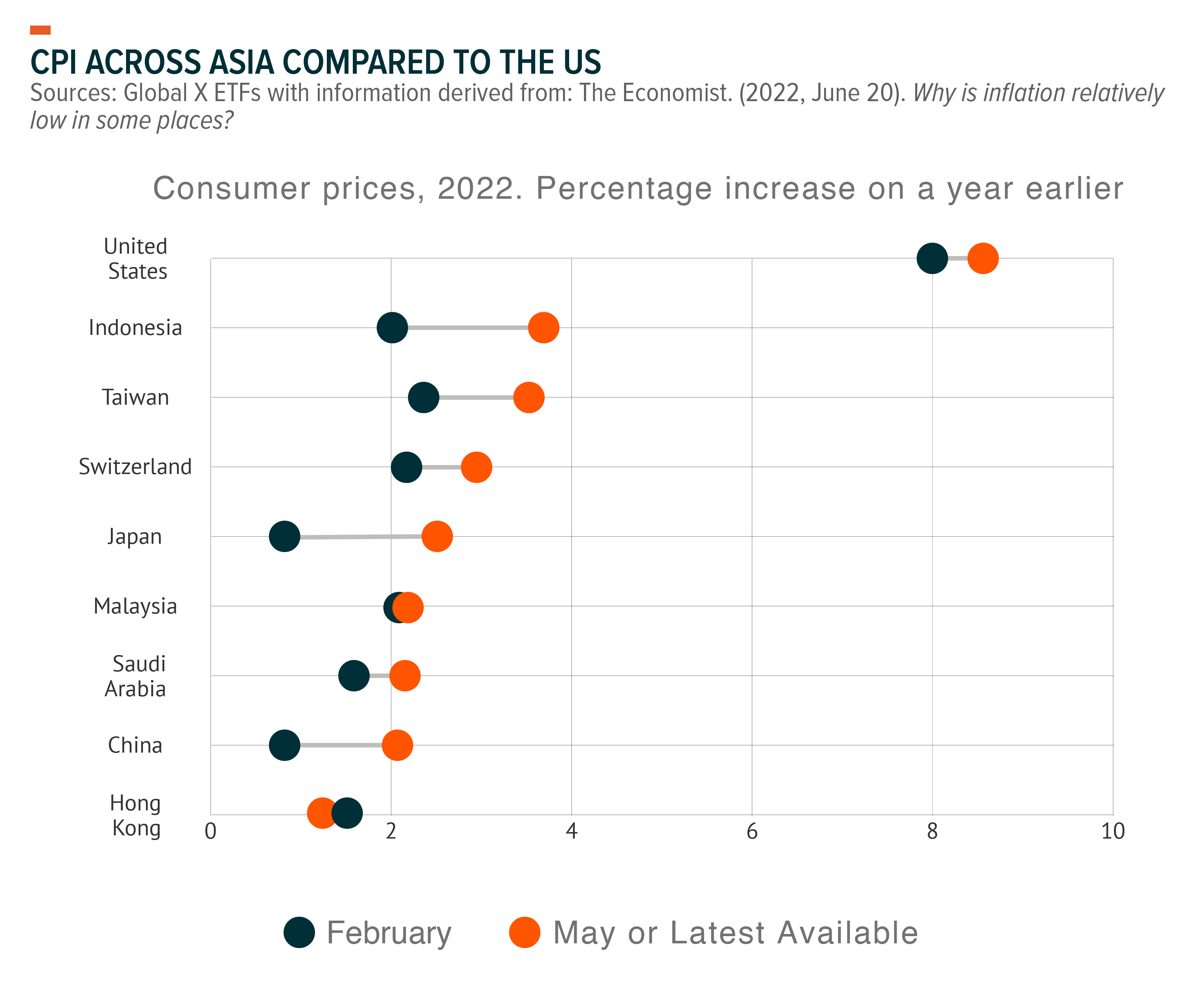 The cooling down of the US economy might lead to weaker demand for goods and an inventory correction for Asian exporters. That was the reason why Vietnam suffered a sharp correction in Q2, as the small economy is highly dependent on global trade. In fact, its trade value was more than 100% of GDP in 2021.7 Korean and Taiwanese markets also corrected on the general fear of a looming downturn for semiconductors.

We do not believe a decline in demand for exports will be significantly adverse for KEJI. Of course, several core holdings like CATL (battery maker) and LONGi Green Energy (solar power) have sizable exposures to overseas markets, but their demand does not seem to be affected by the consumption of general goods.

A Metal Price Correction Should Work in Favor of Many Holdings

As we see it, metal and commodity prices might diverge. Crude oil supply is still in a fragile state due to issues in Russia. On the contrary, other industrial metal prices are likely to pull back, mainly due to China’s prolonged property market downturn.

We are sure that the Chinese government will look to boost infrastructure investments in the second half of  2022, but that will likely be insufficient to fill the gap from the investment shortfall in China’s property. We welcome the recent correction in metal prices as many of our holdings, such as in EV battery, Solar, Wind, and Automation, should enjoy a greater margin upside.

This material represents an assessment of the market environment at a specific point in time and is not intended to be a forecast of future events, or a guarantee of future results. This information should not be relied upon by the reader as research or investment advice regarding the funds or any stock in particular.

Investing involves risk, including the possible loss of principal. The investable universe of companies in which KEJI may invest may be limited. In addition to the normal risks associated with investing, international investments may involve risk of capital loss from unfavorable fluctuation in currency values, from differences in generally accepted accounting principles or from social, economic or political instability in other nations. Emerging economic themed companies typically face intense competition and potentially rapid product obsolescence. Thematic companies may have limited product lines, markets, financial resources or personnel. They typically engage in significant amounts of spending on research and development, capital expenditures and mergers and acquisitions, and there is no guarantee that the products or services produced will be successful. KEJI is non-diversified.