The Global X China Innovation ETF returned -3.01% during Q4 2021. In comparison, the MSCI All China Index which serves as the benchmark for KEJI returned -2.53% over the same period. In this commentary, we will discuss China’s changing market conditions and how they relate to KEJI’s performance.

The performance data quoted represents past performance and does not guarantee future results. Investment return and principal value of an investment will fluctuate so that an investor’s shares, when sold or redeemed, may be worth more or less than their original cost. Current performance may be higher or lower than the performance quoted. For performance data current to the most recent month end, please click here. Total expense ratio: 0.75%.

In the face of multiple headwinds last year, sentiment towards China’s economy waned. An unexpected rollout of stringent policies against certain growth industries in China, including big internet platforms, created headwinds as China sought to rebalance its economy. The property sector—a pillar of economic growth—slowed down as the Chinese government pushed a stringent deleveraging campaign in the wake of the Evergrande fallout. These factors made last year a tough year for growth-style stocks. But by the end of the year, the government had started to loosen these policies.

As we head into 2022, KEJI’s portfolio managers hold a more constructive view of growth-type stocks which are trading at more attractive valuations after sizeable corrections in the previous year. 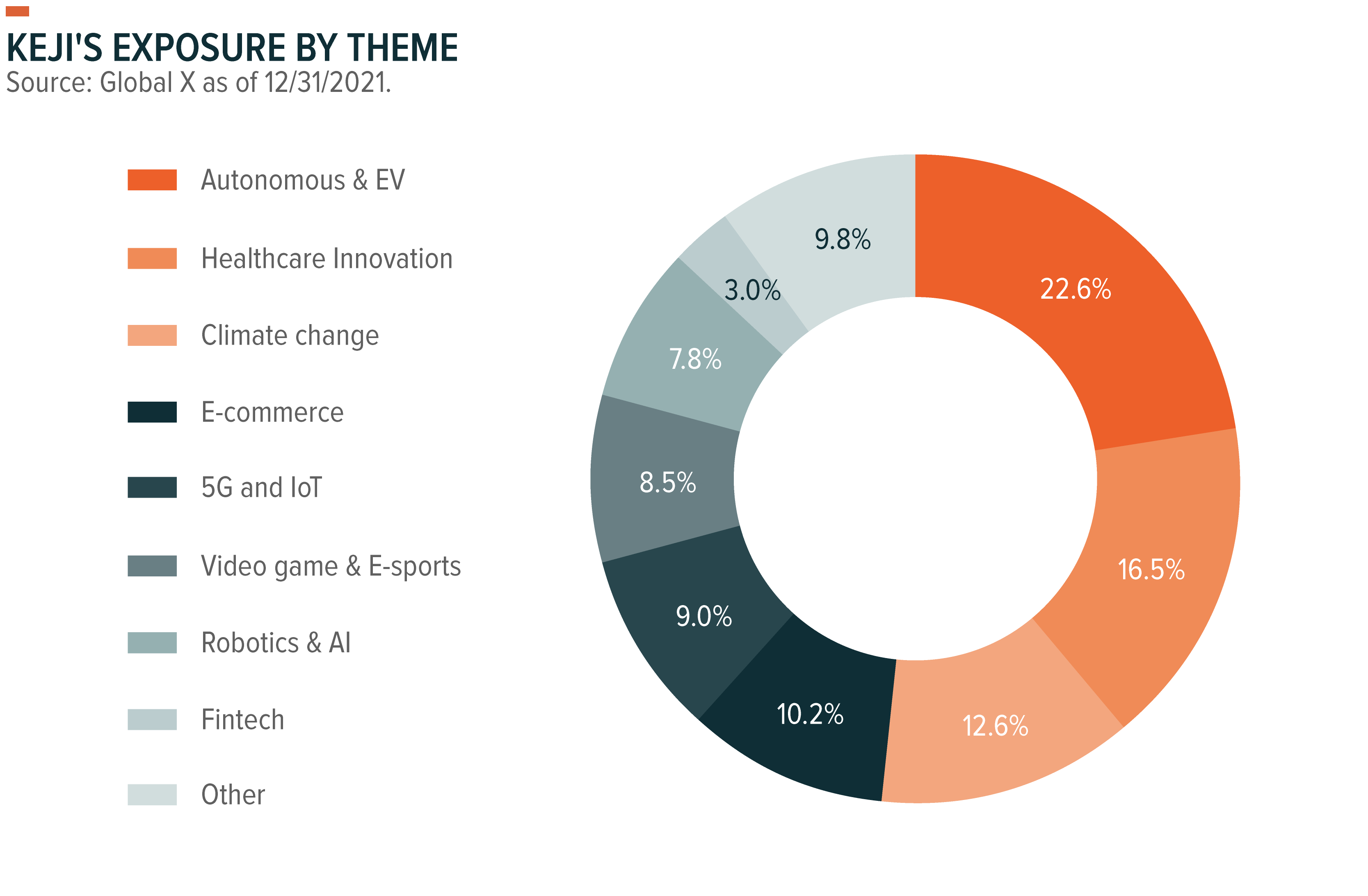 Macroeconomic Challenges from US Interest Rate Hikes Should be Manageable

The US Federal Reserve (Fed) announced in December last year that it would raise interest rates in 2022 to curb inflation, raising market concerns over the potential impact on the Chinese economy. However, compared to the last tightening we saw in 2018, the potential impact will be different this time—the current inflation phenomenon is largely driven by the US, from the portfolio managers’ observations.

The Fed has implemented unprecedented fiscal and monetary loosening policies since the COVID-19 pandemic. While the US has made significant efforts to boost its economy, the portfolio managers consider it to be overstretched. In contrast, these inflationary pressures aren’t found in China because it didn’t follow the same path, partially due to the manufacturing and supply chain leaders that emerged in places such as South Korea, Vietnam, and Taiwan.

As the Fed seeks to unwind the policies from the global pandemic, interest rates and therefore the US dollar will likely rise while other currencies may depreciate against it.

Currency is largely determined by the following three factors: i.) current account balance, ii.) real interest rate differential and iii.) capital flows. The real interest rate in the US after taking inflation into account, remains deeply negative and widens the interest-rate gap between China and the US. China is likely to continue with an ample current account surplus on the back of expected export growth of 10% in 2022.1 As China continues to open up its capital markets, the managers expect there to be positive net capital inflows in 2022, which could dampen the potential depreciation pressure on the Chinese yuan.

As a result, after the massive corrections in 2021, the managers consider Chinese equity valuations to be attractively valued—despite the Fed’s announcement that it would implement three-to-four interest-rate hikes in the coming year.

The United Nations Climate Change Conference (COP26) held in November 2021 reinforced a strong global consensus for the need to reduce carbon emissions. Even when the political context is stripped away, the clean technology industry is supported by a strong economic value because its production costs—including solar modules, wind-generated power or electric vehicles (EVs)—are already competitive against its incumbents such as coal-powered plants or traditional internal combustion engine (ICE) vehicles. These advancements have all been made possible on the back of favorable monetary support from government policies. Overall, the managers believe the clean energy industry is a major growth sector in 2022, as the global push for net zero will intensify over the course of the year.

For solar, installations fell below expectations in 2021 due to a few factors. The cost of key materials increased on the back of increased demand, increasing the cost of polysilicon by over 100%. That said, the managers do not think polysilicon capacity issues will run into 2022 as supply chain pressures should ease up. Looking ahead, they see some growth opportunities within the solar industry. According to estimations by the International Energy Agency (IEA), annual solar installations will increase fourfold between 2020 and 2030 to achieve its net-zero goal by 2050.2 Fundamentally, the cost of producing solar energy is now cheaper than coal, and is a key factor which could continue to propel clean energy technology to the forefront of investors’ minds.

There are some concerns that an eventual oversupply in the solar supply chain, or rising competition will lead to lower margins for the general industry. However, the fund managers think these up-and-coming competitors are not industry competitors, but those companies involved in thermal coal that are attempting to pivot into solar. As long as the cost of solar remains cheaper than the cost of producing coal, a potential oversupply should bring in value into the solar supply chain. An oversupply in solar-generated energy should likely accelerate the general transition to clean energy. As a result, they are particularly interested in every section of the solar supply chain—each with its own potential opportunities.

Electric vehicle (EV) and battery stocks in China experienced a market correction over December and January due to a strong rotation from growth to value type stocks, related to concerns over the prospect of interest rate hikes in 2022. However, the managers believe that the EV and battery industry has just entered the S-curve acceleration stage that will last for the next three to four years, just like we witnessed with smartphone penetration in the early 2010s. Therefore, they are willing to look more positively on EV and battery stocks when this correction occurs.

The conditions for EV adoption are ripe. First, pure battery EV manufacturing costs are already lower than that of traditional internal combustion engine (ICE) vehicles, due to massive reductions in the cost of lithium-iron-phosphate (LFP) battery technology. The cost of a battery pack at US$100 per kWh has reached an inflection point, and overtakes ICE’s manufacturing costs. Chinese battery makers such as BYD and CATL had already reached that sweet spot in 2020. Since then, most EV models have already boasted cost advantages, irrespective of subsidies and fuel efficiency gains. Secondly, the rising popularity of autonomous functions have also accelerated original equipment manufacturers’ (OEMs’) transition to EVs. OEM manufacturers have had to advance automated driving technologies which include robust light detection and ranging (LiDAR) systems to scan and measure distances, along with producing the chips required for automated driving systems.

In 2021, China’s new energy vehicle (NEV) sales topped 3.1 million units, with further expectations the figure will grow to more than 4.5 million year on year, implying a growth rate of 45%.3 Taking reference from Norway, where EV penetration has increased 10% almost every year over the last 5-6 years, the managers also expect the same thing to occur in China and Europe over the coming years.4 It is largely expected that companies such as Tesla and XPeng will become beneficiaries of this growth, given both companies’ market share.

China has ramped up its efforts to incentivize its domestic semiconductor industry. In the past, it injected 650 billion yuan into the industry, prompting semiconductor players to build out a supply chain that includes a combination of fabless, foundry and integrated device manufacturing companies. The managers maintain a constructive view on this sector and expect secular and structural elements to continue to support growth.

Software and Biotechnology Firms Have Room to Run

Mass advancements in technology has accelerated growth in industries such as software and biotechnology. While the managers have seen some solid progression in both industries, challenges remain. Within the software industry, they have observed that firms aren’t as willing to invest in leading software or software as a service (Saas) than they were before. As such, leading companies in cybersecurity and cloud services like Sangfor Technologies have much more room to run. That said, these corporate investments can only be delayed for so long. They believe that demand for enterprise IT software and cloud will resume in future.

The biotechnology sector was also a detractor due to weak revenues, partially driven by heavy cuts to drug prices after several rounds of government-led drug purchases. While some investors seem to be caught up in the short-term impact, the managers largely expect the market to overcome this on the back of a positive pipeline of developments observed with several names. Overall, they expect both of these sectors to eventually recover and support China’s economy in 2022.

Many factors from the previous year that once spooked investors are considered far behind us. As we head into 2022, the managers consider the upcoming impact from the US interest rate hikes to be manageable for China. And, after the corrections in 2021, Chinese equities should continue to be attractively valued for investors. While KEJI’s portfolio managers largely expect the EV industry to continue its trajectory, challenges remain in certain sectors such as software and biotechnology. However, they have observed some solid growth in both of these industries and expect these sectors to recover in the near term.