The sight of charging stations for electric vehicles (EVs) in parking lots and on the streets in major cities no longer seems abnormal. Consumer awareness of and appetite for EVs is higher than ever, boosted recently by sky-high gas prices wrought by the global economy’s historical dependence on petro dictators like Russia. For adoption to accelerate and for emission targets to be achieved, supply must catch up with demand, a process made more challenging by supply chain bottlenecks. But we view this mismatch as transient, as EVs are core to the world’s energy transition.

For investors, it’s key to understand that EVs do not live in isolation in an investment portfolio. The EVs, and eventually the autonomous vehicles (AVs), that drivers climb into are only part of the story. EV/AVs and Lithium & Battery Technology, the two investment themes comprising the Mobility mega theme, intersect with numerous themes that will continue to rewrite how the world and markets move.

Demand for EVs Heats Up, But Supply a Near-Term Question Mark

A recent survey revealed that 7 out of 10 U.S. drivers would be interested in buying an EV when charging infrastructure expands and EV costs drop.3 Sales numbers in the first half of 2022 reflect this interest. According to a Bloomberg analysis, the U.S. along with Europe and China crossed a key tipping point in the first half of 2022: more than 5% of new cars sold were electric. The 5% threshold is key, as based on the 18 countries that passed it previously, it implies that 25% of new cars sold could be electric by 2025.4 During Q2, EV sales in the U.S. jumped to over 440,000, a nearly 13% increase from a year ago.5 Consumers have more options than ever.

It’s likely that the push into EVs would have pressured production in certain areas anyway. But the pandemic took it to another level, from supply constraints to worker shortages and shipping delays. Lithium offers a prime example. While the planet has plenty of lithium, getting it battery-ready doesn’t happen overnight. It takes time to extract it from brine pools and underground reserves, and current mining operations, slowed by the pandemic, aren’t sufficient. As a result, as of May 2022, the global average price of lithium was up 432% year-over-year.6

Limited supply of lithium, and other EV components, coupled with inflation has led to a surge in average EV prices. In June, the average price of an EV hit $66,000, an increase of more than 13% this year.7 For now, many EV consumers appear willing to pay a premium to save money on gas over the long term, though the price elasticity of demand will eventually impact demand. It will take time, but we expect supply-demand issues to wane and battery costs to fall. Global X Research estimates that battery costs could be cut in half by 2030, helping EVs to become cheaper than internal combustion engine (ICE) vehicles in roughly five years.8,9

Cost is critical to EV adoption, but the importance of EVs goes far beyond temporary supply chain issues. EVs are key to fighting climate change, and countries like Norway offer a roadmap for mass adoption. In 2020, 75% of cars sold in Norway were electric.10 The country plans to sell its last ICE vehicle in 2025, a rapid transition sped up by aggressive policy, such as EV exemptions from a value added tax (VAT) and vehicle purchase taxes. The World Economic Forum believes these polices closed the price gap between EVs and ICE vehicles in Norway.11

U.S. Must Ramp Up EV Incentives and Investment in Charging Infrastructure

Limited EV incentive structures slowed EV adoption in the U.S. More aggressive policies are needed, but in the recently passed Inflation Reduction Act, lawmakers included the first new EV subsidies in federal legislation since 2009. As part of what’s being called the “single biggest investment in climate change in U.S. history,” the $375 billion bill extends the $7,500 consumer tax credit for new EVs and includes a $4,000 credit for used EVs.12 To qualify their vehicles for the extended credit, automakers must source 40% of battery components from U.S. factories or its free trade agreement partners; the batteries must be made in the U.S. by 2029; and EV components from China must be phased out starting in 2024.13

Charging infrastructure must be addressed as well. The number of public charging stations in the geographically expansive U.S. has more than tripled since 2015, but it has a long way to go. EV charging stations total roughly 48,000, with just 6,000 classed as DC Fast Chargers, compared to more than 150,000 gas stations.14 More DC Fast Chargers are essential, as less powerful options can take substantial time to recharge, increasing the perceived inconvenience.

As the first federally lead investment in charging infrastructure, the $7.5 billion in grant funding for a national network of charging stations in the Infrastructure Investment and Jobs Act was a positive development.15 It will not solve the charger shortage, but it could portend future funding. Also, the private sector appears ready to chip in. Auto OEMs like Ford, GM, and Tesla are taking steps to increase charging availability, in what GM said must be an “all hands on deck” approach. A McKinsey & Company report estimated that the U.S. needs 20 times more public charging stations than it has today.16

EVs Are Just One Piece of the Mobility Puzzle

The Mobility mega theme’s EV/AV and Lithium & Battery Technology themes comprise a crossroad for multiple disruptive themes, including Robotics & AI, the Internet of Things, and Cybersecurity.
It’s estimated that EVs could use up to 75% of all newly mined lithium by 2025.17 Improvements to lithium-ion technology may increase per battery lithium utilization. Currently, most batteries use lithium in the cathode component, while next-generation batteries will likely place lithium in the anode as well. Transitioning to a green energy economy will also require massive capacity of long-duration, grid-scale storage. Lithium-ion batteries are the most common battery storage option today, accounting for more than 90% of global grid battery storage.18

At the heart of modern-day vehicles is a digital brain powered by a specifically trained AI, the most advanced of which currently enables driver-assist features such as lane departure monitoring. Eventually, this technology could enable full self-driving capabilities. Using AI to compute billions of data points per second supplied from an array of sensors, cameras, and radar systems, AVs could effectively see the road and respond accordingly to changing conditions.

This array of connected sensors, cameras, and radar systems loops in the Internet of Things theme. By communicating with and integrating data from neighboring vehicles and even the roadways at large, AVs are expected to reduce accident rates, increase throughput, and decrease travel time. Also, connected, sensor-based EV charging stations could monitor the number of EVs en route for a recharge and reduce downtime by automatically scheduling charger maintenance.

Like other themes that rely on connectivity, cybersecurity is a risk in these increasingly computerized and connected vehicles, not the least of which is road safety. Personal data shared through their vehicles is another risk. To identify and mitigate these risks, cybersecurity investments from automobile OEMs are likely to increase.

Putting the Mobility Theme into a Portfolio

The Mobility theme is still in its early stages yet with enough companies in that have EV/AV exposure to have an ETF. Lithium and battery technology companies are further along the adoption curve than other pure play EV/AVs. We expect both themes to progress further into the Early Adopters phase where growth accelerates while remaining at a low absolute level. 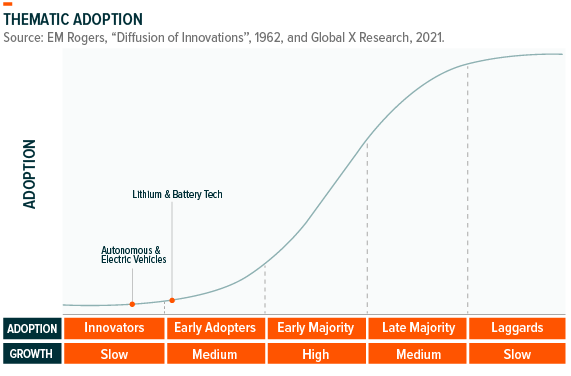 In our view, thematic equity should be targeted using screens to ensure the underlying companies provide the desired exposure. A goal should be to minimize overlap between themes while differentiating the exposure provided by the theme relative to broad beta products.

Mobility technologies could benefit as thematic adoption rises globally. The charts below break down the geographic exposure of the largest Mobility thematic ETF products. We believe there is ample innovation occurring outside of the U.S., and that limiting exposure to the U.S. may exclude key players to the detriment of investors over the long term. 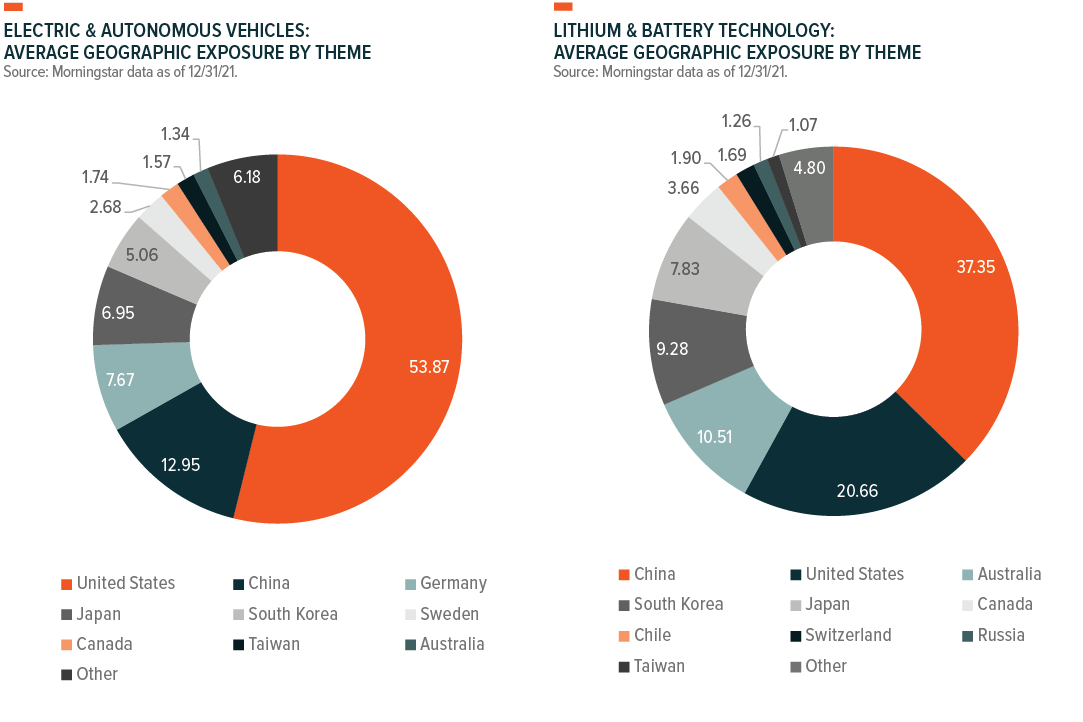 Note: Pie charts include the largest five electric and autonomous vehicles and all two lithium and battery technology ETFs according to our thematic classification. All Thematic ETFs weighted the same.

Conclusion: Mobility Is Set to Be Cleaner, Smarter, and More Investable

A car is one of the most tangible areas of technological advancement for the average consumer, helping to propel EVs from niche to mainstream. Sooner rather than later, we expect EVs to move from a luxury choice to an economical one, helped by public and private sector investments. Over the next decade, electrification and automation technologies may forever alter nearly all forms of transportation. For investors, the actual vehicle is but one consideration, as this next-generation form of mobility encompasses numerous investable themes built for the long term.