Getting Yield Out of Europe

Since the financial crisis, yields have remained at historic lows around the globe, but no region has experienced this quite as dramatically as Europe. With an economy stuck in perennial weakness, the European Central Bank (ECB) has taken a variety of measures to keep interest rates as low as possible to stimulate growth – so low that government bond yields from Berlin to Athens have sold at negative yields. While some have challenged the efficacy of these radical policies, the dynamic has undoubtedly impacted investors, particularly those in the region looking for income. In this post, we’ll discuss the following key topics:

How the ECB Drove Interest Rates to Zero

Following the depths of the financial crisis, central banks around the world elected to delve into uncharted waters, slashing interest rates to near zero levels. The ECB was no different, hoping to stimulate growth by making borrowing virtually free. 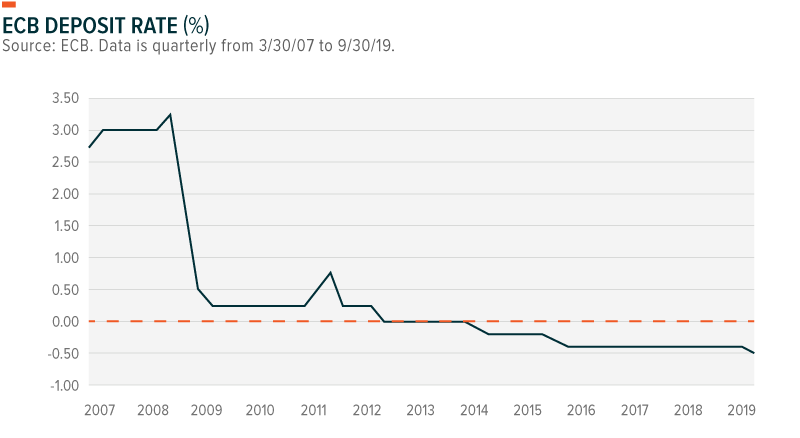 In addition to slashing rates, central banks became major liquidity providers through quantitative easing (QE) programs. While the US Federal Reserve began its QE programs shortly after the financial crisis in 2008, the ECB waited until early 2015 in response to their sovereign debt crisis. As investors lost faith in the ability of European periphery countries like Greece, Portugal, Spain, and Ireland to repay their debts, bond yields skyrocketed and the commercial banking system teetered on the edge of collapse.

In March 2015, the ECB began injecting massive amounts of liquidity into the system by purchasing a combination of public sector and private sector credit securities. They made €60 billion in monthly net purchases from March 2015 to March 2016, and increased that figure to €80 billion for the next twelve months, before slowly winding their asset purchase program. These purchases helped stabilize, and then drive down bond yields across Europe.

Between 2015 and 2018, the ECB accumulated over €2.6 trillion euros in asset purchases, attaining one of the world’s largest balance sheets. Today, the ECB’s balance sheet totals $5.1 trillion, only smaller than the Bank of Japan’s at $5.4 trillion and roughly equal in size to the People’s Bank of China.1 For context, the US Federal Reserve’s balance sheet peaked at $4.5 trillion at the end of 2014 and now sits at $3.9 trillion.2 Below, we can see the impact of the ECB’s program on both sovereigns like the German 10-year and corporate credit yields. 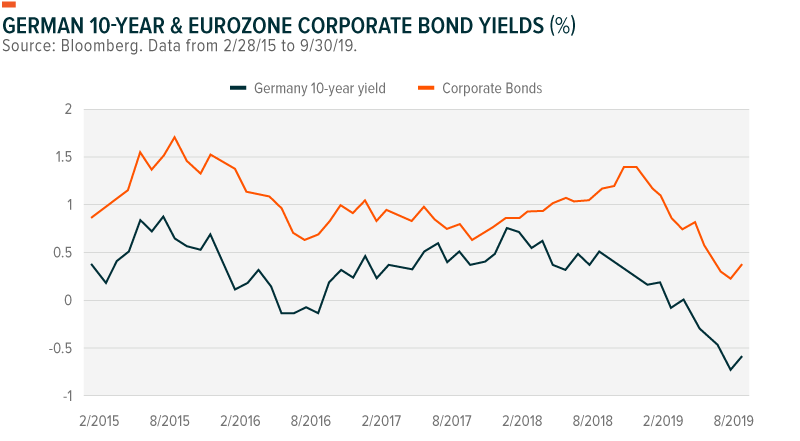 Despite the massive scale of the ECB’s bond buying program, the Eurozone remains in a slump. GDP growth in the Eurozone has stagnated below 2% for the last four quarters, after peaking at 3% in Q4 2017. Inflation remains well below the annual target level of 2% as deflationary pressures like aging demographics, government austerity programs, and business decisions to shift operations to lower cost countries have persisted. Despite improving lending numbers and signs of wage growth, manufacturing numbers, which are critical to Germany’s GDP, have been falling for the better part of the last two years. 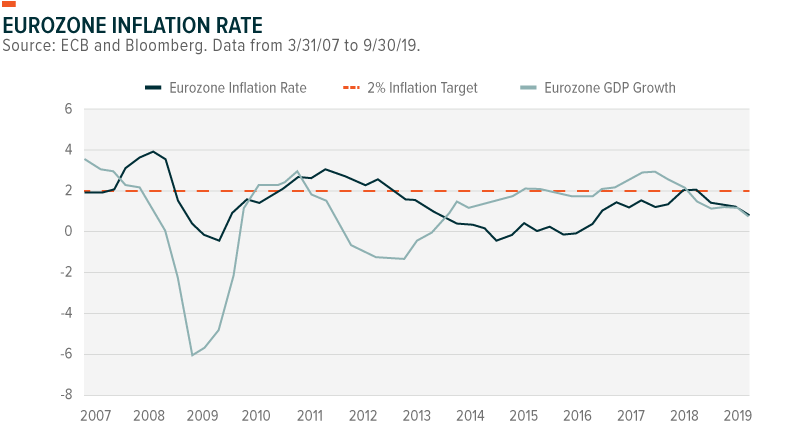 Trade wars, Brexit, and the beginning of a global economic slowdown have not helped. But with an expensive labor force and other central banks around the world cutting rates as well, there has been little relief from a depreciating euro currency. Unless inflation ticks up or German policymakers open their pockets for fiscal stimulus, it’s unlikely Eurozone GDP will experience additional growth. This likely will lead the ECB to drop short-term rates further into negative territory and use their balance sheet to continue to support asset prices. Just last month the ECB announced that it would be resuming its asset purchase program in November, starting at €20 billion a month for the foreseeable future.

Where Investors May Find Yield in the Region

Given these actions by the ECB, traditional sources of income like sovereigns and corporate bonds are paying little, if any, yield. After inflation, many are returning negative real yields.

For many investors, this presents a challenge. They may either continue to buy sovereign and corporate bonds with virtually guaranteed losses if held until maturity. Or, they can stretch into riskier parts of the credit spectrum, such as in the high yield bond space, to find additional yield. While the high yield segment has generally performed well this cycle, a multi-year rally makes valuations look inflated, leaving little upside potential. Credit investors may also be put off by the ECB’s extreme influence on the fixed income markets.

An overlooked source of yield for investors is in high dividend paying equities. In this space, yields remain well above other asset classes like sovereigns and corporates, while also exhibiting value characteristics, which could be a benefit if there is a surprise uptick in economic activity. European high dividend stocks are trading at a 15% discount to their 5 year average price-to-earnings (P/E), compared to an 11% discount on the broader MSCI Europe Index.3 The higher dividend yields along with lower valuations suggest European high dividend stocks could be an attractive total return play. 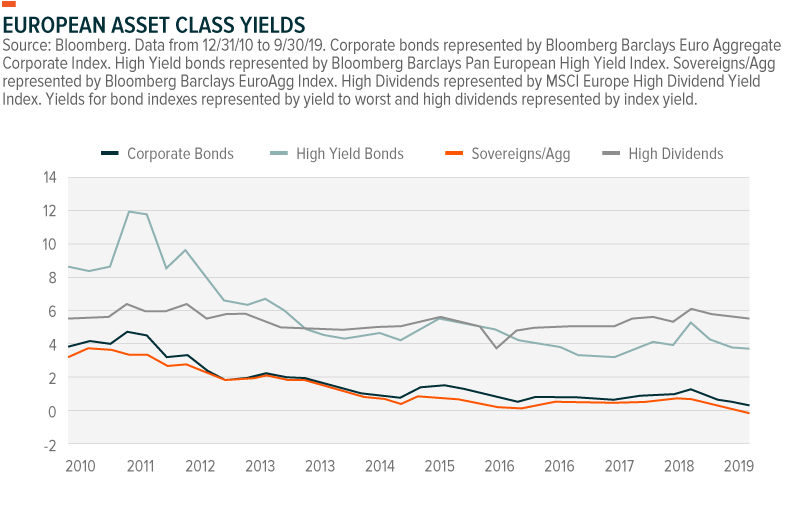 Investors are unlikely to see material yield from the fixed income space in Europe for the foreseeable future. With €20 billion in asset buying beginning in November, interest rates are poised to drop further, pulling yields deeper into negative territory. But high dividend equities, which are attractively valued given the muted performance and are offering relatively high yields, could be a viable alternative for both current income and potential price appreciation.

EFAS: The Global X MSCI SuperDividend EAFE ETF invests in 50 of the highest dividend yielding equity securities from the MSCI EAFE Index, which includes securities from international developed markets across Europe, Australasia, and the Far East.

Investing involves risk, including the possible loss of principal. International investments may involve risk of capital loss from unfavorable fluctuation in currency values, from differences in generally accepted accounting principles, or from economic or political instability in other nations. Emerging markets involve heightened risks related to the same factors as well as increased volatility and lower trading volume. High yielding stocks are often speculative, high-risk investments. These companies can be paying out more than they can support and may reduce their dividends or stop paying dividends at any time, which could have a material adverse effect on the stock price of these companies and the Fund’s performance.