Gold often comes into the limelight when there is heightened geopolitical risk because it is viewed as a store of value during volatile times. Yet the gold market and the various methods to access gold are quite nuanced. The following analysis seeks to shed light on gold by answering four key questions:

How does the gold supply chain work?

Gold is a rare element, with an average concentration of just 0.005 parts per million. In other words, just 1 gram of gold can be extracted from 250 tons of ordinary gravel.1 Given its scarcity, it is seldom found in concentrations that make extraction economically viable. In order to support a profitable mining project, gold explorers conduct geological surveys targeting concentration levels that are 1000 times higher than normal. After discovering  an ore, geologists and engineers will engage in a feasibility study to determine whether the project has economic value, prior to the commencement of any mining operations. They will also seek approvals from the appropriate governing bodies, including local governments and environmental agencies, to proceed with the mining project.

The next phase focuses on efficiently extracting gold from other natural materials in the mine. There are two processes for doing so: milling and amalgamation. Milling is a chemical process whereby the ore is ground into a fine powder and mixed with water to form a slurry. This slurry is then passed through a carbon-in-leach circuit, which attaches the gold particles to carbon, separating it from other materials.2 In amalgamation, gold ore is dissolved in mercury and then the mercury is distilled away.3 Once the gold is purified, it is smelted and pressed into gold bars to be sold in the market.

A more detailed look at the mining life cycle can be found in the chart below. 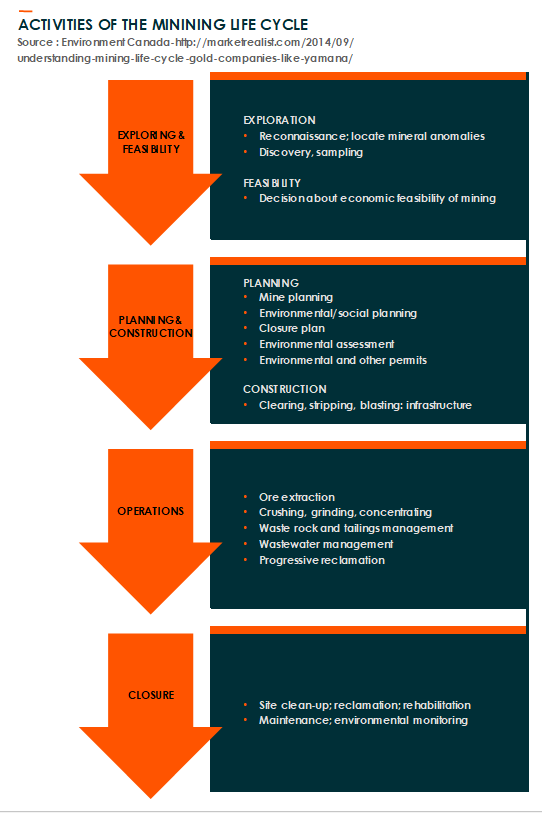 What are the main sources of demand for gold? 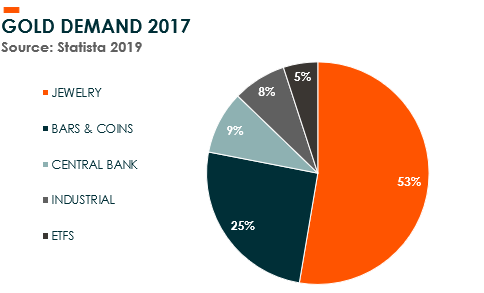 Jewelry: Until relatively recently, jewelry constituted the vast majority of all gold demand. To this day, gold jewelry remains one key source of demand for the precious metal.

Investing: Gold has gained popularity as an alternative asset class that can potentially hedge against inflation and geopolitical risks. Holding gold directly though physical ownership of bars and coins or indirectly through investment vehicles like ETFs and futures are popular ways of gaining exposure to gold.

Central Bank Reserves: Central banks are net buyers of gold. They often fill up their treasuries with gold bullion, which serves as a reserve. This circumstance is partly due to changes in banking regulations, which as a result of Basel III now classify gold as a tier I asset (a primary measure regulators use to evaluate a bank’s financial health).

Currency: Gold continues to be used as a form of non-fiat currency around the globe, particularly in underdeveloped economies which struggle with high inflation.

Industrial: Gold’s malleability, conductivity, and non-reactivity make it a useful component for a variety of applications, including personal electronics, medicine, and aeronautics, among other uses.4

What is the outlook for the supply and demand balance?

Some commodities, like oil, can demonstrate rapid changes in supply due to changes in spot prices. Gold production, however, has been relatively insensitive to changes in gold spot prices compared to other natural resources. This phenomenon is largely due to the geological challenges that prevent a rapid increase in production. For example, the gold mining industry already faces challenges with the depletion of existing mines and fewer new discoveries, which constrains supply growth. Additionally, increased government and environmental regulations, higher production costs, and falling ore quality, can constrain supply growth. Gold supply constraints have temporarily eased, and production is expected to increase through 2022, backed by higher gold prices and mine investments, boosted by stronger company financials. 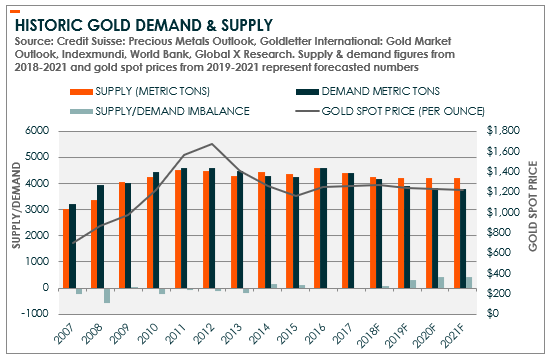 What are the key differences between the various ways to access gold?

There are a variety of methods for gaining exposure to gold, each of which has different characteristics with respect to its correlation to gold prices, fees, taxation, and liquidity. 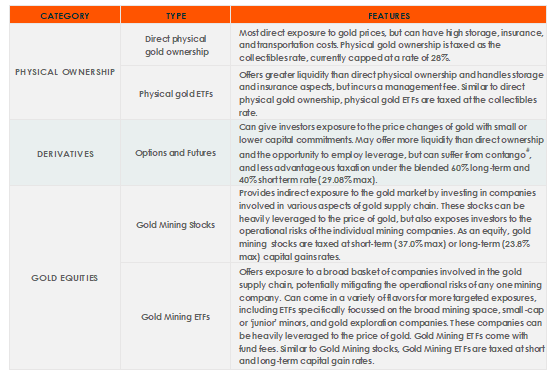 Gold mining companies are distinguished by their role in the supply chain and size.

Explorers begin operations at the earliest stage in the discovery process. These companies look to evaluate potential exploration projects, electing to use their expertise and scientific due diligence processes to strategically purchase assets. Often, explorers may have the rights to only a handful of projects. Once gold has been discovered, explorers can elect to engage in M&A activity with a mining company or undergo the mining phase themselves. These companies’ economic success are often tied to their ability to successfully find economically feasible gold ores as well as changing prices in gold. Companies that explore are sometimes equated with venture capital in that investments in gold exploration companies are early stage, high risk, with high potential reward.

Junior Miners are smaller-sized companies that can be involved in a variety of stages of the gold cycle, including exploration, development, or mining. They are primarily defined by their size, which can make these companies more nimble and more able to pursue smaller opportunities that are overlooked by larger mining firms. These smaller firms can also have higher risks than larger mining companies, as smaller firms tend to have less efficient operations, less access to capital, and fewer mining projects in their portfolios.

Larger mining firms tend to own a variety of gold projects around the world and have greater access to the capital markets through debt and equity issuances. While these firms can sometimes lower their costs through economies of scale and operational efficiency, they tend to be dependent on acquisitions of new mining projects to grow their production. Therefore, these firms ultimately depend on explorers and junior miners to grow.

# Contango is when the spot price of a commodity trades below its future price.

This information is not intended to be individual or personalized investment or tax advice. Please consult a financial advisor or tax professional for more information regarding your situation. Shares of ETFs are bought and sold at market price (not NAV) and are not individually redeemed from the Fund. Brokerage commissions will reduce returns.

Investing involves risk, including the possible loss of principal. International investments may involve risk of capital loss from unfavorable fluctuation in currency values, from differences in generally accepted accounting principles, or from economic or political instability in other nations. Emerging markets involve heightened risks related to the same factors as well as increased volatility and lower trading volume. Narrowly focused investments may be subject to higher volatility. There are additional risks associated with investing in gold and the gold mining industry.