Guru’s Technology stocks performed well from the Q2 rebalance on May 25th to the Q3 rebalance on August 24th.  They gained 10% on a strong earnings season and improved growth expectations.1 85% of Technology companies in the S&P 500 beat earnings expectations in Q2, by an average of 7.2%.2 Analysts also underestimated revenues for the Tech sector, with these companies reporting 1.8% higher sales than consensus estimates.2  The Tech sector made up approximately 25% of Guru’s portfolio, a 5% overweight versus the S&P 500, yet these holdings contributed 50% of the fund’s returns during this period.1

Guru’s Pharmaceuticals holdings rebounded 9% after a sharp selloff of nearly -55% from August 2015 through April 2016.1 The rebound is partly due to the normalization in pharmaceuticals valuations after regulatory concerns drove down share prices.  In May 2016, Pharma companies traded at a Price to Earnings (P/E) ratio less than a third of July 2015’s figure.3

Guru’s latest rebalance on August 25th saw the removal of 3 of the fund’s 47 components and the addition of 6 new holdings.

This quarterly turnover of 6% is much lower than historical averages, possibly indicating deeper conviction and longer holding periods for major hedge fund investments.

Cyclical sectors like Consumer Discretionary continued to stay in favor, with Guru maintaining a 9.66% overweight versus the S&P 500, while shying away from Defensive sectors like Health Care and Consumer Staples, which were underweight 4.73% and 4.10%, respectively.4  The fund also increased its allocation to Large Caps for the second consecutive quarter, rising to 70% of the fund’s portfolio. 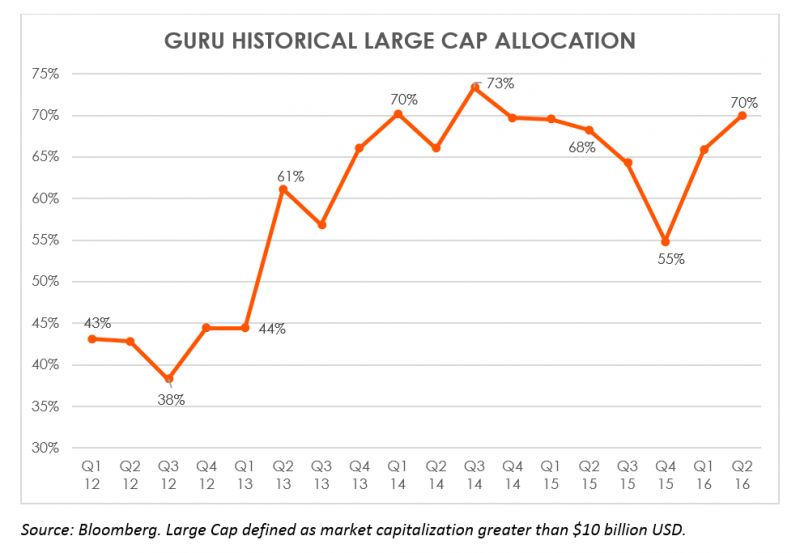 The S&P 500 is an index of 500 stocks chosen by factors such as market size, liquidity and industry grouping. The Index is designed to be a leading indicator of U.S. equities and is meant to reflect the risk/return characteristics of the large-cap universe.

The Solactive Guru Index is comprised of the top U.S. listed equity positions reported on Form 13F by a select group of entities that Solactive AG characterizes as hedge funds.

Price to Earnings (P/E) is defined as the price of a security divided by its Net Income per share, or earnings per share.

Shares are bought and sold at market price (not NAV) and are not individually redeemed from the Fund. Brokerage commissions will reduce returns. Global X NAVs are calculated using prices as of 4:00 PM Eastern Time. The market price is the Mid-Point between the Bid and Ask price as of the close of exchange.