Why There’s Insatiable Demand for US Infrastructure

The United States hasn’t seen a major infrastructure package since the Eisenhower administration. As a result, much of US infrastructure, from highways to waste treatment facilities and energy grids, has approached the end of its useful life and is in desperate need of upgrading.  While investment has historically been complicated by lack of federal commitment, a closer view of America’s infrastructure offers a more optimistic outlook.

First, it’s useful to categorize US infrastructure into two broad categories: transportation and utilities. The former includes mass transit and rail, streets and highways, seaports, airports and even forthcoming, revolutionary transportation systems that will enable use of autonomous vehicles, the hyperloop and more. The latter refers to key services like power, water, waste and broadband or fiber.

Figure 1 below outlines several ongoing, strategic US infrastructure investments in 2019.1 Examples include privately funded high-speed rail lines in Central Texas, from Dallas to Houston, and the Southwest, from Las Vegas to Southern California. On the utilities side, major projects include the Detroit Capital Improvement Program for water and wastewater management and the Hell’s Kitchen Lithium & Geothermal Project, which plans to harness geothermal energy for Lithium battery production.2 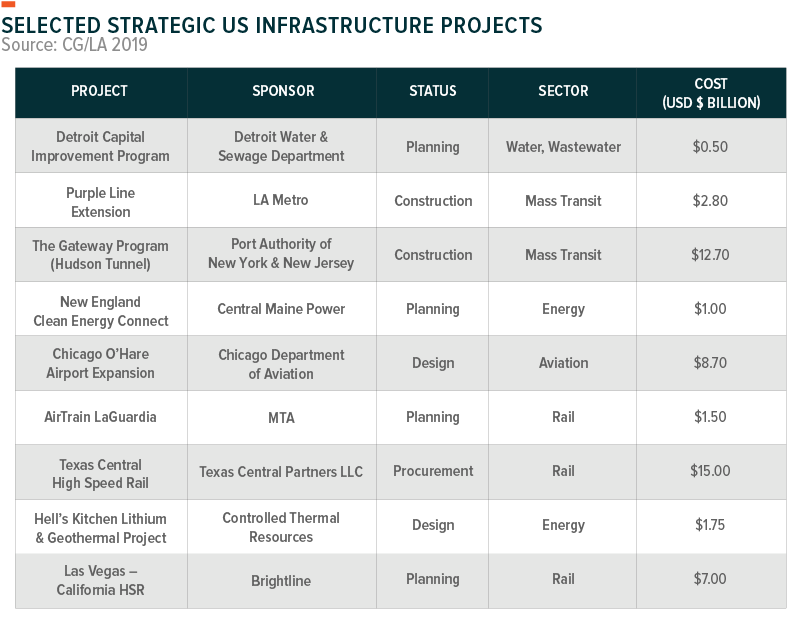 Importantly, private sector infrastructure financing, as well as leadership from states and local municipalities, have contributed significantly to recent investment. Political gridlock at the federal level should still, however, be evaluated as a short-term obstacle given that widespread support for infrastructure exists across the political spectrum. The current administration and nearly all 2020 presidential candidates appear supportive of a major US infrastructure package. Business interest in infrastructure investment is similarly high given its potential to boost economic productivity and growth. Indeed, despite partisan bickering, the 2020 federal budget is expected to include at least $200bn for infrastructure, as an early stage bid for the long-dreamed of trillion-dollar deal.3

Drivers of US infrastructure demand

1. Population growth, urbanization and globalization: This trifecta of demographic trends has already and should continue to pressure US infrastructure capacity. The population is expected to grow to more than 400 million in 2060 up from 327 million today.4 This growth, alongside the trend of younger generations moving to cities, is expected to persist, lifting demand for the construction of urban transportation systems and utilities services. That same infrastructure must also accommodate the ever-increasing complexity of global trade flows. US exports accounted for 12% of GDP in 2016, up from under 5% in 1960, or the last time there was a major federal infrastructure investment in the US.5 To further illustrate the impact of globalization on infrastructure and its relevancy for the US economy, one might simply look at the Port of Los Angeles, which alone processed a cargo value of $284 billion in 2017 and currently accounts for 1 out of every 13 jobs in the city of LA.6 The recent boom in crude and liquefied natural gas (LNG) is expected to make the US a net energy exporter by 2020, which hasn’t been true for almost 70 years, and further demonstrates continued US embeddedness in global trade flows.7

2. Depreciation of current assets: In its 2017 Infrastructure report card, The American Society of Civil Engineers (ASCE) gave the US a D+, estimating a more than $2 trillion funding gap between needs and expected government spending over the next decade.8 Figure 2 below identifies the backlog for several transportation and water management market segments. Price tags for backlogged, core maintenance, repair and improvement services reach as high as $360 billion for highways and $472 billion to guarantee the delivery of safe drinking water, with an additional $30 billion dedicated strictly to replacing lead drinking water services lines.9 Much of the backlog stems from the mere fact that government spending has not kept pace with real GDP growth and demographic pressures. Yet the useful life of many infrastructure assets can only be stretched so thin, though growing local and private sector investment in large infrastructure initiatives should help make up for lagging government support. For example, the federal gas tax used to fund road and highway improvements hasn’t been increased since 1993, but 29 states have passed legislation to raise their gas taxes to fund infrastructure projects just since 2013.10 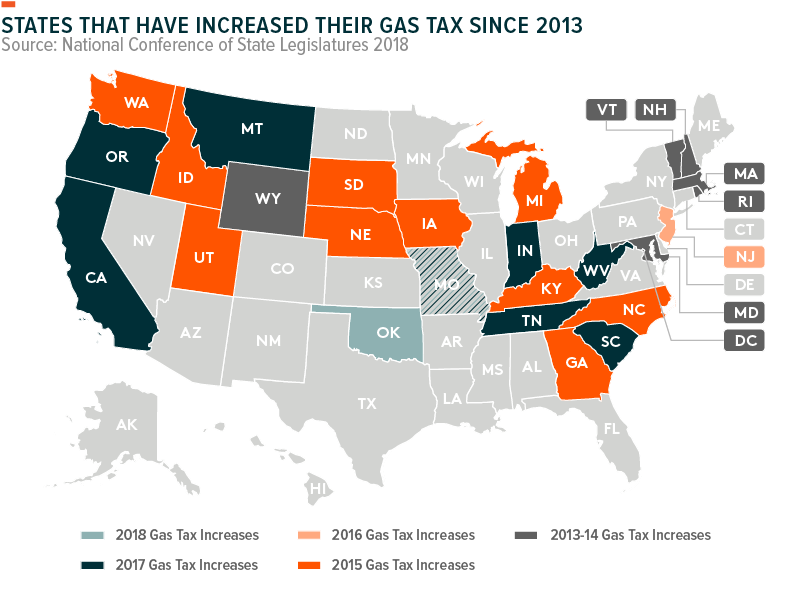 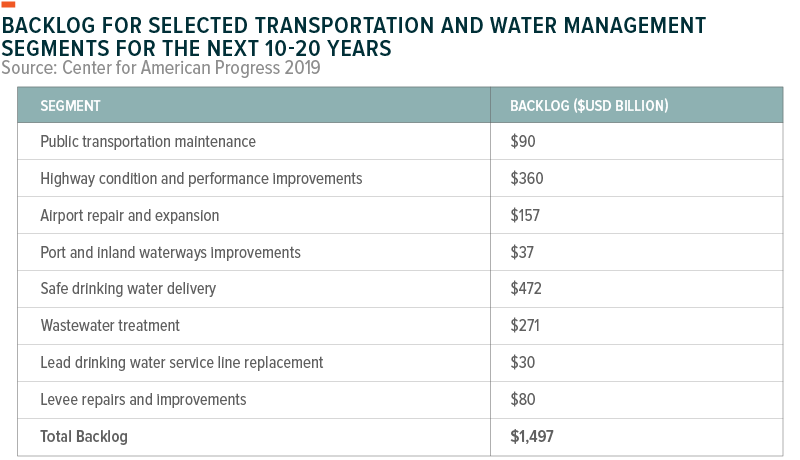 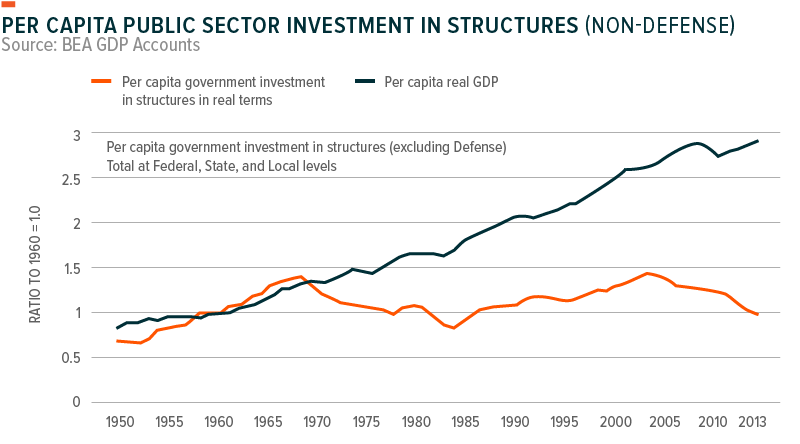 3. Climate risk mitigation and natural disaster recovery: Concerns of climate change and the rising frequency of natural disasters are likely to stimulate the need for continued infrastructure investment. The anticipated impact of climate change, even without its worst effects, includes reductions in the availability of fresh water, risks to real estate and transport systems from flooding and rising sea levels, damages to energy grids from rising temperatures, and much more.11 The latest government-sponsored National Climate Assessment noted that inland flooding from increased rainfall could cause between $1.2-$1.4bn in annual damage just to bridges.12 Recent incidents have already demonstrated the potential for climate-related shocks to infrastructure. Hurricane Sandy caused 8.7 million customers to lose power, prompting New York and New Jersey utilities companies to spend billions on upgrades to prevent future extreme weather-related disasters, from installing submersible equipment to redesigning underground electricity networks.13 And after Hurricane Harvey, voters in Harris County, Texas overwhelmingly approved a $2.5bn infrastructure bond to protect Houston from future incidents.14 Indeed, the cumulative cost of the 241 natural disaster related events that caused at least $1 billion in damage in the US from 1980-2018 is more than $1.6 trillion. Growing public concern for the impact and increasing frequency of such disasters should thus continue to stimulate preventative, and unfortunately also reactive, infrastructure upgrades nation-wide. 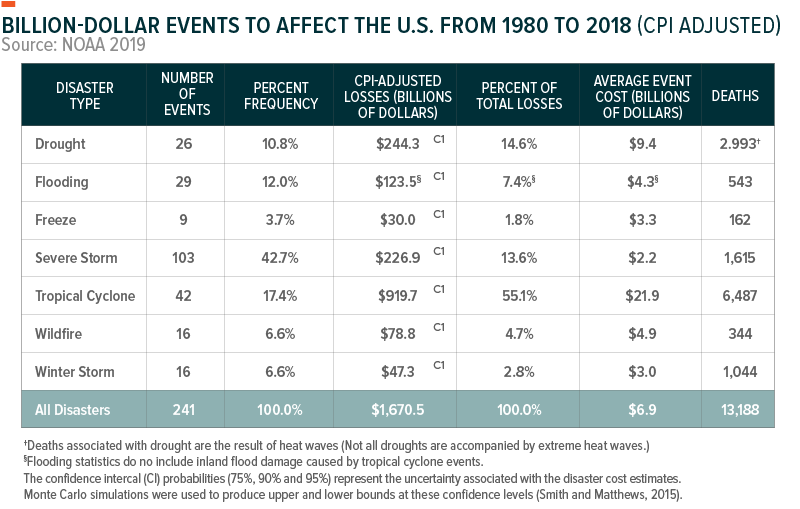 4. Changing preferences and behaviors: Younger generations, especially oft-cited Millennials, have different expectations for infrastructure than older citizens. Indeed, some research has called Millennials ‘the multi-modal generation’ for their relatively higher use of and interest in alternative modes of travel.15 Support for mass transit and public transport is often as much as 10% higher among Millennials than Baby Boomers.16 Such differences can be attributed to increasing urban living among Millennials, generational wealth differences that have limited car ownership, and even values-driven explanations such as environmental and/or social consciousness. Similar studies note that Millennials are more likely than any other age bracket to seriously take a company’s environmental impact and sustainability into account when making a purchase, and as many as 75% are even willing to pay a premium for sustainable offerings.17 Many well-known brands like Apple and Google have already shifted their supply chains to renewable energy in recognition of such trends. And when considering their own energy usage, Millennials plan to monitor their consumption more closely and hope to adopt new energy products and services, including renewable sources like solar and wind.18 Changing generational preferences should have substantial influence over future decisions to not only modernize America’s transportation systems and utilities but also incentivize their use.

5. Technology: Innovations in technology, from super-sized container ships to smarter air traffic control systems, have a two-fold effect on infrastructure that can precipitate growth. On the one hand, disruptive innovations demand investment to upgrade or replace existing systems and structures; on the other, they can help create new efficiencies that flow through to the bottom line. The Port of New York and New Jersey, for instance, has spent hundreds of millions of dollars on upgrading its terminals to accommodate high-volume cargo mega ships.19 Additionally, the World Economic Forum estimates that blockchain, or distributed ledger technology, could generate an additional $1 trillion in global trade flows by eliminating paper-based record keeping and communications.20 Yet these innovations are perhaps only the tip of the iceberg for smart infrastructure. Advances in artificial intelligence, the Internet of Things and autonomous vehicles (AVs), to name a few, are expected to fundamentally change how infrastructure is engineered and managed. Highways, bridges, streets and traffic lights may soon simultaneously be required to connect to one another, as well as fleets of AVs, to optimize traffic routing and ensure safety. Increasing connectivity, propelled by ongoing shift to 5G, should further fuel the push for smarter infrastructure.

Together, these trends should ultimately benefit companies that can derive added revenues from increased spending on infrastructure projects, regardless of the financing method and objective, such as maintenance or new developments, and can collect infrastructure-related revenues before project completion. Such companies include:

20. Bloomberg. “Blockchain is about to Revolutionize the Shipping Industry.” Apr 18, 2018.

Carefully consider the Fund’s investment objectives, risks, and charges and expenses before investing. This and other information can be found in the Fund’s summary or full prospectuses which can be obtained by calling 1-888-GX-FUND-1 (1.888.493.8631), or by visiting globalxfunds.com. Please read the prospectus carefully before investing.