The Movement to Rebuild America’s Infrastructure

On March 8th, 2017, we launched the Global X U.S. Infrastructure Development ETF (PAVE), which invests in companies that potentially stand to benefit from an increase in infrastructure projects in the United States. Such an increase could be driven by the introduction of fiscal spending bills or tax incentives to stimulate the undertaking of new projects, increases in private investment given additional profitable opportunities, or streamlined regulations that fast-track the approval process for infrastructure projects.

In this piece, we will answer four key questions:

How Important Is Infrastructure to Economic Growth?

Infrastructure includes highways, streets, rail, transit, airports, seaports, waterways, waste management, power grids, communications equipment, and pipelines. Infrastructure is the backbone to any economy as it facilitates the movement of goods and labor, which allows for greater competition, higher productivity, and reduced costs. Therefore, many economists believe that increases in public or private spending on infrastructure development can significantly boost economic growth. According to research from S&P, a 1% increase in US infrastructure spending as a percentage of GDP translates to a 1.7% increase in GDP over the next three years, or a 70% return on investment.1

What Is the Current State of the US’s Infrastructure?

The US’s infrastructure, which was largely built in the post-WWII period of the 20th century, is rapidly aging, while suffering from a shortage of funding required to maintain these assets. While spending on infrastructure construction has nominally increased at an annualized rate of 3.6% over the last 15 years, it has actually decreased at an annualized rate of -0.2% once controlling for inflation and real GDP growth. These numbers tell an even more troubling story when broken into various segments of infrastructure.  In the chart below, note that the Power segment, which includes electric power generation & distribution and the storage and transportation of oil and natural gas, is the only category demonstrating real construction spending growth relative to GDP.

As a result of this low level of investment in infrastructure maintenance and development, the US’s infrastructure assets are deteriorating and in dire need of repair: The American Society of Civil Engineers (ASCE) gave America’s infrastructure a D+ on its quadrennial ‘Report Card’, noting that neglecting infrastructure can have severe negative economic consequences for the country. ASCE believes that a failure to address the nation’s infrastructure needs could result in a loss of $4 trillion of GDP and 2.5 million jobs by 2025.2

The amount of investment needed to rebuild and expand the nation’s infrastructure is huge. ASCE believes that the country will need to spend $3.3 trillion on infrastructure from 2016 to 2025, and nearly $10.8 trillion by 2040.3 Yet nearly half of these requirements are currently unfunded, necessitating significant increases in investments from public and private sources. 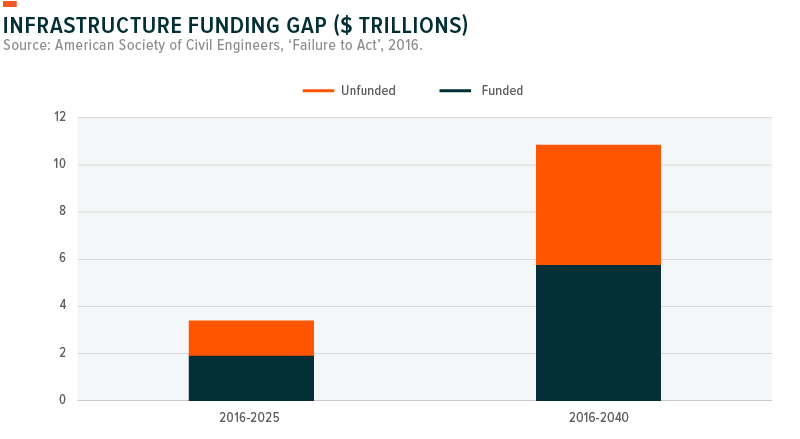 What Are Some Potential Approaches to Stimulate Infrastructure Development?

There are several potential methods to stimulate increased infrastructure development.  A few examples are:

At a federal level:

How does PAVE Approach Infrastructure Investing?

1. Source: S&P, ‘Global Infrastructure Investment: Timing is Everything (And Now is the Time)’, 2015.

The S&P Global Infrastructure Index is designed to track 75 companies from around the world chosen to represent the listed infrastructure industry while maintaining liquidity and tradability.

Investing involves risk, including the possible loss of principal. Investments in securities of companies in the industrials sector are subject to fluctuations in supply and demand for their specific product or service. The products of manufacturing companies may face product obsolescence due to rapid technological developments. Government regulation, world events and economic conditions affect the performance of companies in the industrials and materials sectors. Investments in securities of companies in the materials sector are subject to changes in commodity prices, exchange rates, import controls and worldwide competition. The Fund is non-diversified.

Shares are bought and sold at market price (not NAV) and are not individually redeemed from the fund. Market price returns are based upon the midpoint of the bid/ask spread at the close of the exchange and do not represent the returns an investor would receive if shares were traded at other times. Brokerage commissions will reduce returns. NAVs are calculated using prices as of 4:00pm ET.

Carefully consider the fund’s investment objectives, risk factors, charges, and expenses before investing. This and additional information can be found in the fund’s full or summary prospectus, which may be obtained by calling 1-888-GX-FUND-1 (1.888.493.8631), or by visiting globalxfunds.com. Read the prospectus carefully before investing.