From 2014 to 2015, over $5 billion flowed into ETFs that provide exposure to Japanese equities while seeking to hedge the currency risk of fluctuating exchange rates between the Japanese yen (JPY) and US dollar (USD)1. Many investors were drawn to these strategies because of the possibility of significantly outperforming unhedged benchmarks, which would suffer from a depreciation of the yen versus the dollar. Currency hedged strategies have also been utilized as a method of reducing portfolio risk because removing exposure to currency movements can decrease the volatility of a portfolio.

We believe that decisions between hedging or not hedging currency exposure can be a source of alpha for more tactical investors. For long term strategic investors, however, currency movements are cyclical and not expected to generate returns. Therefore, long term outperformance should be sought from systematic sources of return premiums, such as persistent factors with strong academic consensus. 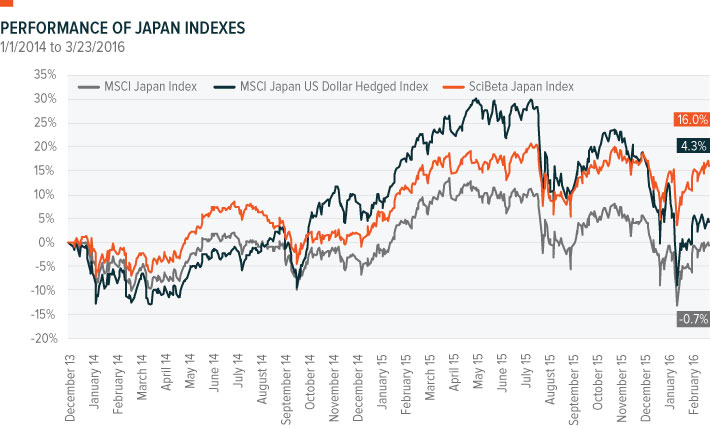 From 2014 to June 2015, the currency hedged MSCI Japan US Dollar Hedged Index outperformed the MSCI Japan Index by nearly 20%, due to strong depreciation of the yen. Over this time, the hedged benchmark index experienced returns of 30.1%, while the unhedged benchmark was up only 11.1%.

Since June 2015, however, the yen has reversed course and appreciated versus the dollar, which has narrowed the gap between the hedged and unhedged benchmarks amid a broader selloff of Japanese equities. From June 2015 to present, the MSCI Japan US Dollar Hedged Index is down -19.8%, while the MSCI Japan Index is down -11.6%, an 8% difference.

Overall, the hedged approach has outperformed the unhedged benchmark (4.3% vs. -0.7%) as the yen has ultimately depreciated since the beginning of 2014. However, the two distinct periods of strong outperformance and underperformance versus the MSCI Japan Index demonstrate the high potential for differences in returns between hedged and unhedged indexes. 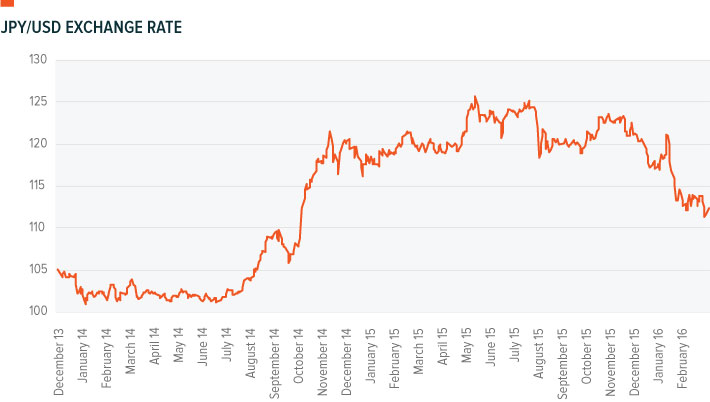 Scientific Beta Japan Multi-Beta Multi-Strategy ERC Index (“SciBeta Japan”): a multi-factor index that seeks to outperform a cap weighted benchmark such as the MSCI Japan Index, with similar or lower risk. The index does not hedge currency exposures.

Much of this performance is attributable to the strategy’s exposure to historically well rewarded factors such as Size (mid cap stocks), Momentum, Value and Low Volatility. In particular, since 2014, mid cap stocks and low volatility stocks have performed very well in Japan, boosting returns for strategies with exposures to these stocks.  Traditional market cap weighted benchmarks such as the MSCI Japan Index tilt much of their exposure towards large caps and growth stocks. While growth stocks have recently outperformed their value counterparts, large caps have significantly underperformed mid caps, which has hindered the performance of the MSCI Japan Index3. 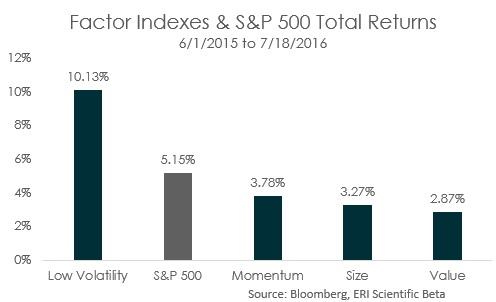 MSCI Japan US Dollar Hedged Index
Currency hedging is often framed within the context of portfolio risk. Currency risk can increase the volatility of an investment and is ultimately not rewarded over the long run. Therefore, investors who want to remove this risk will seek to mitigate it.

Buying Japanese stocks and hedging the currency exposure, however, has not reduced volatility, as the hedged MSCI Japan Index ultimately demonstrated higher realized volatility than the unhedged version since 2014. How did this happen? The JPY to USD exchange rate has exhibited a -0.38 correlation with the performance of the MSCI Japan Index in local JPY terms.  Because of this negative correlation between Japanese stocks and the currency movements, maintaining exposure to the yen has had a positive diversification effect on the overall investment. A hedged approach removes this element of diversification, which results in higher volatility. 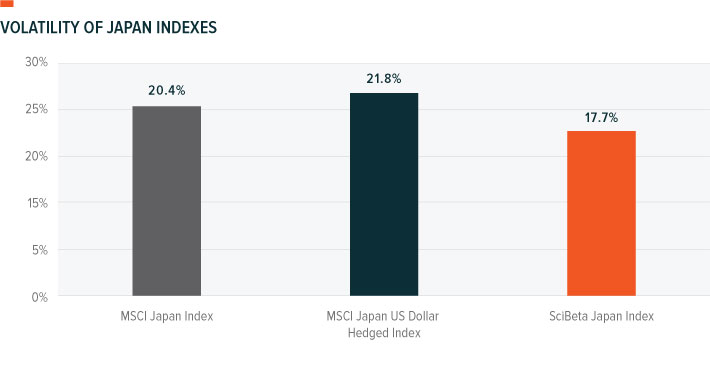 The theory as to why the Japanese market has had a negative correlation with the currency is that much of the exposure in a market cap weighted index, like the MSCI Japan Index, is concentrated in large export-focused companies like Toyota and Mitsubishi. These companies become more competitive as the yen gets cheaper, so as the yen depreciates, their earnings rise. This relationship also explains some of the recent outperformance of mid caps over large caps, which has enhanced the performance of the SciBeta Japan Index. Mid cap companies tend to be more domestically focused than the export-oriented large cap stocks and therefore they have been hurt less by the recent appreciation of the yen.

Scientific Beta Japan Multi-Beta Multi-Strategy ERC Index
Scientific Beta’s approach to risk is to mitigate the concentration risks that plague market cap weighted indexes, the factor risk of investing in a single-factor strategy, and model-specific risks of alternative weighting schemes4. This multi-layered approach to diversification has produced lower volatility than both hedged and unhedged versions of MSCI’s Japan Index, as well as lower drawdowns. Further, the strategy has benefitted from an average allocation of 19% towards low volatility stocks, which by nature, tend to have less volatility and lower drawdowns than the broad market. 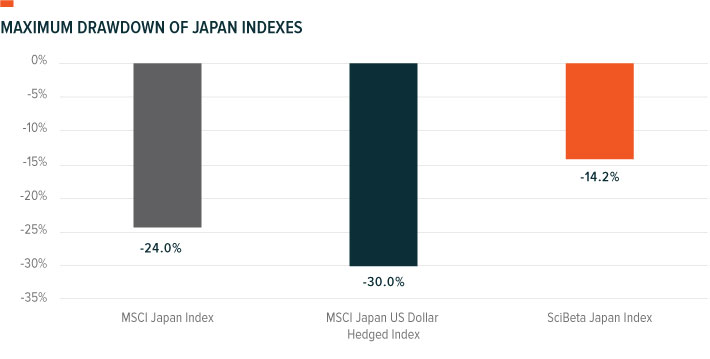 Since 2014, Scientific Beta’s multi-factor approach to Japan has resulted in better performance, lower volatility, and lower drawdowns than both the hedged and unhedged versions of the MSCI Japan Index. While hedging yen exposure worked spectacularly through mid-2015, the currency has ultimately reversed course and eliminated much of the strategy’s outperformance versus the unhedged benchmark. Further, hedging the yen resulted in higher volatility and greater drawdowns due to the negative correlation between the yen and the Japanese large cap stocks.

We believe that decisions between hedging or not hedging currency exposure can be a source of alpha5 for more tactical investors. For long term strategic investors, however, currency movements are cyclical and not expected to generate returns. Therefore, long term outperformance should be sought from systematic sources of return premiums, such as persistent factors with strong academic consensus.

2. The MSCI Japan Index is designed to measure the performance of the large and mid cap segments of the Japanese market. With 318 constituents, the index covers approximately 85% of the free float-adjusted market capitalization in Japan.

3. Over the long term, academics have observed that value stocks tend to outperform growth stocks. In shorter time frames however, value stocks can experience periods of underperformance.

4. Model risks include assumption risk and estimate risk. Assumption risk is the risk of assuming something to be equal across all stocks. For example, in an equal-weight index, the strategy assumes equal levels of volatility and correlations across stocks, and therefore does not seek to improve diversification by tilting exposures towards less correlated stocks. Estimate risk is the result of basing a weighting scheme on historical estimates. Minimum volatility weighting schemes suffer from this risk as they base their weightings on historical volatilities and correlations across stocks, which may not persist in the future.

5. Alpha: outperformance versus a benchmark index.

Past Performance does not guarantee future results. Indices are unmanaged and do not include the effect of fees. One cannot invest directly in an index. Index performance is not representative of fund performance.

Carefully consider the Funds’ investment objectives, risk factors, charges and expenses before investing. This and additional information can be found in the Funds’ summary or full prospectus, which may be obtained by calling 1-888-GX-FUND-1 (1.888.493.8631), or by visiting www.globalxetfs.com. Read the prospectus carefully before investing.