In June, macro events were responsible for some of the largest moves in risk assets markets have seen in some time. And when we say macro events, we’re talking about interest rates. Many developed economies adjusted their monetary policy to try and slow down the rampant inflation occurring across the globe. The U.S. Federal Reserve increased rates by 0.75%, and the Bank of England, the Australian Reserve Bank and the Bank of Canada all hiked by 0.50%. Central banks in Chile, South Korea, and Brazil also hiked rates.

These central bank moves were not coordinated, but many of them face the exact same challenge of runaway inflation from supply chain issues due to 21st century globalization and their rolling off quantitative easing (QE) policies. Bond and money markets seem to expect this tightening trend to continue, at least until inflation starts to show signs of decelerating.

With investors keeping one eye on market volatility and the other on inflation, we see compelling opportunities for those with a longer-term view to position their portfolios for when markets normalize.

The fall of the algorithmic stablecoin UST in June had a broad contagion effect across the crypto ecosystem. The most prominent of these events may have been Celsius’ drop. A centralized lending and borrowing company, Celsius was among some of the major financial institutions that used the Anchor Protocol, a decentralized finance (DeFi) lending and borrowing app that issued 20% annual yields on UST. Celsius used this protocol, as well as leveraged DeFi yield farming strategies, in an attempt to maximize returns for clients. Celsius later suspended withdrawals and transfers from their accounts due to liquidity deficits.

Three Arrows Capital (3AC), a well-known crypto hedge fund, was also affected by the LUNA/UST slump, given the $200 million it had locked in LUNA. In addition, 3AC borrowed from major centralized and decentralized lenders to add leverage to their positions and could not meet margin calls, leading to liquidations. Forced selling from Celsius and 3AC to meet their debt caused significant selling pressure.

The crypto space may continue to face pressure amid challenging macroeconomic conditions, especially when considering companies like Celsius and Three Arrows Capital still haven’t fully paid off debts. However, crypto’s fundamentals have never been more robust, and our long-term outlook for the space remains positive. We expect institutions to take a more thorough approach to risk management moving forward, perhaps eventually aided by new regulations that can help ensure longer-term stability. Also, consolidation is not uncommon during the early development stages of a growing sector.

Importantly, the technology continues to evolve, and the adoption of crypto payments continues to increase with companies like Vueling, Chipotle, and Balenciaga the latest to accept crypto as payment. Major upcoming catalysts include Ethereum’s transition from proof-of-work to proof-of-stake, scheduled to occur in August. Proof-of-stake will reduce Ethereum’s energy consumption by more than 200-fold and sharply reduce ETH’s inflation rate.

Energy Crisis: Summer Travel in the Crosshairs, But a Potential Boon for EVs

The supply shock from Russia’s invasion of Ukraine continues to create enormous turmoil for Europe and the rest of the world.2 Here in Australia, a nation with huge deposits of old-world energy sources of thermal coal and natural gas, it may be tempting to think that we would somewhat immune to energy issues, even in the move towards renewables. However, in mid-June, supply-related issues threatened blackouts across the heavily populated East Coast, which includes the metropolises of Sydney, Melbourne, and Brisbane. The threat was so severe that it resulted in the suspension of the spot energy market for the first time ever to ensure that supply reached those markets.1

For the Northern Hemisphere, this summer was to be one to get back outside and on the road post COVID-induced travel restrictions.3 However, with fuel input costs rising steeply, long-awaited travel plans may be shelved for longer as consumers contend with higher airfares and gas prices. Expectations for air travel to return to pre-pandemic levels range from 2025 to even further out.4 Regions such as China continue to deal with lockdowns, which further slowed China’s domestic travel and its large international tourism economy.5 For airlines, these headwinds may push out broad profitability until late 2023, perhaps more likely to 2024 or even 2025.6

One area in the travel space that may benefit is hotel groups, which have more ability to pass on increased energy costs to consumers due to high demand for hotel/resort-type holidays. Elsewhere, outside of buying higher correlated stocks in the traditional oil and gas sectors, electric vehicles are a somewhat obvious segment that can benefit from the shift in thinking on energy inputs.

EVs certainly are not immune to the rising energy costs and considerations; however, battery technology continues to improve rapidly, including output efficiency and range and with gas prices at the pump high, we believe that EV producers, and potentially EV materials suppliers, can capitalize on the opportunity.8 For consumers looking to make the switch to EVs quickly, the biggest issue in the near term may be finding an EV without going on a waitlist given the current demand/supply imbalance.9

Inflation becomes increasingly negative for companies if their input costs rise and they’re unable to pass on these costs to their customers. This scenario obviously affects the bottom line, but where costs are passed on, there can also be flow-on effects, including to product demand. Rising interest rates compound this issue. We can attribute the majority of the pain in the financial markets, the digital assets space included, to the effects of this inflation effect. To see the direct effect of this we can look to the discount rates applied to companies listed globally which have understandably re-rated, resulting in large drops in company fair values.

Also looming over recent performance is the risk of stagflation and/or a recession. Luckily, employment remains strong globally, so there is some cushion. Still, the number of companies that cited “inflation” on their earnings calls increased significantly in Q1 2022. Over 400 companies mentioned that inflation affected their performance in some way, up from 350 in Q4 2021 and 300 in Q3 2021. Additionally, the number of companies citing supply chain challenges decreased slightly. Roughly 350 companies spoke to some degree of how the supply chain challenges affected their performance, down from 360 in Q4 2021 and 365 in Q3 2021.

For investors, with so many companies de-risking, this environment presents a multitude of challenges. Many thematics have some level of interrelation, which doesn’t make it any easier. We believe it’s best to focus on areas where businesses operate in forms of monopolistic or oligopolistic markets and can pass on costs without impacting demand significantly. Businesses with exposure to inelastic buyers are favorable as well.

In our view, the Cybersecurity theme is a particularly compelling example. With cyberattacks on government institutions, non-governmental organizations (NGOs), and think tanks increasing in prominence and complexity, governments are upping the ante on cybersecurity spending. For example, the U.S. government is proposing $2.5 billion for the Cybersecurity and Infrastructure Security Agency in 2023, a $500 million increase from 2022. Australia is spending $10 billion to double the size of the Australian Signal Directorate, the government’s intelligence and security agency.9,10

The war in Ukraine and the geopolitical machinations only increase the importance of strong cyber defense. Executive orders and the White House’s new cybersecurity strategy will likely increase adoption, particularly when there are plans for government oversight and rules mandating minimum standards.10 We believe that shifting cybersecurity from a voluntary investment into a regulated investment necessary to do business is likely to increase rapid adoption in the U.S., Europe, and elsewhere, with inflation unlikely to impact demand to any significance.11 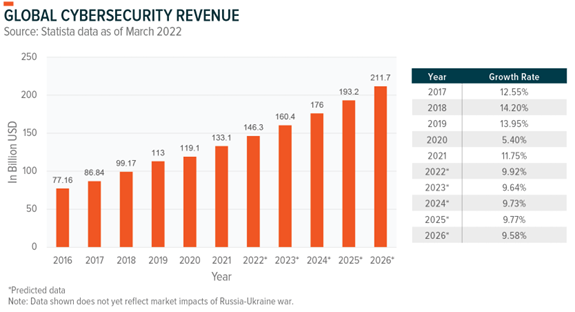 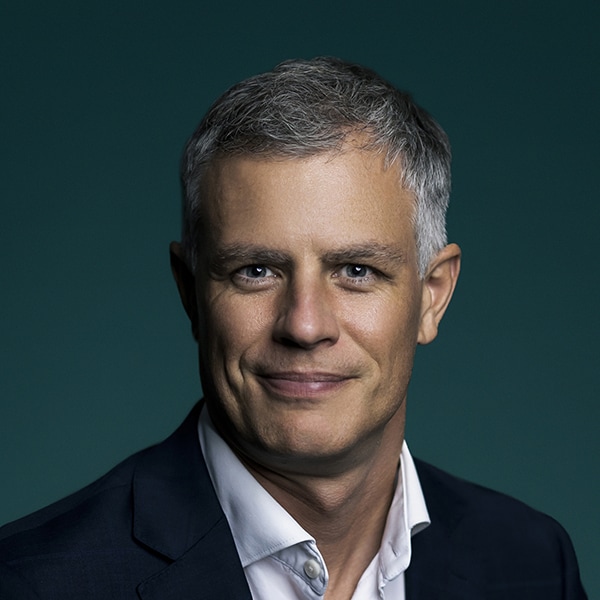