Is Thematic Growth a Crazy Response to High Inflation?

We consider Warren Buffett a pretty wise and successful investor. So in analyzing current investor perceptions about thematic growth, we looked at advice he offered in a Berkshire Hathaway shareholder letter all the way back in 1981, another period of high and persistent inflation. Buffett suggested buying businesses with two characteristics: pricing power and rapid growth. Growing revenue rapidly, by either means, can provide insulation from inflationary headwinds and may even result in margin expansion.

In 2022, growth stocks have fallen out of favor with investors concerned about rising interest rates and profit margins. However, as we discuss in this piece, closer inspection reveals that these concerns might be overdone. And if we follow Warren’s wisdom, we believe that investors may want to reconsider thematic growth as a sound approach to offsetting high inflation and slowing economic growth.

Companies in some of the most dynamic and disruptive segments of the economy continue to prove the thesis that innovation is a powerful factor driving the economy, even amid two quarters of contracting Gross Domestic Product (GDP). Of the over 30 growth themes that we track, including Cybersecurity, Artificial Intelligence (AI), Renewable Energy, and Digital Health, 32 of them had more than 50% of companies grow sales faster than July’s 8.5% inflation rate (Exhibit 1). And within those thematic baskets, most had an even greater percent of companies’ sales growth beating inflation. Conversely, only 63% of S&P 500 companies managed to outgrow inflation. 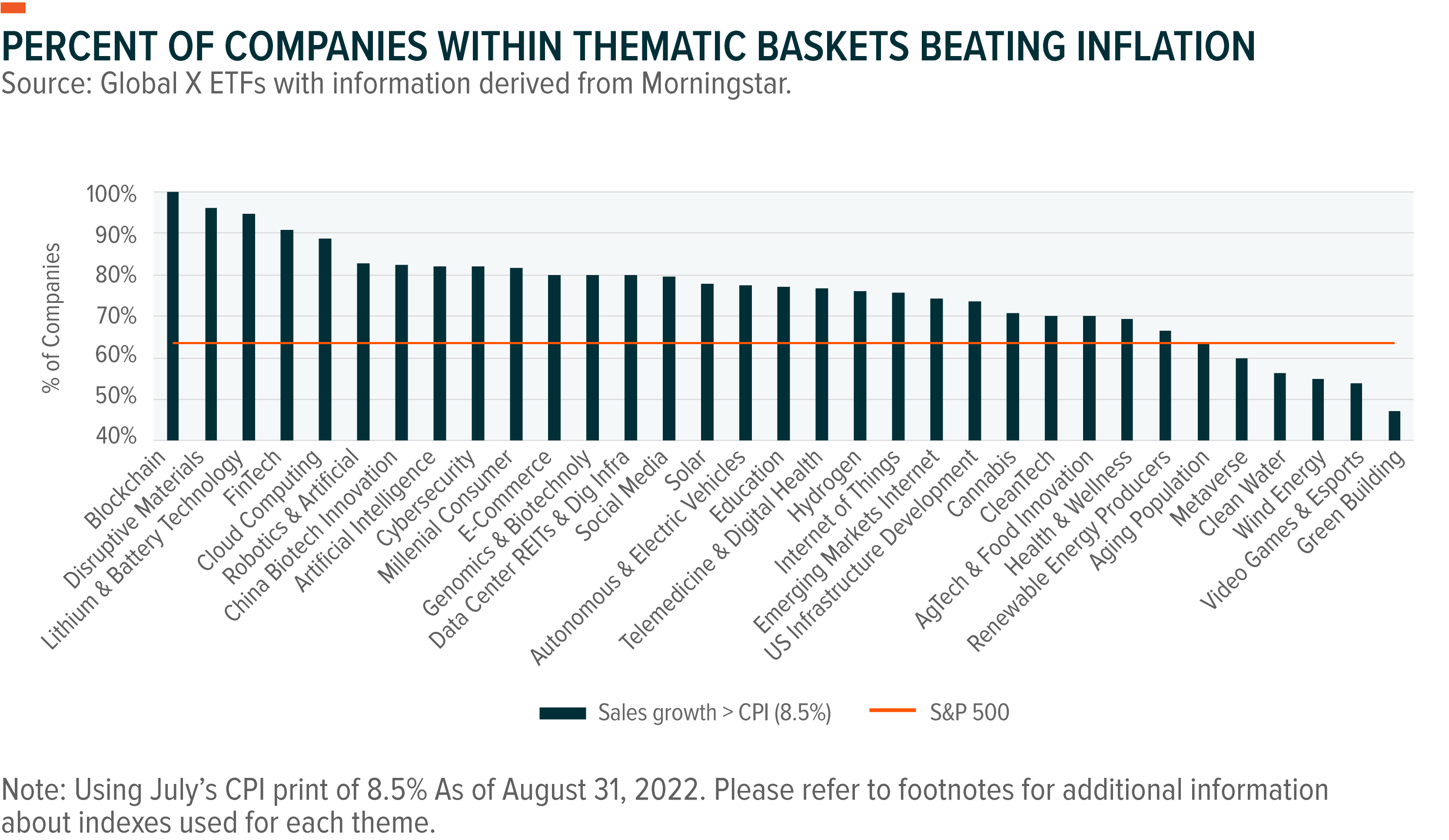 Catalysts driving growth across themes vary, but many are tied to long-term structural changes in the economy, potentially pointing toward further growth over time. For example, lithium and battery technology firms should benefit from ambitious electric vehicle (EV) plans and the inelastic nature of supply. Increased digitization means an increased need for protection against vulnerabilities, helping to ensure strong demand for cybersecurity firms. Genomics and biotech firms, boosted by strong sales of mRNA COVID-19 vaccines, have many new treatments in development. Also, the global energy transition is likely to keep cleantech, renewable energy, and hydrogen companies in demand, especially as fossil fuel prices remain high.

Higher interest rates translate to higher borrowing costs for companies over the long run. Increases in the cost of capital reduce the value of future earnings. While all equities are subject to this discounting, companies with loftier expectations for earnings further out in the future are the most susceptible. Growth companies generally reinvest capital today to grow future earnings. In theory, this feature makes them sensitive to rate increases.

Companies’ cost of capital, and therefore the price of equities, should be more sensitive to long-term rates. Fluctuations in short-term rates may not warrant revaluation or selloff, especially companies with relatively low debt levels common in the growth stage. The recent interest rates increases are more pronounced on the short end of the yield curve. The 6-month Treasury is 360 basis points (bps) higher year-to-date (YTD), increasing from 0.18% to 3.68%, while the 10-year Treasury is 190bp higher, increasing from 1.51% to 3.45%. A 25bp change in expectations for the Federal Reserve (Fed) funds rate may have little, if any, impact on long-term rates, and less so for companies with low debt levels.

Growth stocks already went through significant valuation compression this year as interest rates rose. The Russell Growth Index forward price-to-earnings multiple contracted from 34x to 24x YTD. The S&P 500, by contrast, is down only 5.5x. Since 2001, large cap stock valuation is inversely correlated with long rates (Exhibit 2). When interest rates rise, the price-to-forward-earnings ratio on the S&P 500 is typically lower. The higher-growth Technology sector is an exception, as the multiple has increased with rates over that time. Further, there is no meaningful historical relationship between the 10-year rate and the Communications sector, which includes growth segments like social media and streaming companies. 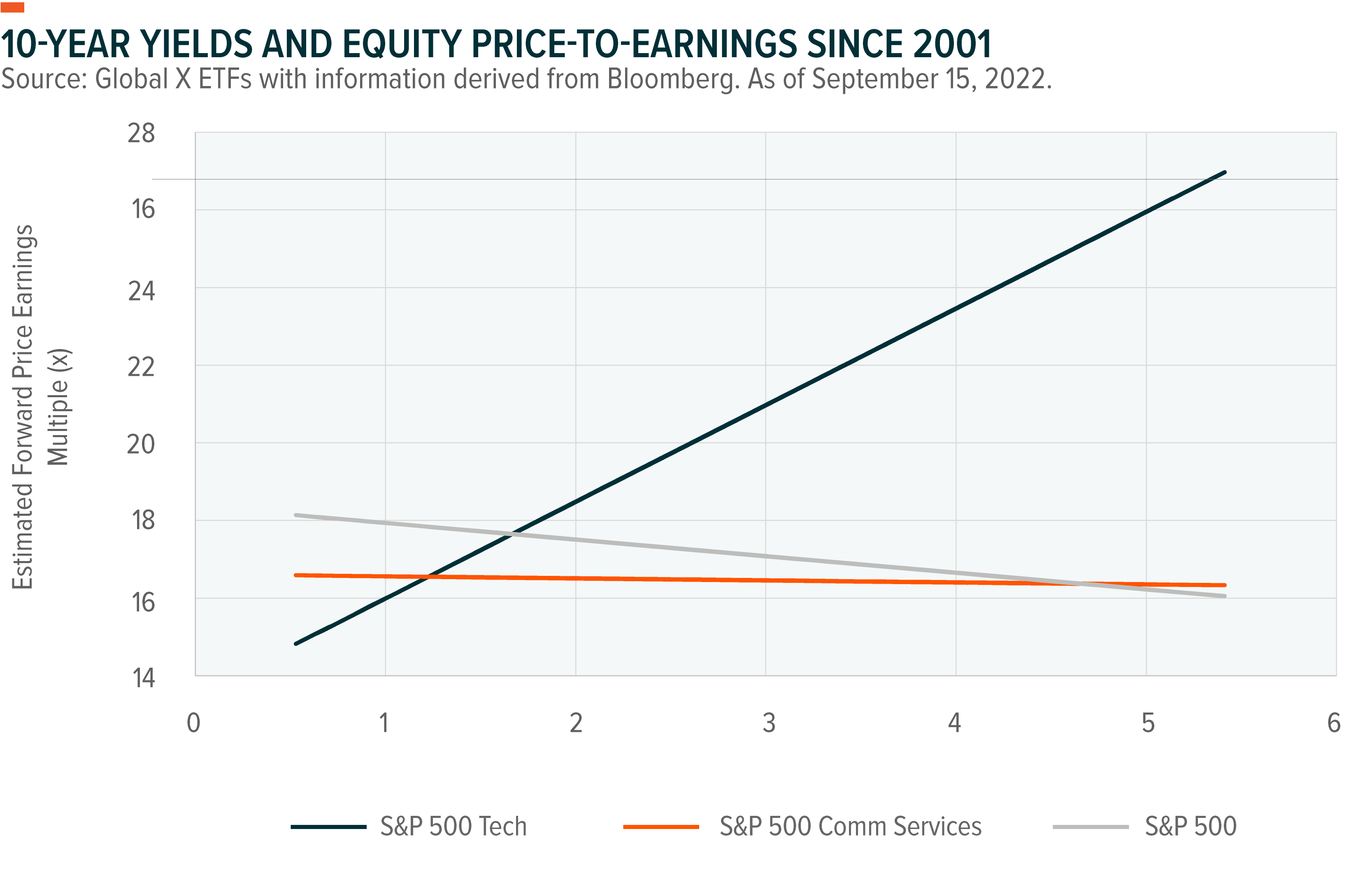 Some pundits argue that significant downward revisions to corporate profit estimates through the end of the year are warranted as companies face higher costs from labor and inputs at a time when demand may weaken. However, earnings expectations for the S&P 500, currently at $226, have remained relatively consistent this year, ranging from $220 to $230 per share.

One clue to the earnings resilience may be found in the divergence between producer prices and consumer prices (Exhibit 3). Consumers first saw prices rise 7% year-over-year (YoY) in December 2021. But companies saw that type of price increase a full eight months earlier in April 2021. Consumer price increases peaked at 9.1% in June 2022, versus producer prices peaking at 18.3% in June 2022. The difference between the two reached a 70-year.

Despite the quicker rise in producer prices, S&P 500 companies continue to generate profit growth YoY. To be sure, a slower rate of price increases for companies would be preferred, but firms seem to have found ways of navigating through the higher cost environment, likely through greater operational discipline and improved technology deployment. One common cost control tool, downsizing, has not come into play yet, as hiring in the U.S. remains robust.

The labor market, and its effects on the health of the U.S. consumer, may be the biggest potential headwind. If unemployment were to rise rapidly and consumer spending contracted as a result, there would be implications for equities broadly. 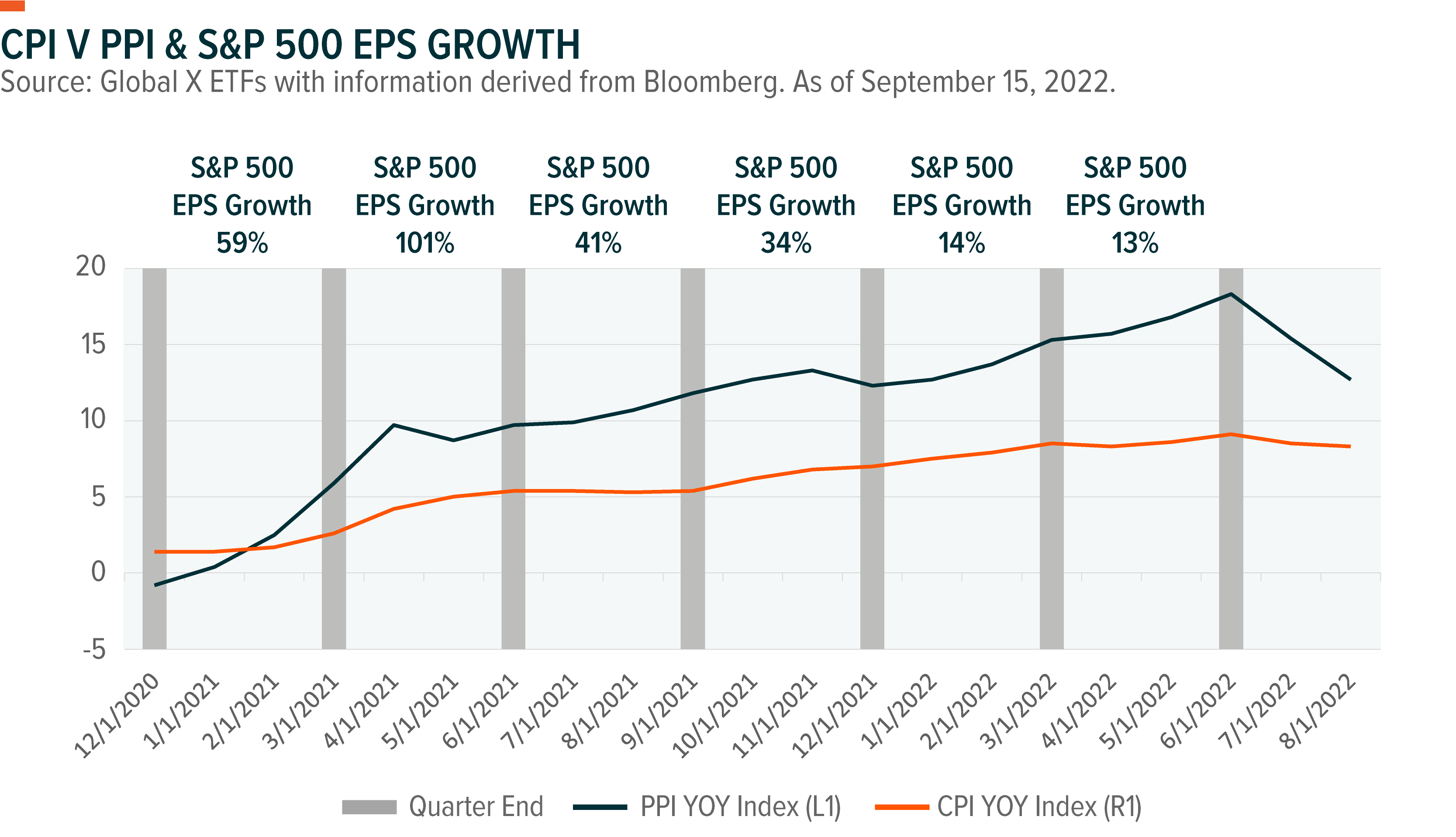 It’s understandable why investors are skittish of assets seemingly vulnerable to this high inflation, rising rate environment. However, in markets like these, it’s often best to eliminate as many variables as possible and simplify investment decisions. In our view, Buffet’s message in 1981 offers a guide. Pricing power and rapid growth can be keys to coping with high inflation. They’re also common traits of thematic growth equities. And through them, we believe that investors can find rapidly growing revenue that helps protect against inflation along with opportunities to capture innovation tied to longer-term structural shifts in the global economy.

Exhibit 1 – Reference index for each theme: