A fund with over 25% of its assets invested in Master Limited Partnerships (MLPs) does not qualify as a Regulated Investment Company (RIC) and instead, is structured as a ‘C-Corporation’ (C-Corp). As a result, these funds, which include ETFs, Mutual Funds, and Closed End Funds, must accrue corporate level taxes on the appreciation of the fund’s holdings. As the fund accrues a ‘tax liability’ in a bull market, the performance of the investment vehicle will lag its underlying components.

Should the market turn negative after a bull market, a fund can use its tax liability to offset future losses in the fund, providing a buffer on the way down. The buffer only works, however, if the fund has already accrued a tax liability from prior market appreciation.

If the fund is new, or has already exhausted its tax liability from a sustained bear market, the fund’s performance will begin to trade in-line with its index on the way down. Because the fund’s future performance is influenced by whether or not it has previously accrued a tax liability, returns are considered path dependent.

Hypothetical Performance of MLP Index vs. MLP Index Fund with Tax Liability in a Bear Market

If the fund does not have a tax liability and continues to fall, it will accrue a ‘tax asset’ which can be used to offset future gains until the asset is exhausted. This means that the fund will trade in-line with the index on downward movements, and in-line on upward movements, until the tax asset reaches zero. Beyond this ‘zero’ point, upwards movements will result in the fund accruing a tax liability, and the fund will experience tax drag. 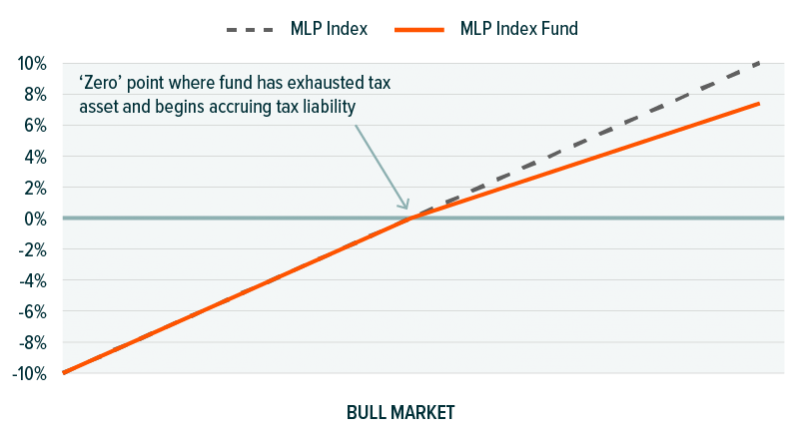 Future performance of an MLP fund can depend on its previous price movements, which determine whether it has a tax asset, a tax liability, or is at its ‘zero’ point.

Investing involves risk, including the possible loss of principal.  Investments in securities of MLPs involve risk that differ from investments in common stock including risks related to limited control and limited rights to vote on matters affecting the MLP. MLP common units and other equity securities can be affected by macro-economic and other factors affecting the stock market in general, expectations of interest rates, investor sentiment towards MLPs or the energy sector, changes in a particular issuer’s financial condition, or unfavorable or unanticipated poor performance of a particular issuer (in the case of MLPs, generally measured in terms of distributable cash flow).

The potential tax benefits from a fund’s investment in MLPs depends largely on the MLPs being treated as partnerships for federal income tax purposes. As a partnership, an MLP has no federal income tax liability at the entity level. Therefore, treatment of one or more MLPs as a corporation for federal income tax purposes could affect a fund’s ability to meet its investment objective and would reduce the amount of cash available to pay or distribute to you. There is no guarantee distributions will be made and dividends may be reduced or eliminated at any time. Furthermore, certain distributions are expected to be treated as a return of capital for tax purposes rather than from net profits and shareholders should not assume that the source of distributions is from the net profits of the fund.

The information presented here is for informational purposes only. It was prepared on information and sources that we believe to be reliable, but we make no representations or guarantees as to the accuracy or the completeness of the information contained herein.

Carefully consider the Fund’s investment objectives, risk factors, charges and expenses before investing. This and additional information can be found in the Fund’s full and summary prospectuses, which may be obtained by calling 1-888-GX-FUND-1 (1.888.493.8631), or by visiting www.globalxetfs.com. Read the prospectus carefully before investing.