In this quarter’s MLP Insights post, we examine how MLPs have adapted their business models in an effort to grow during this prolonged period of middling oil prices and explore how current MLP valuations stack up against historical levels and other similar investments. This analysis includes a discussion of the following topics:

2. MLP Valuations in a Historical and Relative Context

How are MLPs Reducing their Cost of Capital?

As oil prices have stabilized in the mid-$50s/barrel and US oil production recovers, MLPs are resuming their focus on generating future growth. Unfortunately, the rate of return on many projects has fallen since the era of $100/barrel oil. At the same time, rising interest rates are making both debt and equity financing more expensive, as investors are demanding higher yields. Therefore, in order to find economically viable projects, MLPs must work to reduce their costs of capital.

The majority of an MLP’s cost of capital comes from a combination of the interest rate paid on its debt and the cost of its equity. MLP corporate debt typically trades at a spread relative to a government bond with the same maturity. An MLP can actively seek to reduce this spread by increasing the credit-worthiness of their business. While some of their credit rating will be determined by uncontrollable macro-drivers in the energy space, such as changes in global oil demand, an MLP can seek to improve its credit rating by reducing its overall leverage. In the table below, we demonstrate how midstream MLPs have worked to reduce their debt burdens over the last year after they increased in 2015, in an effort to improve their standing with credit rating agencies and reduce their costs of capital.

A hindrance to retaining cash, however, is the large amount of distributions being paid to the MLP’s sponsor through incentive distribution rights (IDR) payments. (For more information on IDRs and the General Partners of MLPs, read our blog post on the topic.)

Not only can IDRs be an expensive component of an MLP’s current cost of equity, but the cost can rise as the MLP grows. This is because IDRs are similar to the concept of carried interest, in which an MLP’s General Partner takes a greater proportion of the distributions paid by the LP as distributions cross certain nominal thresholds. As such, many MLPs find their current and future growth is being handcuffed by onerous IDR payments to their GP.

In response, we have seen a number of MLPs undergo either a corporate simplification, in which a GP and LP are rolled up to become one corporation, or an agreement between the GP and LP for an outright cancellation – or at least a temporary waiver of IDR payments.

The corporate simplification route and the IDR cancellation/waiver method have different implications for the firms and their investors. In a simplification, the surviving entity can typically realize synergies as the firm capitalizes on economies of scale to reduce costs across the organization. In addition, the surviving entity is a corporation and not an MLP, allowing it much greater flexibility on its distribution policy. This means the organization can choose between retaining more cash flow to fund organic growth opportunities, reducing debt, or maximizing its yield. The downside to this simplification is that it could be a taxable event for LP unitholders, along with likely resulting in lower yields, given that the corporation is now a taxable entity. As a potential positive, existing LP unitholders could be bought out of their holdings at a premium, providing a near-term boost to returns. Additionally, taxes at the corporate level are often deferred as the transaction can result in a step up in basis of the acquired assets for the firm.

With the IDR buyout or waiver method, the MLP receives immediate relief from onerous IDR payments to the GP. These cash flows can be diverted to pay off existing debt or to organically finance future growth opportunities, as an attractive alternative to relying on equity or debt markets. A potential advantage is that there is no taxable event resulting from this agreement, and investors remain in the generally higher-yielding, tax-advantaged MLP structure. The downside to such an approach is that MLPs often must give up something of value in order to waive or eliminate IDR payments, such as needing to issue new equity to the GP.

How to Interpret Valuations?

The Solactive MLP Infrastructure Index has recovered approximately 75% from February 2016 lows through January 2017, prompting a number of investors to question whether valuations are now too high.2 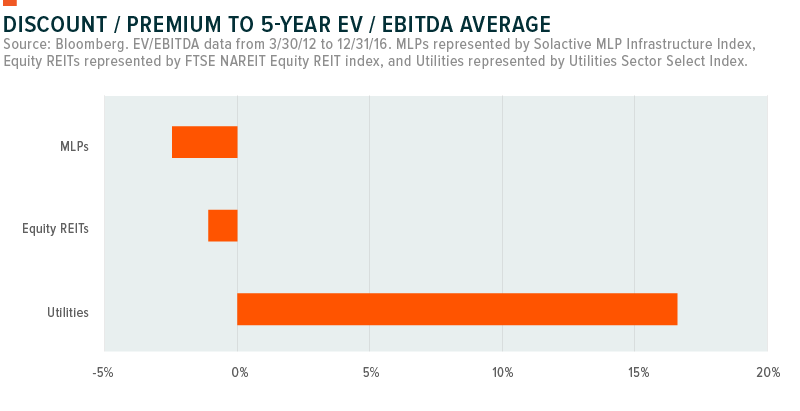 The spread between MLP yields and 10-year treasuries recently started to normalize after yields spiked in early 2016. Yet, despite a rising 10-year treasury yield in the second half of 2016 and falling MLP yields due to price appreciation, the spread between the two figures still remains higher than the 5-year average. This indicates that MLPs are providing a greater incremental yield over 10-year treasuries than they have on average over the last 5 years, potentially signaling that MLPs remain undervalued. 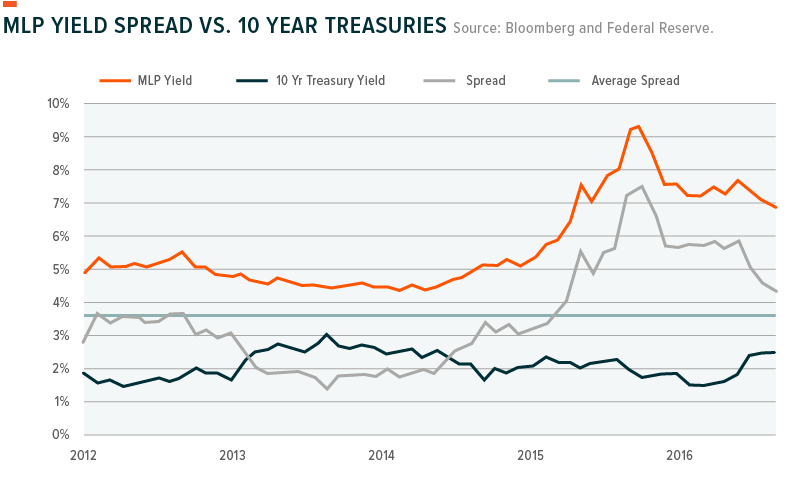 1.Yes, this is a circular process because one way for MLPs to improve their future prospects is to reduce their cost of capital.

3.There are important differences between MLPs, REITs, and Utilities. While all are traded on an exchange, REITs and MLPs often make high distribution payments given advantageous tax structures. Utilities are usually structured as traditional C-Corporations and are subject to taxes. Utilities can be regulated by local, state, or federal governments. MLPs are often subject to oil and energy-specific risks, while REITs are often subject to real estate specific risks. All three industries tend to have interest rate risks given their historically high distributions and yields compared to broad equity market indexes.

EV/EBITDA Ratio: A measure of the valuations of a firm and its dependence on the capital markets. A higher EV/EBITDA indicates a higher stock valuation or greater reliance on debt financing.