In this quarter’s MLP Insights piece, we examine some of the causes and effects of increasing crude output in the US, as well as the potential stimulus from the Trump administration’s policies on MLPs and energy infrastructure.

US oil production has rebounded almost 6% in 2017, taking total output to levels not seen since mid-2015.3 This turnaround is occurring while other major oil producing blocs are reducing their output either in an effort to rebalance the oil markets or because oil production has proven unprofitable at current prices.

With oil prices fluctuating around the $50/barrel level this year, many investors are wondering how US producers are able to profit and increase production in a low oil price environment. Fortunately for many US oil producers, the 56% drop in average crude prices from 2013 to 2016 was matched by a 55% drop in average wellhead breakeven prices over the same time frame.4 The fact that price of oil has remained above the cost of extracting the commodity in many basins has allowed oil producers to continue to profit on oil sales.

There a number of factors that have led to this dramatic fall in breakeven prices, including but not limited to: 1) technological advances including applying big data and 3D imaging techniques to optimize the selection of drilling locations, and using advanced materials in drills and pumps to improve reliability; 2) renegotiating oilfield services costs, which some estimate fell 40% from 2013 to 2016;5 and 3) the practice of high-grading, whereby producers only employ their most efficient existing wells, rather than drilling and completing new wells, which can be more expensive.

Since 2014, takeaway capacity utilization, which measures how much of the nation’s energy infrastructure is being utilized relative to its maximum capacity, has increased across the US as oil production has exceeded the growth of new pipelines. This trend emerged because the low oil price environment caused many pipeline operators to cancel or suspend projects designed to add additional capacity. The rise in oil output in 2017 has further strained US energy infrastructure and resurfaced worries about available takeaway capacity, particularly in high growth areas like the Permian Basin. 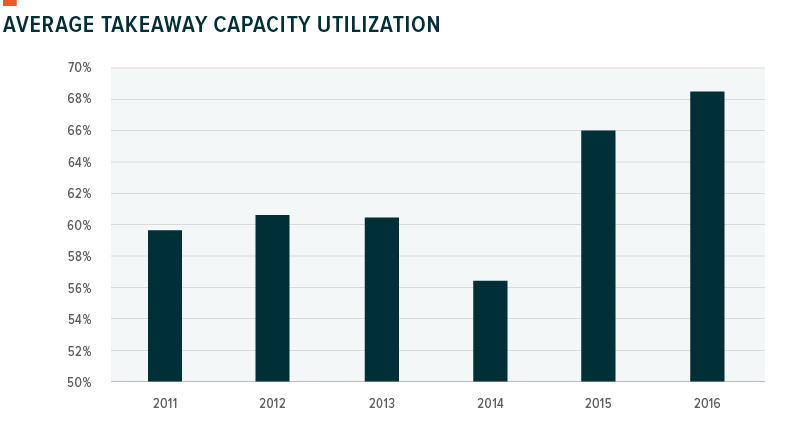 When takeaway capacity is in short supply, it can introduce unusual distortions in the oil markets. For example, the WTI Midland spot price, which is primarily used by Permian Basin producers, and the benchmark WTI Cushing spot price, used by most other US producers, experienced significant divergences from 2012 and 2014. WTI Midland traded at an average discount of $4.23/barrel versus WTI Cushing, and at times the discount spiked to as much as $20/barrel, despite historical trends of the two prices being largely identical.6 The cause of this distortion was a 62% increase in production over this time frame that challenged existing pipeline capacity in the Permian and forced producers to sell at major discounts.7 Estimates hold that production in the Permian Basin is currently utilizing 90% of takeaway capacity and could reach 100% by the end of the year.8

In an effort to avoid costly capacity issues arising again, pipeline operators have proposed a variety of new projects, including four in the Permian that could add over 800,000 barrels per day of capacity.9 In the natural gas space there is an extensive roster of proposed projects with 33 pipeline proposals around the country currently awaiting Federal Energy Regulatory Commission (FERC) approval.10

Beyond the consistent pre- and post-election discussion of the need to improve the US’s infrastructure, President Trump signed a series of executive orders, since taking office, with the aim of expediting the review process of portions of the Dakota Access Pipeline and Keystone XL. By streamlining environmental reviews and expediting the permitting process, the Administration hopes to remove ‘red tape’ that adds time and expenses to future infrastructure development.

Most recently, the Administration’s preliminary tax plan outline demonstrated support for infrastructure investment through the reduction of taxes that should benefit MLP investors. Direct MLP unitholders are currently taxed at a maximum pass-through rate of 39.6%, the top individual income tax rate, on their proportionate share of partnership income and depreciation recapture upon the sale of their investment.11 The proposed plan lowers this rate to just 15%. By lowering the effective tax rate for MLP unitholders, the asset class is expected to become more attractive to investors, which should in turn result in higher valuations and lower costs of capital for MLPs looking to raise money for infrastructure projects.

While recent oil price volatility has put near-term pressure on MLP unit prices, the midstream energy space could potentially benefit from strong macro-tailwinds. Lower breakeven prices are spurring the rapid growth of oil production in the US, which in turn is creating additional demand for infrastructure assets. The Trump Administration’s executive orders, tax proposal, and infrastructure spending plan are providing further support for infrastructure development. These circumstances are coming together to create an environment in which midstream MLPs and energy infrastructure companies might increasingly prioritize seizing growth opportunities.