Despite geopolitics and trade war uncertainty driving a choppy quarter for the broad markets, MLPs & energy infrastructure stocks largely carried forward their positive momentum from Q1. Conditions in the space improved enough that we saw the first MLP Initial Public Offering (IPO) in nearly 18 months. In our Q2 2019 MLP Insights, we discuss some of the major factors driving the midstream energy space, including:

The broad equity markets have primarily been driven by geopolitics this year, with trade wars taking center stage. Many megacap companies have significant exposure to international markets via their supply chains, growth strategies, or both, making trade wars, and the uncertainty they cause, particularly impactful.

By contrast, MLPs and midstream energy companies largely derive their revenues from domestic sources. While 39% of the S&P 500’s revenue comes from abroad, approximately just 15% of midstream revenues come from outside the United States.1 And for midstream firms with revenue exposures outside the US, they are typically limited to Canada and Mexico. On average, the industry has about 10-15% of its revenues with exposure to Canada and less than 1% to Mexico.2 This geographic exposure has helped insulate midstream firms from the trade war pressures affecting the broader equity markets. As such, the midstream segment is up 19% in 2019, outperforming the S&P 500’s 10.4% return through June 3rd.3 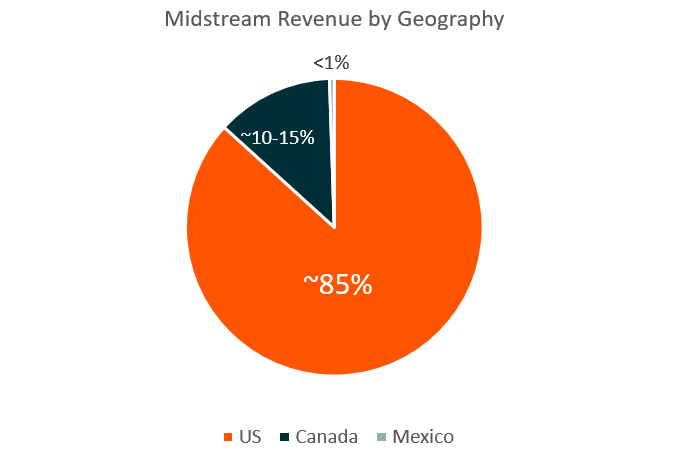 In conjunction with its domestic focus, the midstream segment’s significant dollar-based currency exposure has helped further insulate it from geopolitics. While the trade wars, shifting monetary policies, and volatile commodity prices have dented international currency values, the dollar has held up well. As a result, companies with significant foreign revenue have suffered from depreciating currency values – a headwind that has not afflicted the midstream space. 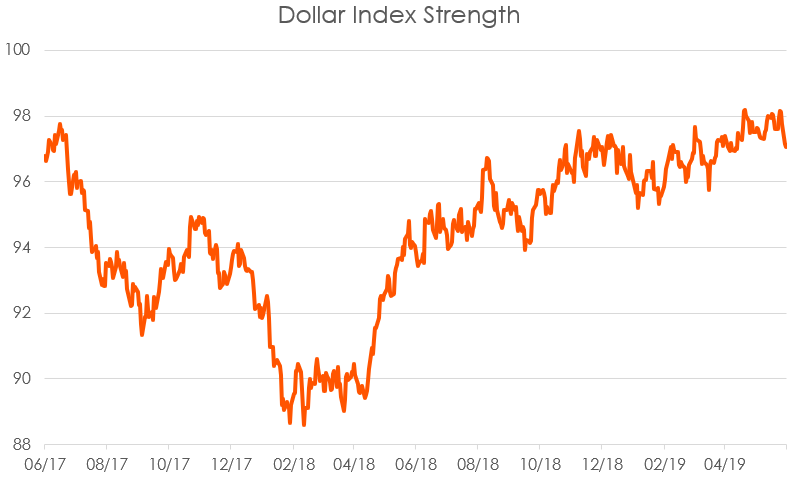 Source: Bloomberg. Data from 6/4/17 to 6/4/19. Data based on the Dollar Index that measures dollar strength against a basket of currencies.

Help from the Fed

The Fed’s December pivot to a more dovish stance has offered additional support for the midstream space, with higher yielding investments benefitting from falling bond yields. Since the end of 2018, the US 10-year Treasury rate fell by 65 basis points (bps), dropping from slightly over 270 bps to just above 200 bps now.4 The market is now pricing in three rate cuts by the end of 2019, and four total by the end of 2020, expressing that it believes rates will be aggressively heading downward in the near term.5

This has provided positive support for income-oriented segments like MLPs & midstream companies, REITs, and Utilities. With monetary policy becoming more accommodative, yield is once again becoming challenging to find. High yielding areas like MLPs have become more attractive in this environment, with their yield spread over the 10 year treasury rising quickly to near multi-year highs. 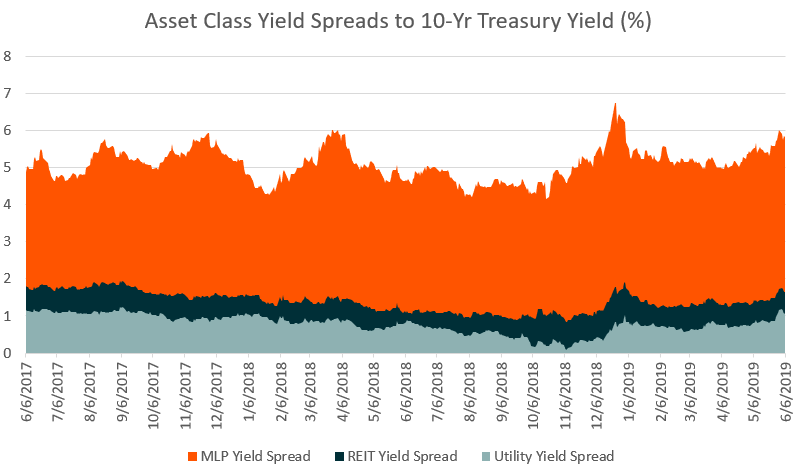 Transactions in the midstream segment appear to have picked up in 2019, with the first MLP IPO in a year and a half, various private equity deals, and JV transactions.

On the MLP side, market participants were greeted with the IPO of Diamondback Energy’s (FANG) midstream assets on May 22nd. The entity, Rattler Midstream Partners (RTLR) is structured as a partnership, but taxed as a corporation that offers a 1099 tax form to investors instead of a K-1. It was the first MLP IPO since BP created BP Midstream Partners (BPMP) to house their midstream assets in November 2017. RTLR priced at the mid-point in its IPO range and has returned 7.3% since inception against a -2.9% for the broader MLP asset class, indicating there is still demand for the MLP structure and a willingness to invest in it. Yet asset quality, sponsor, and business model are being scrutinized more than ever in today’s environment.6

Another deal included the simplification of Andeavor Logistics LP (ANDX), which announced an agreement to be acquired by its sister MLP (MPLX) at a 7.3% premium. Unfortunately, as we’ve seen in other family simplification transactions, this will result in a ~27% backdoor distribution cut for ANDX unitholders based on the terms of the deal.7

There has also been news of greater private equity interest in midstream, indicating demand from a new investor type. Buckeye Partners LP (BPL), a publicly traded entity, announced an agreement to be acquired by an Australian private equity infrastructure company, IFM, at a 27.5% premium. The significant premium indicates that private equity firms may be seeing value in midstream assets. In the table below, we provide a snapshot of a handful of deals that recently taken place and the different parties involved.

We believe that renewed interest from buyside firms and their willingness to engage in transactions with public entities represents a vote of confidence for the space and could serve as an eventual catalyst for valuation expansion.

While midstream performance has started off strong this year, we believe that a confluence of tailwinds could further power returns. With strong domestic exposure during heightened geopolitical risk, attractive yields in a falling rate environment, and growing interest from private equity sources, we believe MLPs and midstream companies are facing an attractive macro backdrop.

These tailwinds could help to reverse years of challenges in the midstream space. Over the last few years, multiples for midstream entities have shrunk from close to 13x EBITDA in 2014 to 10.5-11x currently.8 Therefore we believe there is room for multiple expansion, should oil prices remain range bound and midstream entities continue to make smart operational decisions.

2. Based on a weighted average of the Solactive MLP & Energy Infrastructure Index. Using 2018 full year revenues. Data as of 6/3/19. Data from Bloomberg and Global X Research.

5. Bloomberg. Data as of 6/7/19. Based on Fed Futures Rates and Implied Probabilities.

7. Andeavor Logistics LP. Backdoor distribution cut approximation based on terms of the deal.

8. Based on forward EV/EBITDA multiples.

The potential tax benefits from investing in MLPs depends on the MLPs being treated as partnerships for federal income tax purposes. If the MLP is deemed to be a corporation then its income would be subject to federal taxation at the entity level, reducing the amount of cash available for distribution to the fund which could result in a reduction of the fund’s value. Indices are unmanaged and do not include the effect of fees. One cannot invest directly in an index.