Following a strong start to the year, midstream stocks faced increased macro and geopolitical risks in Q3 as the trade war, and fears of slowing global growth, intensified. These concerns applied pressure on oil & gas prices, impacting the broad energy complex, and raising concerns about potential future production volumes. In this quarter’s MLP Insights, we highlight and analyze recent developments in the midstream energy space, including:

The Impact of Lower Commodity Prices

Perhaps the most impactful story in the energy markets this quarter was the lower natural gas prices, which dragged down natural gas-related stocks. Technological improvements have made it easier than ever to unlock and capture natural gas from the ground, leading to an environment of heightened supply. Correspondingly, US natural gas prices reached their lowest levels since 2016 as supply levels swelled and European natural gas prices fell to a 10-year low. In addition, high inventories of stored gas have made it difficult for prices to recover. 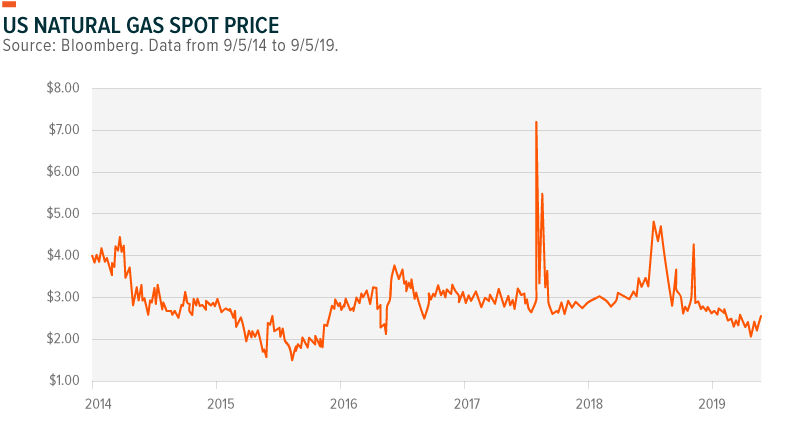 While demand for natural gas is highly seasonal, long term trends are showing consumption is increasing, particularly in power plants due to its cleaner footprint than other fuels like oil and coal. Exports have been a big channel of growth too. US LNG exports have grown from close to zero at the beginning of 2016 to over 5.2 billion cubic feet.1 But the intense rise in natural gas supply has kept a lid on prices recently. Part of this increased output is because natgas is a byproduct of oil production, which is growing quickly in areas like the Permian Basin. 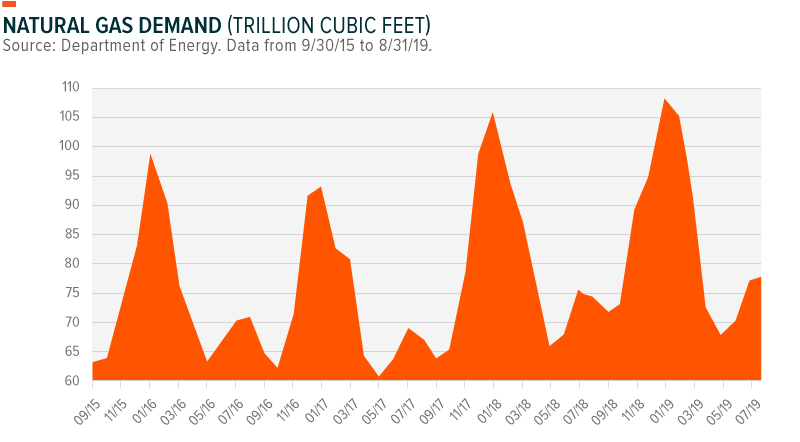 While midstream entities tend to not have direct commodity price exposure, if spot prices fall below levels that are profitable for production, then volumes can be reduced, and the midstream segment can suffer. Overall, the price pressure on natural gas has impacted some midstream firms involved in transporting and storing the commodity, particularly midstream energy companies (C-Corps). The midstream C-Corps segment as a whole has more exposure to natural gas than the midstream MLP segment, causing the C-Corp to underperform MLPs in recent months. C-Corps have underperformed MLPs by close to 300 basis points over the last 6 months.2 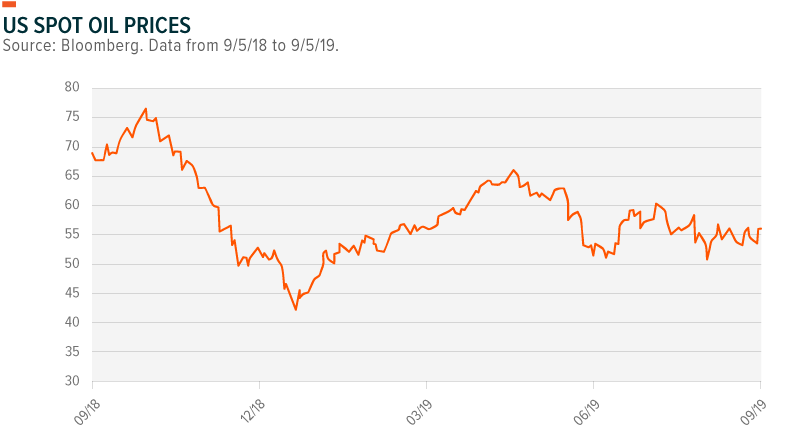 To address some of these temporary challenges stemming from lower commodity prices, midstream entities have been looking to shore up investor confidence. With interest rates falling, a number of sizable debt issuances have been announced. This has the advantage of raising cheaper capital for expansion projects, while also showing that these companies aren’t concerned about leverage. Buybacks have been picking up steam as share prices have fallen. NGL Energy Partners (NGL) and Antero Midstream (AM) announced they may potentially buy back up to $150 million and $300 million of their stock, respectively. The midstream space has also been vocal about maintaining their dividend policies, which keeps the space attractive as interest rates fall and yield spreads (dividend yield minus short term interest rates) widen.

The fall in oil and natural gas prices has led to some questions about the risks upstream counterparties present to midstream companies. Most independent midstream companies have diversified customer bases, which mitigates the idiosyncratic risks associated with any one customer. But credit events ticked up noticeably when energy prices began falling this year. There were 21 bankruptcies in Q2 and Q3 combined after just 11 were filed total in the previous two quarters before that. 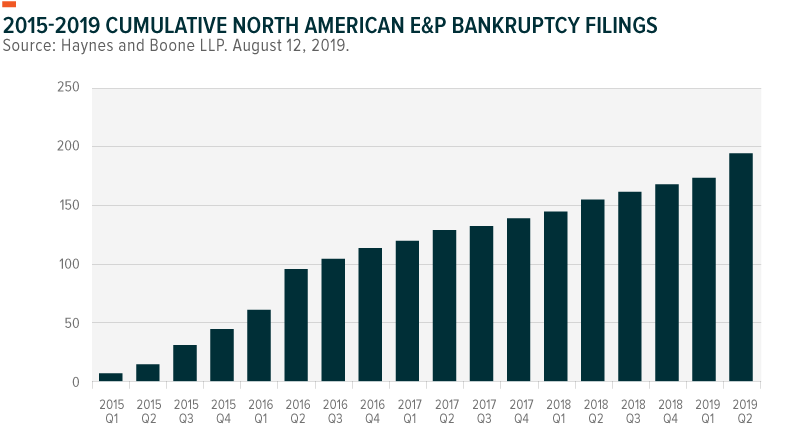 From a macro perspective, oil production has begun leveling off but hasn’t turned negative, and gas production has been rising steadily. But customer risk has been a growing concern with some high profile events this quarter. On its earnings call, Enlink Midstream LLC (ENLC) disclosed that their Q2 results were negatively affected by the bankruptcy of one of their customers, White Star Petroleum, resulting in a $40 million loss for ENLC.

However, those with the most concentrated customer risk are midstream companies created to service their upstream parent companies. Distress at the parent level likely has more of an outsized impact than those with a more diversified customer base. In the table below, we look at midstream companies with this parent risk and how they’ve fared this year. As depicted in the table, there isn’t a perfect correlation of parent-to-midstream entity performance given the different business models, but in general the more financially stable the parent, the better the midstream entity has fared. 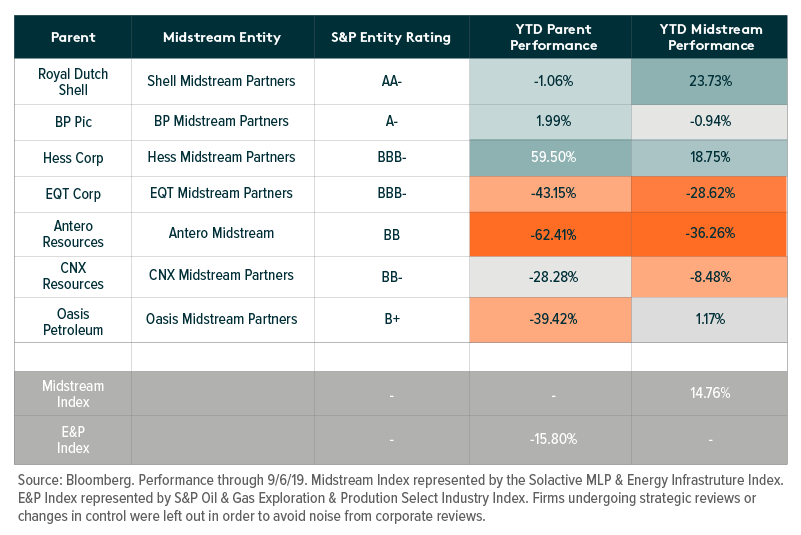 We believe this analysis provides compelling evidence for why a diversified approach to investing in the midstream space can help mitigate the risks associated with individual entities. A rebound or decline in an individual sponsor or their parent’s fortunes can be challenging to predict and have a significant impact on returns. MLPs and C-Corps with diversified customer bases naturally hold less idiosyncratic counterparty risk, but just investing in these entities individually can still leave more concentration risk than desirable. For the further diversification, investing in a broad basket of these firms across the midstream space can help further reduce the risks associated with individual E&P customers.

One trend we’ve been analyzing extensively in other MLP Insights posts is the impact of ‘corporate overhangs,’ where uncertainty around the corporate structure of various midstream firms has weighed on returns. While most of these issues within the midstream space have been resolved through C-Corp conversions and rollups, new questions have resurfaced recently.

A handful of strategic reviews and actions by significant shareholders has brought corporate overhangs back into the fold. Specifically, uncertainty around sponsor support for Western Midstream Partners (WES) and Noble Midstream Partners (NBLX) has prevented these stocks from developing positive momentum. After WES’s parent acquisition by Occidental Petroleum (OXY), lukewarm support from OXY about keeping WES as an investment has dented shareholder confidence. Similarly, a lingering strategic review of NBLX by parent, Noble Energy (NBL), has negatively weighed on NBLX. In addition, private equity (PE) owned midstream companies saw action taken by their investors. Tallgrass Energy (TGE) received a tender offer from investor, Blackstone (BX) to take TGE private for the remainder of the company they did not own. Similarly, there were reports that BX was marketing its stake of Cheniere Energy Partners (CQP) in a sale effort. The read-through to the market is that other PE-backed midstream companies may face similar fates such as a stake sale or a privatization effort to avoid daily mark-to-market valuations in the public markets or to acquire assets at low valuations.

While corporate overhangs can leave investments in limbo until there is a clear path forward, the upshot is that once corporate actions are announced, they can ultimately unlock additional value. Recent transactions in the midstream space have executed at significant premiums and made in cash, particularly when private equity is involved. Such asset sales and privatization efforts could also help reset broader valuations in space as multiples remain near historical lows.

While low oil and gas prices have recently weighed on the midstream space to start the second half of the year, we remain positive on the space. First, there are several catalysts that could propel commodity prices higher, ranging from aggressive rate cutting from the Fed (which would weaken the USD and support higher commodity prices), heightened geopolitical risks in the gulf, and a reduction in supply from OPEC+ countries. Second, a sustained falling rate environment would lower the cost of capital for midstream entities, while also make high yielding asset classes like MLPs more attractive to investors. Further, the low valuations and strong fundamentals in midstream paint an attractive picture for driving long term returns, which could be stimulated by M&A activity.

The potential tax benefits from investing in MLPs depends on the MLPs being treated as partnerships for federal income tax purposes. If the MLP is deemed to be a corporation then its income would be subject to federal taxation at the entity level, reducing the amount of cash available for distribution to the fund which could result in a reduction of the fund’s value. Indices are unmanaged and do not include the effect of fees. One cannot invest directly in an index.