In this quarter’s MLP Insights, we tackle the following topics that we believe are particularly relevant to MLP investors as we head into year-end:

The Transition to the Self-Funding Model

During the early years of the US shale production boom, investor appetite for MLPs surged given their high yields and attractive growth potential. In order to simultaneously pay out a high amount of their distributable cash flow, while funding capital-intensive growth opportunities, MLPs relied heavily on debt and equity issuance.

As debt levels increased and equity valuations fell- due in part to the lower oil price environment- many MLP management teams and investors realized that relying on the capital markets for financing growth was too costly to sustain. Therefore, MLPs are increasingly looking for ways to self-finance their growth.

One method is to adjust their distribution policies to retain more of their cash flow. The chart below shows how in the aggregate, MLPs have been cutting back on distribution growth over the last few years.

Source: Bloomberg. Distribution Growth measured as year-over-year increases in distributions. Values are an average of the current composition of securities in the Solactive MLP Infrastructure Index. MLPs that have full year of both distribution history and cash flow history were used in the year-over-year calculations.

If MLPs grow their distributions at a slower rate than they grow their distributable cash flow, they can retain more funds for financing projects organically, and rely less on issuing debt and equity. This is depicted in the following chart, which shows a five-year low in combined MLP debt and equity issuance. It is no coincidence that this is happening at a time when the cost of equity and debt capital is rising, providing a strong incentive for MLPs to shift to a self-funding model rather than to rely on the increasingly costly capital markets. 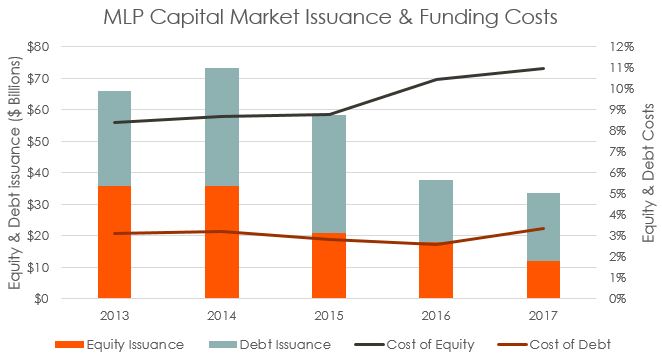 What does this move to the self-funding model look like in practice? One of the most famous and dramatic examples was executed by energy infrastructure giant, Kinder Morgan (KMI). In 2014, the company rolled-up its LPs and GPs into a single ‘Energy Infrastructure Corporation.’ This simplified the corporate structure and eliminated the onerous IDR payments that had to be paid to the GPs. One year later, the firm cut its dividend by 75% in a ‘rip-off-the-Band-Aid’ approach to retain more cash flow. The company ultimately used this retained cash to reduce their debt levels by 5% and fund over $3 billion in growth projects in 2017.2

Few MLPs have taken as dramatic of an approach to self-fund. Some have announced lower future distribution growth, others have taken one-time cuts in their distributions. Many have found innovative ways to reduce the burden of their IDR payments to their General Partners, such as offering them Limiter Partner units instead.  Its possible MLPs may also become more selective about the growth projects they pursue to further avoid depending on debt or equity issuance. But overall, entities moving to a self-funding business model has been pervasive in the industry.

Drivers of the 2nd Half Selloff

Many investors have been perplexed by the MLP selloff that began in August, particularly given the recent rally in oil prices that returned prices to the mid-$50/barrel range. In our opinion, the MLP selloff is likely a result of the movement to the self-funding model and the uncertainty it presents to distribution-focused investors.

At the end of the day, investors want to know what they are buying. Investors who prioritize the distribution aspect of MLPs likely want some combination of high yield and distribution growth. The shifting MLP business model, however, has clouded what distribution policies may look like going forward. Will an MLP switch to a C-Corp and cut their distribution by 75%? Will it eliminate distribution growth for three years to pay down its debt? Will it remain pat and continue its historical distribution trends? Will it try a few of these approaches until it finds the right one?

Retail investors don’t have the patience for this, given their tendency to prioritize distributions over valuations and longer term growth prospects. With MLP distribution policies changing regularly this year, it has jarred the asset classes’ core investment base. In 2014, estimates placed retail ownership at 60% of the MLP market compared to just 33% in the broad stock market.  Therefore, it’s understandable how this group’s waning interest can cause a substantial headwind for MLP equity prices.3,4

If retail investors are leaving the asset class, it’s important to know if there is a new investor base that might have the patience to outlast this period of uncertainty. So far, we’ve seen a strong willingness by long-term oriented institutional investors to step into that place. These institutions tend to depend less on near distributions and care more about long term return expectations. This year alone, Blackstone purchased a $1.6 billion stake in Energy Transfer’s Rover Pipeline and sales involving MLP asset managers or index providers have spiked with three transactions this year involving over $50 billion in MLP assets under management (AUM) or MLP-linked products.5 In 2012, institutional ownership of MLPs was estimated to be just 30%. In 2016, this figure had jumped to around 40%.6

We believe that weak MLP performance has been exacerbated by the broad equity market rally, leaving MLPs and other energy-related equities among some of the only negative performers this year. This has given rise to higher recent trading volumes as investors look to the MLP space for tax loss harvesting opportunities.

The frustrating part for MLP investors is that the core businesses of MLPs have fared fairly well over this period. Cash flows have trended higher, consistent with the steady increases in domestic shale production this year. Rising oil prices driven by growing global demand leads us to believe domestic production will continue to grow over the long term. Yet cash flow based valuations have now reached their lowest levels since February 2016, as the stability and strength of the business has been drowned out by the market’s reaction to the shifting business model.

What will it take to return MLPs back to more normal valuations? Unfortunately, 2013-era prices where MLP owners assigned high valuations to the asset class expecting both attractive yield and strong distribution growth is likely not returning soon. Driven by the increasingly institutional ownership base, however, we expect to see MLPs stabilize distribution policies, improve balance sheet quality, and pursue a more limited set of high return potential projects. Ultimately, we believe these actions can result in a fundamentally stronger asset class with a greater focus on generating sustainable long term returns.

Investing involves risk, including the possible loss of principal. International investments may involve risk of capital loss from unfavorable fluctuation in currency values, from differences in generally accepted accounting principles, or from economic or political instability in other nations. Investments in securities of MLPs involve risk that differ from investments in common stock including risks related to limited control and limited rights to vote on matters affecting the MLP. MLP common units and other equity securities can be affected by macro-economic and other factors affecting the stock market in general, expectations of interest rates, investor sentiment towards MLPs or the energy sector, changes in a particular issuer’s financial condition, or unfavorable or unanticipated poor performance of a particular issuer (in the case of MLPs, generally measured in terms of distributable cash flow). The MLP funds invest in the energy industry, which entails significant risk and volatility. The funds invest in small and mid-capitalization companies, which pose greater risks than large companies. The funds are non-diversified.

The Funds have a different and more complex tax structure than traditional ETFs and investors should carefully consider the significant tax implications of an investment.

The amount of cash that MLPX will have available to pay or distribute to you depends entirely on the ability of the MLPs that the Fund owns to make distributions to their partners and the tax character of those distributions.