News: For the first time since 2008, OPEC formally agreed to a production cut. Saudi Arabia and Iraq, as the largest OPEC producers, took the biggest production cuts, agreeing to pump out 486,000 and 210,000 fewer barrels per day, respectively. Sunoco Logistics LP acquired Energy Transfer Partners, creating the second largest MLP by enterprise value. The Department of Energy announced that the US became a net exporter of natural gas for the first time in 60 years. (Source: Reuters, The Week, RT and Energy Transfer)1

Performance: Midstream MLPs, as measured by the Solactive MLP Infrastructure Index, gained 2.24% last month. The index has gained 13.05% since the end of last November. (Source: Bloomberg)

Valuations: The price-to-adjusted-EBITDA ratio, which seeks to provide more color on an MLP’s prices relative to their earnings, increased this month as MLP share prices appreciated, partly due to higher oil prices. Since last November, the ratio has increased approximately 8.81%, largely due to appreciating prices over the last 12 months. (Source: Bloomberg, MLPData, company financials).

Risk: Since the period of heightened volatility in early 2016, volatility has stabilized at just below 20%, two-thirds lower than the peak of MLP market volatility. West Texas Intermediate crude prices increased last month, up 5.51% to $49/barrel. We have found that when oil prices rise, correlations between MLPs and crude decrease. (Source: Bloomberg) 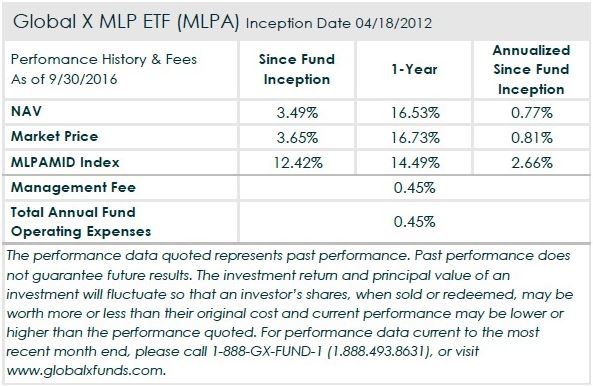 Investing involves risk, including possible loss of principal. In addition to the normal risks associated with investing, international investments may involve risk of capital loss from unfavorable fluctuation in currency values, from differences in generally accepted accounting principles or from economic or political instability in other nations. Investments in securities of MLPs involve risk that differ from investments in common stock including risks related to limited control and limited rights to vote on matters affecting the MLP. MLP common units and other equity securities can be affected by macro-economic and other factors affecting the stock market in general, expectations of interest rates, investor sentiment towards MLPs or the energy sector, changes in a particular issuer’s financial condition, or unfavorable or unanticipated poor performance of a particular issuer (in the case of MLPs, generally measured in terms of distributable cash flow). The Fund invests in the energy industry, which entails significant risk and volatility. In addition, the Fund is non- diversified which represents a heightened risk to investors. Furthermore, the Fund invests in small and mid-capitalization companies, which pose greater risks than large companies. The Fund has a different and more complex tax structure than traditional ETFs and investors should consider carefully the significant tax implications of an investment in the Fund. Current and future holdings are subject to risk.

The fund is taxed as a regular corporation for federal income tax purposes, which differs from most investment companies. Due to its investment in MLPs, the fund will be obligated to pay applicable federal and state corporate income taxes on its taxable income as opposed to most other investment companies. The fund expects that a portion of the distributions it receives from MLPs may be treated as tax-deferred return of capital. The amount of taxes currently paid by the fund will vary depending on the amount of income and gains derived from MLP interests and such taxes will reduce an investor’s return from an investment in the fund. The fund will accrue deferred income taxes for any future tax liability associated certain MLP interests. Upon the sale of an MLP security, the fund may be liable for previously deferred taxes which may increase expenses and lower the fund’s NAV. The potential tax benefits from investing in MLPs depend on them being treated as partnerships for federal income tax purposes. If the MLP is deemed to be a corporation then its income would be subject to federal taxation at the entity level, reducing the amount of cash available for distribution to the fund which could result in a reduction of the fund’s value. The index however is calculated without any deductions for taxes. As a result, the Fund’s after tax performance could differ significantly from the index even if the pretax performance of the Fund and the performance of the index are closely correlated.

Indices are unmanaged and do not include the effect of fees, expenses or sales charges. One cannot invest directly in an index. Index data source: Solactive AG.