1) Equitrans Midstream Corporation (ETRN), the general partner (GP) of EQGP Holdings, LP (EQGP), will acquire 100% ownership in EQGP and all of the incentive distribution rights (IDRs) and the economic GP interest in EQM Midstream Partners, LP (EQM) in a simplification transaction. After the transaction, which is expected to be completed in Q1 2019, EQM will be the only partnership under ETRN that will be publicly traded, and have no IDRs.

2) Western Gas Equity Partners, LP (WGP), the GP of Western Gas Partners, LP (WES), will acquire all units of WES, together with the units owned by its parent Anadarko Petroleum Corporation (APC). WES and WGP will become a single publicly traded partnership.

3) Williams (WMB) and Brazos Midstream announced a new strategic joint venture (JV) in the Permian Basin. Under the agreement, WMB will receive a 15% position in the partnership by contributing its existing Delaware Basin assets. Brazos will own the remaining 85% and operate the JV, which is estimated to have 260MMcf/d of natural gas processing and 75,000 barrels of oil storage.

Performance: Midstream MLPs, as measured by the Solactive MLP Infrastructure Index, fell by -1.4% on broad market weakness and lower oil prices. The index is down -3.5% since last November. (Source: Bloomberg)

Valuations: The Enterprise Value to EBITDA ratio (EV-to-EBITDA), which seeks to provide more color on the valuations of MLPs, fell -3.34% last month. Since November 2017, the EV-to-EBITDA ratio has fallen by approximately -0.88%. (Source: Bloomberg).

Crude Production: The Baker Hughes Rig Count rose last month to 1076 rigs, rising by 8 rigs from last month’s count of 1068 rigs. The rig count has more than doubled since its recent low point in May 2016 of 404 rigs. US production of crude oil rose to 11.700 mb/d in the last week of November compared to 11.200 mb/d at the end of October. (Source: Baker Hughes & EIA) 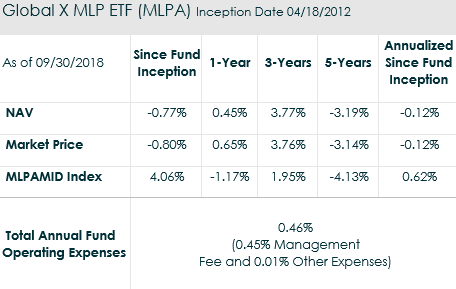 S&P 500 Energy Index: The S&P 500® Energy Index comprises those companies included in the S&P 500 that are classified as members of the GICS® energy sector.