1) News emerged that private company, Blue Racer Midstream, may be planning to launch an initial public offering (IPO), in which it could be valued at $2.5 billion. The potential for publicly listing the firm has increased after the market’s response to the Rattler Midstream, LP (RTLR) IPO last month which has been the biggest energy IPO of the year.

2) Occidental Petroleum Corp. (OXY) may be working with a financial advisor to seek a potential buyer for Western Midstream Partners (WES), the pipeline operator that OXY is set to acquire through its pending takeover of Anadarko Petroleum Corp. Anadarko owns a 55.5% stake in WES. OXY had stated it would be open to selling Western Midstream after the takeover of Anadarko.

3) The Organization of the Petroleum Exporting Countries (OPEC) has preliminarily agreed to extend oil production cuts for another nine months, until March 2020. OPEC has also entered an agreement with Russia, a non-member, but an important outside ally, to secure its cooperation in the context of the extended production cuts. The decision comes on the back of weaker oil prices, trade tensions, and geopolitical issues.

Performance: Midstream MLPs, as measured by the Solactive MLP Infrastructure Index, fell by -2.7% last month. The index is up 2.15% since last June. (Source: Bloomberg)

Valuations: The Enterprise Value to EBITDA ratio (EV-to-EBITDA), which seeks to provide more color on the valuations of MLPs, increased 1.6% last month. Since June 2018, the EV-to-EBITDA ratio has fallen by approximately -22%. (Source: Bloomberg). 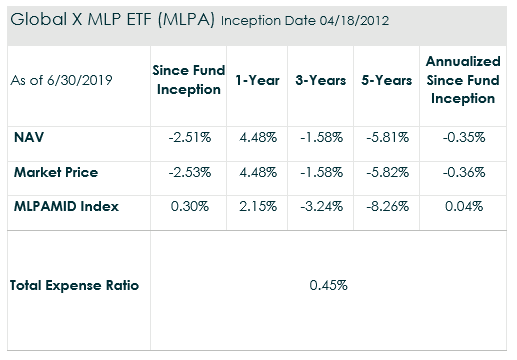 MLPX ETF and MLPA ETF do not have any holding in Occidental Petroleum Corp. (OXY) and Rattler Midstream, LP (RTLR).

The Solactive MLP & Energy Infrastructure Index: The Solactive MLP & Energy Infrastructure Index is intended to give investors a means of tracking the performance of MLPs and energy infrastructure corporations. Midstream energy infrastructure MLPs and corporations principally own and operate assets used in energy logistics, including, but not limited to, pipelines, storage facilities and other assets used in transporting, storing, gathering, and processing natural gas, natural gas liquids, crude oil or refined products. The index limits its exposure to partnerships in order to comply with applicable tax diversification rules. Securities must be publicly traded in the United States. The index is maintained by Solactive AG.

Carefully consider the Funds’ investment objectives, risk factors, charges, and expenses before investing. This and additional information can be found in the Funds’ summary and full prospectuses, which may be obtained by calling 1-888-GX-FUND-1 (1-888-493-8631), or by visiting www.globalxfunds.com. Read the prospectus carefully before investing.