Nuclear Energy and Uranium Moving Into the Mainstream

With aggressive timelines to reach net-zero carbon emissions and global energy consumption expected to increase by 50% through 2050, governments are exploring all options in the next generation of power production.1 While much of the focus has been on renewables like solar and wind, there may still be a critical role for nuclear energy in the global energy mix, given that it’s clean, reliable, and yes, safe. Importantly, nuclear power is gradually shedding the stigma attached to it, helped by significant improvements in technology and safety measures. And as it gains broader acceptance, we believe nuclear energy is raising the investment profile of uranium, its key fuel input.

Meeting the world’s growing power needs while simultaneously reducing carbon emissions presents difficult challenges for policymakers. Compounding the issue is finding ways to power the 55% percent of the world’s population living in dense urban areas.2 While proven renewables likes solar and wind are becoming increasingly economical, their larger footprint, intermittent power production, and difficulty in rapidly scaling requires other clean solutions to diversify the world’s energy mix. Nuclear energy may be the solution, as a clean, high output, and reliable power source.

Similar to solar and wind, nuclear fission reactors produce no greenhouse gas emissions during operation. But even when accounting for total carbon emissions (such as in the building of a nuclear power plant or solar panels) they have lower carbon emissions than many other renewables. 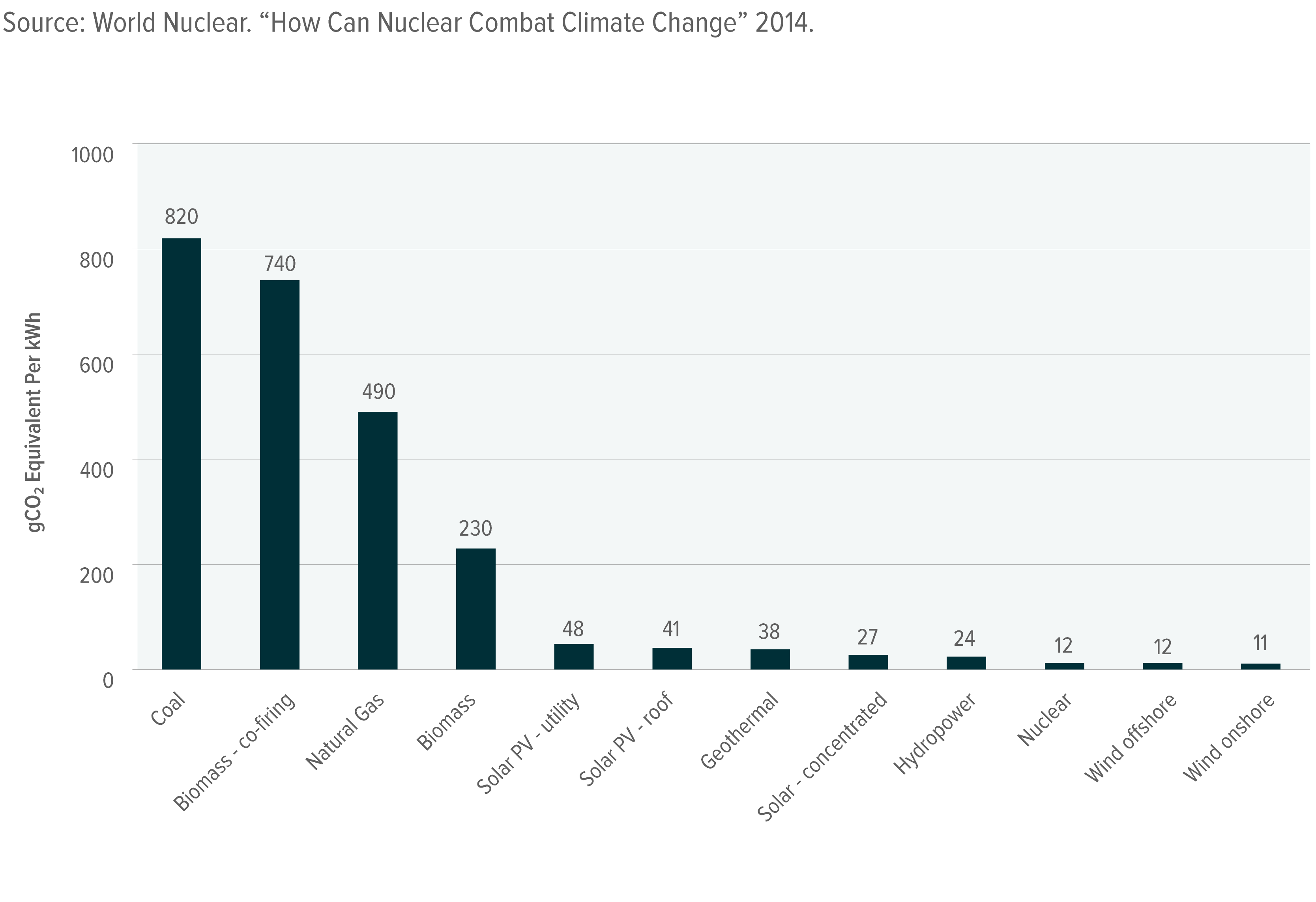 Nuclear is also more dependable than many other power sources. Renewables like solar and wind depend on variable climate conditions to power their panels and turbines, and at many points through the day and year may not produce much energy at all. The intermittent outages make it difficult for them to function as the sole provider of a nation’s power needs. Conversely, the U.S. Energy Information Administration (EIA) reports that nuclear operates at full capacity 93.5% of the time, making it the most reliable energy source by far. 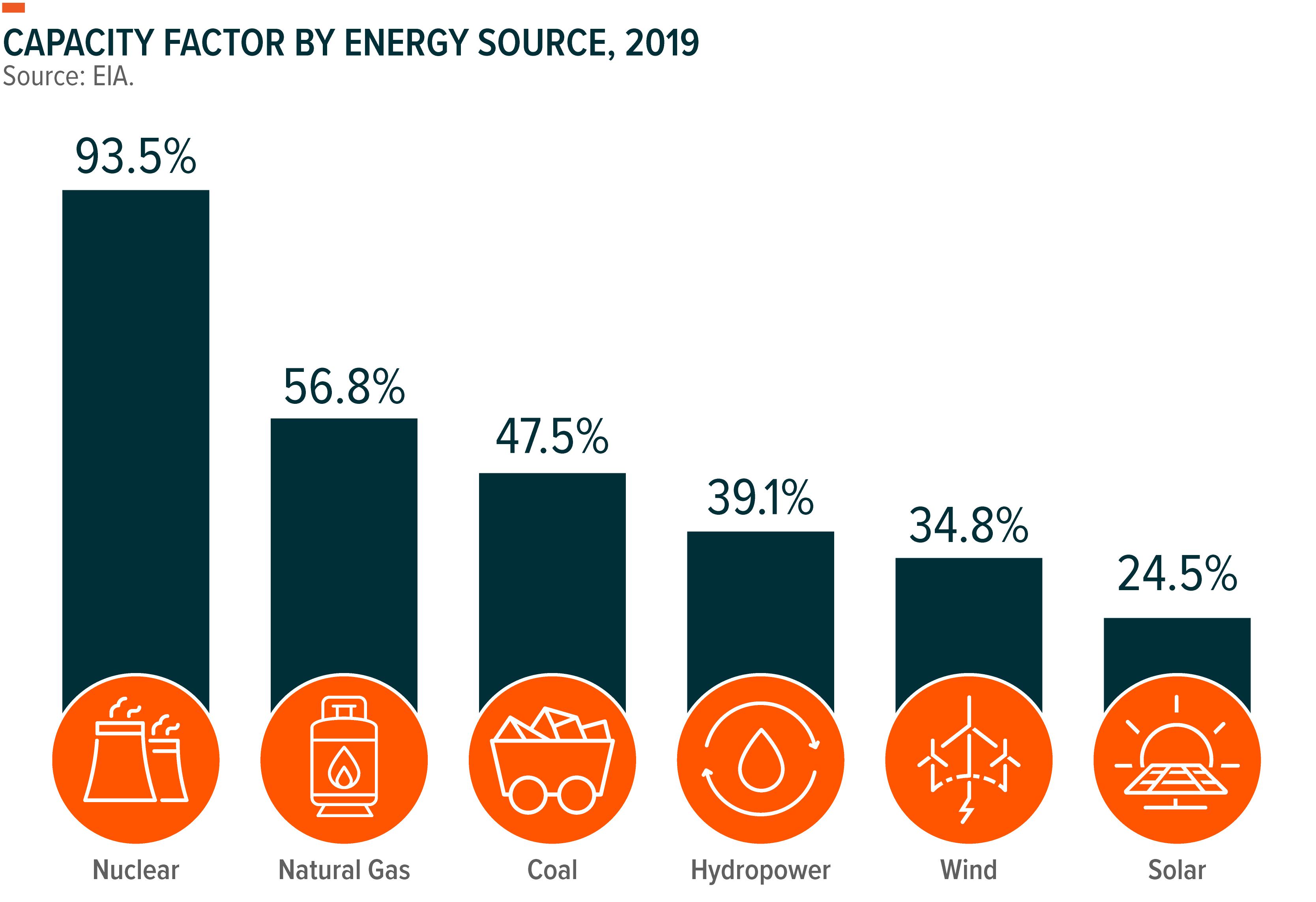 A primary benefit of the latest reactor technology is that they can be designed to meet specific end-user requirements, such as reducing water and waste usage. In addition, their upfront capital requirements are lower than traditional reactors in absolute terms, they can be compatible with other energy sources and they come with enhanced safety features.3

Small module reactors (SMRs) are the most prominent example of these new reactor types. SMRs have all the benefits of traditional nuclear power plants, but they require less planning and capital needs than their traditional counterparts, making them particularly suitable for smaller energy projects. The world’s first active SMR is a floating barge located in the Arctic that powers the Russian town of Pevek. It offers a glimpse of how SMR technology can be used, particularly in rural areas that rely on fossil fuels. Currently, there are more than 70 SMR designs at various stages of development in 17 countries. 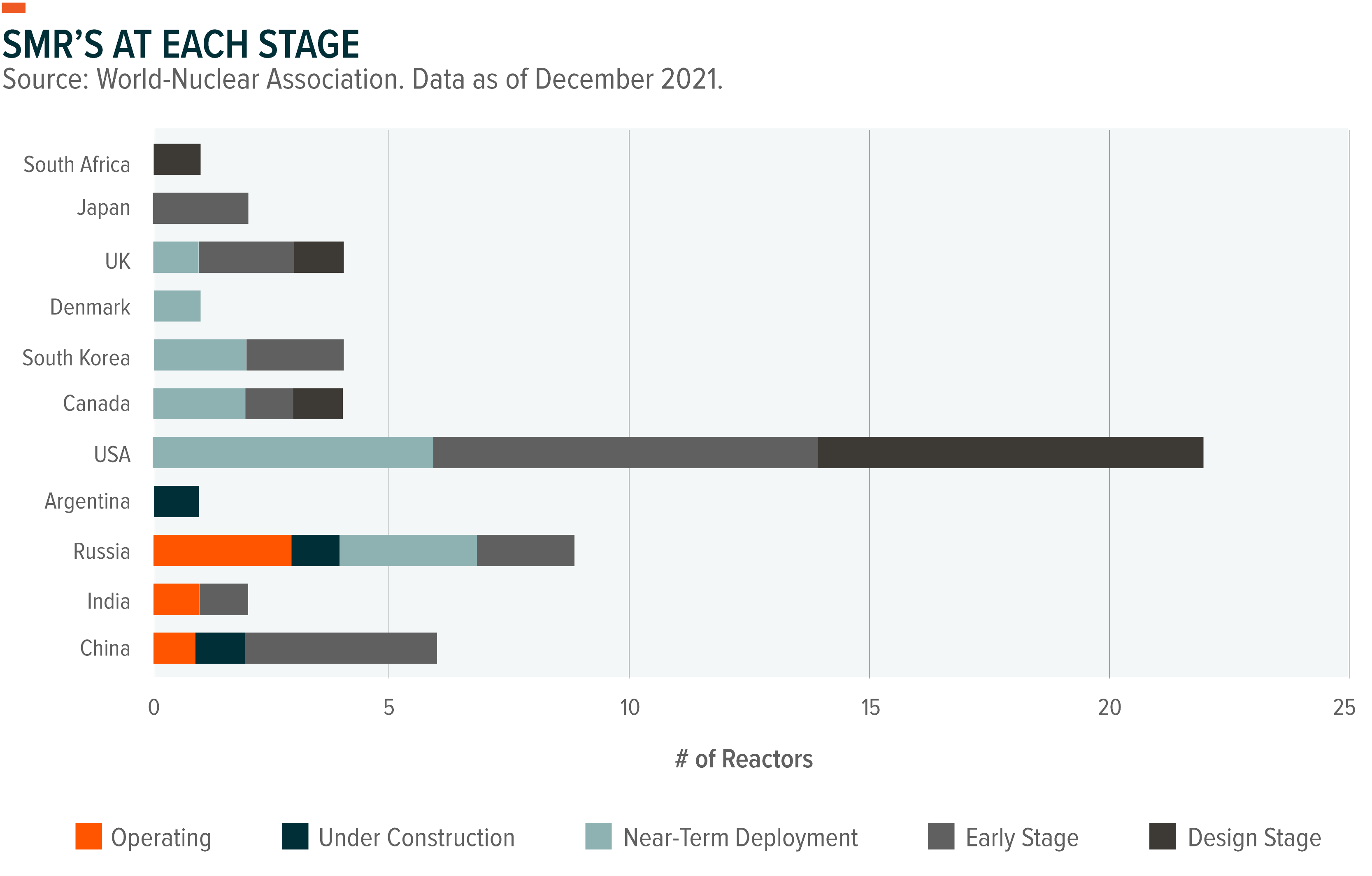 Extending the life cycle of an existing nuclear plant is another option for governments, as it’s significantly less capital-intensive than building a new one. Importantly, plants with lifetime extensions are also much more cost-competitive with low carbon-generating technologies. 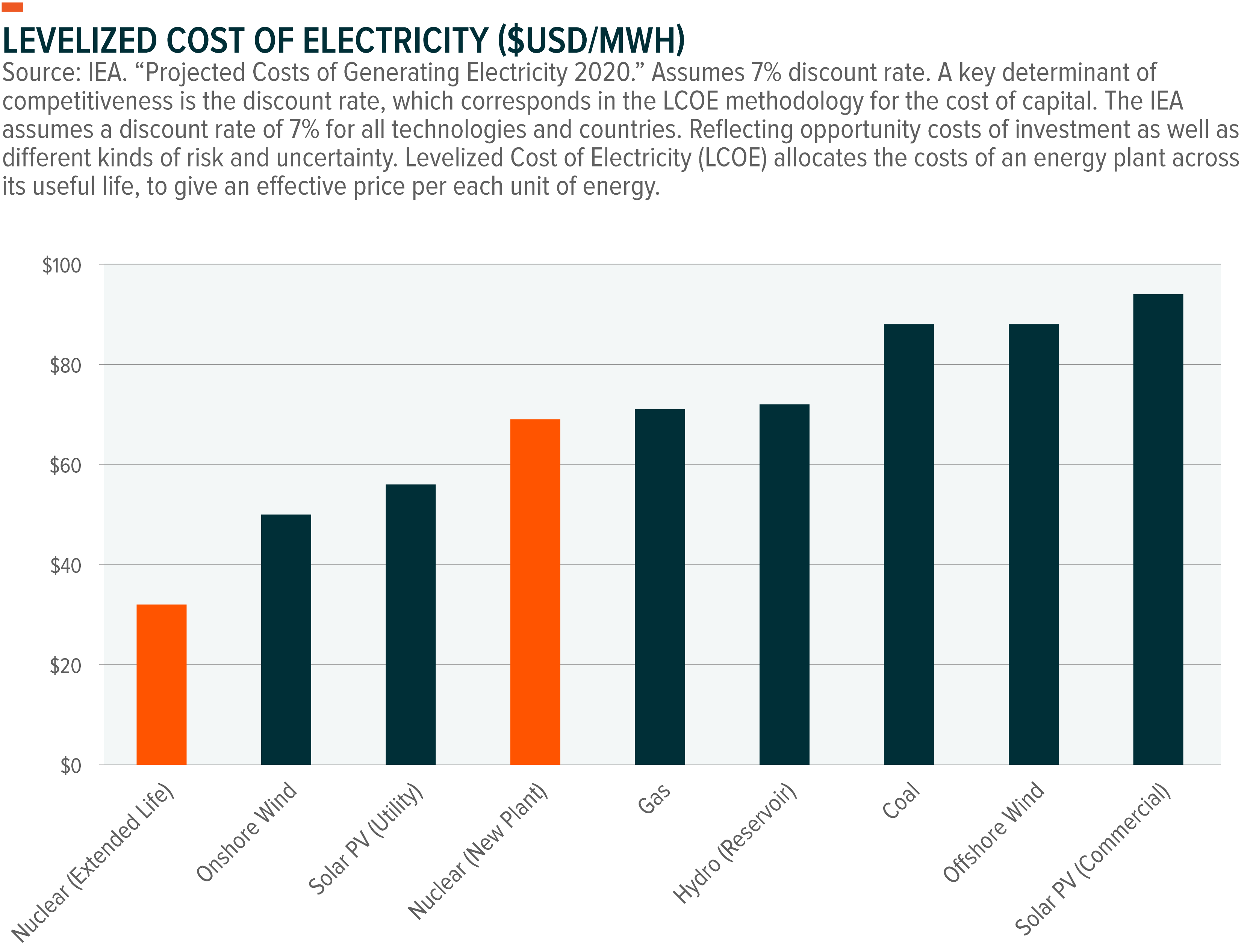 The U.S. has some of the oldest nuclear reactors in the world with an average age of 39 years. An estimated 90% of U.S. nuclear plants have received extensions to increase their operating life from 20 to 40 years over the last few decades. Recently, the Nuclear Regulatory Committee (NRC) started extending licenses and, giving plants a potential life cycle of 80 years. Over 20% of the U.S.’s nuclear reactors now plan to operate for up to 80 years. In December 2019, two nuclear reactor units in Florida were the first to be cleared by the NRC to operate for the 80-year life cycle.4

The pro-nuclear energy sentiment is even stronger in developing countries. Asia is a leading hub for new reactor construction. China has 18 traditional reactors under construction, India has six and South Korea has four. Globally, over 50 reactors are under construction in 19 different countries. With 445 reactors in operation around the world today, these new builds represent meaningful growth for nuclear power.5

Uranium provides the fuel to nuclear power plants. But many of the world’s largest uranium miners, including Cameco and Kazatomprom, tapered production or shuttered mines completely as the global economy came to a standstill at the start of the pandemic. These decisions flipped a deeply oversupplied market into one that quickly became undersupplied. Now with demand increasing, the supply deficit is unlikely to dissipate soon due to the uranium production cycle.

Unlike other commodities, uranium requires a longer and more extensive production timeline. Utilities must source uranium 12–24 months before its expected use. Producers like Cameco and Kazatomprom, which together represented 28% of global uranium production in 2020, are not expected to increase production for the next 1–2 years.6 That timeline suggests the earliest we can expect materially higher production output is between 2024 and 2026, which could provide support for higher prices.

The ETF market and institutional investors like hedge funds are also signaling bullish uranium price dynamics. Uranium is different from other energy commodities like oil and natural gas in that its futures market is relatively underdeveloped. Therefore, most investors do not seek exposure to uranium through the futures market, but rather through ETFs, individual equities or spot market purchases. As this graph shows, ETF flows for uranium accelerated rapidly in 2021 as investors sought exposure to the space amid the supply/demand imbalance. 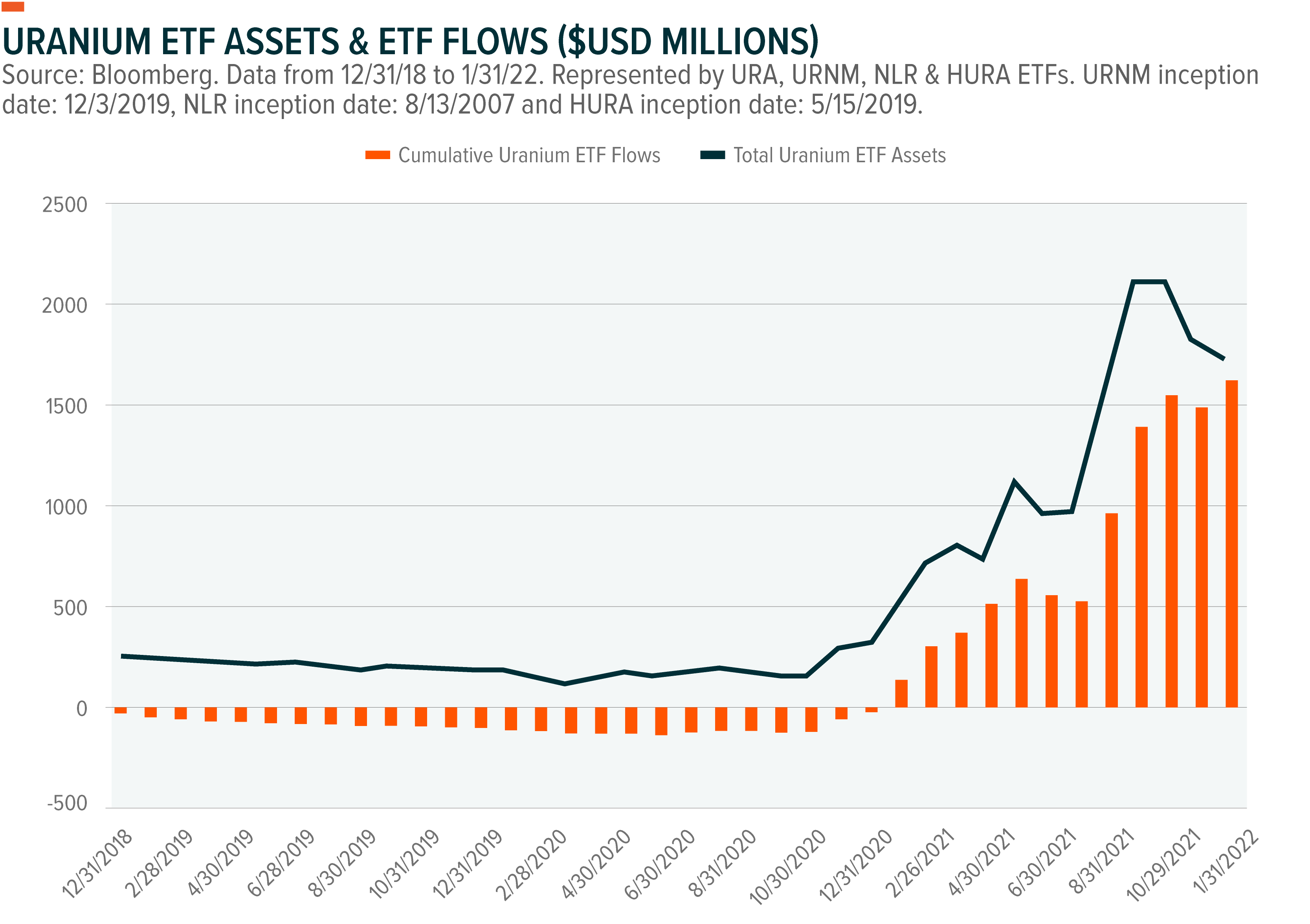 For non-institutional buyers like utilities, which need uranium for purposes other than an investment, buying activity in the physical market puts them in a tenuous position. For example, between July 2021 and December 20, 2021, a new physical uranium fund purchased approximately 44 million pounds of uranium, currently valued at approximately $2.0 billion.7 To put that 44 million pounds in perspective, global uranium demand is estimated to be approximately 180 million pounds for 2021.8 The fund’s purchases contributed to driving up spot prices from $32/lb to $45/lb from July 2nd to December 31st. The price spike is likely to force utilities to think about re-contracting sooner rather than later to avoid a major price impact. Utilities typically keep only 2–4 years of inventory on hand. If utilities wait to re-contract, they run the risk that prices go even higher from here and they are forced to pay even more. But a potential price drop could be beneficial to these utilities as well.

We believe that sustained political buy-in and financial support from governments means nuclear is here to stay, particularly as demand for clean and reliable energy grows. In 2021, a wider pool of investors brought significant attention to nuclear energy and the role it can play in helping the world achieve its climate change goals. They also shed light on uranium’s unique production timelines and price dynamics. Uranium prices jumping from $25 to $42 led to a 60% rise in uranium equities last year.9 If the current price rally persists, it could open the door for wider uranium inclusion in broader indexes like those that are market cap weighted indexes, potentially driving equity price expansion relative to current earnings.

URA: The Global X Uranium ETF (URA) provides investors access to a broad range of companies involved in uranium mining and the production of nuclear components, including those in extraction, refining, exploration, physical uranium buyers, or manufacturing of equipment for the uranium and nuclear industries. 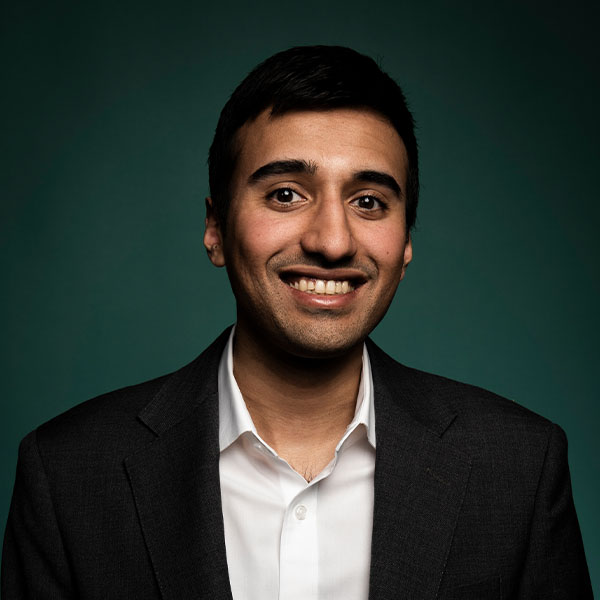 1. EIA Report. “EIA projects nearly 50% increase in world energy use by 2050, led by growth in renewables”

Index returns are for illustrative purposes only and do not represent actual fund performance. Index performance returns do not reflect any management fees, transaction costs or expenses. Indices are unmanaged and one cannot invest directly in an index. Past performance is not a guarantee of future results.