The world’s starting to turn its gaze offshore for power. Historically, onshore projects dominate the wind power sector’s project pipeline. Currently, 93% of global wind power capacity is onshore.1 However, better technology, lower costs, and more policy support for renewable energy are making offshore wind power attractive. These factors coupled with built-in advantages such as proximity to coastal demand centers can close the gap with onshore. With offshore wind capacity forecast to more than triple through 2027, we expect compelling investment opportunities to emerge across the wind power value chain, including renewables developers and wind power turbine manufacturers.2

Another advantage is that offshore projects can often be built much closer to high-demand electricity areas near major coastal cities. Looking at the geographically expansive United States, the strongest onshore wind resources are in the middle of the country, far from coastal cities with the highest electricity demand.4 Offshore wind power can reduce the need to build costly cross-regional transmission and distribution (T&D) infrastructure, which often face permitting challenges and can delay onshore wind power project timelines. In addition, offshore wind power projects can be beneficial in countries where land is scarce, such as Japan and South Korea. 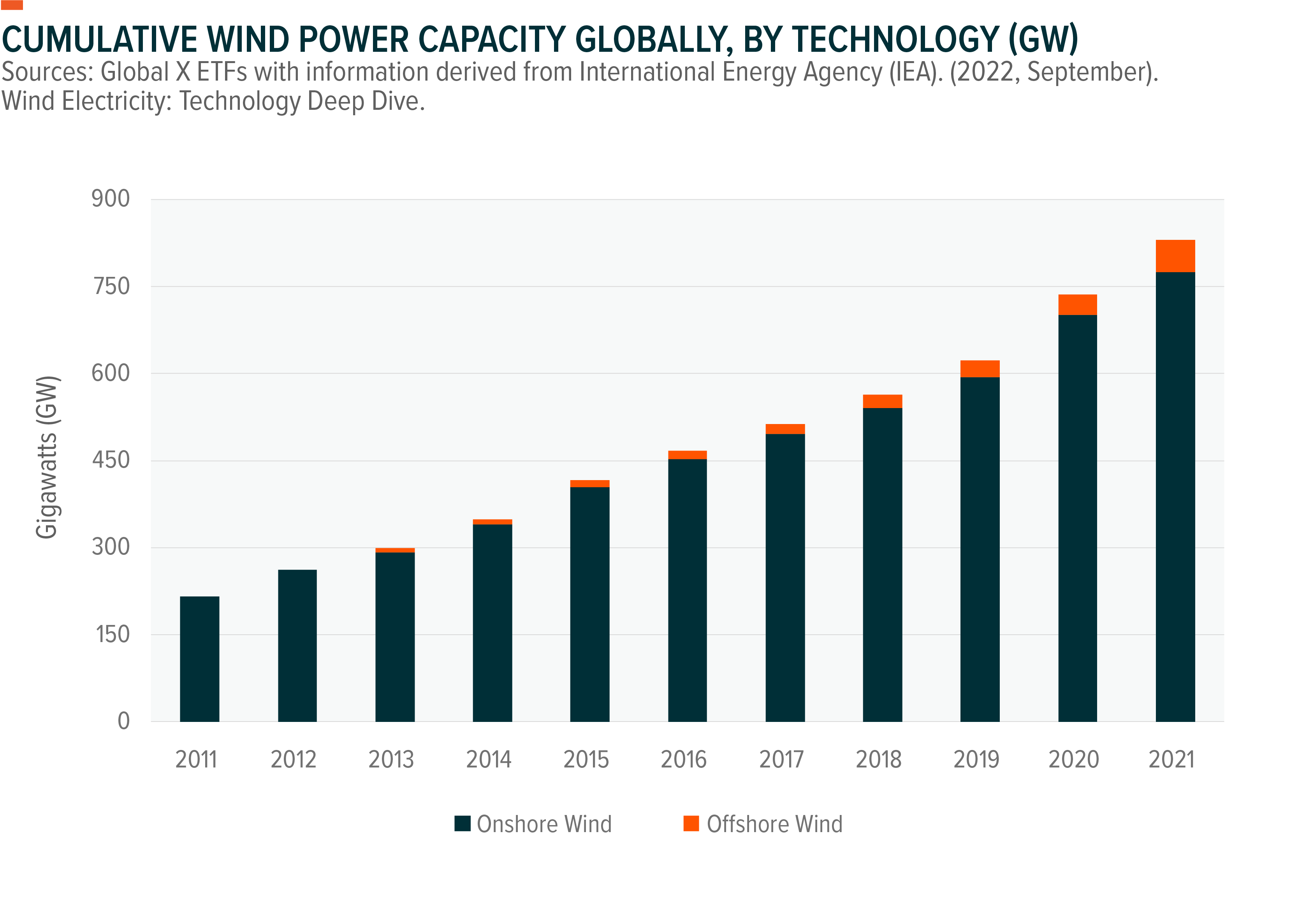 For these reasons, many national and sub-national governments around the world are ramping up policy support to develop offshore wind power projects through project tenders, wind lease area auctions, and financial incentives. The project pipeline totals nearly 320 gigawatts (GW) in potential project capacity.5 Over the medium term, global offshore wind capacity could increase by 3.5x from 50.6GW in 2021 to 177.5GW by 2027.6

Europe and Asia are the most mature markets in the offshore wind power industry, which is only about 20 countries strong, versus the 115 countries with established onshore systems.7 Many leading offshore wind equipment manufacturers and project developers are headquartered in these two regions, including Siemens Gamesa in Spain, Vestas and Ørsted in Denmark, and Nordex in Germany.

Despite their mature nature, the potential investment opportunity in the established offshore wind markets is significant. Germany, Denmark, Netherlands, and Belgium estimate that their joint offshore wind targets require at least €135 billion (~$146.5 billion) in total investments.8 In Asia, investments could reach $294 billion between 2026 and 2030 as countries race to hit 2030 capacity targets.9 The most offshore projects under construction are in China, the U.K., Taiwan, the Netherlands, Germany, and France.10 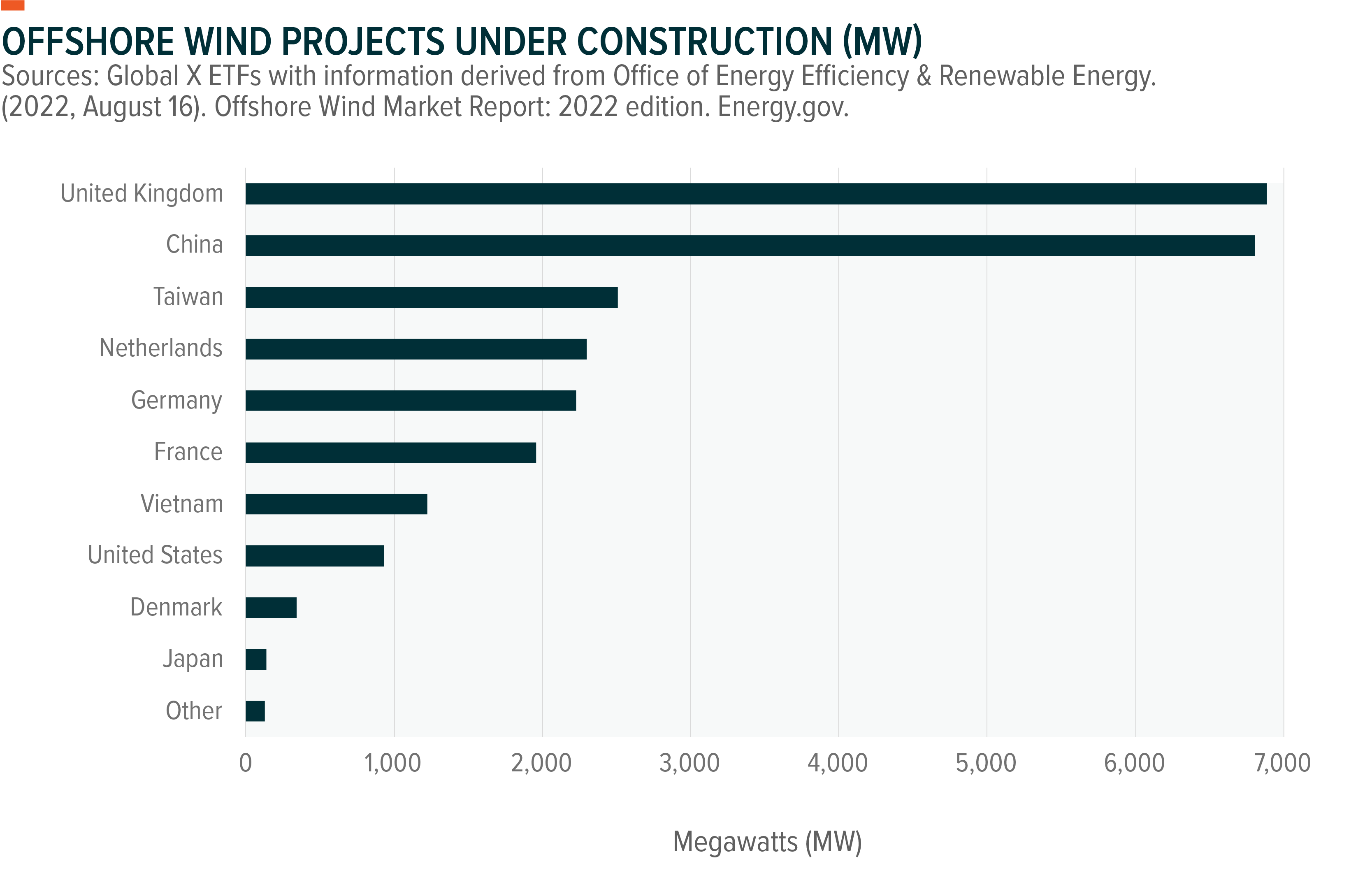 Strong policy support is a common thread in the development of the leading offshore wind markets. For example, national and sub-national governments in China have long-term capacity targets totaling more than 150GW of offshore wind, providing visibility and clear market signals even with the end of a national offshore wind power subsidy.11 For context, China’s installed offshore wind capacity totaled 25GW as of June 2022.12

We expect the industry’s global expansion, highlighted by the United States, Brazil, and India, could usher in a new era for the wind power industry, creating substantial opportunities for established players and newcomers alike. Many of these newcomers are following similar policy playbooks to support the development of their offshore wind markets.

The opportunities are significant for this nascent market. For example, a full buildout of underwater T&D infrastructure will be needed to connect the planned offshore wind projects to the coastal demand centers. With meaningful U.S. investment in such projects, wind power equipment manufacturers and project developers and companies in related companies throughout the shipping, ports, and infrastructure industries can benefit. 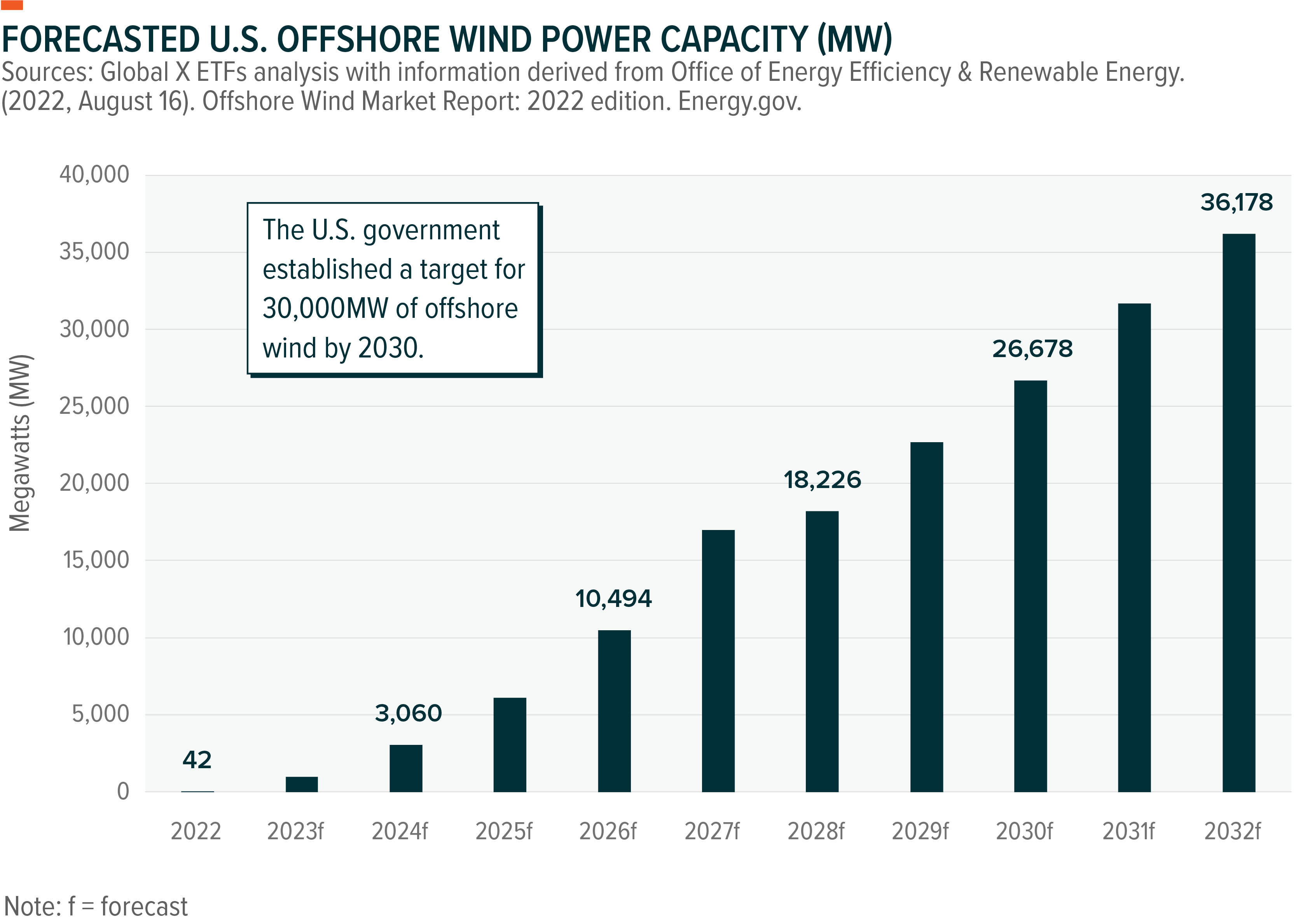 Supporting the positive growth outlook is that an increasing number of states are establishing targets and project tender auctions. Eight states have offshore wind capacity targets totaling over 44GW by 2040, and six have awarded tenders for projects.19 Ørsted, Eversource, Equinor, Avangrid, CIP, Shell, EDF, and BP are among the companies with projects expected to come online by 2030.20 While nearly all initial operational projects are planned along the East Coast, the Gulf of Mexico and Pacific Coast are rising areas of interest. 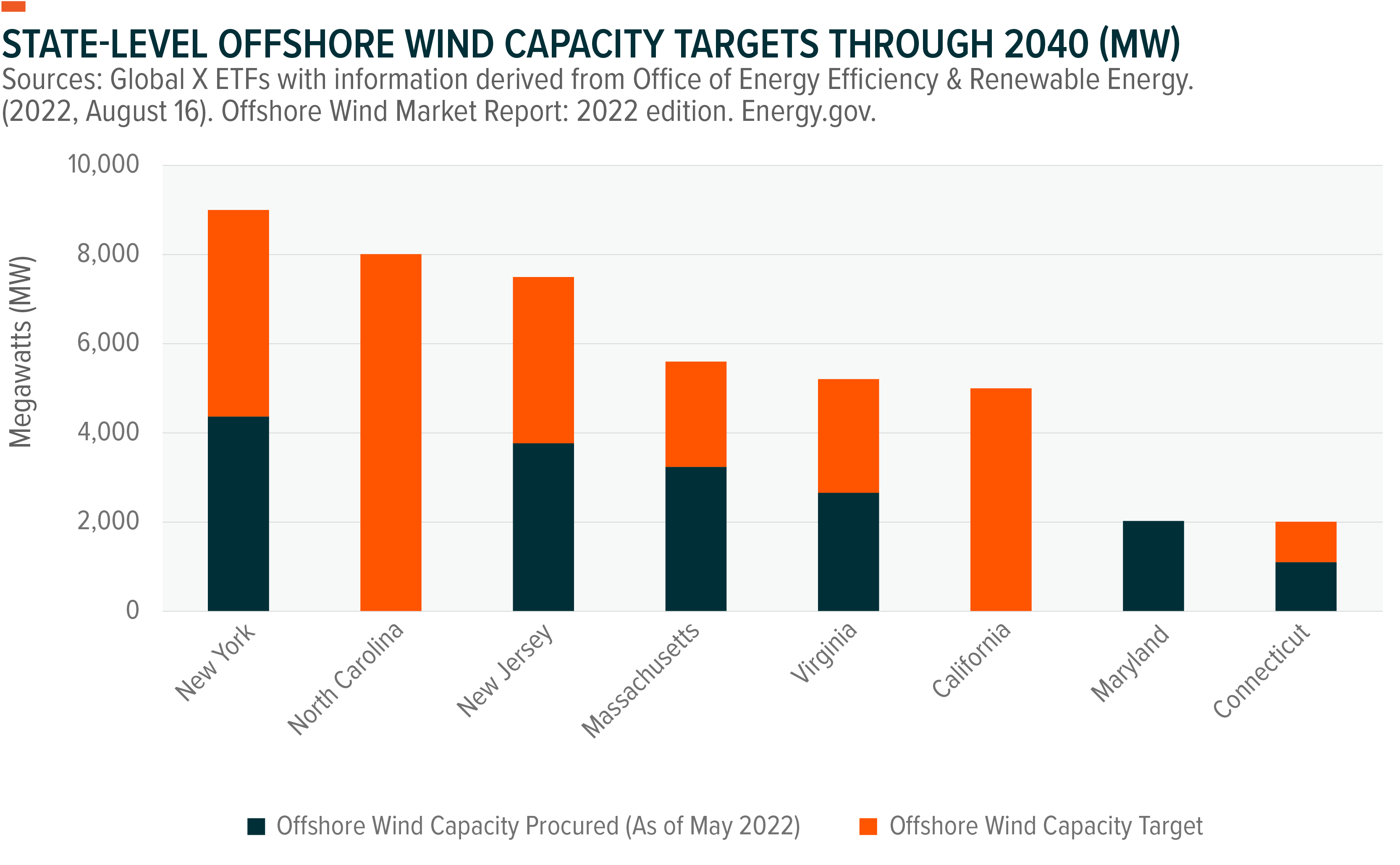 At the federal level, the Biden Administration made developing the wind power industry a priority. In 2021, the administration established a federal target of 30GW of offshore wind capacity by 2030.21 In 2022, the Bureau of Ocean Energy Management (BOEM) held successful offshore wind lease area auctions along the East Coast and the California coast, and BOEM is now finalizing plans for its first offshore wind lease area auction in the Gulf of Mexico. Additionally, BOEM’s ongoing efforts to streamline the permitting process, which has been a key obstacle for U.S. offshore wind power projects, can provide significant benefits.

Offshore wind power is trending as more countries turn towards offshore wind power systems to generate renewable energy. In our view, the expansion of this sub-sector within wind power, driven by public sector commitments combined with better technology and increasing cost competitiveness, can create compelling investment opportunities. As capacity increases and the industry matures, offshore wind equipment manufacturers and project developers can benefit, along with companies in related industries such as steel manufacturing, shipping, ports, and infrastructure. As governments increasingly set their sights on offshore wind power, we believe investors may want to as well. 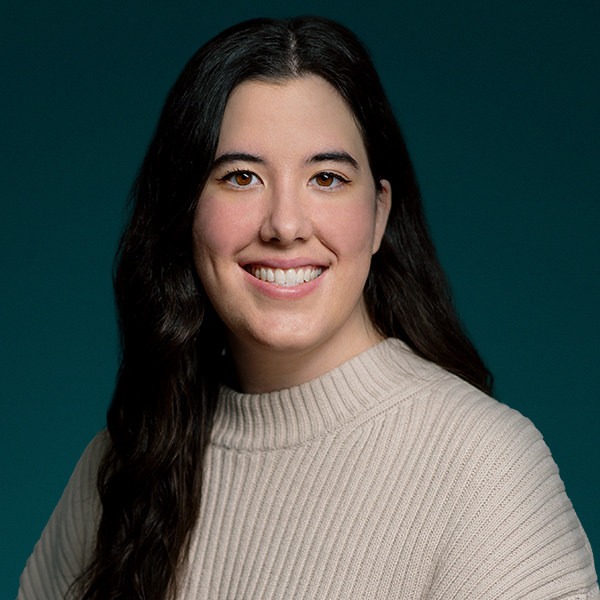 Investing involves risk, including the possible loss of principal. The investable universe of companies in which WNDY and CTEC may invest may be limited. Narrowly focused investments will be more susceptible to factors affecting that sector and subject to more volatility. Wind energy and cleantech companies may be highly dependent upon government subsidies, contracts with government entities, and the successful development of new and proprietary technologies. Seasonal weather conditions, fluctuations in the supply of and demand for energy products, changes in energy prices, and international political events may cause fluctuations in the performance of such companies. CleanTech Companies typically face intense competition, short product lifecycles and potentially rapid product obsolescence.  The value of securities issued by companies in the energy sector may decline for many reasons, including, without limitation, changes in energy prices; international politics; energy conservation; the success of exploration projects; natural disasters or other catastrophes; changes in exchange rates, interest rates, or economic conditions; changes in demand for energy products and services; and tax and other government regulatory policies. International investments may involve risk of capital loss from unfavorable fluctuation in currency values, from differences in generally accepted accounting principles or from social, economic or political instability in other nations. Emerging markets involve heightened risks related to the same factors as well as increased volatility and lower trading volume. WNDY, CTEC, and RNRG are non-diversified.

Investments in yieldcos involve risks that differ from investments in traditional operating companies, including risks related to the relationship between the yieldco and the company responsible for the formation of the yieldco. Yieldco securities can be affected by expectations of interest rates, investor sentiment towards yieldcos or the energy sector.

Yieldcos may distribute all or substantially all of the cash available for distribution, which may limit new acquisitions and future growth. Yieldcos may finance its growth strategy with debt, which may increase the yieldco’s leverage and the risks associated with the yieldco. The ability of a yieldco to maintain or grow its dividend distributions may depend on the entity’s ability to minimize its tax liabilities through the use of accelerated depreciation schedules, tax loss carryforwards, and tax incentives.

RNRG traded under the ticker YLCO from inception until February 1, 2021.