Social media’s rapid rise to dominating modern communication is astounding. In the early days, platforms aggressively courted new users to build network effects and scale, attracting ever more users in a virtuous cycle. Less than two decades after the launch of Facebook, social media users now total 3.8 billion across various platforms, amounting to 84% of the world’s population with internet access.1 And those users are spending an astounding 2 hours and 24 minutes per day watching videos, chatting with friends, and posting their thoughts.2 But with most of the internet-connected world already on social media, there simply aren’t many new users to attract to an established platform, forcing networks to consider new growth tactics.

Rather than looking for new users, social media platforms now focus on maximizing the revenue generated from each user. One way to do that is by selling more ads, for more dollars. Social media captures about 40% of total internet spending through selling targets ads to its user base, but is looking to win even more of the growing pie.3 Platforms are also developing innovative new technologies, such as integrating in-app purchases and cash transfers, enabling augmented and virtual reality experiences (AR/VR), and more, as they search for additional potential revenue streams.

With mobile connectivity and the ubiquity of social media, we can connect with virtually any person in the world, anywhere, at any time. Social media platforms enable endless opportunities to chat, share, watch, meet, read, and manage media content. Because of this engagement across vast user bases, established platforms can collect troves of data that is monetized to target ads at specific users. This revenue is then reinvested into the platforms, developing even better technology and drawing more user engagement.

Such a model creates significant barriers to entry, but occasionally new platforms break through, especially among younger generations. Among 18- to 29-year-olds in the US, 67% use Snapchat and 62% use Instagram, compared to less than 50% for any other generational cohort.4 For a newer entrant like ByteDance’s TikTok, Gen Z’ers represent approximately 60% of the platform’s user base.5

With user bases totaling hundreds of millions, if not billions, monetization is the new focus for the largest social media companies. User growth for major networks was 11% in 2019, whereas revenue grew 17%.6 The vast majority of this revenue comes from advertisers who are set to spend more on online platforms, and social media in particular, than traditional media, such as TV, radio, magazines, etc. 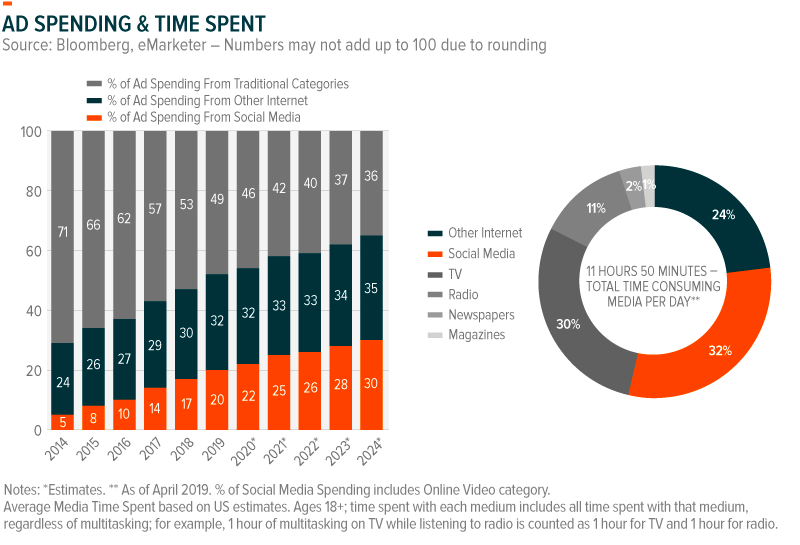 If such estimates prove accurate, the result will be greater average revenue per user (ARPU). ARPU is a function of the number of ads served, the price advertisers are willing to pay for each ad unit, and overall user engagement. Firm’s with higher ARPUs typically have active user bases that are engaging with substantial amounts of content on a regular basis. In addition, a high ARPU firm can deliver hyper-targeted advertisements across a range of formats. 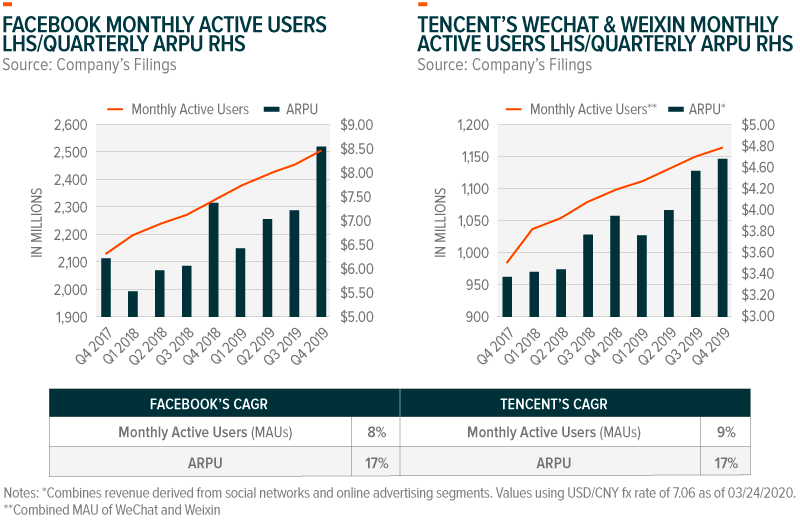 Looking Beyond Advertising For Future Growth

Green-field opportunities can help social media companies further monetize their user base while also diversifying their sources of revenue. Social commerce, or the intersection between social media and e-commerce, is one such avenue that platforms are exploring. Combining the visual and curated nature of social media with the ease of in-app purchases could help capture customers’ attention and reduce friction. For example, last year Facebook’s Instagram introduced in-app checkout, allowing Instagrammers to buy products without leaving the app.

Social commerce also works well alongside partnerships with influencers. Like celebrity endorsements in TV ads, influencers add a known face to marketing efforts and can sway consumer purchasing decisions. Among internet users in the US and UK, influencers directly impact the purchases of nearly 1 in 5 social media users.9 In 2020, brands are expected to pour over $10 billion into influencer marketing.10

Similarly, Tencent’s WeChat has plans to allow sellers to live-stream their products, allowing companies to connect with users through what is called online “shoppertainment.” Live-streaming provides a more realistic look at a product than a photo. Factor in advancements in augmented reality (AR) and virtual reality (VR), and these platforms could close the gap with certain brick and mortar shopping features. AR enables users “try” a product before buying it, seeing what it may look like in a room or on their digital avatar. Among many scenarios, users can virtually place a TV in their living room and choose the right size or, say, model different eyeglasses to make sure they fit their face perfectly.

As social media firms see slowing growth among their user bases, new techniques and technologies are being introduced to drive growth. Given the robust engagement across established platforms, advertising revenue is likely to continue to grow over time. Yet new in e-commerce and AR/VR offer green-field avenues of growth that could provide the next wave of growth for the industry.

SOCL: The Global X Social Media ETF seeks to provide investment results that correspond generally to the price and yield performance, before fees and expenses, of the Solactive Social Media Total Return Index.

EBIZ: The Global X E-commerce ETF seeks to track the Solactive E-commerce Index, which focuses on companies positioned to benefit from the increased adoption of e-commerce as a distribution model. This includes companies whose principal business is in operating e-commerce platforms, providing e-commerce software and services, and/or selling goods and services online.

Investing involves risk, including the possible loss of principal. International investments may involve risk of capital loss from unfavorable fluctuation in currency values, from differences in generally accepted accounting principles or from social, economic or political instability in other nations. Emerging markets involve heightened risks related to the same factors as well as increased volatility and lower trading volume. Narrowly focused investments and smaller companies typically exhibit higher volatility.The investable universe of companies in which the funds may invest may be limited. The funds are non-diversified.

Investing in securities engaged in the social media industry or Information Technology include disruption in service caused by hardware or software failure; interruptions or delays in service by third-parties; security breaches involving certain private sensitive, proprietary and confidential information managed and transmitted by social media companies; and privacy concerns and laws, evolving Internet regulation and other foreign or domestic regulations that may limit or otherwise affect the operations of such companies. E-commerce companies may be subject to rapid changes in technology, intense competition, rapid obsolescence of products and services, loss of intellectual property protections, evolving industry standards and frequent new product productions, and changes in business cycles and government regulation.