On Wednesday December 14th, the US Federal Reserve (“the Fed”) announced a rate hike of 25 basis points, bringing the range of the federal funds rate to 0.50% to 0.75%.1 The rate hike is the second in a decade and the first and only rate hike announcement in 2016. This is in stark contrast to guidance from the Fed in late 2015 in which its members foresaw four rate hikes occurring in 2016.

The Fed believes there will be three rate hikes in 2017, yet we are somewhat skeptical of this outlook as the Fed has consistently overestimated rate hike expectations over the last few years. In the chart below, we show the Fed’s year-ahead interest rate expectations based on the median “Fed Dot Plot” of Fed Open Market Committee (FOMC) members. For example, at the end of 2014, the median expectation of FOMC members was that by the end of 2015, short term interest rates would reach 1.13%. In reality, the Fed Funds Effective Rate at the end of 2015 was 0.24%. 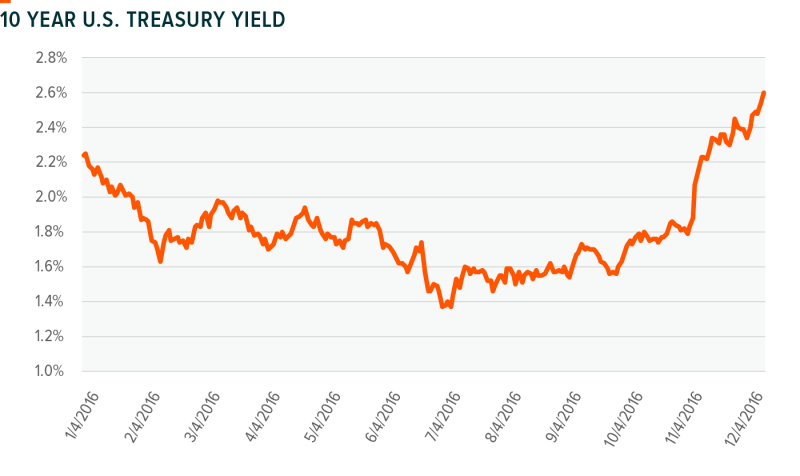 To put this increase in context, the 10 year treasury is now yielding 2.6%, which is virtually identical to its average yield since the beginning of 2008 and on par with the yields in 2013 and 2014. 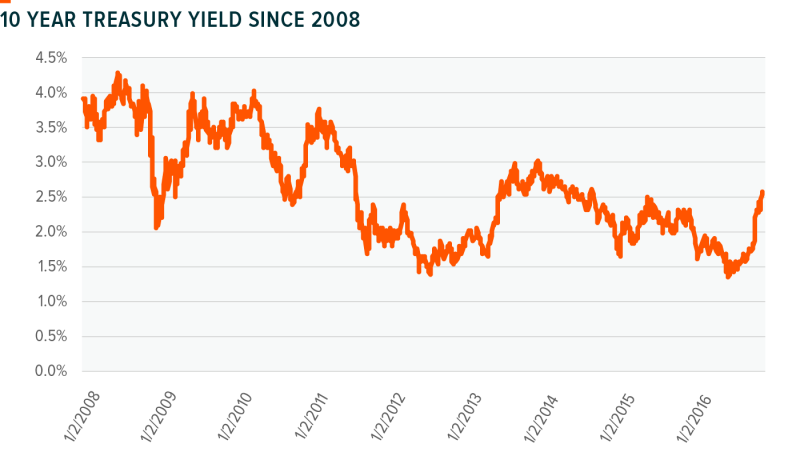 We have conducted research on the performance of high dividend payers in a rising rate environment and found that high dividend payers have performed well in environments where interest rates are increasing gradually. This relationship is due to the fact that high dividend payers exhibit value characteristics and tend to benefit from a strengthening economy with mild inflation, which is often the case when 10 year treasury yields are moderately increasing. Given that the Fed’s interest rate increase expectations remain gradual5 with three expected increases in 2017, their recent history with overestimating the speed of rate increases, and the fact that the 10 year treasury’s recent spike was more of a normalization to recent averages, we believe that high dividend and alternative income strategies can continue to perform well in this environment.

3.Excludes the MSCI SuperDividend EAFE ETF (EFAS), which does not have one year of history.

Investing involves risk, including the possible loss of principal. In addition to the normal risks associated with investing, international investments may involve risk of capital loss from unfavorable fluctuation in currency values, from differences in generally accepted accounting principles or from economic or political instability in other nations. Emerging markets involve heightened risks related to the same factors as well as increased volatility and lower trading volume.

Preferred stock is subject to many of the risks associated with debt securities, including interest rate risk. In addition, preferred stock may not pay a dividend, an issuer may suspend payment of dividends on preferred stock at any time, and in certain situations an issuer may call or redeem its preferred stock or convert it to common stock. High yielding stocks are often speculative, high risk investments. These companies can be paying out more than they can support and may reduce their dividends or stop paying dividends at any time, which could have a material adverse effect on the stock price of these companies and the Fund’s performance.

The potential benefits of investing in MLPs depend on them being treated as partnerships for federal income tax purposes. Further, if the MLP is deemed to be a corporation then its income would be subject to federal taxation at the entity level, reducing the amount of cash available for distributions to the fund which could result in a reduction of the fund’s value. The risks associated with real estate investment trusts including interest rate risk which may cause certain REIT holdings to decline in value if interest rates increase. REITs are subject to general risks related to real estate including default risk and the possibility of decreasing property values. Diversification does not prevent all investment loss. Real estate is highly sensitive to general and local economic conditions and developments, and characterized by intense competition and periodic overbuilding. Many real estate companies, including REITs, utilize leverage (and some may be highly leveraged), which increases risk and could adversely affect a real estate company’s operations and market value in periods of rising interest rates.

Shares are bought and sold at market price (not NAV) and are not individually redeemed from the Fund. Brokerage commissions will reduce returns. Global X NAVs are calculated using prices as of 4:00 PM Eastern Time. The market price is the Mid- Point between the Bid and Ask price as of the close of exchange.